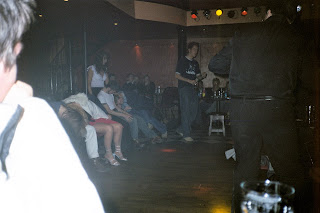 The Night I got Hypnotised?…by Richard Morrow in Bangor, Northern Ireland

In 2002 – 2003 while working in the local butchery at Steensons in Bangor, we would attract many a “local celebrity” customer, this included ex Northern Ireland World Cup star Billy Hamilton, ex- UVF hitman Gusty Spence, North Down Conservative Ulster Unionist MP Lady Sylvia Hermon, and perhaps oddly….Richard Morrow, a local hypnotist. He would come in once a week buying meat, he was well known in the area as having owned a Video and Game Shop as well as performing Magic and Hypnotism in local venues. One day he handed me a flier for his hypnotist show, which was to appear in The Windsor Bar upstairs just before Christmas 2002. Having done a post recently on The Windsor Bar, this memory came back. I hadn’t been upstairs in The Windsor in about 2 years (at the time) and was well up for going along, and in truth I wanted to be one of those who would be hypnotised. I managed to blag free entry from Richard and a free drink and I said I’d be up for being hypnotised and performing random things in front of the public. This was the day before it was due to happen. I cannot remember the exact date, but I would guess it was the last Friday night before Christmas 2002. I went along with trainee butcher Chris Stafford who worked with me at the time, I think possibly Emma Best and Garry Steenson, who was a manager at work also went along. We had a quick beer downstairs in The Windsor before going up to the nightclub for the big magic show. 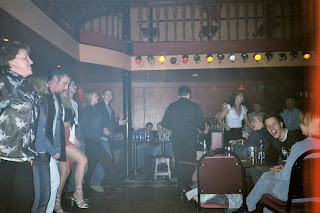 As I recall at the start Richard Morrow gave an introduction into the show, magic and hypnotism. He then invited random members of the public to come up, straight away I shouted out: Me!! And of course, Richard came over with the microphone and asked who I was and where I was from. “Jonny from Steensons Butchery” was my reply to a fairly full Windsor. And with that I was brought up on stage to the middle of what was once the nightclub dancefloor (Windsor Nightclub RIP) with 6 others as we became part of the act. Of course I had told Richard Morrow when he called into the shop that I would bring some friends if he got me free entry (which he did and I did). I also hinted I’d like to be one of those to be hypnotised, and knew I’d be gutted if I wasn’t chosen. There I was up on stage. Initial introduction speeches we did were asking things like “had we been hypnotised before, did we believe in hypnotism etc…” I had never been hypnotised, certainly didn’t believe in it, and on my only life opportunity to get my fortune told (on a hill in Niagara Canada, 2001) I turned it down, later writing a song with the line “I never got my fortune told, what that means I’ll never know.” But tonight I was about to be the subject of magic and hypnotism. It was 6 years ago, so the memory of the actual night occurring rather than the details of the hypnotism stands out more. I remember having to close my eyes and think of ridiculous things, led by Richard Morrow. 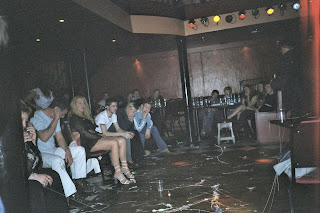 Basically the audience were being entertained and laughing at the participants, of which I was one. However I pretended to close my eyes, drift into a false sense of hypnotism and make strange comments regarding football throughout the show. I certainly wasn’t hypnotised. But I acted as if I was to make the show funny. There’s a few photos there, taken by Chris who remembered to snap me whilst “hypnotised.” Richard had us dancing round the dancefloor pretending we were hypnotised. I was on auto pilot and was dancing anyway. I assume the others were, including the girl next to me, whose breast I squeezed at one point. On the photos I’m at the far end near the pillar. The others on stage I never really got to meet or have a chat with sadly. As I recall I was back in work at 8 am the next morning, and didn’t prolong my stay in the club much after midnight. It was the nearest I’d ever been to being hypnotised and I’d do something similar again. I want to get my fortune told.

What was it? – The Richard Morrow Hypnotist Show

When Was It? – The last Friday before Christmas, December 2002

Where Was It? – Upstairs in The Windsor Nightclub, Quay Street, Bangor, Northern Ireland

Quotes on magic, hypnotism, the future etc. which I like –

“the future that you’ve got mapped out is nothing much to shout about”
“i look to the future it makes me cry”
“there’s something magic in the air”
“nobody knows the way its gonna be”
“what we dont see, well it can be real”
“they can come true, they can come true”
“nothing is real”
“i can feel your eyes all over my body”
“a valued destiny comes to nothing”
“tomorrow never knows what it doesn’t know too soon”

Some information on Richard Morrow: 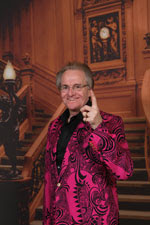 THE HYPNOTIC ACT of RICHARD MORROW
Over recent years there is no question that a new approach to the STAGE HYPNOTIST is sweeping the country – an amazing ice breaker at parties, and interaction for Wedding guests and corporate events alike.
Gone is the old fashioned boring hypnotist asking for quietness and taking the so-called MYSTIQUE seriously.
Enter Comedy Stage Hypnotist RICHARD MORROW, established entertainer and showman and comedian all in one.
He will immediately astound the audience by revealing (to the disgust of others in the profession) that during STAGE HYPNOSIS NO ONE IS ASLEEP!
Let the fun begin…

5 thoughts on “The Night I got Hypnotised?…by Richard Morrow in Bangor, Northern Ireland”