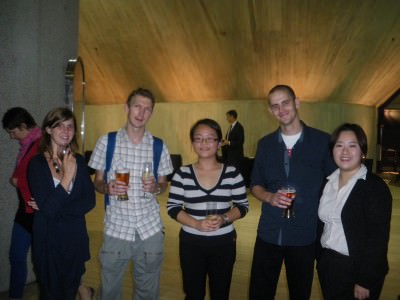 It was mid November 2009 and we were in our first few weeks in Parramatta, Australia where I worked in the awesome PJ Gallagher’s Irish Pub. We lived with Ruben and Rebecca. Rebecca was working for the local government in New South Wales. When she mentioned she was organising a public conference in the last week of November me and Daniel were both up for it, especially when we heard that it included FREE drinks and FREE food. All I needed was to have the night off work and the following morning off, as the conference was in Sydney. We also found out it was a gay rights lecture, hardly the type of thing I’d have jumped at the opportunity to attend. The free drink swung it and so it was.

All was sorted and in the run up to the “function” we knew very little about it, other than it was on a Monday night. I had to work the Monday day time in the pub, and finished work at 5 pm, the conference/function would start at 6 pm, so timing was tight. Rebecca told us the function was a Memorial Conference for John Marsden, a gay rights activist or politician. None of us had heard of him. We were given the address of 88 Castlereagh Street, Sydney. Castlereagh, by coincidence is also an area of Belfast, and indeed the Castlereagh Road in Belfast was round the corner from my Granny’s old flat off Mount Merrion Avenue. 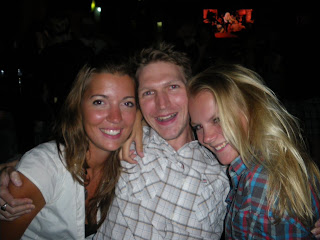 After work Daniel met me in the pub and we headed to Parramatta station and caught a rush hour train to Sydney Central. We got a return train for $6.20, assuming we would take the last train home that night. We arrived at 88 Castlereagh Street just after 6 pm, only to find it was a building of high security, we had to sign in and there was no sign of our flatmates Ruben or Rebecca, or indeed the John Marsden Memorial Lecture. 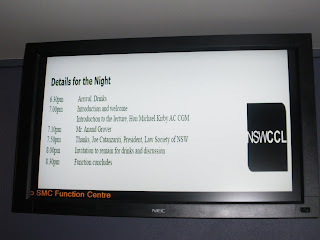 It turned out we had the wrong address and the function was actually on 267 Castlereagh Street so we had to backtrack on ourselves thanks to a phone call from Ruben. When we walked back and met him, it turned out the function was actually on a street on the corner with Castlereagh Street, hence the muddle up on the numbers earlier. It was being held inside the Masonic Lodge. In fact it wasn’t even number 88 of that street – it was 66 Goulburn Street on the corner of Castlereagh Street!! We got inside the swanky building and up the stairs. It reminded me of posh buildings in London I often used to visit when I worked in Public Relations. At any rate I was hungry and thirsty. 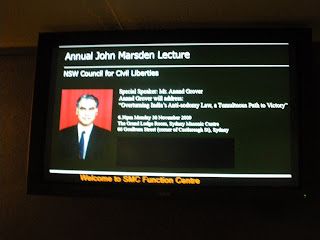 Alcohol in Australia is often free, it’s a bizarre experience. Every hostel and backpackers I’ve stayed in down under offers some kind of free alcohol offer, takes you into bars for free drinks and somehow they all still make money. At the top of the stairs we were greeted by Rebecca Yu (our Chinese flatmate from Shanghai) and two of her friends, another Shanghai lady and a French lady. We got briefly introduced but I dont remember all their names. It was straight over to the alcohol stand, where all drinks were free. I started with a glass of champagne and a VB beer. Daniel had a VB. We appeared to be the only ones drinking! The arrival time and drinks as listed on the agenda was 6.30 pm, with the actual meeting beginning at 7 pm. 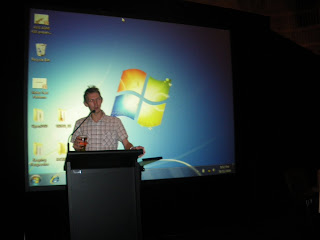 The food wasn’t great – there was no meat – but I made the most of the free salad, vegetables, nuts and crisps anyway. After mingling for around 30 minutes in the lobby, it was time to move into the main hall, a swanky room, where the 2009 Annual John Marsden Memorial Lecture could begin. The room was a vast conference hall, semi circular with a main stage in an almost parliament style interior. This was the grand lodge room. Silver stylish hexagonal pipes lined the roof and fancy wooden designs were scattered round the walls. It was a pleasant surrounding to be in – even if the lecture we were about to hear would bore the sunshine out of the average man. 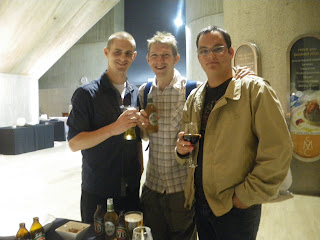 Daniel and I with Ruben at the Gay Rights Lecture

The introduction for the lecture was done by the honorable Michael Kirby. By 7.10 pm he had introduced Anand Grover, our main and guest speaker for the evening. The main topic for discussion was gay rights hardly something of interest to Daniel and I. Daniel and I did laugh at some of the speakers comments though. I filmed some of the lecture and snapped a few photos nonetheless, as well as trying to keep focused on the topics for discussion. Anand Grover mentioned how Uganda (and the prime minister for Trinidad) said there would sadly continue to be a death penalty for gays in those countries. We were sat at the back, behind Rebecca, Ruben and friends. We had finished our beer near the start of the lecture. 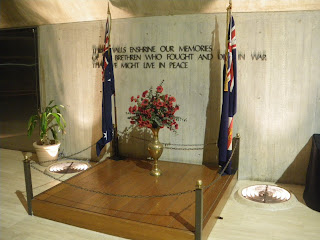 There was a question time afterwards where a few people asked a few questions of Anand Grover, an Indian guy. He also spoke about Singapore and Malaysia (both countries I visited on route to Australia) and how they are strict about gay people. Soon though the conference was over and it was back into the main lobby for drinks and food. Most of the crowd seemed to disperse at this point, ignoring the vast quantities of drink and food available. All the drink was completely FREE. Having not had many nights out in the previous month (since starting work at PJ Gallagher’s) I was going to milk these drinks! I tried Hahn Light for the first time, but found it to be a disgusting lager, one which I won’t drink again. So I moved back onto VB. Ruben had a glass of red wine. Then I stood by the war memorial, and took a few photographs of the buildings interior. Me and Daniel also took turns to sit in “the throne” a wooden chair inside the main hall as well as hopping up on stage for a fake speech. The microphone was still working so I briefly made a speech. 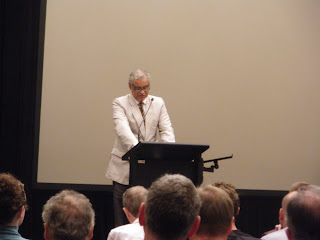 Just before the Chinese hospitality ladies took the drinks away, we grabbed a last VB. So basically we went to a gay rights conference just for the free drinks and free food!! The others headed home, but Daniel and I decided to make a night of it – given we were hardly ever in Sydney any more and I had the next day off work. So we headed to our old haunt – O’Malley’s Irish Pub in King’s Cross. We hadnt been in there for about a month, the final night in Sydney where I said goodbye to Natalja and with it, we left a few memories behind. It turned out to be a random night out. 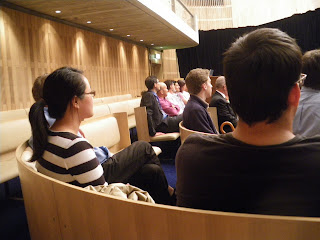 In O’Malley’s I noticed a guy was wearing a Northern Ireland shirt – so I had a wee chat with him – it was Paddy from Ballygomartin in Belfast. He was traveling with a pretty English lady. I sat at a table of ladies from Adelaide. I’m convinced this pub is the most random I’ve been in – you end up talking to everyone in there. I’ll go there again someday. I met an English guy who had lived in Australia for 8 years, plus an American guy who loved “Irish” people so he bought me a drink. Daniel and I were both mingling with randoms and moving from table to table. I sat down beside two German girls, one of them, Susan was born 4 days before me (the same date as my mate Michael McClelland). I checked her passport and she was indeed! She had been to Belfast before as well which was an extra coincidence. Next up we spoke to two very attractive Swedish ladies, whose names I forget. It was a decent night, but a throwback to old times when I drank too much. 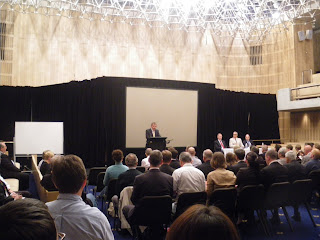 Daniel and I headed back on the first train in the morning around 5 am ish. The only problem was we fell asleep on that train and missed our stop (Parramatta) by 14 stops…or so. We ended up in Emu Plains and so had to get another train back home, before sleeping in the daytime in the Australian heat. It was a great night out, a random one, but these are the nights out I stopped for that Hungarian girl just a year earlier.

What was it? – The Annual John Marsden Memorial Lecture

Where was it? – The Masonic Centre, 66 Goulburn Street (corner of Castlereagh Street), Sydney

Who went? – Daniel Evans, Jonny Blair, Ruben Funai, Rebecca Yu and about 100 others.

Why we went? – Free drinks and free food