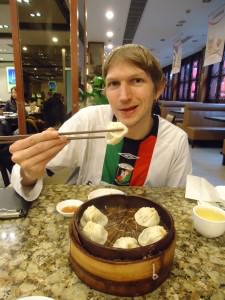 Today on Friday’s Featured Food I’ll talk about the Shanghai Dumplings, known as Xiaolongbao. Before I had been to Shanghai I had tried Xiaolongbao (Shanghai Dumplings) in places like Hong Kong and Taiwan. However to try them in the place they are from seems slightly more authentic and special so that’s what I did. So I heard about a great place in the Old Town (Nanshi) of Shanghai and headed there to see if they were actually any good. Believe it or not, despite having spent well over 2 years of my life living or travelling in Asia, I don’t really like Asian food! But these had to be tried. 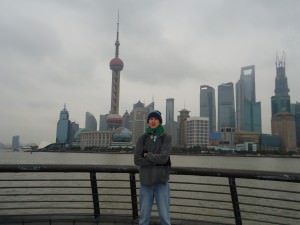 Admiring the Shanghai Skyline from The Bund, though I’m not much of a fan of this city.

Where to eat Shanghai Dumplings?

Shanghai Dumplings can be bought all over Asia so please don’t book a flight to Shanghai just to try them! Shanghai is not one of my favourite cities, and despite having been to it twice so far, I won’t rant and rave about it. Besides to see China properly you need to AVOID Shanghai and Beijing! However as I was in Shanghai it was a perfect chance to try them. I was touring the old town of Shanghai, which is known as the Nanshi. 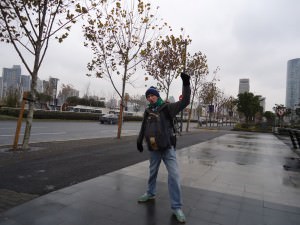 Backpacking in Shanghai…hungry for some Shanghai Dumplings!

What restaurant to try Shanghai Dumplings in?

How do you get to the Nan Xiang Steamed Bun Restaurant? 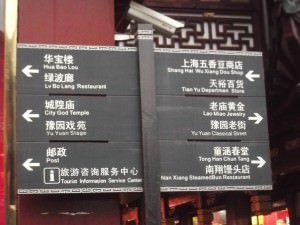 The Nan Xiang Steamed Bun Restaurant appears on the signpost – it’s on the bottom right.

It’s in the heart of the Old Town, wedged between a market and a square. Directions might get tricky but I’ve attached a photo of the entrance to this place. I have also attached a photo to the street sign for the restaurant – if it makes it onto a street sign, it must be good right?!

At the entrance to the Nan Xiang Steamed Bun Restaurant in Shanghai, China.

From the entrance door you head up the stairs. This restaurant is famous and popular. There were big queues and mostly Chinese, so it’s not like a tourist trap and you’re being ripped off, though it’s not a backpacker budget this restaurant! 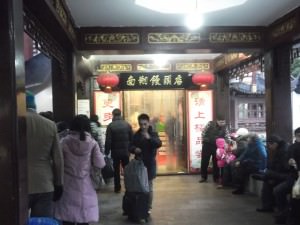 The entrance to the Nan Xiang steamed bun restaurant in Shanghai, China. The queue on the left is for takeaway.

Plus you can also just join the outdoor queue and get a takeaway – this will be cheaper but ultimately you’ll have to find somewhere to sit and eat it or face eating it on the move. Let’s be honest Shanghai is colossal and you’re better off having a sit down meal and spending a few extra RMB, well that’s what we thought! 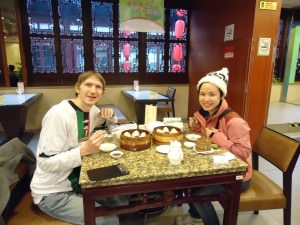 Myself and my girlfriend enjoying the Shanghai Dumplings in the old town of Shanghai in China.

What are Shanghai Dumplings?

They are Dumplings filled with soup and either vegetables, meat or fish. They are served in traditional baskets (same as the Cantonese Dim Sum) and on a base of cabbage leaf. I stuck to pork but also tried the shrimp and crab ones. There’s a wide selection and yes vegetarian too. I’ve attached a photo of the short menu to give you an idea of selection and prices. 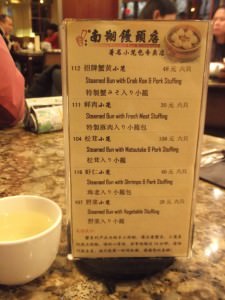 What else should you eat and drink with Shanghai Dumplings?

The menu is a big one so it’s up to you. We drank tea and I had a beer. For starters we had a soup which you drink out of a larger dumpling! (Picture below). We also had tofu on the side which was great! 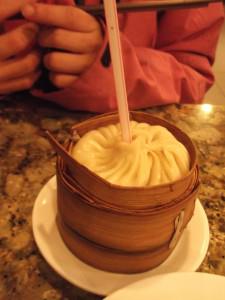 Drinking soup from a Shanghai Dumpling.

How much does it cost to try Xiaolongbao in Shanghai, China?

OK the news is good and bad! This is China so usually everything is cheap. However this restaurant is not quite as cheap as the local places in the suburbs so if you want to get Shanghai Dumplings really cheap – head somewhere local. We decided to do this one as we often treat ourselves and spend a bit more. It was our last meal in China last year so we wanted to have a more special one – and this place is worth it. 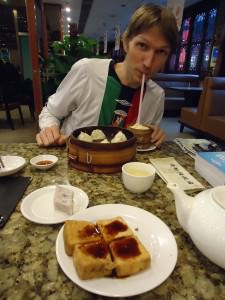 Although Shanghai is an expensive city by China’s standards this is still cheap when you compare it to places like Italy, Australia, England and Canada. In the Nan Xiang Steamed Bun Restaurant, our bill came to 235 RMB, which is about $38 US – and this was a big meal for 2 in a decent restaurant including drinks! That’s $19 US per person, but we ate a lot and had drinks. If you avoid the drinks and don’t eat too much, you’ll get a good feed of Shanghai Dumplings for between $5 and $10 US. 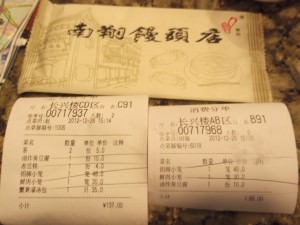 Our bill for the Shanghai Dumplings in Nan Xiang Steamed Bun restaurant.

And Finally…You want to know the truth?

I’d rather have had baked beans and cheese on toast or an Ulster Fry! I’m a travelling Northern Irishman, and that my friends, won’t change!

Here’s a video of me trying Shanghai Dumplings in the Nan Xiang Steamed Bun Restaurant:

Friday’s Featured Food is an ongoing regular feature on Don’t Stop Living – a lifestyle of travel. If you have a meal, bar, pub, restaurant, brand or idea that you would like reviewed or featured on Friday’s Featured Food, please get in touch via my contacts page or my advertising page. I’d love to hear from you! I’d also love a free pint and a meal, or a coconut juice, or even lunch in China. Cheers!