Crazy stuff time. This is an old gem of a memory which still has me and my mates talking about it, and me blogging about it some NINE years later.

We’re warped back to the end of January 2005. I was living in Bournemouth in England at the time but we were on a crazy trip north to Leeds. The culmination of which would be to watch Bournemouth play Burnley at Turf Moor on the Saturday in the FA Cup. Drinking began in earnest at 7am on the Friday morning. We all had the weekend off work, including the Friday.

Living in England, I was a master of the cheap bus tickets at the time. Me and my mates used to head to London, Leeds, Colchester, Birmingham, Manchester and a load of other places all on a cheap Megabus. Megabus only started around 2004 time and they started by advertising tickets for ONE POUND. Our trip to Leeds would cost us TWO QUID. First we boarded a ONE POUND Megabus in Bournemouth at 7am, then we met up with another mate in London for a day out. Then we headed on a ONE POUND Megabus north to Leeds at 7pm.

We had done our fair share of London pubs during the day time, including the Urban Bar in Whitechapel, the Shed Bar at Chelsea’s Stamford Bridge and Molly O’Grady’s at Victoria. As our hot and stuffy Megabus steamed out of Victoria station in London, we were bound for Leeds…

We had the foresight to bring some beer and cider on board. It was a packed Megabus. It was pouring outside and cold. Inside it was hot and steamy. There were a mix of business men, kids, students, London commuters and drinkers. After 30 minutes we had ran out of beer. There were four of us – myself, Neil, Austin and James. Austin had in his bag a 3 Litre bottle of cider. That was the only entertainment we had for the 4-5 hour bus ride. But no way was Austin parting with it.

These were the days before you had music on your phone, video on the go, wi-fi on buses and even cups of coffee on board weren’t yet trendy. We provided the entire bus with an evening of entertainment. Well, it was a double decker bus and we were top deck. It was only the top deck that was to be entertained.

Bored and having drank all day, James and I sat together pondering whether it was best just to sleep all the way to Leeds then hit the pubs when we arrived. We were checked into some decent 3 star for the night. Then Neil grabs the 3 Litre bottle of Cider off Austin and says he wants to pay for half of it. Since it’s the only bottle of alcohol on the entire bus, Austin says no and wants it all to himself. We reckon he was playing devil’s advocate with a tongue in cheek. But who was to know. 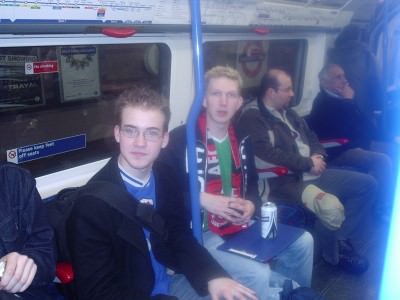 Other people on the bus began to watch as Austin and Neil had a war of words over the said bottle. At the time James and I would have been fairly happy for the pair of them to split the bottle and drink to their hearts content. Neil then gives Austin a challenge, or gives himself a challenge. From Austin refusing to take a pound fifty off Neil for half the bottle, it transpires that Austin has now had enough of the argument and wants to shut Neil up. He bets him TEN QUID that he can’t finish the entire bottle in 90 seconds.

So the bet is:

– Neil gets to get drink as much as he can in ONE sip and if he can’t finish the bottle in one sip, he owes Austin TEN QUID. Austin gets to drink the remainder of the bottle too.
– If Neil finished the entire 3 Litre Bottle of Cide in ONE sip, then Austin owes him TEN QUID. Austin also ends up with ZERO cider.

You’d think given the odds and the fact that it had to be done in one sip, coupled with the fact we had all been drinking since 7am that day, that Austin would come out smelling of roses while Neil sulks in the corner. Enter Millwall Neil.

With a load of eager watchers on the bus, Neil bursts open the bottle of cider and in “Eye of the Tiger” style, “Cream of the Fight” vigour he faces up to the challenge of his rival. One rule we add is that nobody else can touch the bottle while Neil is drinking – otherwise Austin could grab it off him and the cider would go everywhere on the bus. We wanted to entertain in a civil yet crazy way.

James and I have the timers on as Austin watches in disbelief. Neil, like a man possessed and up for the challenge necks the entire bottle in less than 90 seconds (well less if we remember right!). Buoyed on by youths, students and business men on the bus, Neil is the hero of the bus. He sank it!

That’s 3 Litres of Cider on a packed Megabus to Leeds on a Friday night in just over a minute. Completely crazy.

Neil is so drunk he can’t even bring the energy to be sick despite a toilet visit. He sits back down, konks out and remembers NOTHING of the rest of the night.

Meanwhile, me and the other three boys, hop off the bus, head to our hotel to check in, checking Neil is OK the entire way and we somehow get him in past the bouncers of Jumpin Jaks nightclub in Leeds. This was hilarious in itself as Neil at the time worked in another Jumpin Jaks!! Once inside Neil perches himself by a pillar and basically is there comatose the rest of the night. James, Austin and I partied all night in complete stitches at Neil’s act of craziness. Out of the four of us, in general, Neil was easily the most sensible at and yet here he was, smashed beyond belief in Leeds!!

After that heavy night, I wake Neil up early morning for a fry up and tell him of the previous night’s mental ness.

It was all so crazy, we were all so young…good times lads! 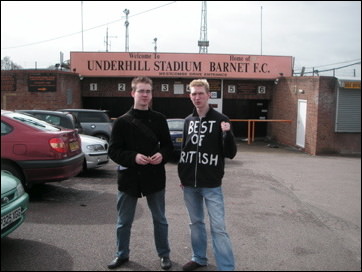 My best mate Neil and I at Underhill, home of Barnet FC in London. The guy who drank 3litres of cider in 90 seconds!