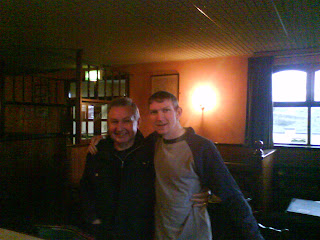 I’m always intrigued by pubs and drinking locations that are just that wee bit different, hence why brand name pubs such as Yateses and Wankabout (really called Walkabout) actually annoy me – they clone custom made pubs, and lack character. Pubs with history, facts or just something a bit extra ordinary are much more up my street. So I’ll cast my mind back to the year 2000, when my mate Chris Ragg (who I used to called “Chisel Massachussets” for no reason other than it sounds nuts) lived and worked in Londonderry. Often I would visit him on my days/holidays off work. I began to love Londonderry as my “within Northern Ireland getaway location” and Chisel used to live at Eglington, near a pub called “The Happy Landing.” Sometimes when I stayed with him I would get the Bangor – Londonderry train, other times I would drive up. When you drive from Belfast to Londonderry you have two main routes – one is via Ballymena and Coleraine, the other is through the Sperrin Mountains and the part of Northern Ireland known as The Glenshane Pass. The Glenshane Pass is beautiful countryside and a nice drive, and so during the year 2000 any time I visited Chisel, I would go via Glenshane, and as Chisel once pointed out to me on one of our drives “That’s The Ponderosa – that is Ireland’s highest pub!!” Of course I was always fascinated and intrigued, but I never went in for a pint… 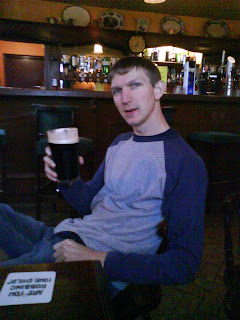 For a start I was normally driving, and often on my own so I never felt the need to stop off and pop in for a pint. Secondly the pub is at a corner point between Maghera and Dungiven and when you’re on a roll in the car, you want to keep driving, not stop out of total inconvenience. I continued to visit Chisel in Londonderry during most of 2000 and also in 2001, we popped up a few times, on one occassion staying with Ania, Elsa, Sebastian and Paul (4 of Chisel’s mates who lived near Shantallow) and then in 2002 I went from Bangor to Prehen with my mate Darren Latimer and we were staying up there one night and going till the Oasis concert in Prehen playing fields. We drove up via The Glenshane Pass and The Ponderosa and I pointed the pub out to Darren on the way up, stating I’d gone past it manys a time and never stop; but wanted to sometime. Darren was up for seeing it though and we both wanted the honour of having a pint in Ireland’s Highest Pub (that’s the HIGHEST LOCATED pub in the entire island, not just Northern Ireland – although this fact is often disputed…). So the day after the Oasis concert in September 2002, Darren and I stopped off and had a pint in The Ponderosa pub! I was driving so could only have one anyway and that’s all we had before heading home. 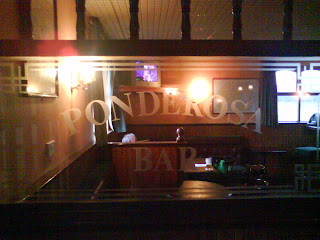 Then this week I was up touring a wee bit of the north coast with my Dad, who had never been in The Ponderosa, so I said “why don’t we come home via The Ponderosa and stop off for a pint?” Also bizarrely a few weeks ago I was in Bluewater Shopping Centre in Kent and came across a book called “Britain’s Strangest Pubs”, which I bought on Impulse in a shop called “Hawkin’s Bazaar.” And in that book was…The Ponderosa, which reminded me of it, so I decided another visit to this excellent pub was in order and yesterday me and my Dad did Ireland’s highest pub! For me, a second time, for my Dad the first time he had been in it, yet he had driven past manys a time. ON a quiet Thursday afternoon we decided to stop off at The Ponderosa. 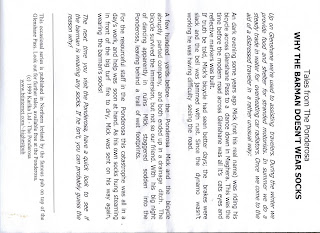 The Ponderosa is a lonely pub, the only civilisation you’ll see for a few miles, a potential “nearest port of call” during the 1970s and 1980s, when Northern Ireland had major troubles, and using a phone box to call the peelers (Police), in a breakdown or emergency it really is all alone in The Sperrin mountains. It stands in an enclave at the height of 946.81 feet above sea level. The remote location of the pub makes it cold, worn and unique. It has not been refurbished since my first visit in 2002 until this visit in 2008, but the argument should really be that it doesn’t need to be – the actual decor of the pub is not as important as its rare location, wonderful view, stand out character and the claim of being Ireland’s Highest Pub. On my first visit in 2002, Darren and I had a quick beer and the bar was busy, it was a Sunday afternoon and we didn’t have time to hang around, chat or discover any secrets or stories about the bar itself. I’m sure there’s a lot of stories through the years, and on talking to the landlord and bar man John, he worked his way through a few very intriguing stories, some of which have actually made it onto the pub’s frequent “newsletters” or series of “Tales from The Ponderosa”, a copy of which I picked up on my visit. 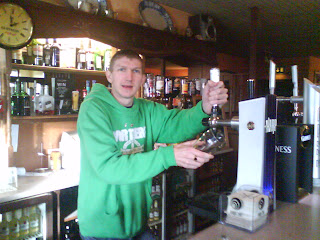 I’ll not run through all the stories that John told me and my Dad in the bar as there are many and he is a man of wisdom, having spent a lot of his working life travelling, and indeed ending up in places as sublime as Brazilian rainforests and Peruvian countryside…one of the stories was that of a posh Bangor woman who happened to enter the pub one night. Not searching for a pint of Guinness, this rather poshly spoken lady had just ran over a sheep in her car, on the country road and it was causing an obstruction, so the local peelers (RUC) needed informed. The Ponderosa is, or at the time of this story was, situated almost exactly half way between two RUC Peeler Stations/Districts and therefore there was always the question of who to contact in an emergency, which one? A first call to the one in Dungiven was welcomed with a “can you check which side of the road the sheep is on?” The landlord, looking out the window then said that it was on the other side of the road and heading down towards Maghera…”Ah then you need the other Police Station” said the peeler, so the Landlord had to contact the peelers at Maghera, while the lady waited on starting her car up and driving home, finally the peelers arrived and kicked the sheep over to the side of the road before driving off… 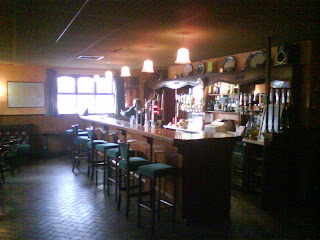 John the landlord also revealed that day to day life working in the Ponderosa is unpredictable, spontaneous and surprising, that you could go one day and only see and serve less than ten people, enjoying conversation with them all, or you could be sitting doing nothing with an empty bar when suddenly a coach load of American tourists arrive in, all wanting a pint of Guinness in Ireland’s Highest Pub. Having been the landlord for over 20 years, John clearly enjoys that uncertain element of the job and life in The Ponderosa, a pub where in all honesty…the world seems to stop as you sit sipping a pint in Northern Irish wilderness. I cant remember what the pint of choice for me and Darren was back in September 2002, probably Harp as its my regular. On this occassion I had one pint of Harp and one pint of Guinness. My Dad was driving so could only have one pint of Guinness. 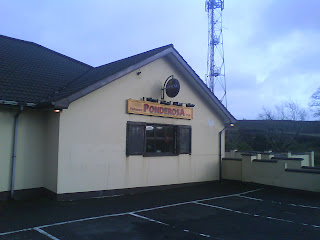 Sitting down in The Ponderosa is very quiet and very eerie on Winter days and nights and one can imagine a time when nobody drives past for a while, almost like in one of them Western filims on a Prairie in the USA, when the bar itself is a rare sign of life in the wild. I’ve been in many many pubs, bars etc. around the world (over 1,100 in total as of Summer 2008), and definitely one of the most treasured and relaxed pints of beer I have ever had has been in The Ponderosa. John even let me pour my own pint…I’m tempted to say that any time I’m driving through the Glenshane Pass, I would find it extremely hard not to stop by for a pint, just for that unique experience. Life’s troubles and worries are gone, as you sip a beer in The Ponderosa, Ireland’s Highest Pub (though check out the debates online of which is actually the highest!). I’d recommend it for a pint! 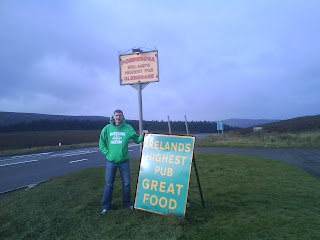 A review and map of The Ponderosa – http://www.nifoodreview.com/the-ponderosa-review.htm

The Ponderosa Ranch – http://en.wikipedia.org/wiki/Ponderosa_Ranch
(what does it all mean and how did the pub get its name??? I’ll not spoil it for you – ask the Landlord when you’re in) 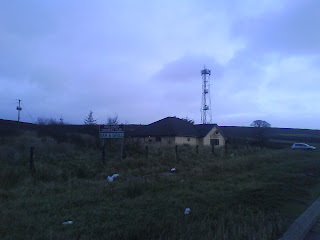 Here’s a nice story from The Ponderosa (copyright of the pub):

WHY THE BARMAN DOESN’T WEAR SOCKS!

Up on Glenshane we’re used to assisting travellers. During the winter we provide food and shelter for stranded motorists. At the height of summer we do a steady trade in water for overheating radiators. A few years back we come to the aid of a distressed traveller in a rather unusual way:
It was a moonless, autumn night. One of our neighbours was riding his brother’s bicycle across the Glenshane Pass to a dance 700ft below us in Maghera. Now it must be said that this old bicycle had seen better days. The handlebars were slack, the brakes worked only some of the time, and the dynamo wasn’t working at all. Consequently he was having difficulty seeing and staying on the road. This was before the modern road across Glenshane was all it’s catseyes and reflective markers was built. 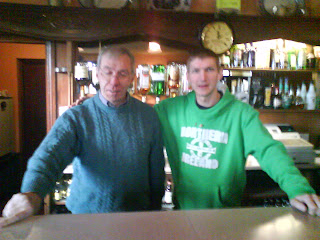 A few hundred yards before the Ponderosa he and the bicycle abruptly parted company, and they both ended up in a drainage ditch. The bicycle survived the immersion, but not so our neighbour. With his big night of dancing apparently in ruins he staggered sodden into the Ponderosa, leaving behind a trail of wet footprints.

For the resourceful staff in the Ponderosa this catastrophe was all in a day’s work, and help was soon at hand. As his own socks hung steaming in front of the big turf fire to dry, we sent him on his way again, wearing the barman’s socks!

The next time you visit the Ponderosa, have a quick look to see if the barman is wearing any socks. If he isn’t, you can probably guess the reason why!

This occasional series is published in Northern Ireland at the famous pub on top of the Glenshane Pass. Look out for further tales, available free at the Ponderosa. (c) 1997 Karlka Ltd – The Ponderosa