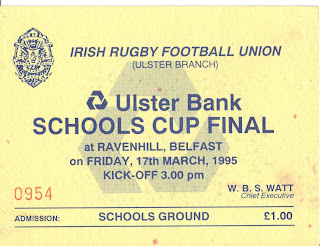 While writing this post, it must be stressed that I do actually HATE rugby and do most things within my power to prevent me from watching it. However, as I enjoy experiencing lots of different things in life, I’m sure this will not be the last rugby post on here, and definitely not the last post on the over-posh, all boys Bangor Grammar School, which I had the misfortune to once attend. However, a special day at Bangor Grammar School does stick in mind…St. Patrick’s Day, 1995, the one and only time that my school got into the Northern Ireland School’s Cup Final during my six years of study there. The rugby School’s Cup is a massive thing in Northern Ireland, maximum age is 18, and most of the stars go on to play rugby for Ulster or Ireland (a stupidly combined team of both Northern Ireland and Republic of Ireland players, with more from down south sadly). The final every year is traditionally held at Ravenhill Park in East Belfast (about 3 streets down from my Granny’s house) and is contested on St. Patrick’s Day. 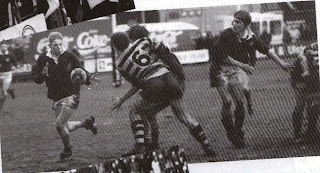 In 1995 we had quite a good rugby team with Chris Shields and Bryn Cunningham two of the stars. I remember at assembly the school would announce when the next round was and the fact that tickets and buses would be organised. It got to early March 1995 and we were pitted up against Regent House Grammar School, a big local rival, also being from County Down, and from my birthplace of Newtownards. Tickets were £1 and an extra £1 for the return bus if I recall. School uniform had to be worn, but yellow and blue flegs were allowed, in support of Bangor Grammar, we wore Blue shirts with white shorts and yellow trim. Plus the colours of the town of Bangor, Northern Ireland were yellow and blue, echoed by Bangor FC the football team. The Semi Final v. Regent was to be at the start of March, but as I loved football and hated rugby I decided not to go, and as a result got a half day of school, I seem to recall it was in the same week as the Republic of Ireland v. Northern Ireland football match, which I followed much more avidly, recording news reports and taking the afternoon off to watch the live game. An Iain Dowie header got us a 1-1 draw in Dublin! And the same week, most of my school mates including Neil McKittrick, Dougie Gordon and Craig Lemon all headed in the official supporters bus to Ravenhill. Even though I wasn’t especially interested in rugby, it was my school I got home and turned on Radio Ulster anyway and listened for the result. We were 9-5 down at one point but came back to win 12-9 in the end, totally against the run of play I heard, but also thanks to some supreme jinxing runs from our speedy centre Ian Martindale. On UTV and BBC sport that night a few highlights showed the action unfold at Ravenhill and it was indeed a late try from Martindale who gave us the victory and sent us into the School’s Cup Final. 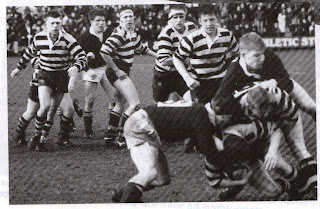 So now we were in the final, I decided I had to go. The reason being mainly that it was the final, and that probably wouldn’t happen again in my time at Bangor Grammar! The day of the final neared and the buzz around the school was actually rather dramatic, some of my classmates even bringing rugby balls instead of footballs for lunch and break times. We were due to meet Royal Belfast Academical Institution (RBAI) in the final, they are commonly referred to as “Inst.” I knew someone who went to school there and it was Michael Sherwood from Comber, whose Mum had been best mates with my Mum growing up in Comber. Michael was a year younger than me and would probably also be attending the final, due to be played at Ravenhill on Friday 17th March 1995. The build up to the final also included BBC Northern Ireland cameras coming to the school to film the Bangor Grammar Rugby First Fifteen. 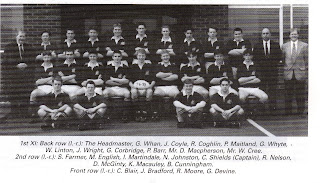 The cost to get to the School’s Cup Final was so cheap – £1 for our ticket and £1 for the return bus (I think), which left from the front of the school. Almost everyone in my class (4Y) was due to go, and we had almost a bus to ourselves, shared with members of 4X and 4S as I recall. Nobody in our form was in the School’s First Fifteen, not surprising as our age group was 14 – 15 and the youngest member of the squad was Gavin Whyte I think, and Gavin was 15 but in the year above. I could be wrong on that. I knew most of the team to see from walking around the school, some of them wore light blue blazers with their school honours on them. I never had any school honours and didn’t ever want any, I hated the school and the fact they wouldn’t play football. Ask Keith Gillespie about that one… 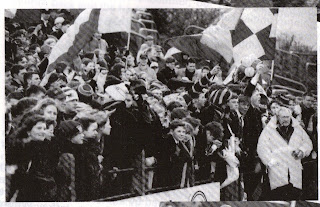 Anyhow rugby final day arrived and I left my house ready for the big day. I had my yellow and blue ticket, my yellow and blue scarf round my neck, a sheet of songs which were drawn up by the sixth form boys and I was ready to support my school in the final. It was a great buzz, and that morning in school we did no work at all, talk was just about the previous rugby finals, and videos were shown to us, including a four year period in the 1980s (1985 – 1988 inclusive) where Bangor Grammar were in four consecutive finals, winning three of them. Today Inst were highly thought of as favourites, we were the lucky underdog who had sneaked past Regent in the semis, but we certainly weren’t there for a laugh, we wanted to win. We had lunch in school before boarding our relevant buses bound for Ravenhill. 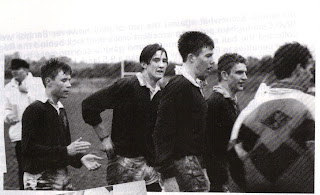 It was a new experience – trips away from the school itself were few and far between – the school was shit at organising things like that, even the odd trip to the Giants Causeway, Mourne Mountains, a Northern Ireland football match (though I went with my dad and my mates anyway) or an Ulster rugby match would have been nice, but we never had that. This was the first time I got talking to loads of my school mates outside of school. The bus up was good banter, I mean it was only a 25 minute drive to Ravenhill, but it was a wet, cold, windy day in Belfast and we were looking forward to getting soaked and singing for the Bangor Grammar Rugby Team! Bangor v. Belfast rivalry is quite strong, which I was aware of from my Boys Brigade football days. Bangor was always seen as the snobby middle class, and Belfast the raw working class. Sometimes real life didn’t reflect that though and the stereotypes are often a myth, fuelled by posh people from Bangor and the bored media. The media hyped this one up though! On the bus I remember sitting with Tompo and McKittrick, both big football fans like me, but for one day only we would be rugby fans… 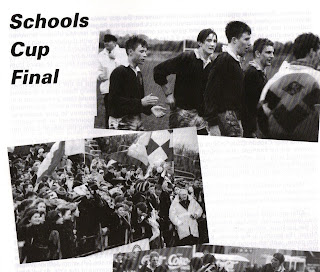 The bus arrived at Ravenhill, we were through the turnstiles and I was positioned very near the front, about two rows back on the near touchline, on the side opposite the main stand. There were a lot of Bangor Grammar fans and school kids there. The weather really didn’t help. We even had some Glenlola and Girls High girls there to cheer us. This would have been my ultimate time to pull as a 14 year old – somehow I missed my chance. Glenlola and The Girls High were the two all girls schools in the town, and we rarely mixed with each other (this single sex mindset and lack of mixing is another of my reasons for hating the way Bangor Grammar is run), but today it was nice that they were there to support Bangor as one. Where was my invite to a Glenlola girls hockey final? (I’m gutted I never got one, what fun that would have been). Anyway the match began and we were in blue shirts and white shorts against Belfast Inst in their yellow and black striped hoops. We had the early advantage of the wind in our direction and we had to make that count, which we did with Chris Shields hitting three conversions and giving us a 9-7 lead at half time. All going well, we could lift the School’s Cup and become Northern Ireland champions. But the big problem was the wind and rain was getting stronger and second half we would struggle to get into the Inst half… 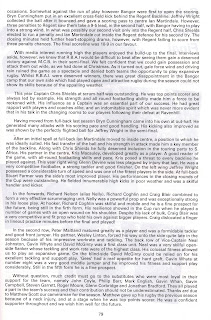 We were quite a noisy wee crowd of teenagers that day, singing ridiculously stupid songs such as “AH – BANGOR! AH – BANGOR!” and in a sort of idiotic tribute comparing School House rugby coach Duncan MacPherson to Eric Cantona, we sang “OOOH AAAH WE’RE THE DUNCAN AH!” I never got on with Duncan MacPherson, a small baldy rugby fan who was my head of house. However this was in the wake of the Eric Cantona fly kicking incident against a Crystal Palace fan at Selhurst Park, and we all found it a hilarious chant at the time. We also had a song about Molly Malone tailored for the Bangor team – “as she wheeled her wheelbarrow through streets blue and yellow” we cried into the Belfast wind, which by now had helped Inst take the lead and take control of the match. We were losing and in rough conditions on a shit pitch, our School’s Cup Final dream was over…Inst ran out 18-9 winners despite our half time lead, but I had thoroughly and surprisingly enjoyed my day out at the rugby. I kept my match ticket as a souvenir (shown), I might have my song sheet somewhere lurking in a box and I don’t recall buying a match programme or if even there was one. That afternoon/evening the highlights were on BBC1 so I taped it, and so a tape of that may exist somewhere. In the meantime enjoy the photos from The Gryphon (Bangor Grammar’s magazine), the one crowd shot (where I’m in somewhere), I think I recognise my mate Scott Callen at the front of the photo. It was a great day out and my only School’s Cup Final while at Bangor Grammar. I left the school two years later, though my kid brother Daniel, now still attends. I wonder will he enjoy a Schools Cup Final with the same school… 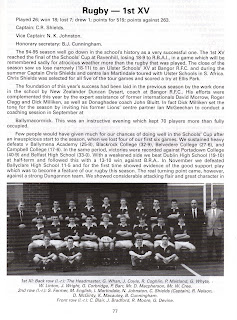 I COULDN’T FIND ANY ARCHIVE FOOTAGE OF THE SCHOOLS CUP OR BANGOR GRAMMAR SCHOOL, so here is an under 14s rugby video made presumably by a pupil: