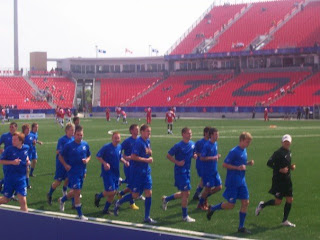 In the first week of my 2007 World Tour, I was in Toronto, Canada. I had booked to stay there for six days, but was totally unaware at the time that Toronto was hosting the Under 20s World Cup! What a pleasant surprise then when I disembarked at Toronto Pearson Airport to see an advert for it. The matches were to be played all over Canada (Edmonton, Calgary etc.) but Toronto, despite not being the capital city, is home to The National Soccer Stadium. Suddenly I realised I would finally make an appearance at a football World Cup! (Although to be honest I had already watched Northern Ireland play Turkey in Coleraine in The Milk Cup, which in its own way IS a World Cup tournament) 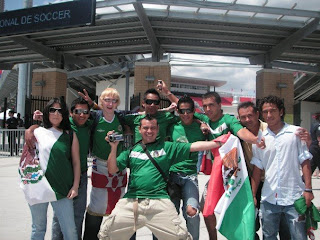 Under 20s is a strange age bracket to have. In the UK we are used to under 18, under 19 and under 21 matches, but no under 20s. Therefore this probably influenced the fact that only one British side qualified: Scotland. England, Northern Ireland and Wales would not be there, however I knew I would turn up with pride and wear my Northern Ireland shirt anyway. I went to suss out tickets for the matches, and found it be be a very reasonable 23 dollars for a double match ticket. The two matches I had tickets for were group matches Mexico v. Portugal (both tipped to be semi finalists) and New Zealand and Gambia (almost representing their continents as it appeared no other teams could make up the tournament from Oceania, though Zaire I think were also there from Africa). The day I got my tickets there was actually two other matches on and astonishingly these had both sold out. It was certainly busy. I mingled with the Mexico crowd that day and they said I was their “guest of honour” as I was dressed in green. I posed with a Mexico fleg and fans for photos as well as meeting some hot Brazilian ladies to whom I sang “We’re not Brazil; We’re Northern Ireland” They thought I was a lunatic… 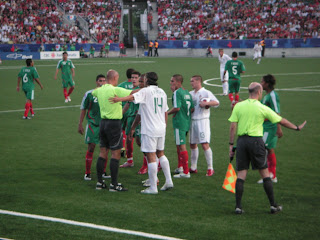 At the hostel I stayed in (the wonderful PLanet Traveler in Kensington Market area) there weren’t any football fans, or even anyone who wanted to accompany me to the football, so I would go alone with my fleg and talk to loads of people there. I would have got tickets for a Scotland match, but unfortunately they were all played miles away, I think in Victoria and Burnaby. Having ancestry from Scotland, Scott as my middle name and being British would lean me to support any British side playing. Scotland, predictably went out in the first round, though in a group which in reality wasn’t that tough. Nigeria, Japan and Costa Rica all beat Scotland to send them home bottom of the group. The heat of Canada probably affected the Scots and they were out. The group I would watch was much more interesting with New Zealand even giving a good account of themselves. It all came down to the matches I would attend. Portugal were fancied to finish second in the group behind Mexico, but The Gambians bate them! This was the final group table, which shows Portugal in third, though they sneaked a second round place on goal difference. Mexico would go on to lose only to winners Argentina in the end…
Group C
Team MP W D L GF GA Pts
Mexico 3 3 0 0 7 2 9
Gambia 3 2 0 1 3 4 6
Portugal 3 1 0 2 4 4 3
New Zealand 3 0 0 3 1 5 0 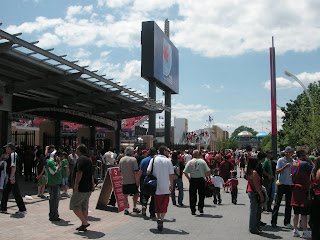 The National Soccer Stadium overlooks Lake Ontario and as a traveller there was no need for me to get buses, trams or taxis to get there. I much enjoyed the walk, which took maybe 45 minutes from the hostel, along Spadina Avenue, the beautiful sea front of Toronto and random streets and apartments which lead up to a friendly atmosphere building outside the stadium. On the way I bumped into many characters, not many drinking alcohol mind you and I was really getting in the mood for it. I would witness live football in six of the nineteen countries I would visit on this world tour, this was the first one! By match day I walked alone to the stadium, soaking in an atmosphere which was basically a mini World Cup! 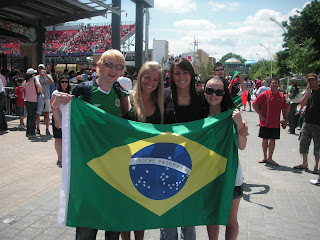 The first match I saw was to be New Zealand v. Gambia, I decided to get in about 1 hour before kick off to meet people, have a chat, get some pre-match photos, get my seat and buy some souvenirs. My double match ticket meant I could stay in the same seat for both matches, one was at 5 pm and one at 8 pm I think. On the way in I got frisked by two hot Canadian chicks. I had my bag with flegs with me so I could get the SOE NISC fleg out! I got a tournament programme and also filled in a questionnaire so I could get a free badge. I then noticed it was licensed and you could have a beer while you watched! Amazing, you cannot do this in my UK homeland, so I had to have a few beers. I then went in and took my seat, which to my entire shock was FRONT ROW. Having just come out of a PR job and been keen on blagging, without trying I had blagged my way (albeit at the age of 27) to front row seats at the World Cup Finals. Well the Under 20s, but sure age is just a number. I sat down and soaked in the atmosphere, getting some photos with my fleg out. I then met three Canadians wearing different Italian teams shirts (Roma, AC Milan, Inter Milan), they were lovely and it was Paul, Christina and Tanja. The two ladies were very hot! I enjoyed chatting to them and the way they said “Wow? Northern Ireland” in that cute Canadian accent was class. I found it exciting that they like football as well – most US and Canadians call it ‘soccer’ and would rather watch Baseball, American Football, Basketball or Ice Hockey. We enjoyed chats and it turned out that Tanja supported either Croatia or Serbia (I cannot remember which one!) as she had heritage from there. Paul and Christina had heritage from Italy, hence the shirts. I then met a guy in an Ireland shirt, but he was about as Irish as an African Elephant. I did laugh at it though, and informed him that my team, country and shirt (Obviously Northern Ireland) were much better. Danny Griffin can prove that one for me for anyone who asks! 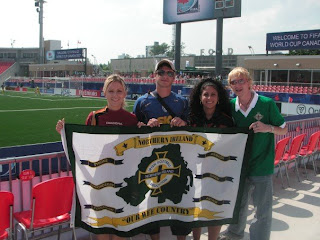 Then the first match began and I was joined by some Portugal and Mexico fans (there was no segregation) but there were still many empty seats, with the first match not being as popular, and even some people with a double match ticket only turned up for the Mexico – Portugal match. The first match started and it was obvious that Gambia were much stronger and faster. Perhaps the heat affected New Zealand, who looked too hot and too tired. New Zealand played in blue, which surprised me as I expected All Blacks colours! Gambia were in white and began to take control. They had a lot of chances but New Zealand did well to hold them to 0-0 for a time. Gambia finally breached it and that 1 goal settled the match and looked to confirm Gambia’s place in the second stage. The New Zealanders were out, but I applauded them off with the Union Fleg part of my Northern Ireland fleg. After all they had done more than Northern Ireland or England by being there. The stadium got much busier throughout the match and I enjoyed speaking to Pedro who was also at the match on his own and was beside me, who was a Portuguese fan (now living in Alicante) and he spoke great English. I’ve kept in touch with him and the Italian shirt wearing Canadians. 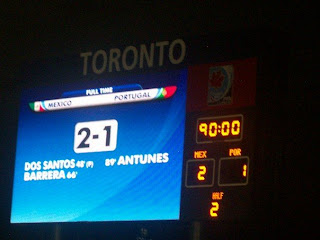 I had a beer and got some more photos while we waited on the big match! A blue crimson Toronto sky both rained and shone on us as night fell on the Mexico and Portugal players. By the time the national anthems came on the stadium was full. It was a sell out. Mexico had one of their stars, Dos Santos just signed for Barcelona and Portugal had a guy called Pele – not the same one…the action was thick and fast, really energetic, a real game of football. Portugal had a good chance in the first half with a free kick which just went over the bar. At half time it was 0-0, but the best was yet to come. 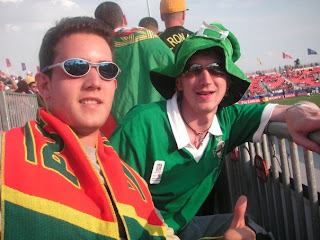 Mexico started the second half with pace and attacks down both flanks. Eventually this led to a penalty, which they scored and the place went wild!! There were Mexicans with sombreros jumping up and down with beers, and my mate Pedro just sat there hoping Portugal could come back. From there though, Mexico took charge (and looked impressive) and a second goal came. Dos Santos was the star of the show and Portugal did manage a late consolation through Antunes (a cracking free kick). The sky was dark and I said my goodbyes to Pedro and the others and headed into the night. A great experience. I’ve been to the World Cup! My dream now is to go to the proper World Cup someday to support Northern Ireland. We’ll make it again some day, and if we don’t I’ll keep replaying Whiteside’s free kick against Algeria. What a genius… 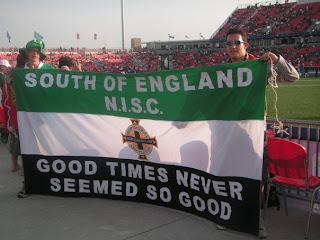 The classic meeting between Portugal and Mexico on the second Group C matchday in Toronto on Thursday was always going to be a tight affair. With two of the most naturally gifted teams at these finals squaring off, tension and technique was the order of the day. 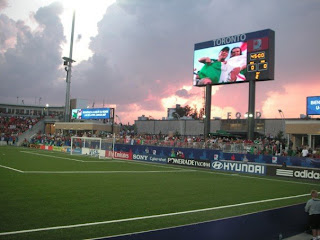 Barcelona gem Giovanni Dos Santos, who shone with some tremendous individual moments in the first half, had his say in the second, stamping his mark on the proceedings to send the defending U-17 world champions on their way. Ghosting into the penalty area to latch on to the end of a slide-rule Carlos Vela through ball in the 48th minute, the soon-to-be-senior Mexican international was hauled down unceremoniously by Paulo Renato. With a technique grabbed straight from watching Brazil star and club team-mate Ronaldinho in training, magic-man Gio tip-toed up to the spot and stroked home with his left foot. As Portuguese heads dropped both down on the pitch and up in the stands, El Tri substitute Carlos Barrera slammed home a peerless half-volley from near the spot in minute 66 to take control of the contest.

A blistering free kick goal from Antunes in the last minute of regular time did nothing to change the outcome and little to dent Mexican confidence looking ahead. The result guarantees the stylish, organised and entertaining Mexico a place in the Round of Sixteen alongside yesterday’s qualifiers Japan and Nigeria. They play New Zealand in their last game on Saturday while Portugal square off with Gambia, with whom they are even on three points, on the same day.

Here’s a wee video I took: