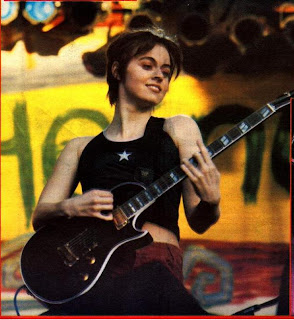 I love delving back into my mid 1990s record collection and did so recently with my Sleeper albums. Sleeper were a girl fronted rock/Britpop band who had three albums between 1994 and 1997. I got into them in early 1996, mainly due to my admiration and infatuation for lead singer Louise Wener. A gorgeous girl who has that certain vibe, beauty, intelligence and cheekiness all in one. I used to watch them on Top of The Pops (RIP) and Louise Wener was also interviewed regularly on TFI Friday (one of those must watch shows on a Friday evening on Channel 4 in 1995 – 1998 I think). Not only did I fancy the pants of lead singer Louise, but the songs were pretty awesome in both lyrics and music. Sleeper are probably my favourite female fronted band of all time. The first song I heard was “What do I do now?”, the first single from the ‘The It Girl’ album. It was an album consisting of teenage lust, shagging on sofas, driving through London, taking the piss out of politicians and freedom. At least as I saw it. It was the next single from Sleeper that got me hooked, the melodic “Sale of The Century”, where Louise feels “just like she just got started”, she then pretends to be scared before deciding that “we don’t care.” It could be a song about a night on the tiles (kitchen or nightclub) as the subject of the song becomes the “Sale of the century.” A friendly guitar hook allows a sexy Wener voice to ease through the lyrics, easily making 16 year olds (at the time) lust over her obvious sex appeal and willingness to make a name for herself in the British music industry.
Sale of the Century (Live on Thank Fuck It’s Friday, 1996): 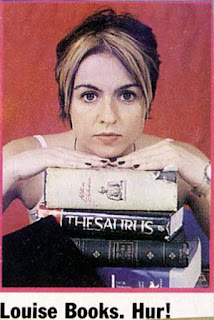 For the rest of 1996, I picked up the odd single and album and videod some of the Top of The Pops and TV appearances, as well as banging up my radio when she came on. IF you listen to the songs now, they still sound great. It is mainly the singles that are good, and there cannot be more than 70 Sleeper tracks in their entire archive (B-sides accounted for). 1996’s final two singles were “Nice Guy Eddie” (about a night on the settee having sex, it would appear) and “Statuesque” (elegant ballad delving into champagne orgies and a trip behind someone’s steering wheel). The lyrics are all intelligent, it was Louise that wrote them. A year passed by from “The It Girl” album and I was tuned into Steve Lamacq’s Radio One Monday show where special guest Louise Wener gave a one hour interview and talked us through the third (and what would prove to be the final) Sleeper album. Through her sexy voice, Louise talked about songs such as “Nothing Is Changing” (I’m not sure what to do; everything stays the same), “Traffic Accident” (Don;t fucking cal me unless you’re in one, OK?) and Please Please Please (you know you want to). It was this album for me, the oddly titled “Pleased To Meet You” that encapsulates what Sleeper were about. Angry ballads, peaceful love songs, stupid choruses (check Romeo Me out), inspired lyrics and high emotion all come together in Louise Wener’s finest hour. I only have a copy of this album on cassette tape, which I play regularly in my car. All the songs on it are great. I particularly like the song “Nothing is changing.” Louise also hates journalists and media in equal moderation and hints at this throughout the album in her own cynical-ness. With the era of Britpop ending forever on 21st August 1997 when Oasis unleashed ‘Be Here Now’, this final Sleeper gem is condemned to the history books. One that didn’t really sell, one which wasn’t really appreciated and “just another fucking Britpop band.” Not true. Sleeper were special.

Louise Wener was arguably, along with Elastica’s Justine Frischmann, Britpop’s biggest female star. She was even something of a sex symbol, placing highly in Melody Maker’s and NME’s “Sexiest Woman” polls several years running.
Wener enjoyed significant media coverage, including an NME front cover and a slot as guest presenter of Top Of The Pops. Arguably one of Britpop’s stronger lyricists and melody writers, her song “What Do I Do Now?” was covered in a low key version by Elvis Costello in 1997.
After the band split in 1998 following the demise of Britpop, Wener went on to have a career as a novelist. She will release her fourth book for Hodder & Stoughton in 2008. Wener also features prominently as an interviewee in John Dower’s definitive feature film documentary on Britpop, Live Forever (2003).
A Greatest Hits compilation, with tracklisting and artwork by the band themselves, was released on Sony/BMG in 2007. 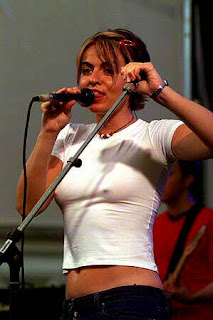 My favourite Sleeper songs: Statuesque, Sale of the Century, Traffic Accident, Nothing Is Changing.