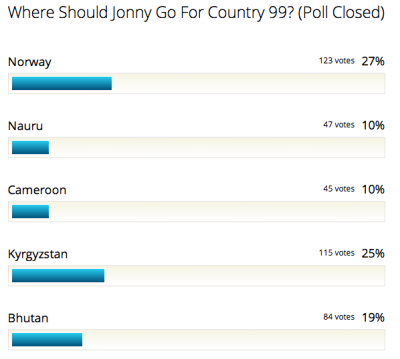 The results of my reader poll – where will I go for country 99?

First of all thanks to everyone who voted in the poll I created a few months back, if you missed it I also wrote a post on YOU all being responsible for deciding my destiny. I’m really grateful that you took the time to vote and between you all have chosen my destiny, over a 3 month period which ended at 11.59 pm on 31st December 2014. I totally expected everyone to vote for Nauru or Cameroon, but in the end the winner was Norway!! So my 99th country on my journey, as chosen by you will be Norway!! Not just yet though – as I’m currently on 95 so I’ll have to visit 3 more in between – will work out the logistics over the next few days and hit up country 96 before the week is out and get my 99th one in the early part of the year. 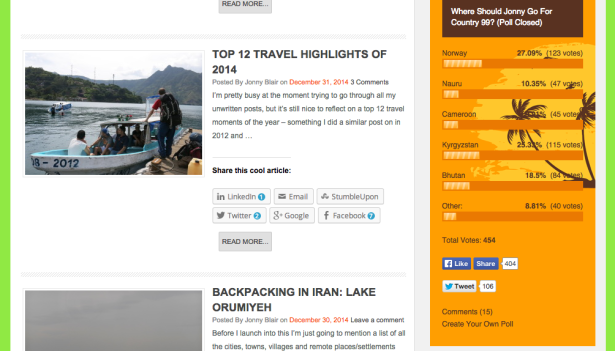 Results of the poll for country 99.

I didn’t advertise the poll as much as I could have done and I know that – times have been busy, but I was still delighted that 454 votes were received. Here are the results of the poll: 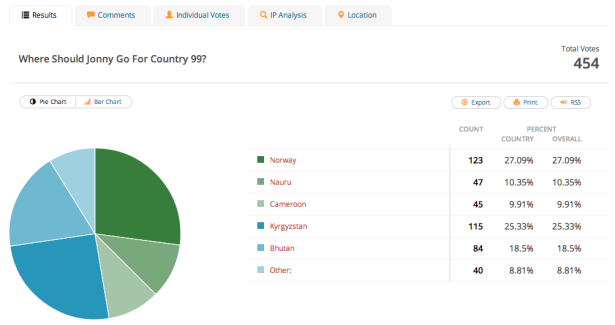 The results of my Reader Poll in Pie Chart.

So the winner with 123 votes in the end was Norway, with Kyrgystan coming in a close second (8 votes behind on 115). I also mentioned that anyone who left a comment on the vote would get a video mention when I make my 99th country, so I’ll get that uploaded in due course, whether you were a Norway voter or not. 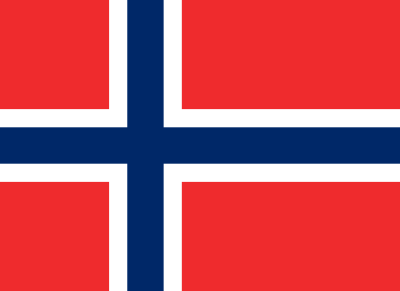 Thanks for the votes – I’ll be heading to Norway for country 99!!

The personal excitement of this poll was pretty big too. I was really excited by it – especially when in the last week, I had no idea what country would win at one point Kyrgystan was ahead. Being honest I kind of hoped it would be Kyrgystan as I had a plan to fly to Ukraine, overland through Russia and the Stans, but alas – Norway wins – one of the more expensive options, however I have a good friend from Norway – Lief so I get to meet up with him in the third different country (having been in Uruguay and Brazil with him before!). 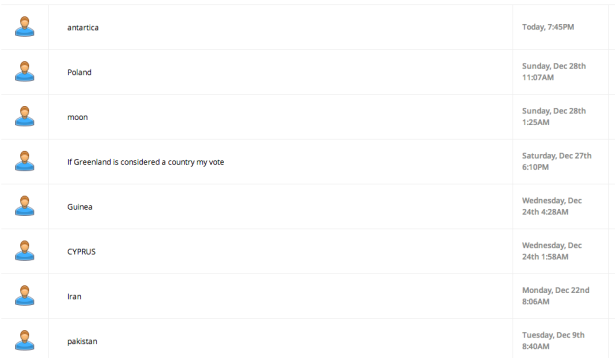 Some of the other votes are places I’ve been to, or highly amusing answers.

It was also highly amusing to see some of the answers in the “Other” category – I mean 2 people each voted for Iran, Antarctica, North Korea and Costa Rica!! If you’ve followed my stories, you’ll know I’ve been to all 4 of those already. Also whoever voted for Northern Ireland – again had to laugh but happy you called the country by the correct name. Northern Ireland was the FIRST country I was ever in.

These are countries that people voted for in the “Other Category” that I have already been to (they weren’t to know that of course, unless they had read my stories!): 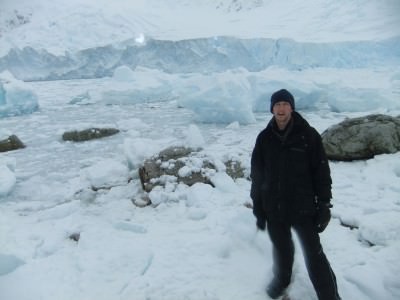 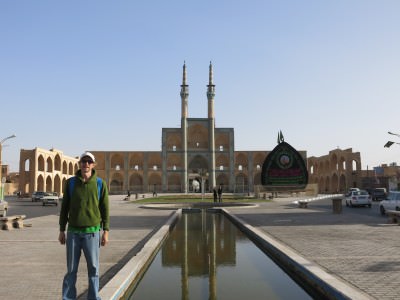 These are countries that people voted for in the “Other Category” that I really do not think are actual countries (or could ever be classed as such):

Thanks for the comedy touch with “Stoke on Trent”, yes I did chuckle at that one! And oddly I have never been to Stoke on Trent, so I will actually bear that in mind.

Also for those that have followed my journeys on here for what is now the 8th year of Don’t Stop Living, I am currently working on my long awaited book and after countries 99 and 100, the book will be a priority.

Happy New Year to you all and Safe Travels!!

Any questions, comments, tips or queries you have, just send me an e-mail. I reply personally to every e-mail I get. Look forward to hearing from you.
jonny at dontstopliving dot net

In the meantime, enjoy my website, enjoy life and don’t stop living!!