Yes I really went to all these bars and backpacked through Macedonia staying in Skopje and Ohrid, but the photos and videos were all lost so no photos sadly, except the one below which I uploaded as my draft cover photo for this post back in December 2014. 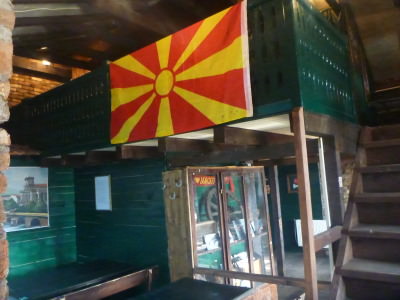 One of my favourite cities in the last year has been Skopje, the capital city of Macedonia and for some reason I haven’t written enough about it just yet. You may have read that I crossed the border into Macedonia from Sofia in Bulgaria and that I also visited Lake Ohrid before getting a bus north into Kosovo. However, let’s shed some light on Skopje. Skopje is Europe’s true gem. A wild, pumping city with more statues you can count, more surprises than you expect and some of the coolest bars and restaurants in all of Europe. Skopje kicked ass and I’m giving it a massive exposure here on Thirsty Thursdays with 12 bars, cafes and restaurants I visited in my stay at the City Hostel in this vibrant and cool capital city.

1.Telekom Trend
Telekom Trend was the first bar I had a beer in in Macedonia and it was just gone darkness over the river front when I knocked back a cool beer in the outside beer garden by the Vardar River. It had live British football on TV as well.

2.Drama Coffee House
Coffee Houses are all the rage in Skopje and even better they are not spoiled by commercialism. No shocking *bucks to be seen and some kicking cafes serving up as much coffee as they do beer. Like this one, most also have wifi – backpacker bonus.

3.Amigos Cantina
Since my 2014 trip to Mexico for the first time, I’ve been addicted to Mexican food and drink. I just love the intense flavours in it and the happy go lucky attitude of Mexican people. Amigos Cantina is on the main Macedonia Boulevard through the new city.

4.Laci Tea Shop
The Old town on the other side of the river Vardar is brimming with Middle Eastern Tea shops. So which one do you pick? I walked around the market a few times reminiscing on my time backpacking Iran, Turkey and Iraq before finding the welcoming owner at Laci Tea Shop. A decent place for a 50cent cup of tea and a chat about politics.

5.Old Town Brewery
You want to try some real beer then it has to be the Old Town Brewery. After touring the Tvrdina Kale Fortress, this place made a perfect lunchtime pint for me, you can sit in the beer garden in summer or just sit by the window like me overlooking the streets.

6.Tomee Sofka
I made the 『Glentoran FC Pilgrimage』 to the national football stadium in Skopje and after finding it and getting on the pitch, I decided on a post footy beer and pizza. I popped into Tomee Sofka which is near the stadium, attached to a hotel and actually a bit posh. I was certainly the only backpacker in there and I’ll be honest – the service was crap, they got my pizza wrong and the beer was overpriced. Still, the joys of travel.

7.4U Cafe
On a dark night in Skopje, I happened upon the 4U cafe, crawling up with a map and an address for my hostel asking the staff if they can help me. These guys were awesome – they spoke excellent English, found my hostel and so the next day I decided to pop in for a creamy cappuccino which went down a treat.

8.Casa Cubana
This Cuban themed restaurant is down by the harbour and attracts a lively crowd. The food is overpriced and the drinsk range is very poor for local Macedonian beer, however it’s worth a punt for its location and the fact you can sign the wall, as most others have done.

9.Bistro London
A bit of a swanky British themed pub this, with decent ales. It’s right by Plostad Macedonia and worth a drink – it’s not the cheapest either but I enjoyed my swift beer in here.

11.Barcelona
On my way back to the hostel on my last night, I crawled into the last two pubs open on route, the first was the trendy Barcelona. The best thing about this bar was the staff – Filip and Monika. Both local Macedonians who sopke great English, enjoyed a chat, suggested the best Macedonian wine for me to try on my budget and posed for photos. Thanks guys – real pleasure to meet you both!

12.Play Cafe
Again Play Cafe was awesome – a small poky wee bar on my walk home to the hostel and I spoke to the staff in here who were cool. Football was on and the bar man spoke of his desire to head to China to teach English.

So that was just a quick fire 12 I somehow managed to visit on my 3 days in the Macedonian capital city Skopje. It’s a city brimming with up and coming bars, cafes and restaurants and please – enjoy it. It’s a cracking city, I loved it!

Here are some videos from my coffee, tea, beer, wine and food experiences in Skopje in Macedonia:

2 thoughts on “Thirsty Thursdays: 12 Bars, Cafes or Restaurants I Visited in Skopje, Macedonia”