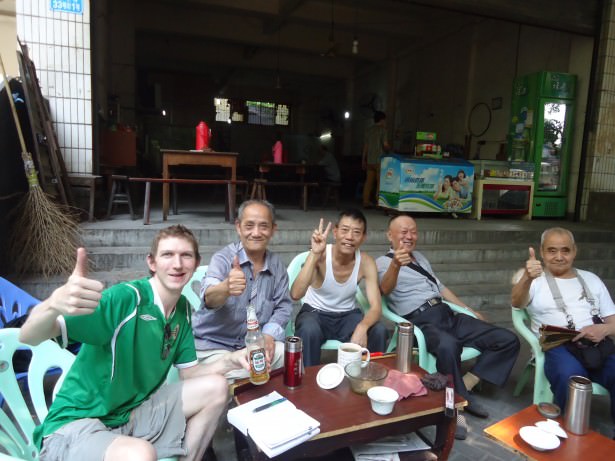 You’ll hear a lot more about Chongqing. Often dubbed (rightly or wrongly is anyone’s guess) the biggest city in the world, this colossal place was somewhere I had longed to visit and was anticipating it for a long time. Chongqing is a fantastic city and it lived up to all expectations. Completely! After getting the Cable Car across the Yangtze it was time for a cold beer with some locals.

Once I got off the Cable Car on the other side, it was a hot day and it was time for a beer. An ice cold Chinese cheap beer. So I saw a few older local Chinese guys hanging around outside a “cafe” and I walked over.

I asked for a beer, initially when I looked in the fridge they didn’t have any. Then the girl heads out the back to a fridge and brings me a cold one. Chongqing local beer in a 500 ml bottle at a cost of 5 RMB. That’s about 50 pence. The guys were so bemused – they had probably barely seen a foreigner before.

So I sat down and joined them. In the heat and in the relaxation of it, I was caught up in the moment and just hung out with them for a few hours whiling away the time.

These guys didn’t speak any English, nor do I speak any Putonghua/Mandarin (I know a bit of Cantonese/Guangdonghua from my time in Hong Kong). Yet for a few hours we chatted away somehow enjoying the madness of it all. You make new friends on the road, and you experience new things and this was me, backpacking alone through Chongqing meeting a few over 70 year old locals and just drinking with them by the roadside on an afternoon.

Initially one of my mates (Neil Armstrong) was meant to come to Chongqing with me on this trip, but he wasn’t there, yet I knew he’d have loved the randomness of this all.

We sat and talked about Chongqing, Hong Kong, football, women and life in general. One of the guys was 74 and had never left Chongqing in his lifetime. Yet he was a total inspiration. He was happy with life. He spoke about his wife, kids and I could tell he had worked his ass off and was now enjoying the relaxation of it all.

When you travel so much, moments just don’t last forever and this one had to come to an end. There was even a tad emotion when I left and waved goodbye. These Chongqing lads were loving it. Most of them won’t know how to use the internet which is a shame and they’re now on here as part of my story. I guess the only way to ever keep touch would be for me to head back to Chongqing again, visit the same bar showing the photos I took of these dudes and get re-united. But let’s be honest, that probably won’t happen.

This was another travel memory for me and an unusual thirsty Thursdays moment. I’m happy to sit with a beer and watch the world go by…

** STOP PRESS ** as you can tell life on the road isn’t always easy to update things and this week has been hard to get online, backpacking in Myanmar is ace but internet is shocking, photos and videos will be added at some point and I’ll re-post this one!

** Update here are the videos from drinking with the 70+ year old lads in Chongqing China: