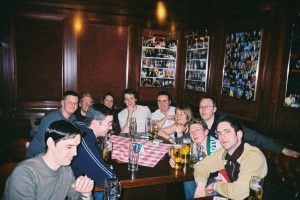 You know what, I LOVE Berlin. Yes, but due to my crazy travel adventures, I ain’t been back since 2007. It’s a great city with so much going for it. History, culture, food and DRINK. Boy have I had some crazy nights out in Berlin!! In fact I reckon it’s the European City I have drank the most alcohol in on my travels, outside of the UK…so it was going to feature on Thirsty Thursdays at some point. 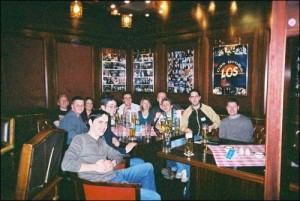 Thirsty Thursdays in Berlin at the Sailors Bar with the lads.

The very first night I had out in Berlin was just before my 25th birthday. I was with a bunch of lads and a few of their girlfriends and we were on a football trip to head to Poland next! After a quick beer in the hotel we stayed in – the Hotel Aldea (there’s a Berlin hotels link below) we headed out to see the city. It was Easter Sunday 2005. And yes, back in 2005 I used hotels a lot more – I wasn’t actually much of a budget backpacker when I started out to be honest. I still cut corners, but me and my mates usually booked hotels from 2001 – 2005. 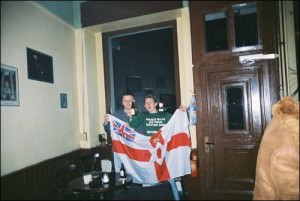 With my old travel buddy Dean flying our Northern Ireland flag in a 24 hour bar in Berlin.

We got as far as Potsdamer Platz and it was beer and burgers time. We were all lads in our twenties apart from Dean from Londonderry who was still only 17 at the time – a crazy story about Dean is to follow very soon! After that it was more beers then we headed to meet some other Northern Ireland fans and pose for photos at Brandenburg Gate and the British Embassy. Token visit to the hotel where Michael Jackson dangled the baby and we were back in the pub – a Sailor’s Bar. After that another bar with the lads where we hogged the dukebox and put Van Morrison on. Last thing I remember was being downstairs in some dance club with other Northern Ireland fans I’d only just met. Got two hours sleep then up sightseeing again, we did the amazing Jewish Museum then we saw this sign… 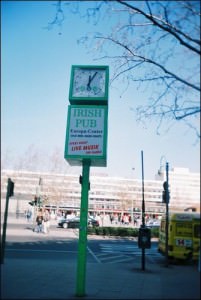 While sightseeing round Berlin, myself and the lads saw this sign. In we go…

A sign for an Irish pub so a quick Bratwurst and a pint and we had started drinking again, a bit more sightseeing round the Berlin Wall (or what’s left of it) and Checkpoint Charlie before I bought some beers to drink at the hotel before our second night out. It was a full on two days of drinking. Back then I don’t know how I managed it! 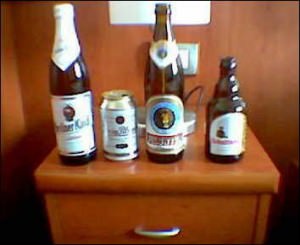 Some of the German beers I tried on my first trip to Berlin. It was pure madness.

After those beers, we were back out in the pub again. No surprises there – it was another manic night which culminated in Dean and myself being the last two lads out and finding a 24 hour bar that basically closed when we wanted it to. We had a train to Poland that morning. I don’t know how on earth we made it. In those days, 24 hour bars were unheard of in the UK so this was a real novelty for us. 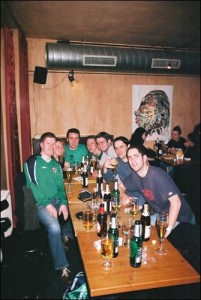 Thirsty Thursdays with the lads in Berlin back in 2005.

We spent a fair bit of time in the pub in the photo above but for the life in me, neither myself or anyone in the photo will remember its name. They had a computer there with internet though as I recall checking the Bournemouth score and we lost 1-0 to Milton Keynes that day. After that bar we headed to the Oscar Wilde for singing. 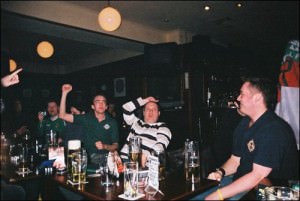 The Oscar Wilde Irish Pub in Berlin – we got smashed in there!

The Oscar Wilde pub in Berlin was taken over by about 20 of us that night before Dean and I found the 24 hour bar. Then we got up and rushed it on the U-Bahn to Berlin east station and headed to Warsaw, the final fling with Germany on this trip was Dean barfing everywhere, buying and ice cream and me having a CD player blasting while drinking a carryout. 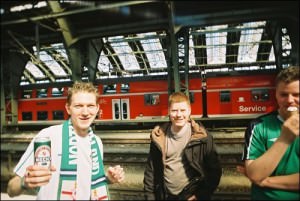 I have video footage somewhere of this trip, but for today just a short overview of a great trip and to make sure Berlin is featured again on my blog as I loved it! So head to Berlin and sightsee by day and party by night.

I’ll definitely cover more on Berlin at some point as it’s a fantastic city, here’s a few links to help you on your way…

– Hotels to help you explore the city of Berlin

Videos and more reports on Berlin to follow at some point.

3 thoughts on “Thirsty Thursdays: Getting Battered in Berlin, Germany!!”