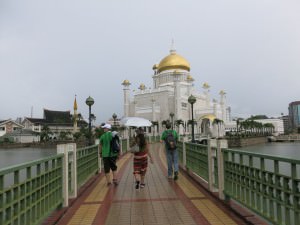 The Muslim state of Brunei Darussalam is, unsurprisingly full of Mosques. You might have read how I visited the Jame Asr Hassanail Mosque in the suburbs of Bandar Seri Begawan. It is a spectacular mosque. However, while staying in the city centre of Bandar Seri Begawan, the other main mosque in the city just had to be visited. We decided to view this mosque by day and by night to get the best views and experiences of it and I recommend doing the same if you’re staying in Brunei. The mosque in the city is called the Omar Ali Saifuddien Mosque and it sits elegantly in front of a pond, a bridge and inside an eleaborate complex on one of the main roads in Bandar Seri Begawan. 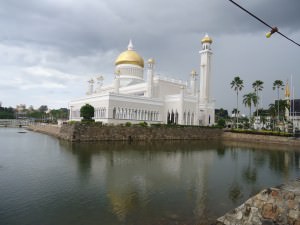 Marvelling in the grandeur of this Mosque in Brunei. Backpacking dream.

You can’t really miss the Mosque by the way – it’s on the street Jalan McArthur and to be honest Bandar Seri Begawan is one of the smallest world capital cities I have ever stayed in (even smaller than Belfast and Paramaribo), so you will find it easy enough. 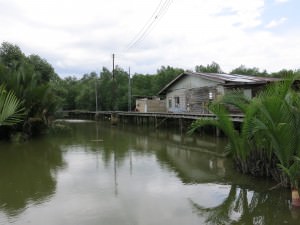 You’ll pass the village on stilts on your walk round to the Omar Ali Saifuddien Mosque in Bandar Seri Begawan, Brunei.

Head there during the day and you can enjoy the walk around the mosque and a trip on some of the houses on stilts on route. These houses on stilts are separated by water from the main Kampong Ayer which I wrote about. In fact these houses on stilts are very worn, old and to be honest they are really dirty. Not appealing to those clean freaks, but I didn’t have any issues with the area. Neither did my travel buddies Panny Yu (my girlfriend), Neil Armstrong (another wandering Ulsterman) and girlfriend Melanie Domingsil (from the Philippines!). 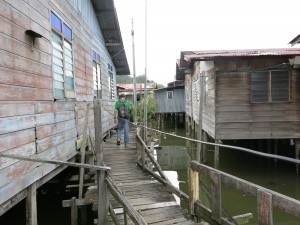 Backpacking in Brunei’s capital – a real off the beaten track gem if truth be told.

We crossed from the “Venice of Asia” part of the capital onto a bridge to see the magnificent Omar Ali Saifuddien Mosque sparkling in the mid-day rain. 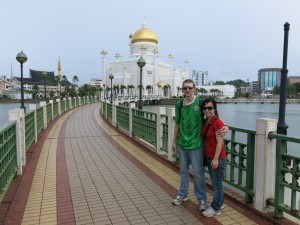 I’m not really into my Muslim history to be honest but I love visiting Mosques and as all travellers will know, visiting religious buildings is PART of the travel lifestyle. You don’t go to Brunei and not visit a Mosque. However I dug out some information on the Mosque itself… 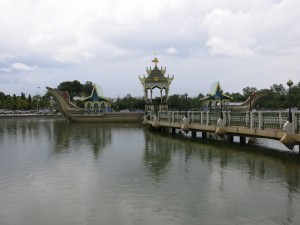 The Mosque itself sits in some fine quarters. The view from the front overlooks a pond and a concrete boat, linked by a platform.

It was named after Omar Ali Saifuddien who was the 28th Sultan of Brunei. This particular Mosque was finished in 1958 and towers at a height of 52 metres, so you can kind of see it from most parts of the capital city. 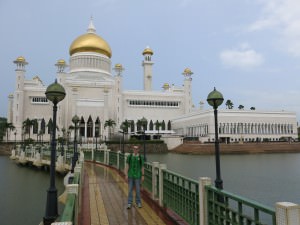 Enjoying the view from the boat and bridge of the Omar Ali Saifuddien Mosque in Bandar Seri Begawan, Brunei.

After walking around you can take your shoes off and go inside, or visit the concrete boat in the lake. 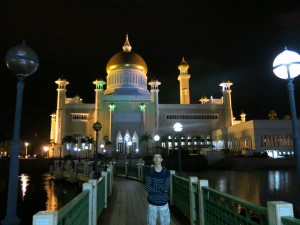 The same night we visited again to get our night photos and views of it. By night there are regular Muslim prayer meetings and one of my videos below capture the noise from one of these. 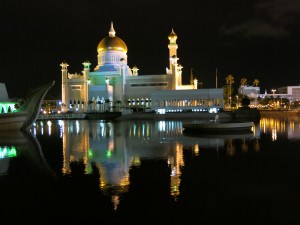 The reflection of the Omar Ali Saifuddien Mosque in Bandar Seri Begawan by night.

On a final note, I must admit I was totally surprised by Brunei – it is a really great country to travel to and I thoroughly recommend. All my travel buddies agreed as we drank some beer that we had brought in ourselves across the border!