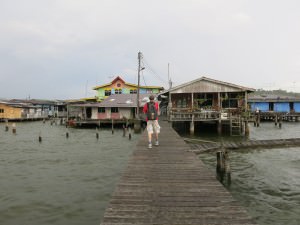 Backpacking through Kampong Ayer in Bandar Seri Begawan, Brunei. Another “Venice of Asia”!

Right so you’ve heard the term “Venice of Asia” a load of times, in fact you might even have read about it twice on my blog as I visited Tai O (Hong Kong’s answer to Venice) and Pingjianglu in Suzhou, China. But there are so many places dubbed the Venice of Asia it gets a bit ridiculous, today I’m talking about Kampong Ayer. Where? Exactly! I hadn’t heard of it either but while staying in Bandar Seri Begawan, Brunei’s capital city, I had to make the short boat trip across to Brunei’s answer to Venice – known as Kampong Ayer and WELL worth the trip. 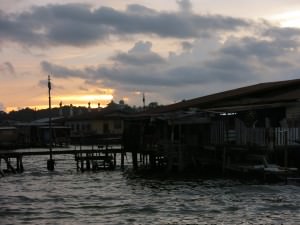 The sunsets over Kampong Ayer in Brunei another place which has been given the “Venice of the East” moniker.

How to get to Kampong Ayer, Bandar Seri Begawan

Head to the waterfront of Bandar Seri Begawan at any time during the day and guys on boats will shout up at you asking if you want a boat. Tell them you’re heading across the water, directly to Kampong Ayer. They all speak English and rely on tourists so you’ll have no problems. Failing all else just point to where you want to go. 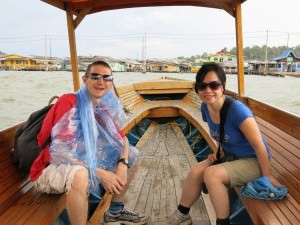 Getting our boat across to Kampong Ayer, Brunei’s quirky answer to Venice.

How much does it cost to get to Kampong Ayer?

Each single journey costs $1 Brunei Dollar one way per person so that’s all you need to pay to get to Kampong Ayer. You’ll have to do the same on the way back. Never pay any more than $1 Dollar for it. It’s a standard rate. No tickets – just pay the guy on the boat. 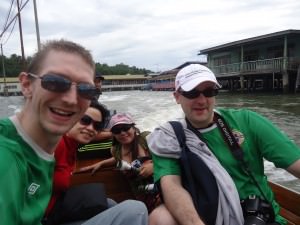 On one of the boats in and around Kampong Ayer.

What is there to do at Kampong Ayer?

For a start it’s totally free and basically you just walk around admiring the place. Here are a few things to see and do when you’re over there. It’s not touristy at all and there is no “set path” – just walk wherever you want.

1. Houses – All the houses in Kampong Ayer are built on stilts on the water, so they are worth admiring, checking out, getting up close to and popping inside. Great for photographers, loads of colour, loads of angles and not many people about to disturb you. I went inside one of the houses – some are open – but people live here so respect that too. 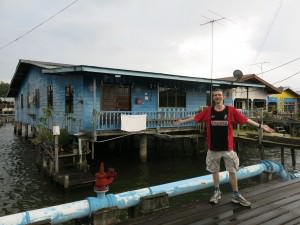 Admiring the colourful stilt houses on the water at Kampong Ayer.

2. Mosques – Brunei is a staunch Muslim State and Mosques are everywhere – even built on the stilt villages at Kampong Ayer. We found two Mosques but there may be more. 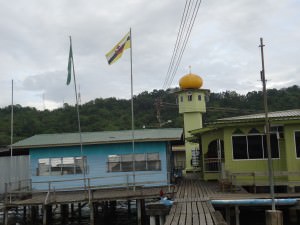 Brunei Flag flies proudly near a Mosque in Kampong Ayer, Bandar Seri Begawan, the “Venice of the East”.

3. Meet the Locals – People in Brunei are mostly friendly, welcoming and approachable. We met the locals and these lively folk even posed with my travelling Northern Ireland flag. A great place to get off the beaten track on your travels. 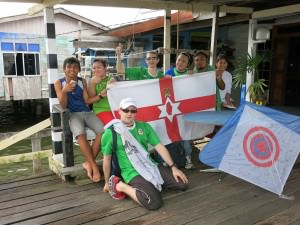 Meeting the locals in Kampong Ayer – these guys live in the stilt village their whole lives! Not sure what they made of us tourists but a great photo.

4. Buy Sweets – This might seem like an odd one, but there aren’t many shops in Kampong Ayer, one which stood out was a traditional Sweet Shop!! 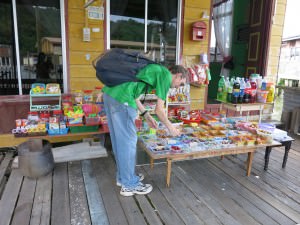 Picking my sweets for a sweetie 10p mix in Kampong Ayer – a throwback to my childhood!

I grew up in Bangor in the 1980s and when I was a kid, every week my Mum and Dad would take me to the local newsagents for a “10p mix” – basically loads of sweets in a bag. Bad for your teeth I know but I used to love it. That childhood trait has continued into adulthood, and aged 33 I took great joy in paying less than a pound for a load of sweets here! 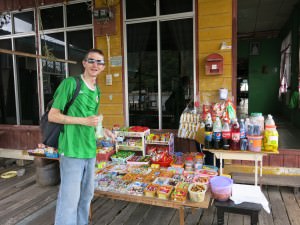 Like a kid again with my cheap 10p mix on Kampong Ayer in Brunei.

Another reason I did this was because entrance to Kampong Ayer is free and it felt good to spend some money there and help the locals – they’re not rich at all – don’t let the fact Brunei is rich in oil fool you. These people work hard to earn their crust.

5. Walking – The best thing is just to walk round and explore it on your own – there is no set route and you can find all sorts of paths past houses and mosques. It’s a feast for the eyes and a great place to see. 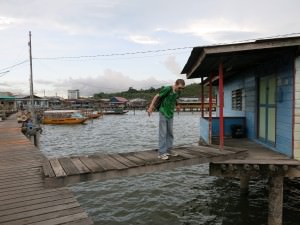 Just go walking at your own pace and at leisure around Kampong Ayer – you’ll love the randomness of it all. And it’s quiet too.

That’s really it for Kampong Ayer for this lifetime. If you’re in Bandar Seri Begawan in Brunei, make sure you get the boat across to it – it’s really worth seeing and it definitely deserves it’s “Venice of the East” title – I’d say Kampong Ayer is much better than Venice. Less tourists for a start so you’ll have the place to explore all on your own. I also wrote about how to get to Brunei from Malaysia , how to take alcohol into Brunei and drinking in Brunei which are worth checking out. A country well worth a trip. 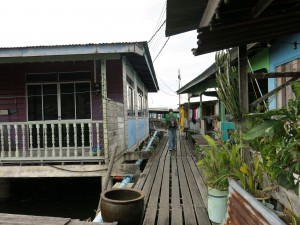 I’ll leave you with my videos from Kampong Ayer:

Boat over to Kampong Ayer from Bandar Seri Begawan Waterfront:

The Mosque on water at Kampong Ayer, Bandar Seri Begawan:

Boat from Kampong Ayer back to Bandar Seri Begawan Waterfront:

Another video from a boat in Bandar Seri Begawan: