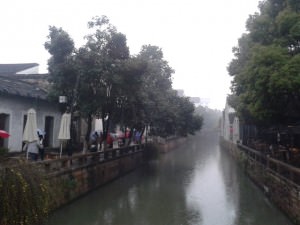 Pingjianglu Venice of the East in Suzhou, Jiangsu Province, China.

Pingjianglu in Suzhou is part of the “Venice of The East” moniker that the city of Suzhou has been dubbed with. Suzhou is situated in the Jiangsu Province of China. It is well worth the trip and again is quite off the beaten tourist track. I headed to the district/street known as Pingjianglu in the pouring rain to find out what the fuss was all about. Yes we were caught in a mega thunderstorm and torrential downpour for almost an entire day in Suzhou! Here’s an overview of the Venice of the East Pingjianglu. 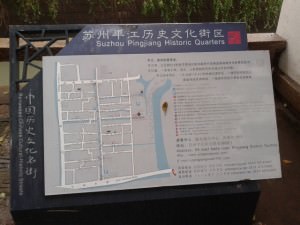 A wee sign at the entrance to Pingjianglu in Suzhou City in China’s Jiangsu Province.

It’s the most popular street in Suzhou that makes up the Venice of The East. It’s an old style Chinese street which runs adjacent to a canal. Local houses and poky streets accompany the area in and around the canal. There are gondola like boats on the water, cobblestone paths and, well a canal. 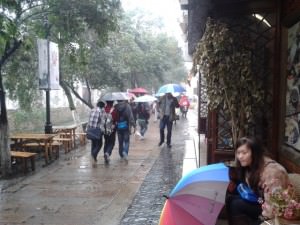 The rain in Pingjianglu The Venice of the East in Suzhou, Jiangso, China.

It is a long street in the city centre of Suzhou which sits beside a canal. It runs parallel to Renmin Lu. It has become famous for tourism due to the label “Venice of the East” but also because Suzhou’s marvellous World Heritage Site gardens have bumped up the tourist appeal of the city in recent years. 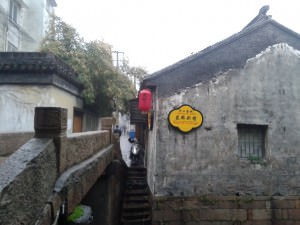 The poky side streets at Pingjianglu, Suzhou, China.

How do you get to Pingjianglu?

Like all things in China, this will not be easy for the average tourist so I won’t lie to you. From Shanghai you can get a train into the province of Jiangsu, and get off at Suzhou main train station. Buy a train ticket in Shanghai direct to Suzhou. That’s the easy part. Once you arrive at Suzhou train station you’ll need to get into the city centre. It’s a local bus to do it which costs 2RMB. 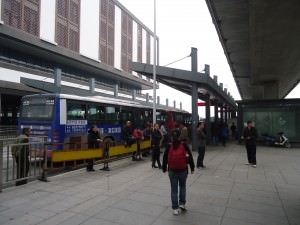 Getting a local bus from Suzhou trains station to the city centre. Not that easy, but has to be done!

The best advice I can really give you is show locals your guidebook or have the name Pingjianglu written in Chinese and English for them. Again I was with my girlfriend who speaks, reads, breathes and writes fluent Chinese. The bus station is upstairs once you get off the train. 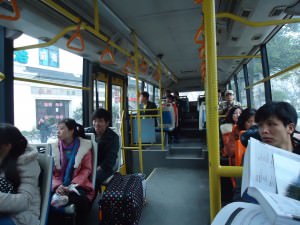 On a local bus in Suzhou, Jiangsu, China.

There are locals trying to sell you maps in the train station – as soon as they see you are foreign they will be straight over to you. I told them all I wasn’t interested in a map, but actually to be honest it’s a good idea to buy one. Bargain them down and buy a map – it will have the main sights on it – and even if it’s in Chinese at least it will get you there. 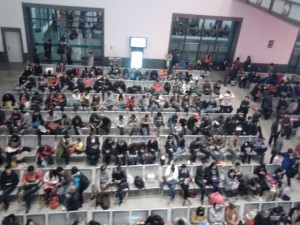 It all gets a bit manic at Suzhou train station to be honest!

What can you do at Pingjianglu?

Well you might know I’m a budget backpacker so I didn’t pay for anything. I simply walked round the area, admiring the streets and taking photos. That’s what I did. 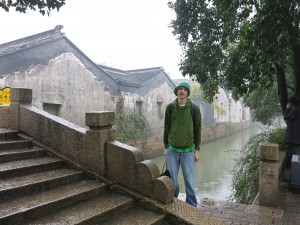 Chilling by the canals at the Venice of the East, Pingjianglu, Suzhou, China.

However here are a few things you can do near Pingjianglu (not the rest of Suzhou by the way – just in the area around Pingjianglu):

1. Have a tea or coffee by the canal (it’s not quite Venice you know)

2. Stay at the hostel in Pingjinaglu (good cheap option here)

3. The Kunqu Opera Museum (worth seeing if you’re into Chinese Opera)

4. The Pingtan Museum (Pingtan is a local art form with daily shows at 1.30pm)

5. The Couples Garden (one of Suzhou’s many beautiful gardens)

How Does Pingjianglu Compare with Other “Venices”?

It’s on a par but it’s older, more raw and more worn. I’ve now been to Venice (Italy), Bydgoszcz (Poland), Kampong Ayer (Brunei) and Tai O (Hong Kong) as well as Suzhou in China. All five of these places have been dubbed “Venice”. I have no favourite, but for some reason it always rains when I go to these “Venice” places. You might have read that I don’t like umbrellas at all, but this day I used one. Rare photo time… 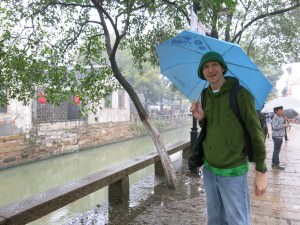 A very RARE photo – Jonny Blair of Don’t Stop Living holding an umbrella. You won’t see many of these but it POURED and POURED that day we did Pingjianglu in Suzhou, China.

What else is there to do in Suzhou, Jiangsu Province?

Quite a bit as it turns out and Pingjianglu is not the highlight by any means. The World Heritage Site gardens are the real highlight here – they are totally special and you should not miss them. I will write about the Master of the Nets Chinese gardens in another post. 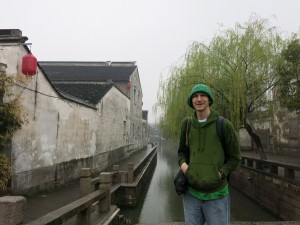 Enjoying the tranquility and freedom of the not so touristy Pingjianglu in Suzhou, Jiangsu, China.

There is also a bustling city to see here, twin pagodas, countless temples and more museums than most Chinese towns and cities. While we did it on a day trip, I’d have to say you’re better off staying at least a night in Suzhou. Spend a night here if you really want to see it – though Venice of the East Pingjianglu can be done in a matter  of hours. I must admit we rushed the city, but we really had no more time as we were on a short trip. A good place to get off the beaten track as ever! Safe travels!

Here are the videos I took at Venice of the East Pingjianglu: