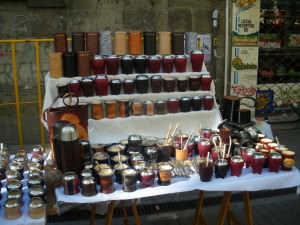 Before I go on, I fell in love with Uruguay. It’s by far one of my favourite countries and things just seemed perfect there. A relaxing place, decent beaches, great cities that aren’t too big, cheap beer and food, great bus travel, friendly people and their obsession with Mate!!! Today’s Thirsty Thursdays takes me back to Montevideo in Uruguay where I first tried Mate, the national obsession. Yes this is a Uruguayan thing, it really is. You do see them in Argentina, but to get the best Mate tea and witness the Mate phenomenon you need to head to Montevideo. 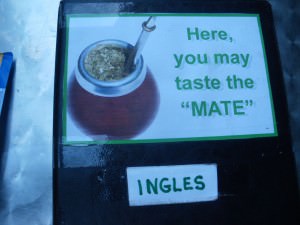 An Ingles menu for trying the Mate Tea in Uruguay

What is Mate Tea?

In short – it’s a hot herbal tea that is a national obsession in Uruguay (*and Argentina and Paraguay). If you want to know about the process of how it’s made etc. then I assume it gets grown, harvested, dried then sold. All the Mate I tried in Uruguay was green in colour. It’s like green tea leaves and it has a very distinct taste. 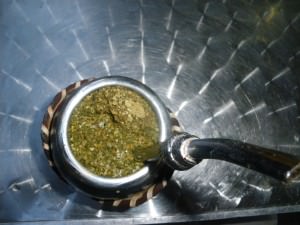 The green leaves and the classic Mate cup in Montevideo, Uruguay

Where can you try Mate Tea in Uruguay?

Believe it or not, as a tourist it is quite difficult to come by in restaurants in Montevideo. Most restaurants don’t serve it, but luckily I’m here to break the mould and tell you how to find it! 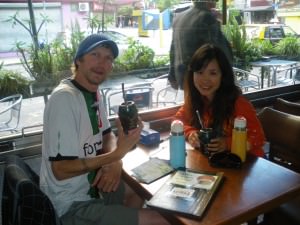 Myself and my girlfriend trying Mate tea in the Manchester Bar in Montevideo – became a bit of a regular as I was studying Spanish nearby!

Uruguayans carry their own Mate with them at all times. They take it to the doctors, to the toilets, to the beach, to the pub. They don’t even mind that they have to carry a cup of Mate everywhere with them. They literally carry it everywhere. If you get on a bus in Montevideo in the day time then loads of passengers will be holding a cup of Mate Tea. I actually got rather used to it, having studied Spanish there and living with a local family. However, as a tourist I first tried it in a restaurant…and here’s the one:

The Manchester Bar on Avenida 18 de Julio (it’s on a prominent corner on the main road, just a few blocks up from Plaza Independencia). 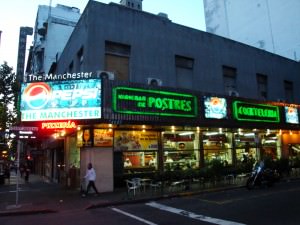 How to order Mate Tea in Uruguay:

Long answer: Once you’re inside the Manchester Bar (or another bar that serves Mate tea) just ask for 2 small ones. It cost me 60 Uruguayan Pesos each back in 2010 and inflation in Montevideo ain’t that high, so expect to pay less than 70 Pesos at the moment.

Loving my Mate Tea experience in the Manchester Bar in Montevideo, Uruguay

What do you get when you order Mate Tea in Uruguay?

This is entirely what you get when you order Mate Tea in Uruguay: 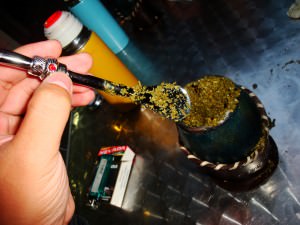 My Mate tea cup from my first visit to the Manchester Bar in Montevideo, Uruguay

– The Mate tea itself in leaves inside the container

– The typical silver Mate tea straw, which is called a Bombilla

I LOVED it. I’m big into my teas though and rarely find on I don’t enjoy. Mate is really relaxing, healthy and stimulating. In fact it helped me study Spanish and keep my travel blog up to date at the same time while I was in Uruguay in 2010. I miss it and I’d love a Mate tea now. 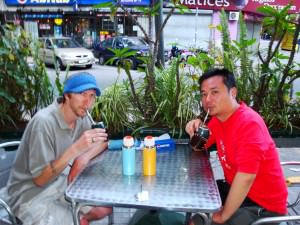 So my advice is simply try it. Mate Tea in Uruguay is a total national obsession. And I’m biased here as I much prefer withdrawn, modest and relaxed Uruguay to the brash, over arrogant and over hyped Argentina. It was the people of the respective countries that gave me this opinion. Sorry Argentina, Uruguay is much better, in every way and their Mate Tea is the best. Head to Montevideo and get your Mate tea fix – you might just fall in love…

A video of myself and travel buddy Wesley Tang trying the Mate tea in Montevideo, Uruguay:

Thirsty Thursdays is an ongoing regular feature on Don’t Stop Living – a lifestyle of travel. If you have a bar, pub, drink, restaurant, brand or idea that you would like featured on Thirsty Thursdays, please get in touch via my contacts page or my advertising page. I’d love to hear from you, and I’d also love a free tea or a beer! Cheers! 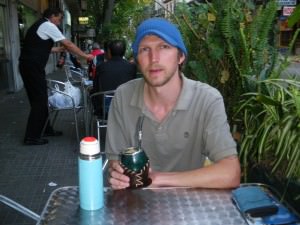