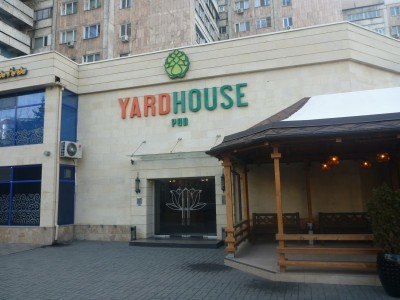 Almaty is a massive city, spreading far and wide in its elevation beneath the mountains of southern Kazakhstan. At first, finding a bar seemed like a difficult task for the walking backpacker. So I used my maps and advice from the staff at the Almaty Backpackers hostel and soon I knew I was able to tour some of the city’s bars by day and night, securing a favourite in Bochonok, one of my top bars from the last month or so of travel. I was in Almaty for five days and managed to visited five bars that I liked. Of course there are many more I didn’t get to, but for this time, on this journey, these are my top 5. 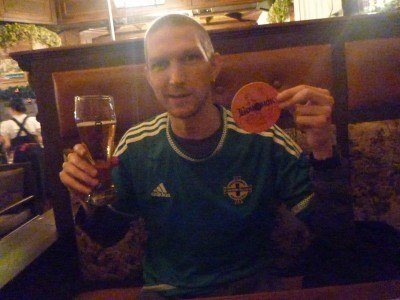 1.Bochonok
Standing head and shoulders above the rest is the lively and welcoming Bochonok bar. I headed here with a local lady, Mira from the hostel on Christmas Eve and before we knew it we were up singing and dancing with Kazakhstani versions of Santa Claus and Mary Christmas. We won competitions for free food and beer on a a memorable night. 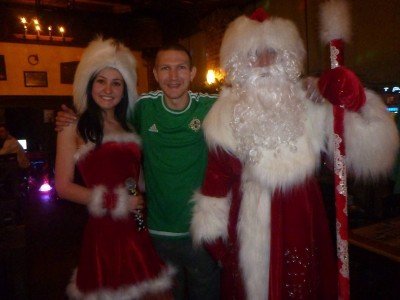 A marvellous night on Christmas Eve 2015 at Bochonok

Bochonok became a regular haunt for the next four nights and the staff knew me by the end of it. I also spent a quiet afternoon in here typing up articles and responding to e-mails. It has fast WiFi. 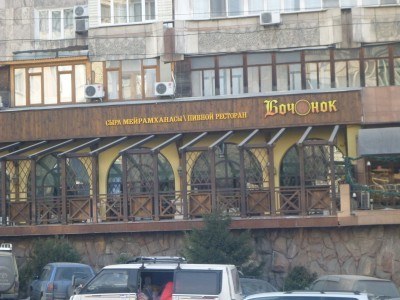 For a central bar (it’s on Furmanov Street), the prices were brilliant. Beers for 499 Tenge, local Kazak beer too. That works out at under £2 a pint. The bar also shows live football from Spain, England, Russia, Germany and Kazakhstan. This bar is the cheapest on the list, has the best food, the best décor, the best staff and is an overall gem. If you’re backpacking in Almaty, don’t miss it! 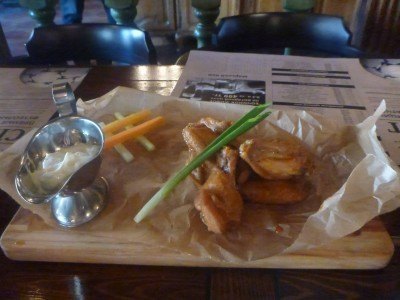 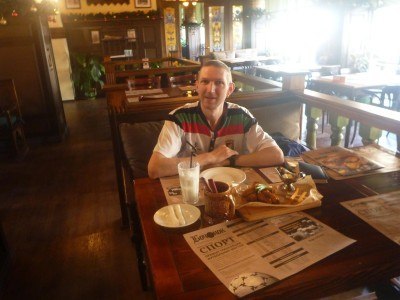 2.Shakespeare Pub
This British themed pub was a fair bit more expensive, and also has WiFi and live music. However it was definitely worth the walk to (it’s down towards the bottom of Dostyk Avenue) as they have a beer called Line Brew on tap, which is local and I didn’t see it anywhere else. The staff speak good English and were in a happy Christmas vibe on my visit. 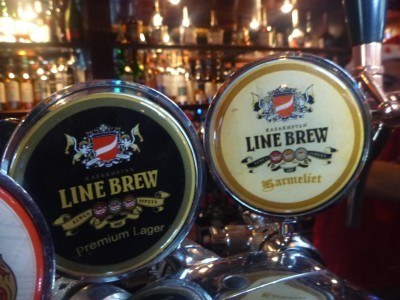 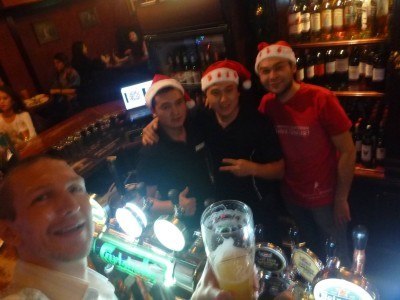 A party on Christmas Night in the Shakespeare Pub, Almaty

It is popular for British and American immigrants which may have helped with the price inflation. As a result they also have foreign beers on tap for a premium. 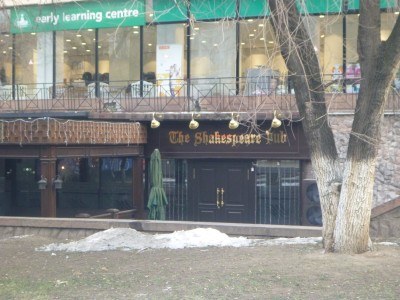 3.Yard House
Relaxed by day and like a party bar by night, Yard House is a good option and one of the closest pubs to my hostel at Almaty Backpackers. I popped in for my fix of Russian beer and Mexican food(!). 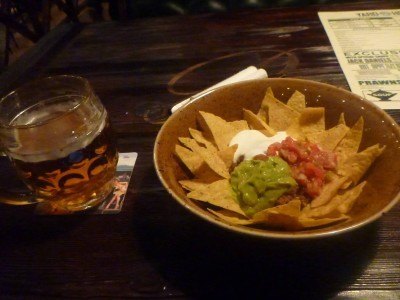 It also has WiFi, live music in the evening and football on TV. It’s probably the most upmarket looking on my list, yet prices seem more reasonable than in Shakespeare. 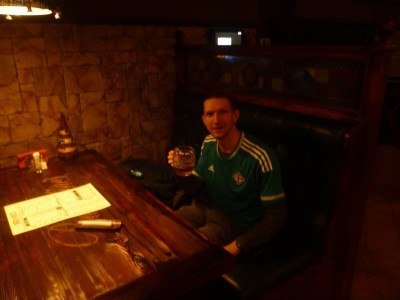 A beer in Yard House Pub 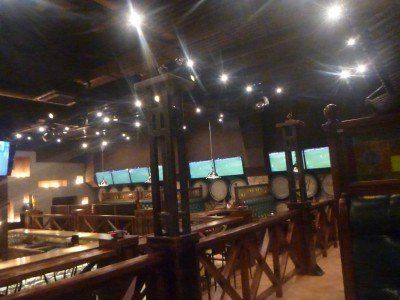 4.Guinness Pub
With a name like Guinness Pub, this one caught my eye but failed to live up to expectation. The Guinness sign was just for show really, as inside it wasn’t really an Irish Pub. More of an odd bunker bar and with Guinness and Kilkenny costing more than 1,100 Tenge (more than double the price of my beloved Kazak beer in Bochonok), it was a quick beer (cheapest on the menu was 800 Tenge) and then I left. 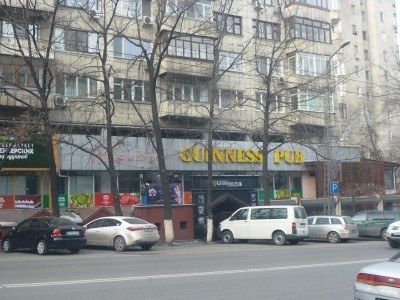 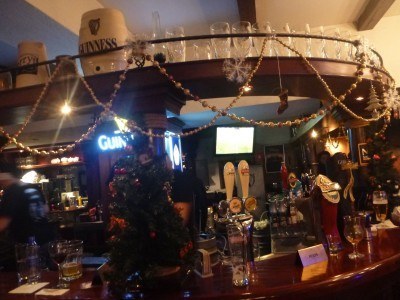 5.Cafe Central
Situated on the edge of Dostyk Plaza on the corner of Dostyk Avenue near my hostel, Café Central is a dearer option with a bit of class. I popped in for a quick Corona and bite of Sushi, they have no beer on tap and only a few local food types. 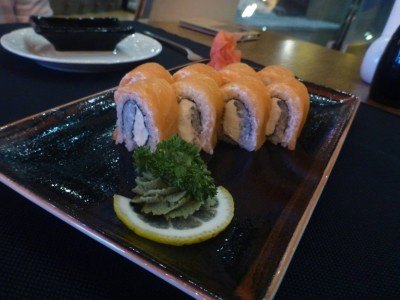 Beer and sushi in Cafe Central

It’s worth a quick beer and they have live music on piano here and it’s where the richer folk hang out. Wearing a Northern Ireland shirt and tracksuit bottoms, I loved it though! 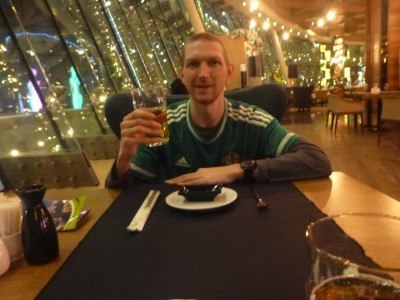 Living it up in Cafe Central, Almaty 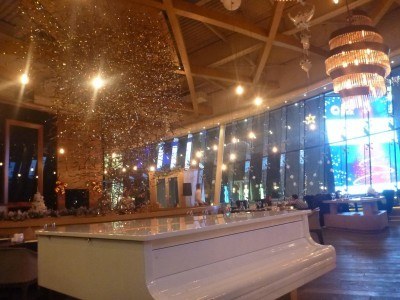 So that is my cool top five, but from reading it, you’ll gather I could have made it a top 1, with Bochonok the clear winner. What a bar! 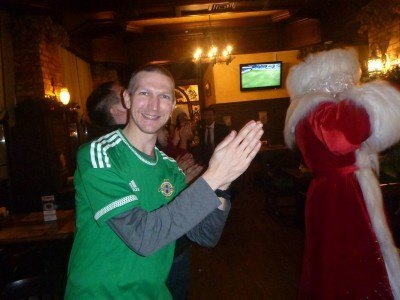 Up dancing on Christmas Eve in Bochonok, Almaty, Kazakhstan

Here are some videos of my time in the bars of Almaty: