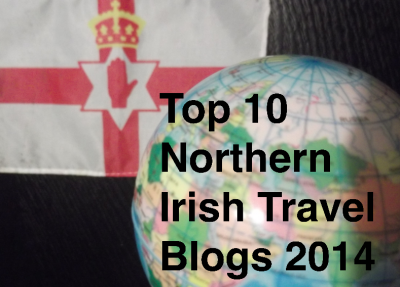 This is the second year I have compiled a Top 10 Northern Irish Travel Blogs list. Following on from last year’s best Northern Irish Travel Blogs, here are the best 10 out there this year in 2014! A few changes, some dropped out and some got added – it’s top of the pops style. In fact there are now 3 new entries and 3 have gone. The top 10 is now an even gender split too – so well done ladies – 5 guys and 5 girls in there. Congratulations to everyone that is included, I’ve enjoyed compiling it once again and catching up with all your stories. I’ll be doing the next one in January or February 2015. 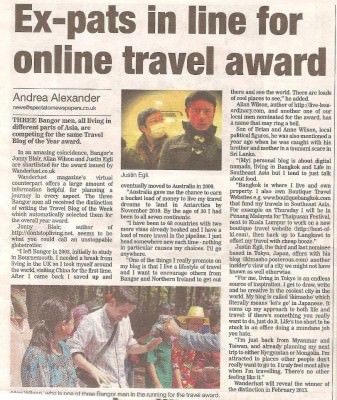 Last year, 3 of these top 10 Northern Irish bloggers were included in the County Down Spectator as they fought it out for the Wanderlust prize!

On my own travels, I bumped into Patrick Burke who is hitch hiking from Belfast to Beijing, so he’s straight into the mix with his “Finding Patrick Burke Blog”! I also met up with Allan Wilson of Live Less Ordinary in 2013! There is still no room for golfer Rory McIlroy however 😉 Also of note, the County Down Spectator in Bangor Northern Ireland featured three of these top 10 travel writers in a print article in January 2013 due to their battle to become Wanderlust Blog of the Year (just after the last list I made). Allan Wilson, from Bangor won it.

These are in alphabetical order as usual but by gender this time, perhaps next year, I’ll make it a top 15 or 20 and have an order based on readers/viewers, domain authority, page rank etc. For the meantime though – we’re not in competition with each other – we’re writing and travelling the world being Northern Irish. We’re all proud of each other’s blogs. 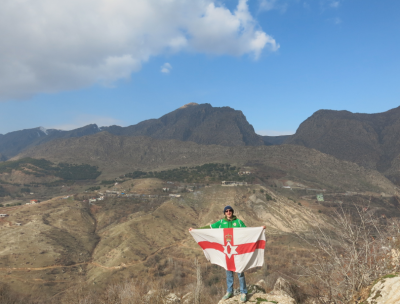 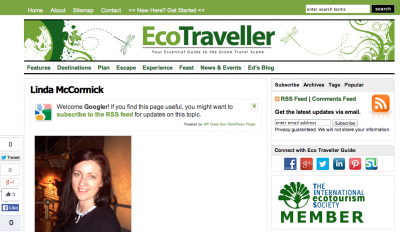 A new entry for Linda even though she’s been in the industry for yonks! Linda is a founding member of the Professional Travel Bloggers Association and writes passionately about being green and eco friendly on her ventures. Linda comes from that enigma of a city. Is it Derry or is it Londonderry? :-p 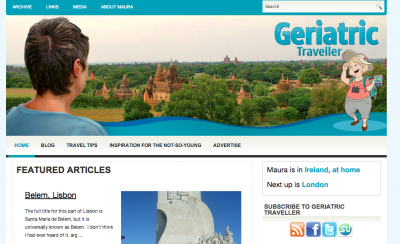 Maura Ward maintains her place with her worldly blog which tells you how to live a little, even though Maura’s not a teenager anymore. I found out that Maura managed to backpack her way to places like Uzbekistan and Kryzkstan in 2013! Now that’s dedication! Definitely one to watch and keep up with. I bet she still loves sitting with a cup of tea in Kilkeel staring at the Irish Sea though.

If you remember back to last year’s list, Helen was one of four Ulster folk up for the Wanderlust Blog of the Year award! This year she travelled around once more – hiking up Adam’s Peak in Sri Lanka and won yet another travel writing competition. Helen’s writing is superb.

4. Life in a Rucksack by Abbi Morrison

Abbi long ago gave up life in Coleraine to explore the world. This year she has worked full time in New Zealand, exploring her current residing country as much as she can as well as travelling to South Korea and Australia. Abbi mixes off the beaten track stuff with obvious tourist places with much aplomb. She’s not afraid to admit she sometimes packs too much into her rucksack life. 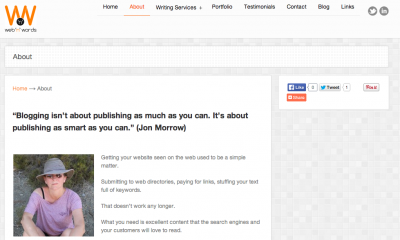 Julie is a new entry and I’ve included her because her blog is an excellent resource for SEO writers, new bloggers and anyone into social media. Julie is also currently in London, so not based in the six counties. She doesn’t directly write about her travels on her main site, but you can bet your life she’s tried more cuisines than an Ulster Fry or a packet of dulse. 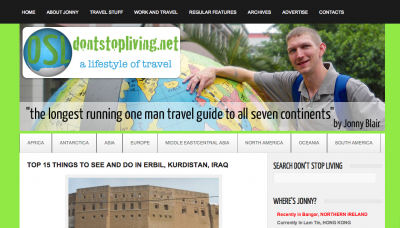 You’re already reading my own travel blog, Don’t Stop Living so welcome. I’m Jonny Blair. Having left Bangor some 11 years ago I’m now on a conquest to travel the world and write about it. I cracked the 80 country mark in 2013 and also visited 10 Chinese Provinces, 15 new countries and some off the wall obscure spots like Jiangling, Sulaymaniyeh, Vank, Ramallah and Shahr-e Kord. There’s no bias involved in self inclusion either – my stats are up with the rest on the list as the other 9 NI bloggers will testify and I made it onto the BBC last year thanks to my travelling NI flag stories. Hope so anyway 😉 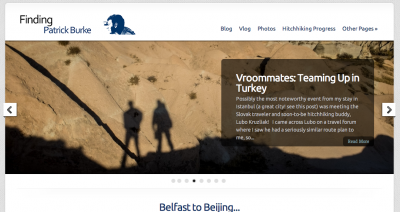 Patrick’s blog has a cool story to it – he is hitch hiking all the way from Belfast to Beijing. Now that’s hardcore. I tracked him down to India at present and earlier randomly met up with him in Turkey and Iran (by chance). Check out the stats page on Patrick’s site which details who all has given him lifts and how many endless hours he has spent waiting for free rides. 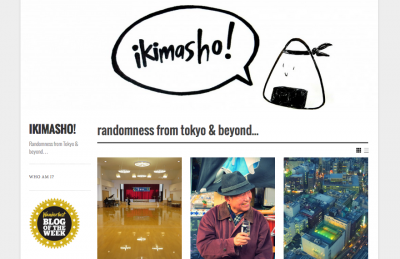 This year has seen Justin Egli’s site Ikimasho (Japanese for “Let’s go”) go from strength to strength. Endless posts filled with laughter, real life experience and quirky wit will have you reading, and reading, and reading! Justin is out in Tokyo most of the year but as you can tell he loves a bit of adventure. He spent Christmas with some Indonesian Gangsters and climbed an active volcano. Endless charm and wit. He’s originally from Bangor, too. 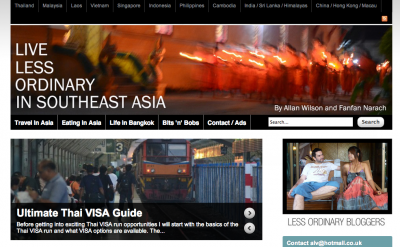 Bangkok based Bangor man Allan Wilson won Wanderlust’s Blog of the year last time round! It’s easy to see why. His passion for writing is clear, his honest raw tales keeps you on the edge and his deliberately opaque sarcasm pisses off the moaners and keeps the lovers in love. I’m not even sure Allan knows that the title of his blog was also a hit for Downpatrick rock band Ash back in 1997 (A Life Less Ordinary). Allan knows his stuff about South East Asia so check his site out please!!

So that’s it folks for 2014. Thanks to all those on the list who travelled, blogged and entertained us all in the last 12 months. If you know of any Northern Irish travel blogs (or travel related) that are not on the list and that fit the criteria, please drop me a line: