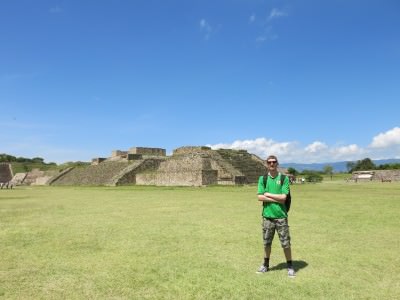 When you have travelled for years on end through more “lost cities” than you can think of (Sigiriya, Machu Picchu, Teotihuacan etc.) the idea of yet another one might sound like more of the same. However Monte Alban was a pleasant surprise. 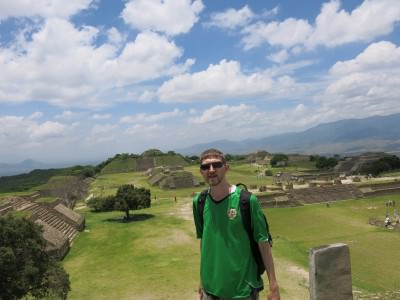 Situated on a mountain top only a half hour drive from Oaxaca de Juarez in Mexico, this place is well worth a trip. As of 1987 it has also been a UNESCO World Heritage Site. This has meant more money invested into it and yes…more tourists 😉 Of which we were two! 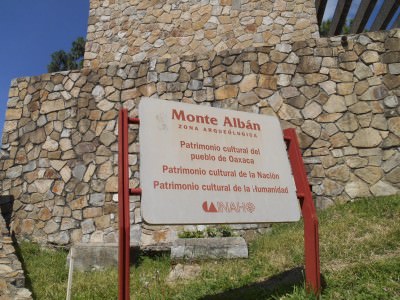 How to get to Monte Alban
We did it ourselves but used a touristy bus to get out there. The return ticket for the bus was 50Mexican Pesos which is only about $4US, so $2US each way is pretty good. Buses leave frequently from numerous points in Oaxaca’s Hotel Zone. We used Autobuses Turisticos who have an office based on Avenida Francisco Javier Mina street in Oacaxa de Juarez. 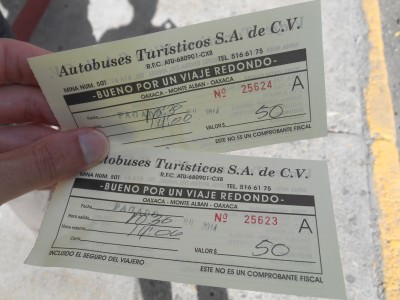 Our bus tickets from Oaxaca de Juarez out to Monte Alban.

Do not be fooled by people offering you the bus on the street. They will try to charge you 60 Mexican Pesos or more. 50is the maximum you should pay for the return. Buses leave regularly from 8.30am they are every hour until 15.30pm. 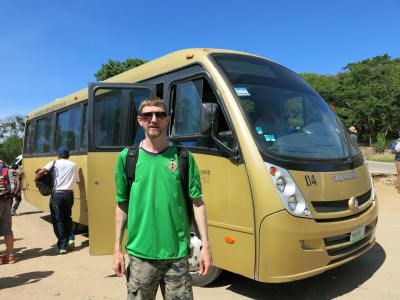 You can also arrange guided tours out there from Oaxaca. The tours can also include visits to waterfalls and other sites in the region. Expect to pay upwards of 200 Mexican Pesos for any such tour. 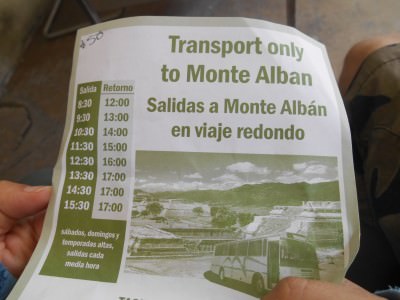 Bus From Oaxaca to Monte Alban
The bus journey is smooth, scenic and uphill. It takes around half an hour. As you soar up the hills you can admire the views down over the city of Oacaxa de Juarez. 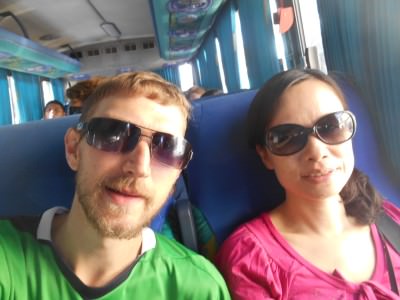 On the bus to Monte Alban. 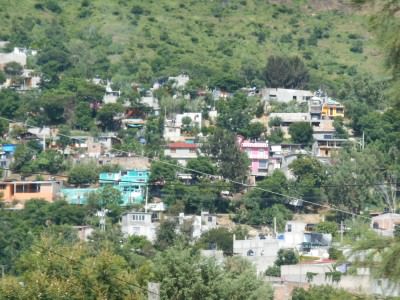 Views from the bus to Monte Alban

Entrance Fee for Monte Alban
As it’s a UNESCO World Heritage Site there’s an entrance fee. It’s a flat rate of 59 Mexican Pesos to get inside. That’s under $5 US Dollars. This includes access to the entire site and the museum. 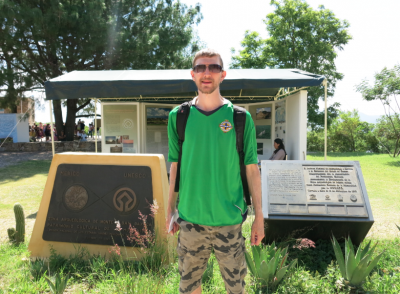 We paid it and we recommend you pay it too. You could just walk round the side and get in for free in all honesty. The tickets are checked and ripped at a small turnstile entrance but we barely noticed it. 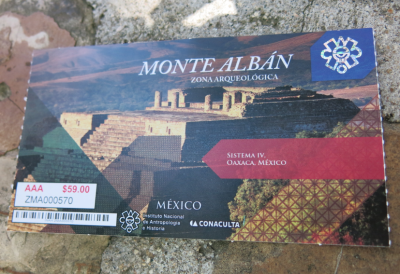 Best Bits of Monte Alban
It’s a decent sized for a ruined city on the mountain and unless you’re a complete architecture and archaelogical freak, I’d say 2- 4 hours is enough time to see it. We spent about 3.5 hours there.

1. Platforma Sur
The South Platform gives a good vantage point over the lost city. It is accessed up steps behind the Gran Plaza. 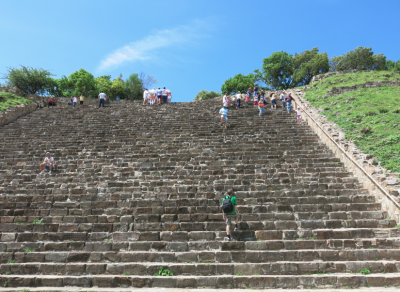 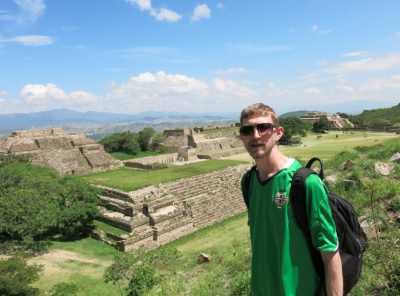 View down into Monte Alban from Platforma Sur.

2. Gran Plaza
The main square is called Gran Plaza and offers an insight into what the city centre may have been like. Wander around at leisure reading the information in 3 languages and admire the buildings, including one for astronomy. 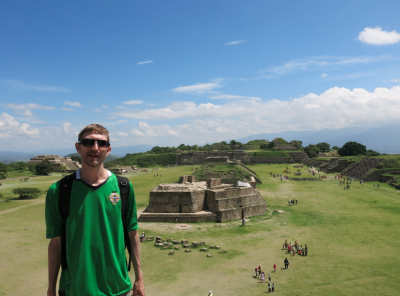 In front of the astronomical building in Gran Plaza.

3. Patio Hundido
This hidden patio is sunken into the ground and not visible until you climb the steps up to the main part of the city. Above the Patio Hundido are many more view points and ruins. 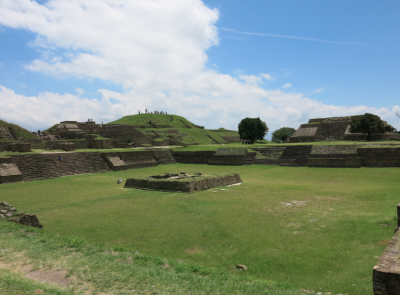 4. Galeria de Los Danzantes
This custom built mini display of rocks has inscriptions and carvings on them. They have been moved from their original position to form a gallery. 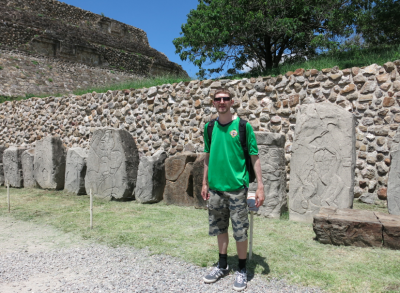 5. Monte Alban Museum
The Monte Alban Museum gives a good insight with a lot more detail and writing into what happened here at the settlement of Monte Alban. People lived here for hundreds of years and then stopped and nobody seems to know why. 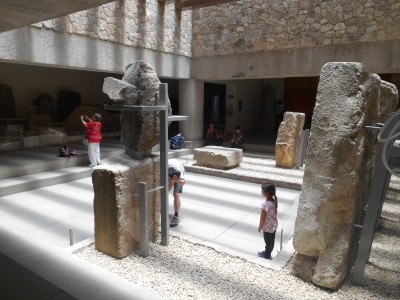 It is also essential to enjoy the fantastic views that Monte Alban offers while you are here. You get a great view of the mammoth-ness of Oaxaca de Juarez as well as over the immense Mexican countryside. 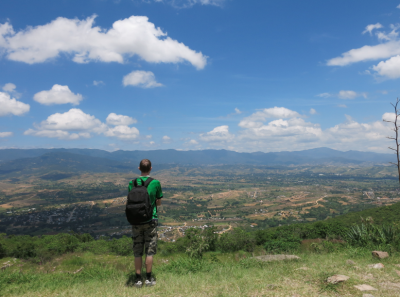 View of countryside from Monte Alban. 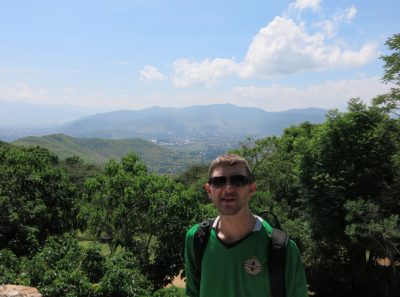 View of Oaxaca from Monte Alban.

Monte Alban is at an elevation of 1,900 metres above sea level.

Once you’ve done your 3-4 hours here head back on the bus to Oaxaca de Juarez (the price of 50 Mexican Pesos includes the return). 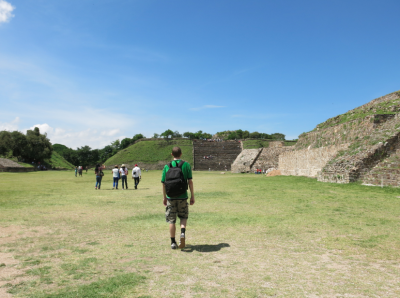 While I don’t sit and count the UNESCO World Heritage Sites I have visited like some arrogant travel bloggers out there, I must be somewhere near 200 by now and I am keen to visit more of them as they are listed on UNESCO for a reason!

Here are my videos from touring Monte Alban in Mexico: