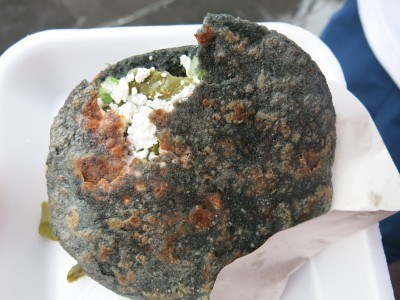 Without much doubt or competition my favourite country (outside Northern Ireland) in the world for food is Mexico. I simply love Mexican food. I am not a big eater as most of you know, yet every day when we backpacked through Mexico, I was eating THREE meals. That’s three decent sized meals a day, all deliciously Mexican, all mixed varieties, all healthy and tasty and all cooked expertly by Mexicans. I take my sombrero off to the country – you have the best food in the world, besides Northern Irish grub (which, I’m probably slightly biased about). 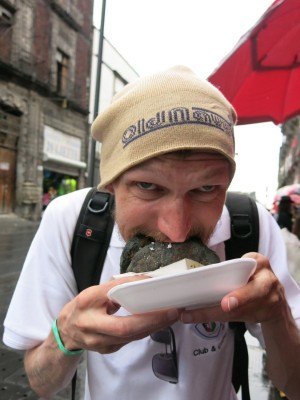 As a result of my obsession for Mexican grub, I could run a Friday’s Featured Food and Thirsty Thursdays for months on end based only on my Mexican food experiences, yet I’ve only touched on a few of them so far. Well it’s a busy life and I can’t write about every meal I’ve had. This week on my Facebook Page you were voting for which one I would write about today and Mexico won hands down, tits out. 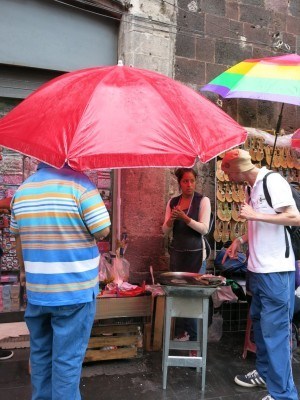 In Mexico City I kept eating and drinking, in Cantinas, in bars and at the Casa San Ildefonso. Backpacking through the city centre, it was always “let’s stop for more Mexican treats”. I had tried Mexican style tortillas many times before of course, but mostly in restaurants abroad. But I had never ever seen or tried a BLUE one. 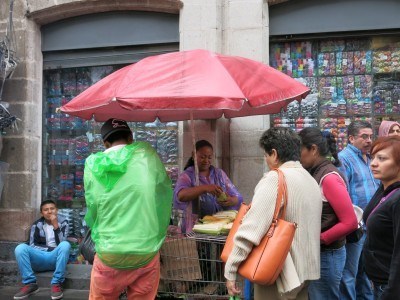 At a street food market in Mexico City

Blue Corn Tortillas in Mexico
Blue corn tortillas became an obsession as I backpacked through Mexico City, San Cristobal and Oaxaca, they have 20% more protein than white tortillas. I first tried them on a street in downtown Mexico City. It was raining, I was hungry and we launched in. 20 Mexican Pesos for 3?! Seems like a bargain to me, but we found them later for even cheaper. 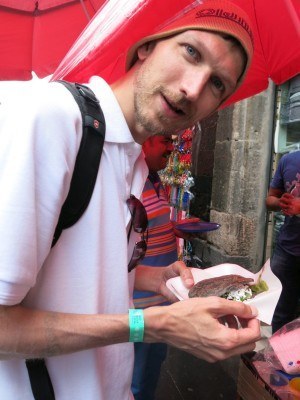 Cheap food at a downtown market in Mexico City

Inside the blue tortilla it is up to you what goes in it. I tried them with all sorts of contents: chicken, beef, cheese, vegetables and chilli and spices. Mexican food allows for a huge variety of flavours to be put into a consistent product, much the way like pizza in Italy works. Make the base, add tomato and cheese and then whatever you want. Grab a blue tortilla, put what you want in it and scoff the she-bang. 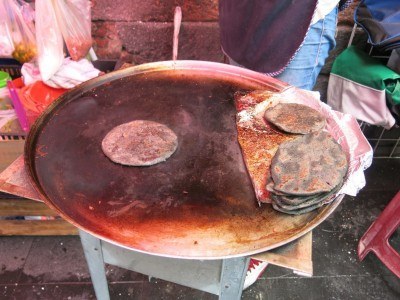 My BLUE Food Obsession
I have an odd food confession to make – I’m a sucker for BLUE food. I’m just fascinated by it as it’s a colour that doesn’t really have many natural foods. I love Danish blue cheese, I love anything with Blueberry in it, I loved North Korean Blueberry wine, I even eat blue smarties. The taste difference doesn’t even matter to me – it’s the novelty I love. Anytime I see any blue food, I’m all over it and that includes that time I had cheesecake in Brunei. 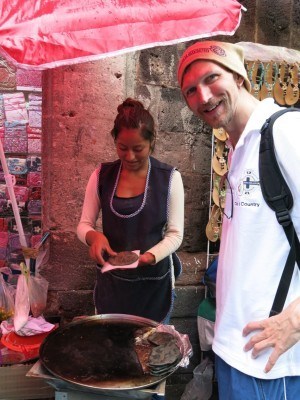 Oddly for me I couldn’t find a video of trying the blue tortillas and I normally document as much as I can on film, having over 10,000 travel videos on my channel. Here are some other food videos from Mexico: