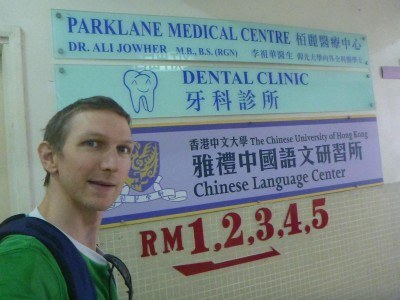 Saturdays were always my day off as a blogger. I tended to write my Saturday and Sunday stuff during the week and take Saturday off. It’s football day and I should be down Dean Court or the Oval. Even in a flash of inspiration, I’d jot my ideas onto a piece of paper and type it up later. Saturdays were also completely bereft of a regular feature on this site even though I once toyed with a “Sporty Saturdays” regular section. However, if you follow my journeys on the DSL Facebook Page, you’ll be aware recently that I am back studying at my third different University now, having recently registered on a course in Cantonese in Hong Kong. Yes, until I go hardcore backpacking again in September, I am a part-time student again! 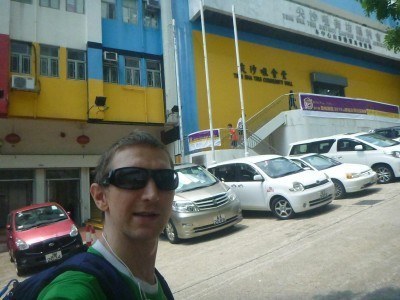 Nervous first day back as a student in Hong Kong

In order to keep my entire travel and lifestyle site on here and in some order, all my stories of studying on my journeys and in my life will eventually be put into this new section, called “Studying Saturdays”, the final of the seven day features on DSL over the years. To kick things off today I report on my most recent study adventure, I present you with Studying Saturdays: Learning Cantonese at the Chinese University of Hong Kong as well as an introduction to my own studies. 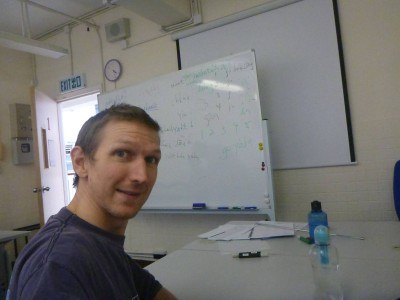 Back at the desk in uni in Hong Kong. Seriously, a little scared!

Despite what you might think, I love to read, I love to study and I love to learn. I buzz off it. I am never far from reading a book or visiting a new website full of information. I want to learn more and more things every day and I’m always keen to discover new things about the world as I go. Even for Thursday’s article on the Vatican City border this week, I had an excrement load of research for it. I am always eager to enhance my education and my general knowledge of life on planet earth. 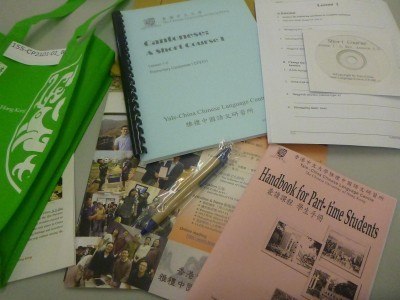 As this is the first post on Studying Saturdays I’ll give a quick overview into my own education through the years so you get where I’m coming from up to this point. I went to playgroup (kindergarten) on the street I grew up in, Marlo Drive in Bangor, aged 3-4. Aged 4-11 I studied at the local Primary School in Bangor, Northern Ireland. I attended Kilmaine Primary School and last year, 2014 saw our thirty year reunion dinner and school tour. It was in my final year of Primary School that I developed my first Wanderlust, when I went on my first backpacking journey without my parents. I was only 11 years old and we went to the Netherlands, a trip I later released as an e-Book in original diary form. I loved my Primary School, loved it. I love the 1980s. Northern Ireland qualified for EVERY World Cup in that decade and I had a crush on Charleen from Neighbours.

“Come on baby, do the locomotion” – Kylie Minogue 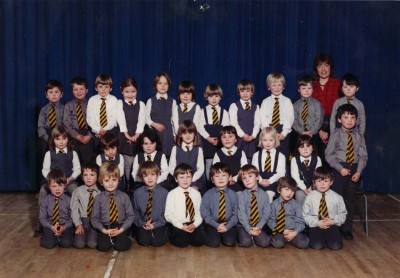 Aged 11 I started Secondary School at Bangor Grammar School in my hometown, turning down an offer to attend Regent’s House School in nearby Newtownards where I was born. But this time, I hated my Secondary School with a passion. Some kind of teenage angst was around the Northern Irish Air I walked in at the time. With terrorists on the streets, Kurt Cobain suicides, the Manic Street Preachers album The Holy Bible and fake ceasefires in Northern Ireland, there was nothing to do except be mischievous. In 1994 my best mate at school was Paddy Campbell and the pair of us nicked an exam paper one day and Paddy got expelled. Incidentally, the story of Paddy Campbell nicking the exam paper is the most read story of all time on this website, that’s crazy isn’t it? It’s a travel lifestyle blog which began in 2007, yet my 1994 theft story makes the headlines! I kind of find that funny and ridiculous at the same time. Nobody cares how I backpacked through Iraq, but you do want to know how we nicked the exam paper!

“When I think back on all the crap I learnt at High School, it’s a wonder I can think at all” – Paul Simon 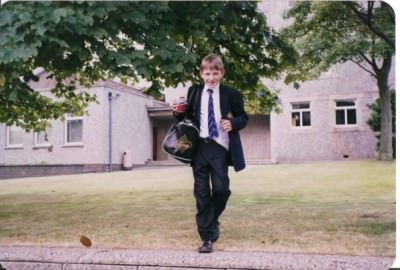 On my first day at Bangor Grammar School – I hated it

The aftermath of the Great Exam Heist left me lonely in my teenage years at school, but by 1997 I had quit the authoritative, over bearing arrogance of Bangor Grammar School and I was out studying and working in Belfast City, Northern Ireland’s ice cool capital. It was here where the real world began for me. I passed a media qualification at Belvoir Tech with aplomb, helped with an election campaign, got drawn into politics, worked in a few newspapers, released my own football fanzine, continued writing as a freelancer and went to Oasis gigs and on pub crawls of Belfast and Dublin. After a load of dead end jobs, I got sick of slicing meat in local butcheries and making phone calls in banks, so eventually did a Foundation Studies Course at Ards Tech, affiliated with Queen’s University in Belfast in 2002-2003. I passed with walking colours but wasn’t even there to wear a gown and graduate from my homeland’s University as I had moved to England before the ceremony took place. 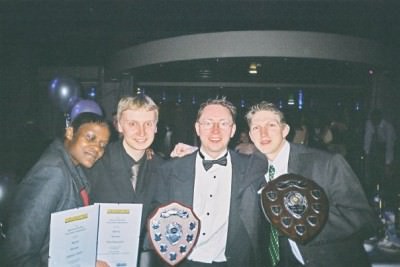 The night we won the National Student Video Awards in Lougborough, England.

By 2003 I was now in Bournemouth in England and enrolled at a Public Relations course at the University in town. But it wasn’t all about reading books for me – I was juggling a degree with various part and full time jobs, running a fanzine, chairing a football supporters club, being a DJ on Nerve Radio mixed with a heavy drinking social life, I struggled to fit them all in. So much so that the highlight of my entire degree were not even related to the degree! My top two moments were starring in the fake Big Brother the Lock In and the night we got sloshed and collected awards for Bournemouth at the National Student TV Awards in Loughborough! I also went backpacking round Europe, Asia, North America and New Zealand during my degree. But it took me 5 years to get the degree as I broke my arm in the first year and my leg in the final year. I’m clumsy and useless. I had to come back from a backpacking jaunt to try and finish my degree in 2008 and I got it in the end. Phew! It was nice to be included on the Bournemouth University website when I cracked a century of countries. Much cooler than a degree, right?! RIGHT!

“Damn my education, I can’t find the words to say” – Liam Gallagher

2008 – Later than most, I finally graduated at Bournemouth University (travelling definitely played a part in my late graduation!)

After my Public Relations degree (which let’s be frank it’s “just a piece of paper”), I did a load more part time study courses on my travels, in Australia, England, Uruguay, Honduras and Hong Kong including my RSA, RCG, Seafaring certificates, deep sea diving and learning Spanish in Uruguay. 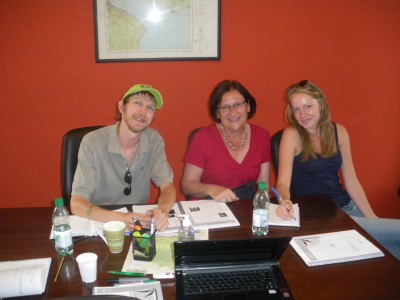 OK so that all bored you but you get the idea. I never put education first but I always tried to squeeze it into my life. This week, at the ripe old age of 35, I enrolled as a new student on a Part time Cantonese Short Course. I’m learning Elementary Cantonese at the Yale-China Chinese Language Centre in Tsim Sha Tsui in Kowloon, Hong Kong. The course is for non native speakers and is a highly regarded course with expert teachers. It’s part of the Chinese University of Hong Kong, which makes it a high standard and much more official than a lot of other places you can learn. Also officially this is the third University I have attended in a third different country. I’m leaning towards a hat-trick eventually. 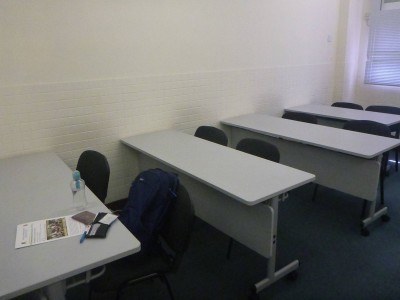 The course is housed in classrooms in Tsim Sha Tsui and there are daytime and evening classes available. Of course I opted for the day time classes. I learn more and can concentrate better on studying in day light hours. Plus the evening courses will be full of people who work in day time jobs and being a professional travel blogger now, my mind just couldn’t cope with being around people in that mindset anymore. 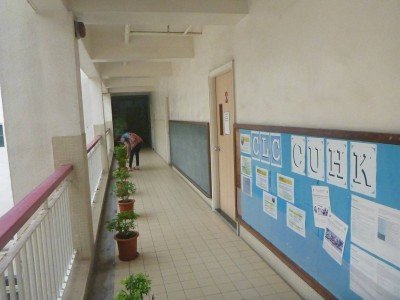 So I’m really happy with the way the course is going so far. I’m in University just two days a week and due to my travels, I am only doing a small part of Module 1 of Elementary Cantonese I. But it’s a start. There are 6 others on my course and I am the only “Ghwy Low” (White ghost/Caucasian) on the course. My teacher is Wuh Sinsaang. I will update more about the course after I’ve studied a lot more lessons.

You might wonder why I have spent so much time in Hong Kong without learning the language (Cantonese) before, so here are five reasons why I’m only getting round to learning it now:

1. All the jobs I had in Hong Kong were in English Speaking environments (Internations, Delaney’s and Teaching English).
2. When I was in Hong Kong before, I was working for others rather than myself and I didn’t have time to become a student.
3. You can get by in Hong Kong using English so foreigners become lazy.
4. I’m using Hong Kong as a base this summer so the timing was perfect this time.
5. I am not good at learning languages, so it needs to be the right time, place and environment for me to start. The time is now right.

Here is a full list of all the educational institutions I have attended so far:

Here is a full list of academic qualifications I have gained from life so far:

And I’m not finished with education yet, I assure you! In fact, I’ve got to go and get some home work done, I’ll let you all know how the course goes before I jet off to Copenhagen and the Faroe Islands in September!

8 thoughts on “Studying Saturdays: Learning Cantonese at the Chinese University of Hong Kong”