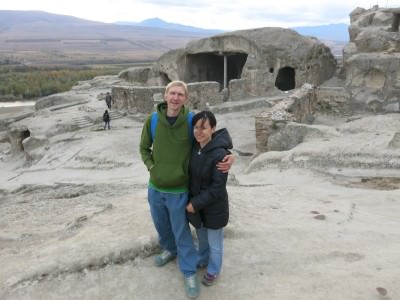 My girlfriend and I at Uplistsikhe Cave Town, Georgia.

Georgia is famous for having a load of these “cave towns” and while you’re backpacking in the area, you really should try and get out to at least one of them. The top ones are Davit Gareja and Uplistsikhe. Our visit to Uplistsikhe was a bit extra special for me as I was joined for a few days in Georgia by my top Polish mate Rafal Kowalcyk. After a heavy night on the town in Tbilisi, it was agreed we get up early and do an epic double header – visit Stalin’s hometown of Gori and then head out to Uplistsikhe, a cave town out in sparse countryside. It was my girlfriend Panny Yu, my mate Rafal and his mate Kamil who headed out there! 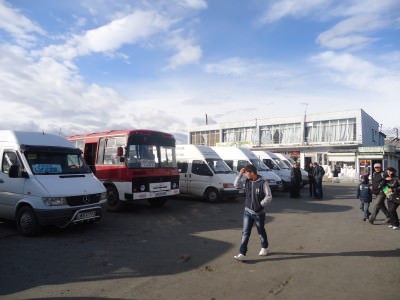 Getting a Marshrutky to Uplistsikhe from Gori, Georgia.

How do you get to Uplistsikhe?

The main two options are share a car/taxi or get a Marshrutky (shared mini-bus). The Marshrutky is the cheapest and backpacker style option,so we did that. To get to Uplistsikhe, head to the main bus depot in Gori and ask around. The drivers and locals will point you in the right direction. We had a bit of a laugh about it all though, as we couldn’t pronounce the name “Uplistsikhe” properly the entire day. We nicknamed it “Up – something” – yet somehow all the drivers understood. 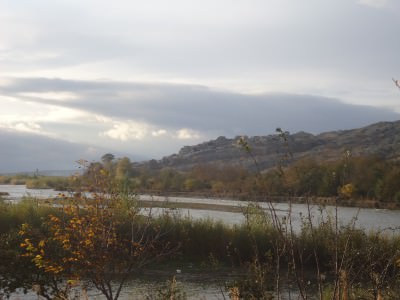 The Marshrutky left us here and we walked round to the entrance to Uplistsikhe.

How much does a Marshrutky to Uplistsikhe from Gori cost?

We paid 1 Lari each – it’s a steal at that. 40 Euro cents roughly. You might have to pay more from other towns though. Gori is a good place to get there from – it’s really close and throw in the bonus of visiting the Stalin Museum (report to come). 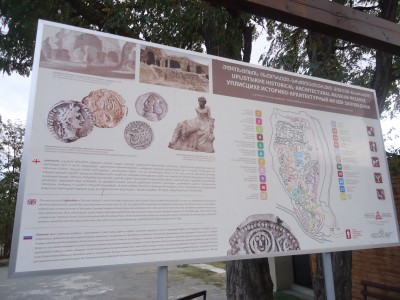 Information board at uplistsikhe georgia.

The Marshrutky being the cheaper option doesn’t quite leave you at the entrance to Uplistsikhe. So once you get off there’s a 10 minute walk across a bridge and round a bend. Dress up warm – it gets cold and windy here – it was remote! We were the only 4 backpackers doing it by minibus then walking. Everyone else took taxis or went with tour companies. 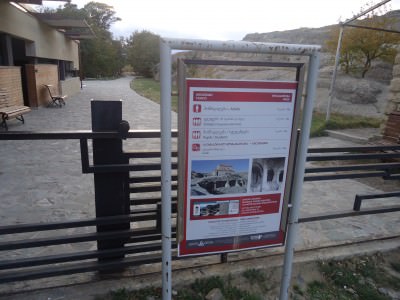 It’s an ancient cave city! It’s awesome and dates back to between the 6th – 1st century BC!! It is totally worth checking out. For me, it wasn’t just the ancient cave city itself, but the extreme countryside and wilderness of rural Georgia – an added charm to your adventure to Uplistsikhe. 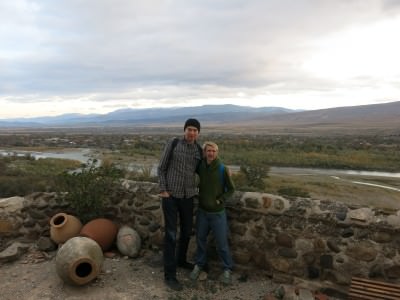 My good mate Rafal and I at Uplistsikhe Cave Town, Georgia.

Uplistsikhe was actually a religious centre, hence the housing of an excellent church on the top of the cave city – the centrepiece of Uplistsikhe. The church/temple is an example of pre-Christian Kartli. The area also acted as a go between/stop off point between Europe and Asia for trade. 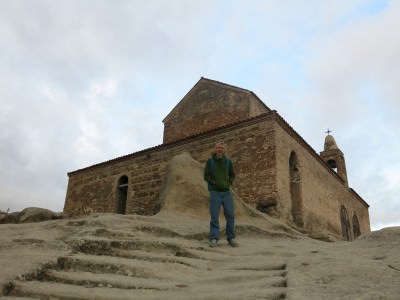 Outside the church in the cold wind at Uplistsikhe, Georgia.

How many people lived in Uplistsikhe?

It might be hard to believe when you backpack through it, but Uplistsikhe once housed 20,000 people, so yes it’s OK to call it a city. Machu Picchu is a city after all, and nobody lives there nowadays either! I must tell you though that Uplistsikhe did used to be bigger and was destroyed. Archaelogists uncovered the site in the 1950s and have made a lot more of the caves now visible and easy to visit. 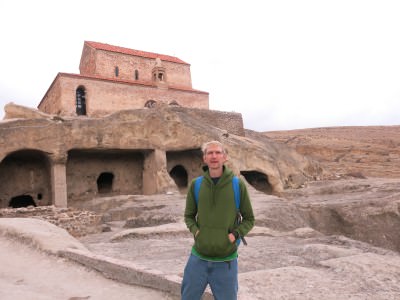 How much does it cost to enter Uplistsikhe?

It’s a current one time ticket price of 3 Lari (just over 1 Euro) that covers you all day. Children, students and OAPs get in for less. 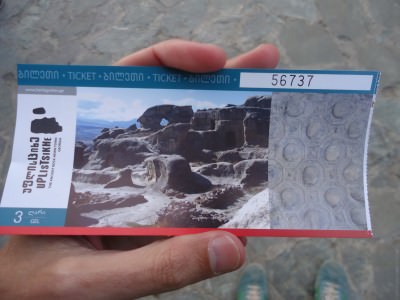 3 Lari for a ticket to Uplistsikhe Cave Town in Georgia.

When is Uplistsikhe open?

It’s open from 11am to 6pm at present though this does change so keep tabs on it. Visiting outside these hours is not possible – the site is a nationally protected area and police man the site 24 hours a day. Don’t sneak in like an eejit – respect the entrance fee and visit during day time. 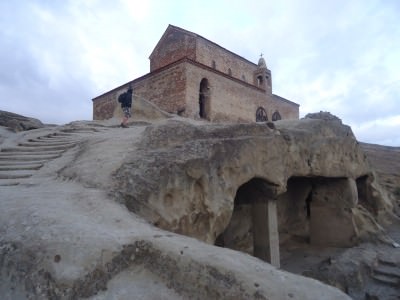 What are the main sights to see in Uplistsikhe?

It’s quite a small cave town to navigate your way round and you won’t need all day here! Guided tours are available but I wouldn’t suggest that – do your own thing. 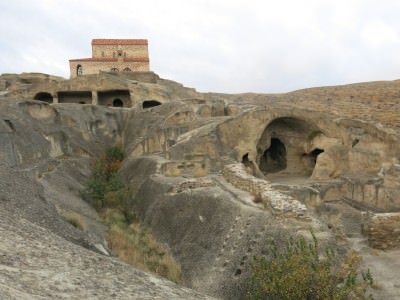 This marvellous cave town in the Georgian countryside.

While Visiting Uplistsikhe I’d recommend:
– walking up the tunnel (used as an escape route)
– main tower gate (at the front)
– a mini ampitheatre (just some ruins of what might have been)
– the Queen of Tamar Hall
– lower caves
– Uplistsulis Eklesia (yes – the main sight – a massive church at the top) 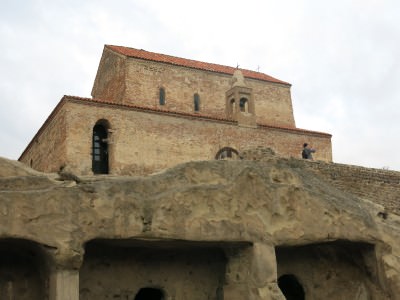 The church at the top of Uplistsikhe Cave Town.

Check out the views of the countryside too – they are simply tremendous! 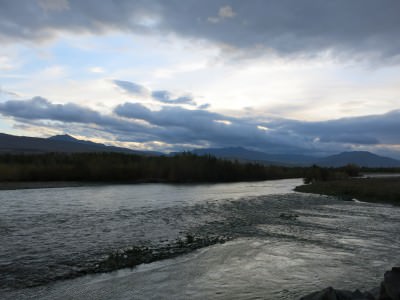 Great views of rural Georgian countryside from Uplistsikhe are a bonus!

I’ll try and add my videos at some point!