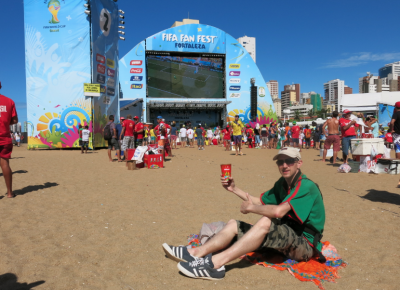 Enjoying the Fan Fest in Fortaleza, Brazil this week.

Since the 2006 FIFA World Cup in Germany, fan parks have provided another fantastic element to the world’s most popular sporting event. While Rio’s Copacabana Beach has probably been this World Cup’s number-one fan park, visitors to Minas Gerais capital, Belo Horizonte, are able to attend the first ever indoor Fan Fest. However, life took me back to the city of Fortaleza and despite having watched some of the World Cup in Macapa, Rio, London and Hong Kong, so far I’ve spent more time in Fortaleza and in particular at the crazy Fan Fest! This will be a short mini report today, my main World Cup stories will follow after the madness is over. 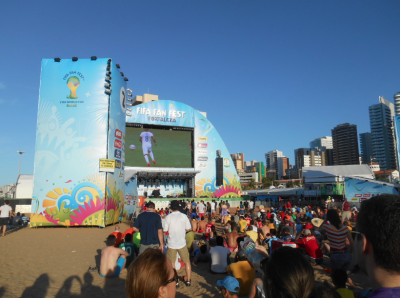 With big screens, pre and post-game entertainment and food and drink stalls, the Fan Fests have helped add even more atmosphere and excitement to the World Cup for betting fans and non-betting fans alike. Plus as a budget backpacker, it is FREE entry and beers cost from 3 Reals upwards (That’s $1.5 US) – not bad at all! 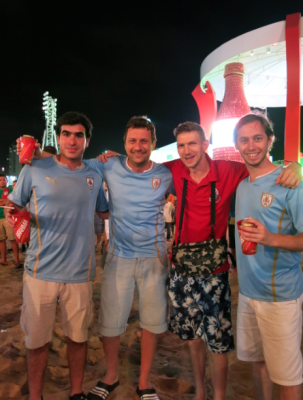 Drinking with the Uruguayans in Fortaleza. Brazil.

Think of these hugely popular gatherings and the images immediately conjured are of fun, fans – invariably, lots of both – and instantly recognisable open-air settings. Whether on the beaches of Rio de Janeiro or Durban, or in the shadow of Berlin’s Brandenburg Gate or Cape Town’s Table Mountain, Fan Fests are always a sight to behold, a maze of colour and you can meet fans of so many different World Cup teams, as we have done. 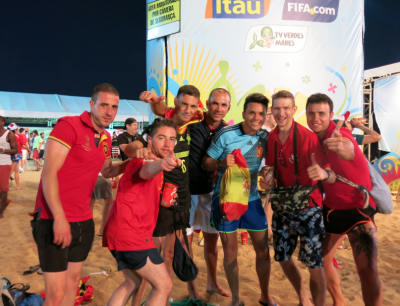 Drinking with the Spaniards just after they lost 2-0 to Chile and went out.

New rules this year are taking place all over Brazil, with the goalline technology, less drinking restrictions and the cool new elegant tripod turnstiles all adding new innovation to this year’s World Cup. 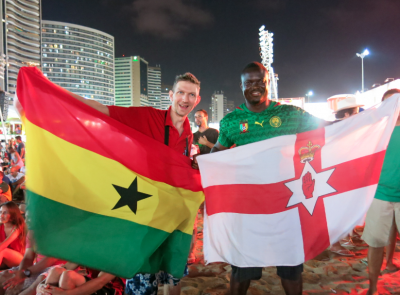 Flying the Ghana flag with Patrick while watching Cameroon v. Croatia at the Fan Fest.

In Belo Horizonte, though, they are doing things a little differently. Located inside the Expominas Centre, this venue is more accustomed to hosting music concerts than thousands of screaming football fans. While local bands and musicians were performing ahead of Brazil’s opening match of this World Cup, the 21,000 fans packed inside the arena were more interested in watching their team squeeze out a thrilling 3-1 win against Croatia to open the tournament. I’ll be in Belo Horizonte later on as well as Macapa, Iguazu, Rio and Sao Paulo on what is my third visit to Brazil. 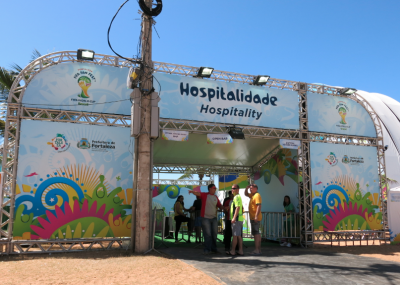 Entrance to the hospitality section in Fortaleza’s fan fest.

The number of exciting World Cup games in Brazil that we have watched so far is just crazy. Life has moved fast though and I’ve even missed a few of the games, the way things happen. We have still watched a load of matches at the Fan Fest, soaking up the atmosphere and talking to football fans from over 30 countries. We’ve met up with fans of Croatia, Uruguay, Cameroon, Spain, Holland, Australia etc. all in the last week. 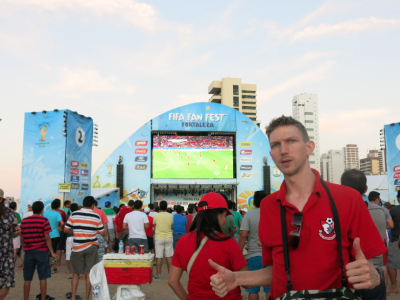 At the Fan Fest in Fortaleza.

On a final note, the World Cup atmosphere in Brazil is totally crazy and this is the biggest party of my life so far, for that reason I will be watching more games and not online as much.

This could be the longest break for Don’t Stop Living in the last 4-5 years in fact. I’m in Macapa right now, heading to cross the Equator by foot again and then onwards into French Guyana. As usual you can stay up to date on my Facebook page. Safe travels!