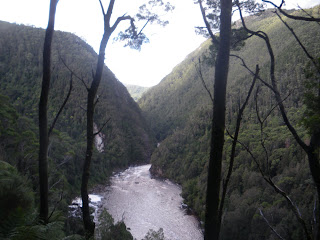 So from our peak at Rinadeena, it was time to head downhill from the mines and into an area, barely a village named Dubbil Barril, note the strange spelling as opposed to Double Barrel. 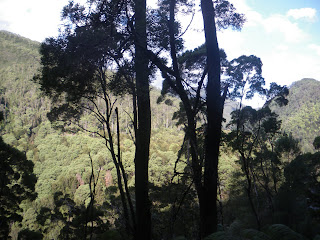 The rainforest route on the way down was totally amazing, we past gorges. 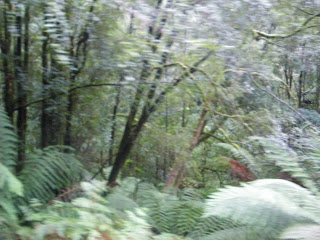 We must have gone over at least 10 bridges. Amy tells us that 6% of the line is bridges, quite amazing the amount of work which went itno that. 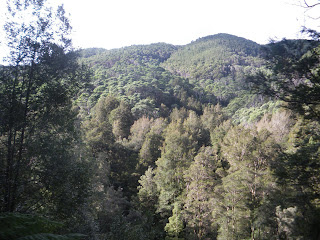 You could see the King River at various points out either side. There were many old trees there in the rainforest, I’m no expert but we were told they were North Avagas and Leatherwood. 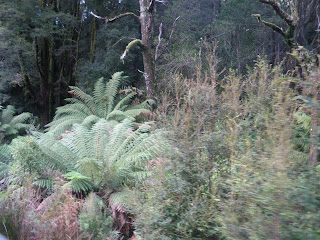 The Leatherwood trees are famous for honey, yet their leaves are tiny. 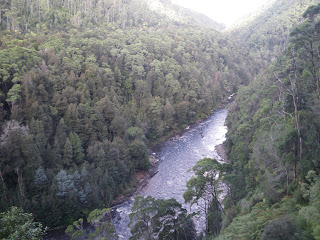 The best view on the entire trip was in this section between Rinadeena and Dubbil Barril, and that was over the King Gorge. Luckily I had a window seat on the right side, so got some pretty good views, and therefore decent photos. 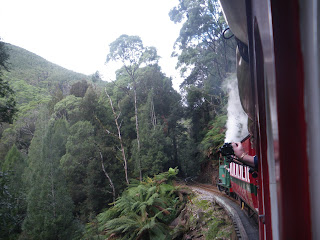 I also took a nice photo out the window of the train of us turning a corner. 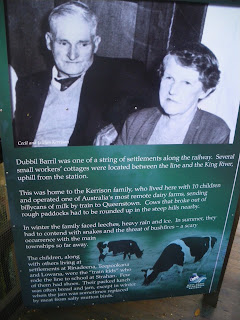 We learnt that the next stop, Dubbil Barril was the home of an unlikely Milk Dairy…
Owned by local couple Cecil and Lillian Kerrison (pitchered left), the milk dairy had several cows grazing and their kids would milk them day and night in between getting the old wilderness train to school and back. The Milk Dairy no longer remains and it’s hard to imagine it ever did… 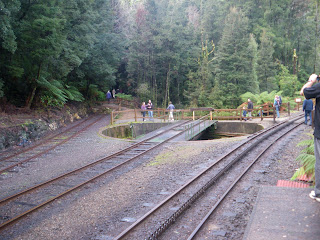 This area involved some revolutionary mining ideas from Bowes Kelly, including burning pyrite to aid the mining. This was very cost effective in the rainforest wilderness, however was damaging to the landscape. By burning sulphur, it caused air pollution, acid rain and coloured the water. So we learn the water is orangey brown in colour partly because of this. 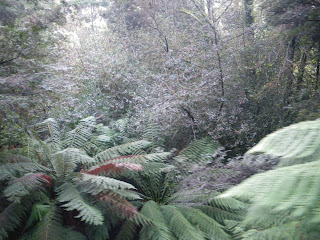 Past the bridge over the King River Gorge, we see the world’s largest Hollybush Tree. Again how they know these things is beyond me and totally questionable. Thats a photo of it, left. 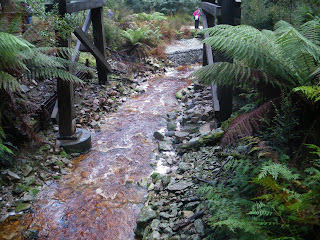 Amy our guide also tells us that there is still a yearly pilgrimage on Australia day, which is known as Mount Lyall Picnic Day. This is where loads of locals get the train to Mount Lyall, have some food and drink and a party atmosphers, before boarding the last train back. Apparently they like to drink alcohol, and therefore the last train is, and always has been known as “THE DRINKER’S SPECIAL” 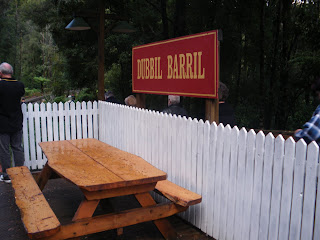 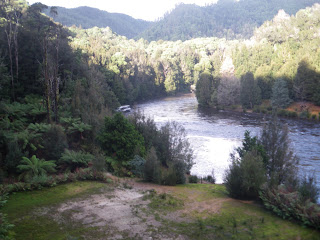 Once off the train at Dubbil Barril, we notice the thickness of the rainforest has gone, and there is open air. 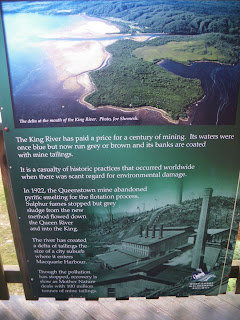 There is a museum basically at the station, all along the platform, which doubles as a rest shelter we can read information about the Cow Dairy here. 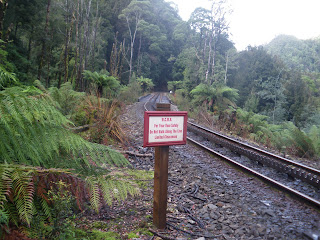 The guy sitting next to me has a cow farm in Orange in New South Wales and couldn’t believe they could have had a Milk Dairy in such a remote isolated spot. But fair play till them. 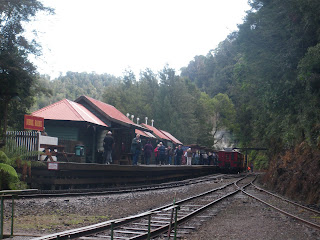 I read quite a lot of the information, a few photos of the Kerrisons remained, and once there was no need for the Milk Dairy, it got moved down the line to a spot which I’ll mention again, Lowanna. I crossed the track and took that nice photo of my fellow passengers on the platform at Dubbil Barril. Possibly the best photo I took on the journey. 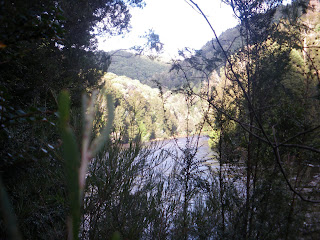 At Dubbil Barril, most of us did the 15 minute loop walk, which takes us through a forest path and down to the King River. Nice views and scenery. 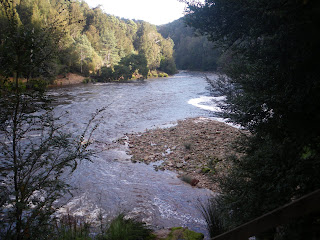 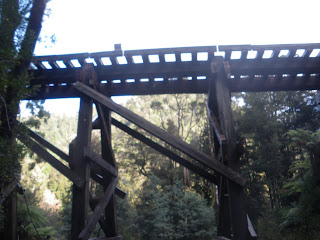 I also photographed one of the large bridges over which the railway had to be built. Fairly impressive Id say. 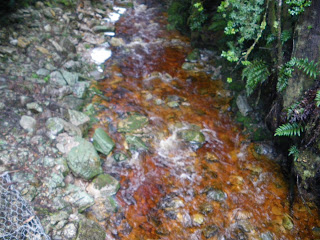 And you could also see how brown and orange the murky water was. 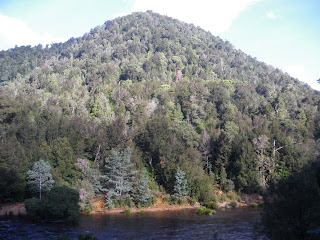 It was a short stop though and we were soon back on board and onwards to Campspur, the next location, but not a train station or stop any longer…
Travelled From – Rinadeena (The peak, and highest train station) to Dubbil Barril (the lower location of a former Cow Dairy)
Transport Used – John Lyell No. 3 Locomotive Steam Train
Distance Travelled – 7 kilometres
Highlights – Crossing King River Gorge, Downward descent through rainforest, Museum at Dubbil Barril, 15 minute walk at Dubbil Barril, Trees on route
Nationalities Met – Australian
Time Period – 1.13 pm – 2.12 pm
Key Song –
ROBBIE WILLIAMS – LIFE THRU A LENS (containing the line just because I ain’t “DUBBIL BARRILed”…):
CROSSING KING RIVER GORGE:
FOREST WALK AT DUBBIL BARRIL:
DUBBIL BARRIL STATION:
Join 15,017 Monthly Readers! If you enjoyed this article and LOVE travel and SAVING money, get e-mail updates from Don’t Stop Living – a lifestyle of travel! (It’s Free) 😉 Jonny