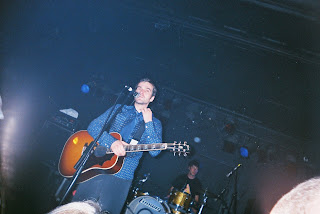 One of the calm survivors of the “britpop era” happens to be the Bluetones. They are still going, having had their biggest hits in the 1995 – 1998 era, when British Guitar music and young bands were at the core of music popularity. Now the kids wouldn’t even have heard of Mark Morriss, or even know that he had a brother called Adam, let alone know that he fronts a band called The Bluetones. I owned their first 3 albums (Expecting To Fly, Return To The Last Chance Saloon & Science And Nature) and managed to see them live in the Limelight in Belfast, Northern Ireland back in December 2000. That was a great gig. raw live music, clear microphones and speakers and those big big hits that I used to know and love. Where were you when these songs hit the charts?:
– Bluetonic (“There’s no heart you can’t melt with a certain little smile”)
– Slight Return (“Where did you go when things went wrong for you?”)
– Marblehead Johnson (“Tonight I’m wound tighter than a watch spring”)
– Solomon Bites The Worm (“Pack up your troubles, take all you can carry”)
– If (“When you try to make a difference…”) 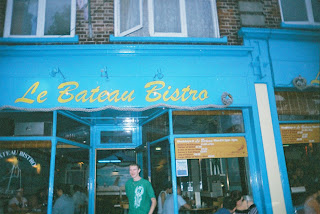 I remember them all first time round, bought the singles, bought the albums and got into them. The band are from Hounslow on the edge of London. It was announced during early summer 2005 that they were touring again. I also bought their previous album, Luxembourg, but had assumed somehow they’d split up or were simply no longer releasing records. How wrong I was, and how surprised I was that they were due to play the very very tiny and low key “Mr. Kyps” in Poole. I expected them to play in a much bigger arena than that to a bigger audience. But even in 2005, there were still tickets available and it only held around 500 I think. At the time I was working down on Bournemouth Seafront mainly at Best Break and Ben Paulley from work had said he was going with two mates (rather band members and mates, James and Andy from The Waves). I spread the word around work, and even asked my good friends Jody, Clare and Neil. None of themmuns were free, but fellow supervisor from work, Tom said he would go. I got the tickets ordered over the phone to be posted out, but then realised I had moved house and the old house had no letterbox as the estate agents locked the front porch doors. It was 2 days before the concert and I had to get the estate agents to give me a lift with the key to my old house to collect the tickets. Luckily it hadn’t rained and they were left in an envelope just beside the porch door. Me and Tom both finished work at 4 pm that day and planned a pub crawl at Parkstone of all places, the location in nearby Poole where the gig was. After work I walked home to Cranborne House and then to the main train station, where I didn’t bother paying for a ticket to go 2 stops to Parkstone. Once out at Parkstone, I met Tom there and we decided to do a very quick pub tour of Parkstone before the gig. First stop was The Cow. I had a nice bitter pint in the Dorset sun. Then we headed across the park to Le Bateau, which is really a Bistro. We decided to pint it though and enjoyed another beer in there. Just before the gig, we decided to have another beer just on the wee street beside the venue. All these pubs were within 5 minute walk of each other, the venue and the train station. This pub was The Bermuda Triangle. After that it was across into Mr. Kyps to watch The Bluetones, supporter by Mohair. 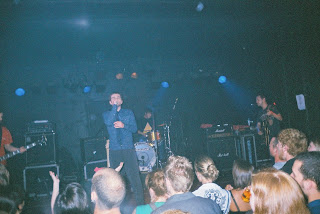 It was my first time in the venue, and immediately I liked it. Loud, atmospheric and clear was what I was thinking as the support act Mohair played. Tom liked the support act, I didn’t, I was hotly anticipating The Bluetones. They came out, dressed well like English gentlemen and they launched into many an old classic, including my personal favourite “Castlerock” (the song being not even remotely related to the seaside town of the same name in northern Northern Ireland) which was delivered at a slow cautious pace, allowing me to sing out the lines “heaven feels so close; it doesn’t feel so great” and “i think i might be losing my way” and “yesterday has gone but time is on my side.” The night did become a bit of a haze as I drank a few more pints, the bar was so close to the stage, and with the venue not full, I could work my way back to the front very easily, with my pint. I love music venues like that! I met the lovely Sarah “Hong Kong” at this gig, and went out with her a few weeks later, sadly never to see her again. That night Mark Morriss announced the Bluetones had new material being released, and they promoted it by playing a song from the upcoming “Serenity Now” EP, as well as next single “My Neighbours House”. Excellent B-sides were thrown in as well, “Don’t Stand Me Down” and “I Was A Teenage Jesus” made the set very eclectic. Even nicer with the several changes of instrumental, from the melancholy mandolin strumming of “Keep The Home Fires Burning”, the Bluetones gave us the welcome Britpop blast for the night, with the place and me going wild for them two hits we’ll always remember:
Slight Return and of course eponymous hit song which made them famous – BLUETONIC! 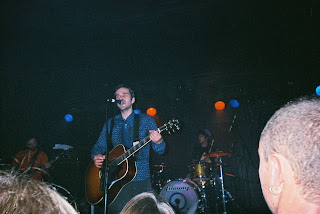 Soon the gig was over and we had faded into the night catching the last bus home. The Bluetones had rocked Mr Kyps and given it their all. It was pleasing to hear them 10 years after their prime, knowing they hadn’t lost that youthful yest.