Working Wednesdays: 5,000 You Tube Videos of my travels!

Recently I created my 5,000th You Tube Video from my travels. I have now amassed 5,000 You Tube Videos and rising. Jonny Blair on YouTube. Now don’t jump off you seat and say something like “why don’t I release a DVD?” as that’s not the point. The 5,000 odd travel videos that I have now put on my YouTube Channel are not meant to be professional, or even to be viewed or even to be commended in any way. This is just my ongoing video diary of my journeys. 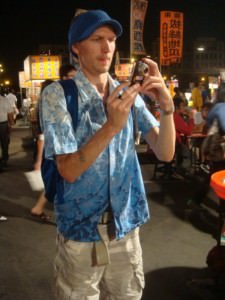 When I first started travelling I owned a camcorder (a big bulky one) and I loved making videos of my travels. If you had told me back in the 1990s that in 20 years, I could film the same quality (or better) with my small portable digital camera, I wouldn’t have believed you. I didn’t start making travel videos until 2007 on my first major round the world trip, and even then they were few and far between. It was in 2009 when I was in Taiwan that I started making a lot more videos as I now had the SD cards and memory cards to fit more on there. The videos are exactly what I said – personal random travel moments made my me as I jaunt around the globe. Some of them are just little snippets of life on the road and all of them are taken by me. 5,000 is a pretty big number, eh?

Yes it is and I’m quite proud of it and I love my videos and the fact that I have a visual video diary memory of everywhere I’ve been. None of these videos take away from the moment as I’m always caught in the moment anyway. Rather than rant on, here’s my personal favourite 10 videos out of the 5,000 that are on there!

1. September 2009: Hat Trick of Crescents! Working on the England to France ferry:

2. October 2009: Backpacking in Taiwan with my best mate Neil on a weekend where we didn’t get any sleep for 2-3 days on night buses and in bars in Kaohsiung and Kenting.

4. May 2010: Working on the back of the world’s first Broccoli Harvester in Poatina, Tasmania, Australia:

5. November 2010: On board the MS Expedition on route to Antarctica, EXCITED:

8. December 2010: Middle of the World/Centre of the Universe! Crossing the Equator on Foot in Ciudad Mitad Del Mundo in Ecuador:

Here’s to the next 5,000 videos. Believe me, it won’t take another 6 years for them to come around and whether my readers like them or loathe them, I’m going to keep making them and posting them. It’s a perpetual memory of my time on this planet.

It’s a truly cherished existence. Is this really worthy of featuring on Working Wednesdays? Yes – it is – think of the hours I’ve put into making videos, naming videos, posting videos etc. Remember it’s my blog and I’ll do as I please.

Hang around for the ride my friends. The rollercoaster has bound me fast!

2 thoughts on “Working Wednesdays: 5,000 You Tube Videos From My Travels”