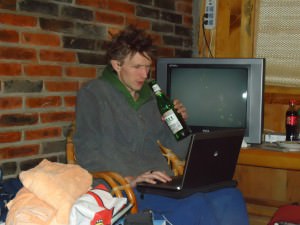 Working Wednesdays: How to start a travel blog – relaxing with a beer in the mountains of China!

It’s time for a very reflective post on Don’t Stop Living, as I reflect on how, why, when and where I started my travel blog and why it’s a great idea for you to start one too! I’ll be giving a few tips on how to start a travel blog too, and there will be more posts to come on my life as a travel blogger! If you really travel the world and you take lots of photos and remember things about where you go, then what are you waiting for – start a travel blog!! 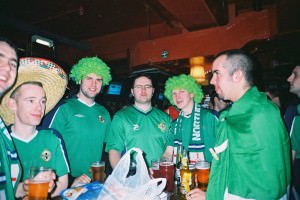 Originally my travel blog was just going to be about travelling round Europe watching Northern Ireland matches!

The short answer is Monday 27th August 2007. However I had the idea for a travel blog in 2005, but it was just going to be about my travels around Europe supporting Northern Ireland at football matches. My blog didn’t see the light of day until August 2007 during a world tour in between jobs. Below is a link to my first ever Blog Post, on my first ever blog, which was originally on the Blogger Platform, it really makes me cringe now and I have since updated the title and content of it on the updated platform here, but this one is exactly as it was back in 2007…:

Another of my attempts at Don’t Stop Living – I went through about 12 themes before choosing the right one!!

Why did Don’t Stop Living start?

I did a mini world tour in 2007 and visited over 20 countries in one year for the first time. I had a bucketload of stories from that trip alone, never mind my archives of travelling round parts of Europe before that. I wanted a platform to write about where I had been, what I had done and who I had met. I did it for myself, my friends and my family. 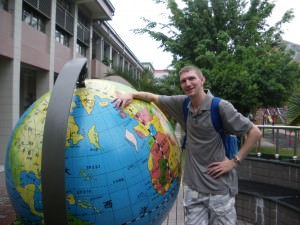 What gave me the final push to start Don’t Stop Living?

To be honest it was THREE fellow travel bloggers who I met in Canada and USA who told me about their blogs, so I then set one up a month later. Ironically none of them have updated their travel blogs in years though!! On that 2007 World Tour, I met Lee Price and Mike Burkimsher (both from England) and Cassiano (from Brazil). All three of them had decent travel blogs, back in July 2007. On the same trip I also met a New York author with a travel blog and another Essex Girl in New Zealand. After seeing the five of their blogs, I started mine, on Blogger. These four blogs are still live:

So those four travel bloggers got me started, yet none of them have even updated their blogs since 2008!! (Unless of course, like me they have relaunched under a separate domain, but I don’t think they have). Hats off to Lee, Mike, Cassiano and Stacie for helping get my travel blog started!

Choosing a name for your travel blog

Go with what you believe in. For me my motto is Don’t Stop Living so nothing else was considered. I also have a site called Travelling Northern Irishman, but that’s too long, stick to a short and quirky travel blog title.

The name Don’t Stop Living come from my first trip to Toronto, Canada in 2001. I was walking round near a university in the city on my own, when I saw “Don’t Stop Living” just grafitied on the wall. I wrote it in my travel notebook, loved the term and have used it ever since. So that goes back 12 years.

Don’t Stop Living logo – one that was never used – this is the first time it’s been online anywhere!

Where did Don’t Stop Living start?

Toronto, Canada. A city I have been to twice (2001 and 2007) but not been back since, yet it gave me these three things for my travel blog:

2. The first ever travel post (not the blog introduction), which is here:

3. That’s where I met Lee and Mike – the first two travel bloggers I had ever met 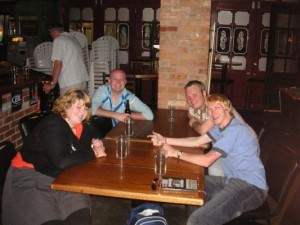 During that trip I set up my travel blog and called it “Don’t Stop Living” though I used the web address http://jonnyscottblair.blogspot.com . I started writing about my travels. I really didn’t know at the time that I would be still updating it daily, 6 years later, but I LOVE travel and I LOVE writing so it’s not that great a surprise.

How did Don’t Stop Living start?

I already kept written travel notes in a travel notebook. Transforming my words from paper to computer was an easy process. I then added photos, videos and more ideas and links to give real travel substance to my stories. I used Blogger.com to start my travel blog Don’t Stop Living. 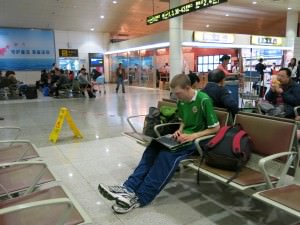 I update my travel blog all the time and I love it. It’s easy to start one up and you should think about doing it! Here I am at Shenzhen Airport.

What three things do you need to start a travel blog?
1. To have actually travelled

2. To be able to use a computer

3. To be able to write about your travels 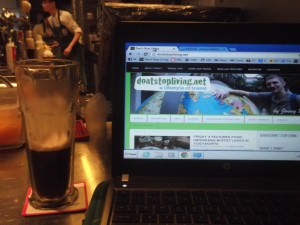 A Guinness and a laptop are my essentials for writing my travel blog!

How to start a travel blog:

Head to Blogger or WordPress and set one up. It’s that simple! That’s it. Travel blogs are FREE to set up on either Blogger, WordPress or even Wix. If you want some advice – start one up. You never know where it will lead you. My blogs now have over 1,000 posts from 7 continents, almost 70 countries and over 400 cities and towns. Don’t Stop Living is not about me, my friends or my family anymore, it’s an online resource for my fellow travellers now. I want you to go to places like Belarus, Paraguay and Luoping and see the world, then you’re already on the right site to help you on your way.

– How to Start a Travel Blog

– How to Monetise Your Travel Blog

Don’t just sit in an armchair…get a cup of tea and a laptop!

Some of my top posts since 2007 to get you inspired:

A Lifestyle of Travel

So my advice on how to start a travel blog comes down to just two words: Do it!

Don’t forget to stay connected to me in these ways as well as filling in the form and subscribing to my weekly e-mail newsletter:

4 thoughts on “Working Wednesdays: How to Start A Travel Blog”