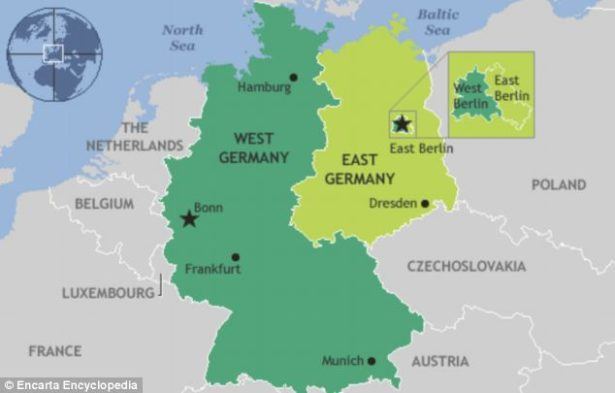 There is no tongue in cheek and definitely no apologies for one of the most blatant tourist sites / sights (delete as appropriate) ever covered on here. The fact is I should’ve written about this crossing years ago. It was March 2005 as a dreamy 24 year old that I first visited Berlin in modern day Germany (crackpack away your “east german/wall excrement” – it’s as bad as the South Koreans claiming the North!!) This article is 13 years in the making… 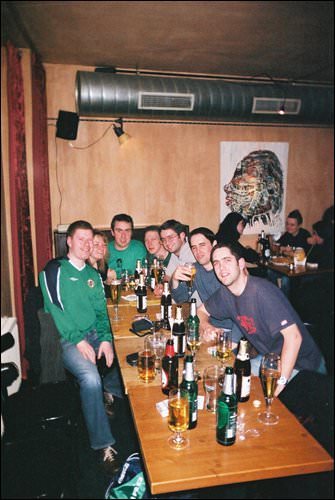 It was an eye opening trip for me and probably (read – definitely) changed my life as I covered yesterday on Northern Irishman in Poland. I border trained it with some of my best friends from Berlin in Germany to Warszawa in Poland. As I mentioned on my recent wacaday Podcast with Ric Gazarian on Counting Countries, Poland was probably my first genuine backpacking trip. It came before China, Russia, New Zealand, Taiwan etc. 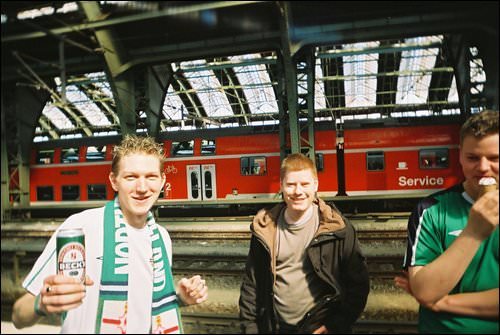 We flew from Manchester in England to Berlin in Germany. We had a few days in Berlin for some sightseeing, partying and culturistic historical reminders. I was a real novice tourist in those days. I was so naive. We toured the Jewish Museum, Checkpoint Charlie, Berlin Wall remains, Brandy BG (Brandenburg Gate) and enjoyed nights out in Oranienburger Straße. My friends and I even mocked the wall with an NI terrorist stance. Having since backpacked North Korea, Iraq, Afghanistan and Venezuela, I see my own irony in my mirror, as a 24 year old Ulsterchild. 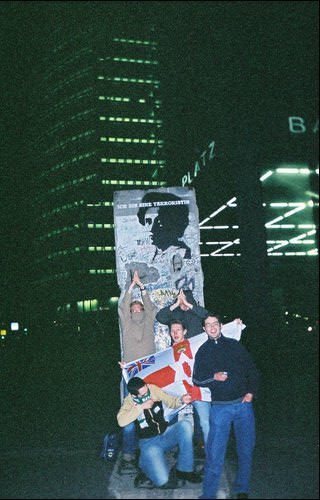 Reminders of the Berlin Wall while touring Germany in 2005. 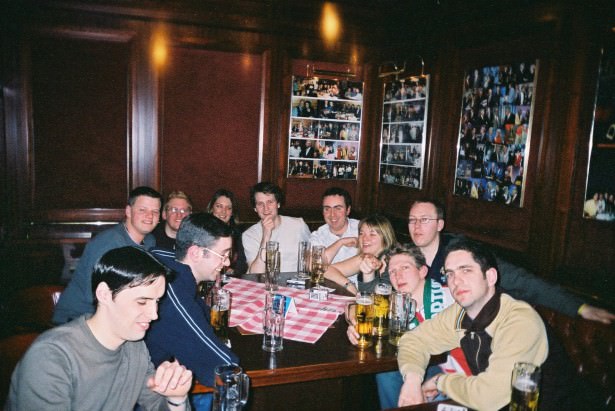 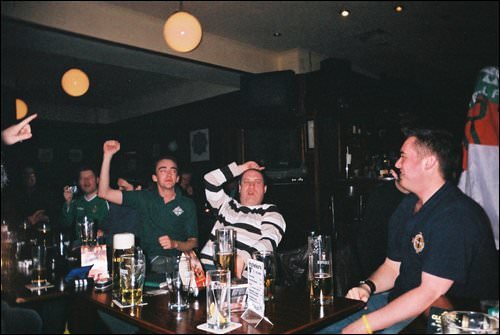 Toddy and Owen in the Oscar Wilde Irish Pub in Berlin – we got smashed in there! Green and white army!

But before we went to Poland, we crossed the Old West Germany to East Germany border which is of course marked forever with the Berlin Wall. I have visited Berlin 4 times since (2006, 2007, 2017, 2018) before my recent adventure back to Berlin. I hadn’t been to Checky C since the 2007 trip. It felt like a good time to return to Checky C, Checkpoint Charlie after all these years. After all, think how many world borders I genuinely backpacked in the intervening years. A vast number. 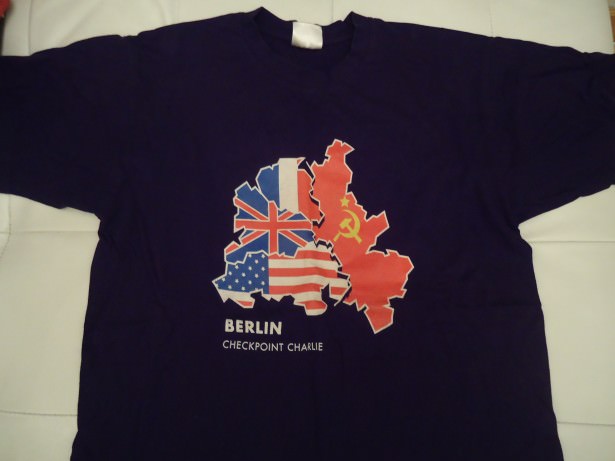 The Sad Part: The Contrast from 2005 to 2018
I was sad here. Where once a normal non descript building sat, now sits a KFC. Yuk. I hate it. I really despise this type of global commercial capitalist bull excrement. Even worse, a yellow arch of a DickMonalds and a green circle of a Ratsbucks are here. Exactly next to this history of Checkpoint Charlie. It astounds and disgusts me. I remember Michael and I chatting about it back in 2005. Now oh chat would be ruined by fellow tourists munching a big Mac and sipping a fakeaday Crappuccino. Not cool Germany. Not cool at all. Get rid of these ugly American businesses. I’d be quite happy to see only German cafes, bars and shops here. 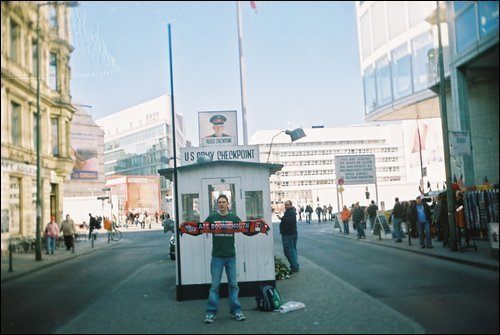 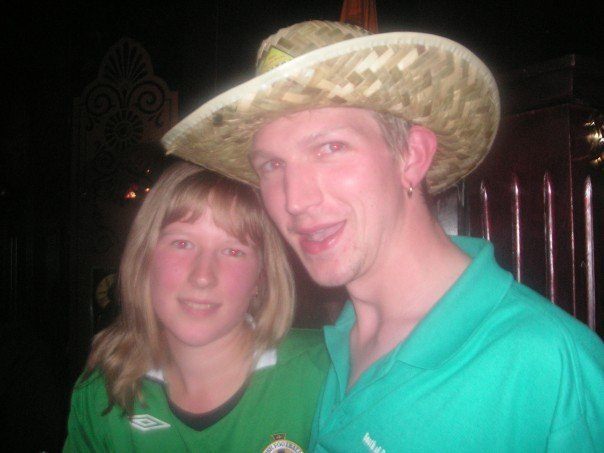 One time German love of mine, drinking by Checki C in 2007… 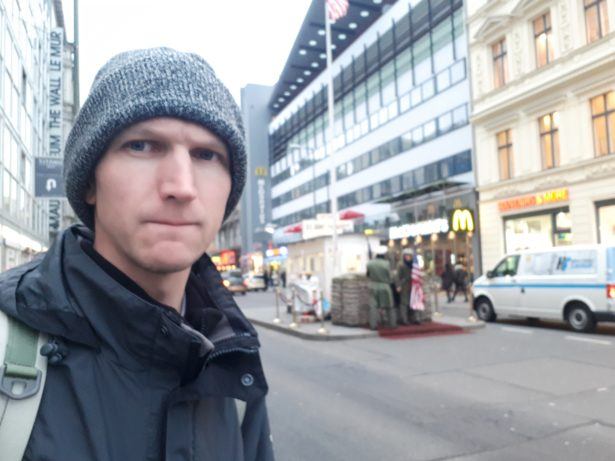 So despite the gruesome DickMonalds and Ratsbucks (commercialism made its way here), there is good news. There is now a huge Mauermuseum (Wall Museum) in the same building where buck eejit Koreans munch a zinger tower in front of German coffee idiots who still slag off Poland as if they have no education.

“Damn my education; I can’t find the words to say” – Noel Gallagher. 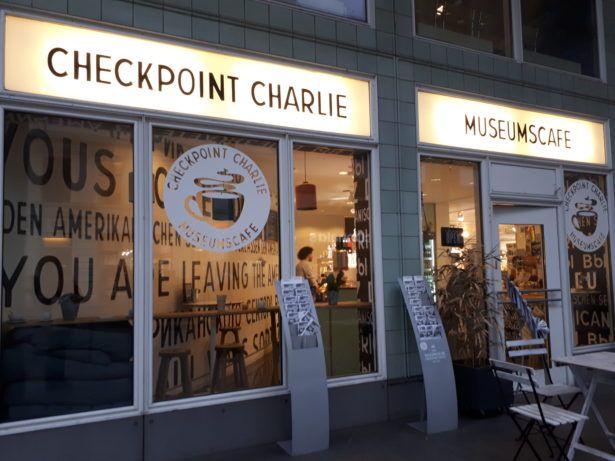 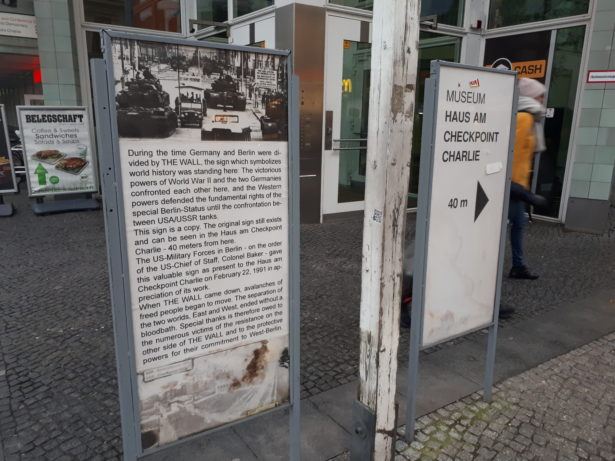 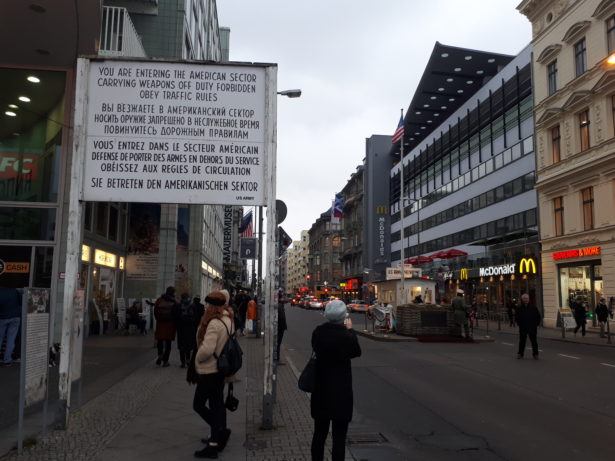 Getting Your Passport Stamped at the Former East Germany to West Germany Border
There is good and bad news but to be honest as a travel and tourist freak, I loved this part. In 2005 I don’t remember any border guards placed here or even the chance to get your passport stamped. But now in 2018 you can!! I am a member of a Facebook group with fellow tourists who love getting new visas and stamps. It is called Every Passport Stamp and worth joining if you to backpack a new border and whip out your passport for inking. 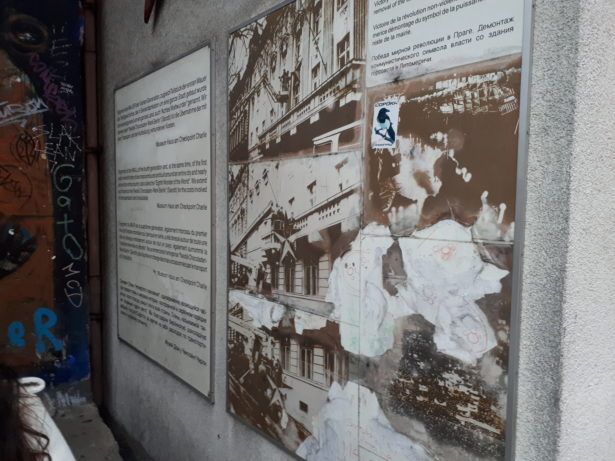 So yes I backpacked across the Former East Germany to West Germany Border and then got my passport stamped. The bad news for cheap tourists is that it costs 5 Euros. For me I wanted it. Yes it’s not a real border I know but I love it. I didn’t get the chance to cross the actual border back in the days where there was a huge wall preventing such backpackigation. So I approached the guard from the east side. I left East Germany, stepped over the wall ( which is forever remembered on the ground with its exact former location marked out) and arrived in West Germany. It was another border backpacked or me. I paid my 5Euros, got my passport stamped. I even got a selfie brace with the border guard and suddenly I was in West Germany. I highly recommend backpacking this border. Deutsch Marks are used on both sides of the border and the language is German. 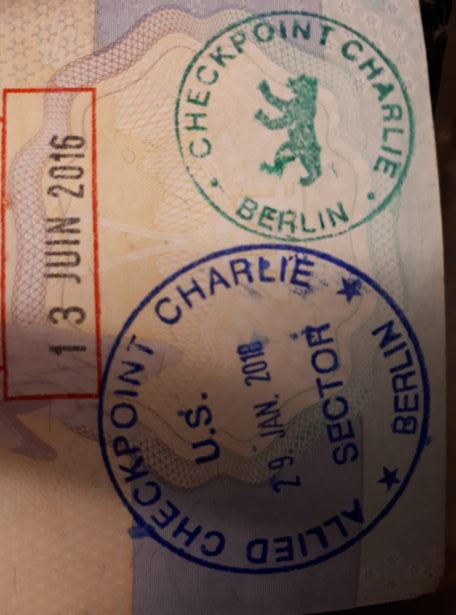 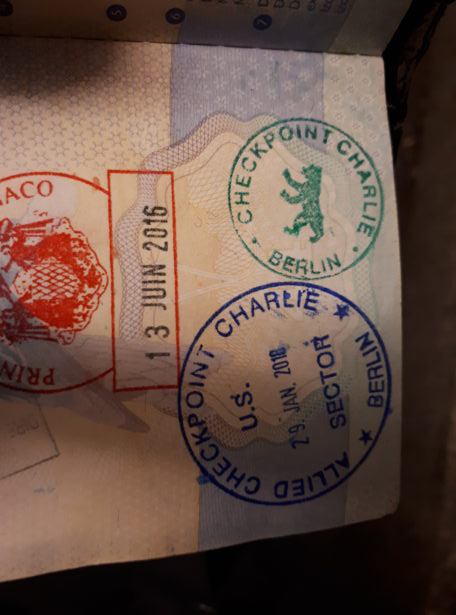 To get here by metro use either Stadtmitte or Kochstraße on the U2 Metro line. Now for the history brief… 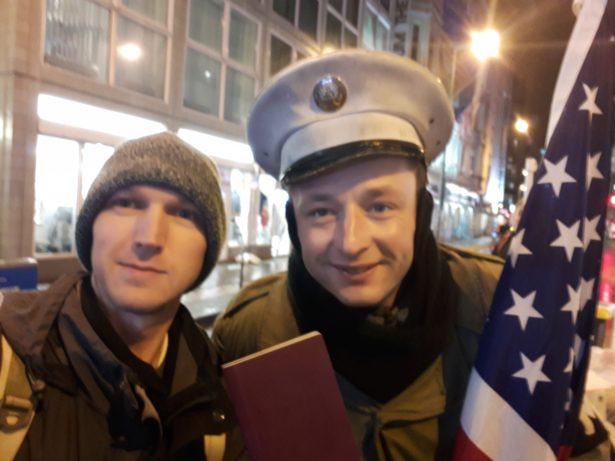 Checkpoint Charlie was the most well known border crossing between East and West. In October 1961 American and Soviet tanks engaged in a face off following the USA’s intervention to defend the fundamental civil rights of Berlin’s occupying powers. 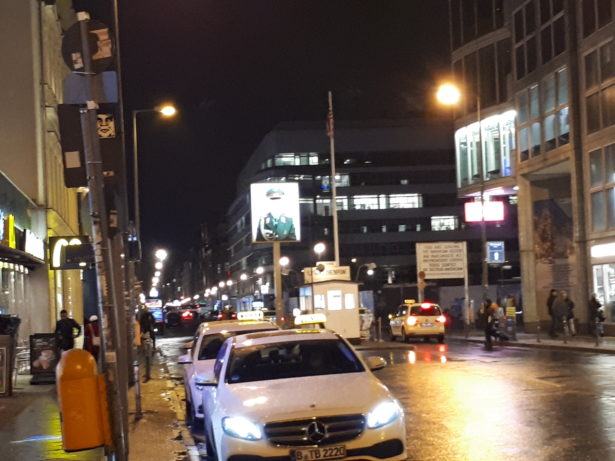 Once the Berlin Wall and Checkpoint Charlie were in place, life would never be the same again. There were many attempted escapes from East to West. Unsurprisingly not many people really wanted to escape from West to East! These escapes were sometimes successful. Tales of lucky crossings in cars that were not fully checked or when guards were off guard ( it was well manned so very rare). An Isetta sits inside the Checkpoint Charlie Museum – this was the car used for escape purposes. 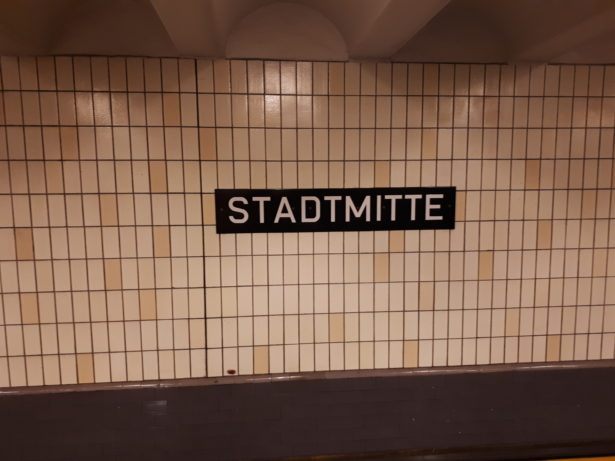 Many East Berliners were killed. An East German called Peter Fechter bled to death at Checkpoint Charlie in 17th August 1962. For simply wanting to escape. Global politicians tried to intervene. Ronald Reagan, former US President once yelled to Soviet leader Mikael Gorbachev “tear down this wall” . As a 9 year old Northern Irish child, I hadn’t a clue. You know, Norman Whiteside was my king… 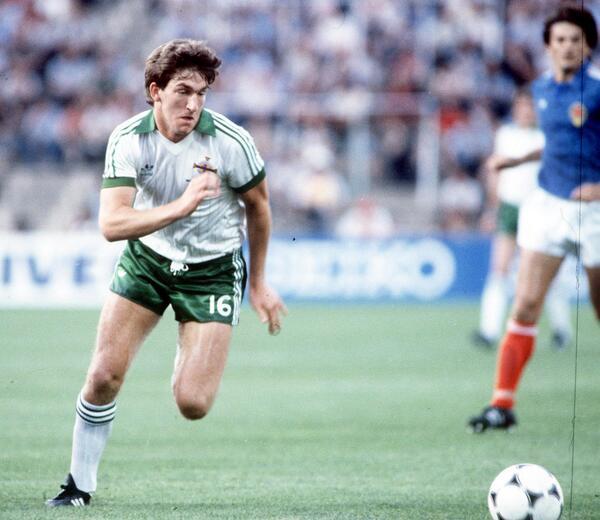 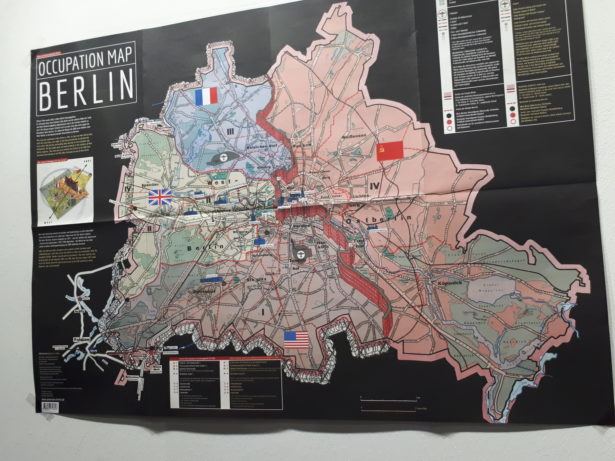 The Berlin Wall Times
During the Berlin Wall Times there were many riots, protests, escapes, deaths and pivotal moments. East Germans ( Germans) trying to escape to West Germany (Germany) were killed or imprisoned. It seems ridiculous. Both countries were German. Yet you couldn’t go between the two countries. Iron curtain indeed.

On the 9th November 1989 it came down. That’s 38 years it was up for. Older than my lifetime. It seems unfathomable. A life that city will never get back. 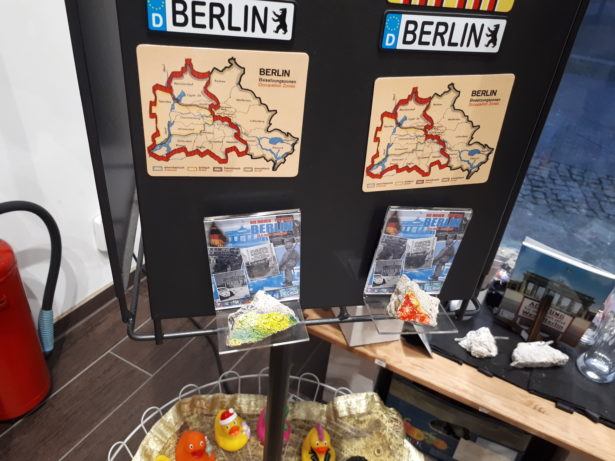 The End of Checkpoint Charlie
I am glad that Checkpoint Charlie is still there. I think it’s important to remember the history. It’s an icon of Berlin. In fact these days I find Berlin boring, dirty and uninspiring. It is only monuments like Checky C that help me appreciate the city.

While the Berlin Wall began its crumble in 1989, Checkpoint Charlie was still formally used until 1990. It was all a bit odd if you are a football fan. You see West Germany had qualified for the 1990 World Cup and East Germany hadn’t. So the actual border point at Checkpoint Charlie officially was demolished on 22nd June 1990. At the same time, West Germany were on route to the World Cup Quarter Finals. Their team was made up of only West Germans. They went on to win the tournament and it would be the last time we know of the football team West Germany.

On my first visit to Checky C I bought a t-shirt and one I still wear to this day. I really like that t-shirt. The t-shirt shows the four countries / entities who controlled Berlin and therefore Checkpoint Charlie. The United Kingdom, the United States and France on the West. The Soviet Union on the East. Then there is the famous statement in four languages:
You are leaving the American Sector
Vous Sortez du Secteur Americain
Sue Verlassen Den Amerikanischen Sektor

Total Fatalities Resulting from the East Germany DDR Border Regime
(1948 – 1989 and includes the Germamy (East Germany) to Germany (West Germany) border, via the Baltic Sea and other Eastern Block States such as Poland, Lithuania and Slovakia) 1,684. That’s around 40 Per year, one every 9 days)

Inventive Escapes
If you thought my whackpacking adventures through unrecognised republics were inventive and obscure, delve into East German escape tactics. The Berlin Wall guards were stringent. It was so strict, so well manned, so armed. Yet over 5000 from the east side managed to escape. How did they do It? In any way they could. The Musuem’s exhibition shows not only some of the methods but includes devices and physical methods used. These include:

– Hiding inside an amp or loudspeaker
– in the undercarriage of a modified car
– via mini submarine under the Baltic Sea
– via hot air balloon
– motor powered hang gliders
– inside a motorbike tank ( well oil be damned!)

There was a period of huge success in October 1964 when a whoppaday 57 people managed to cross into West Germany over the course of two evenings. Now that’s what I call Jurassic Park!

Seriously I love it I buzz off it. I’m a total geek for any kind of border crossing, separate state, rebellion against absurdity and general passport stampification. Try not to fall in love. I have also visited Germany on a few other times, including on my Belgium trip when I had a brussels airport transfer. Those other trips also saw me visit Trier, Hamburg and tiny Osterweddingen.

I have a love story too. I fell in love with an East German girl in 2007. I was only in Berlin for two days. We dated at the cafe nearest to Checkpoint Charlie and we kissed under it. I did think of her on my journey. Two of my travel friends and dorm buddies from that trip were John Hart and Owen Millar. They’ll infamously remember how I took this girl all the way to the airport for my flight to Iceland and couldn’t let her go. We were still kissing as the trains doors closer before Owen dragged me out yelling “are you going to watch the (football) match or kiss the girl”. I went to the football match. Story of my life. The lady and I sneaked into the basement of our hostel and got naked together. We didn’t have sex but she was willy walking me for a while and I was sucking her when a hostel worker came in to do the laundry. That was probably my own Checkpoint Charlie.

“My soul slides away; but don’t look back in anger, I heard you say” – Noel Gallagher.