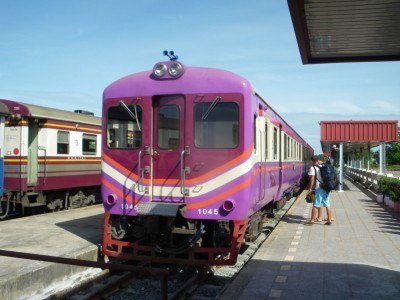 World Borders: How to get from Thailand to Laos (Nong Khai to Thanaleng)

I finally got round to visiting The People’s Democratic Republic of Laos this year, and did so by getting a train from Nong Khai in Thailand across the border. Given that I had crossed over 25 land borders on my travels before, I assumed this would be an easier one. It wasn’t quite…but anyway here’s how to get from Thailand to Laos on the Nong Khai to Thanaleng route.

First of all, I arrived by night train from Bangkok into Nong Khai at dawn. Nong Khai train station seems quite remote and not in the actual city. Tuk tuk drivers are on the alert to offer you a lift to the city. But on this ocassion I wasn’t staying in Nong Khai – I was heading across the border to Laos – where I was meeting a mate in Vientiane.

20 Baht for a train ticket from Nong Khai to Thanaleng in LAOS. Sounds too good to be true!

I had failed miserably to find any Laos Kipp in Bangkok or Hong Kong prior to my journey to Laos – so this was another time that I was heading into a country without any of their currency. I have heard that Laos Kipp is fairly difficult to access outside of Laos. If you know different, let me know.

Timetable for the Nong Khai, THAILAND to Thanaleng, LAOS train

So I bought my train ticket from Nong Khai in Thailand to take me across the border to Thanaleng Station in Laos. 20 Baht. It was July 2012. The queue for Thailand Immigration Departure was minimal and the purple train I boarded didn’t seem too full. It was a Sunday morning, though I did meet and chat to English, Israeli and Dutch travellers either on the train, before boarding or at immigration.

The purple Express train to Laos! Next stop – Thanaleng!

The train journey itself was fantastic. All a childhood travelling Northern Irishman could dream of. A slow train, a comfortable seat, window view, my exit stamp done, morning sunshine and crossing sparse fields before we arrived at Friendship Bridge. We see a Thailand flag on one side and within minutes a welcome flag and sign to the People’s Democratic Republic of Laos. Easy! And it only cost 20 Baht.

Arrival across the bridge into LAOS

Now the next bit was getting a Laos Visa. As a seasoned traveller I always carry photocopies of my passport and spare photos. If you don’t have a photo they will charge you an extra 2 dollars (or less or more depending on how friendly you get with them). How much did the Visa cost? It cost me $35 US Dollars, all inclusive. Others got charged a bit more.

The important thing to know is that you MUST pay in either US Dollars or Thai Baht! I must stress how important it is to carry US Dollars with you – they seem to come in handy almost everywhere you go.

So I filled in my forms, gave them a photo and the money (I paid in Thai Baht – but had to swap some of it over) and within minutes I had my visa. Only problem now was there was NOBODY else about. It was odd.

There had been a few travellers in front of me and behind me at the Immigration kiosk, but they had now all left. This meant I was stranded in Thanaleng, which it turns out is 20 odd kilometres from Vientiane. I wasn’t going to walk to Vientiane as it was miles away and I had no idea of the correct route, so the only option was a minibus/share taxi. As I was the only one around, the guy said the charge was 400 Baht! Now come on, that’s crazy money! I’ve just arrived in Laos – it cost me 20 Baht to get into the country by train, over 1,000 Baht for my visa and now I was alone and they wanted 400 Baht! I got into the minibus, then I got out again. It was more of a large car actually.

I sat down and point blank refused to pay them. The guy said that they can fit 8 passengers for 400 Baht meaning it’s only 50 Baht each! Not much use to me when there are no other people about. Those guys in front must have disappeared very quickly. I was going to wait for the next train in the hope that some other people would turn up and I could share with them. BUT I was meeting my mate at noon, it was now after 10 am and the next train to arrive in Thanaleng would be at 4pm, I was told.

In the dearest mini bus ride of all time from Thanaleng to Vientiane, LAOS

I bartered the guy down to 300 Baht and a free water and he wasn’t budging any lower so I had to bite the bullet and pay it. Gutted to spend so much money in my first 30 minutes in the country and it didn’t leave me with a good impression of Laos. In fact of all the countries I’ve been to, I’d put it in my bottom 5. I also had problems in Vang Vieng and leaving on the border at Nong Nok Khieng.

So in short – my tips for arriving in Laos from Thailand would be:

– try to travel with others (going alone is ridiculously more expensive)

– bring US Dollars (and lots of them)

On this occasion, Don’t Stop Living was just unlucky…

Videos from my arrival into LAOS:

1. Boarding the train at Nong Khai in Thailand:

Thanks for reading how to get from Thailand to Laos on the Nong Khai to Thanaleng route, this is an ongoing World Borders series on my travel blog.
Join 15,017 Monthly Readers! If you enjoyed this article and LOVE travel and SAVING money, get e-mail updates from Don’t Stop Living – a lifestyle of travel! (It’s Free) 😉 Jonny

2 thoughts on “World Borders: How to get from Thailand to Laos (Nong Khai to Thanaleng)”