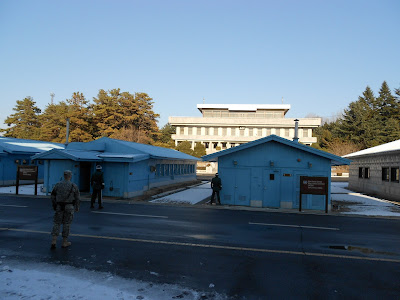 To say you have been to North Korea is one thing. To say you simply did it with ease in a blue hut accompanied by a tour group and some members of the army stationed in the JSA (Joint Security Area) at Panmunjom (or Panmunjoeom) is not quite the same as eating a bit of kimchi in the second class carriage on the 11.31 to Pyongyang. Realities aside, just one week ago, Christmas Eve 2011, Panny and I stepped foot in North Korea. Or the DPRK – Democratic People’s Republic of Korea. 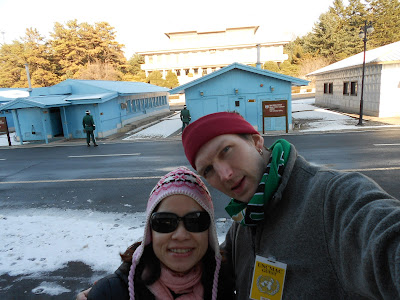 The tours are organised from South Korea as it happens and we booked ours in advance. It was the second year in a row I was embarking on a memorable trip on Christmas Eve, as I cast my mind back one year before I had been at Winaywayna on the Inca Trail to Machu Picchu in Peru. Machu Picchu is a dead, ruins of a city bereft of modernity and civilisation, but full of inspiration and awe. This frontier at Panmunjeom is quite the opposite. 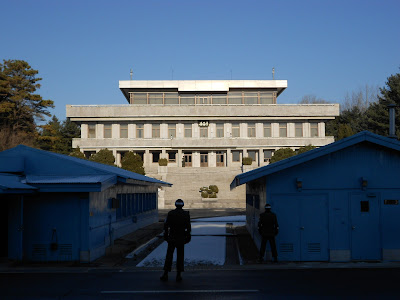 North Korea, in its unknown and internal charm, is one of the hidden gems of planet earth. We don’t know much about it. What we do know is that Kim Jong Il died recently and the country was in mourning. And they beat Italy 1-0 in the 1966 World Cup. But to say the rest of North Korea is a hidden bag is somewhat of an understatement. 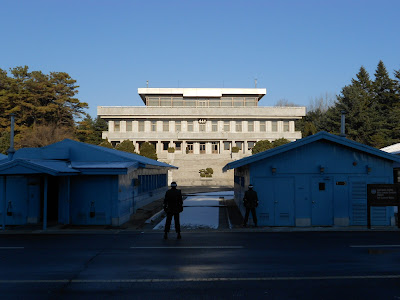 So Panny and I embarked on the DMZ (De-militarised Zone) tour on Christmas Eve. The tour starts in the South Korean capital of Seoul, taking you to many sights, museums and informative points including the visit to the border here at Panmunjeom (the photos appearing here were all taken at Panmunjeom). For me Panmunjeom was the real highlight as it was there we saw our first ever North Korean – the soldier manning the North Korean building. It was there where we actually stepped into the communist country of North Korea and it was there where we truly witnessed one of the final chilling frontiers or borders on the planet. 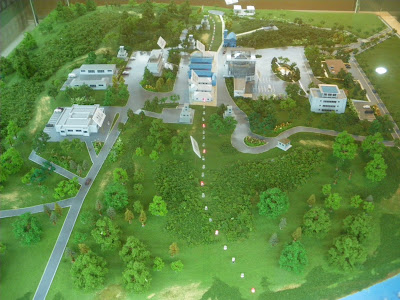 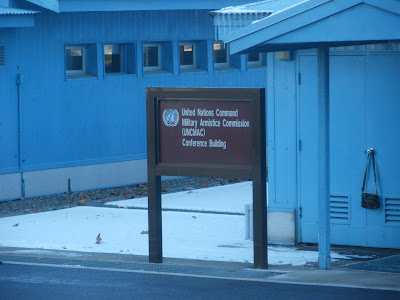 One of the blue huts is named the MAC building. Military Armistice Commission. This is where conferences and peace talks are apparently held. When we were there the hut was manned solely by South Korean guards, despite some of the hut being over the border in North Korea. 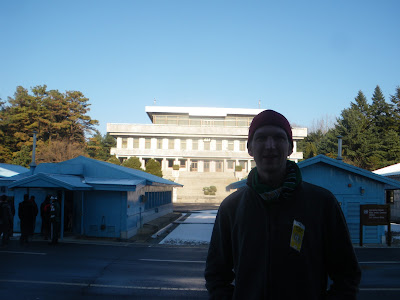 This was the last photo before we were escorted into the MAC hut! It was the big moment to cross the border into North Korea, nonchalantly in the hut. 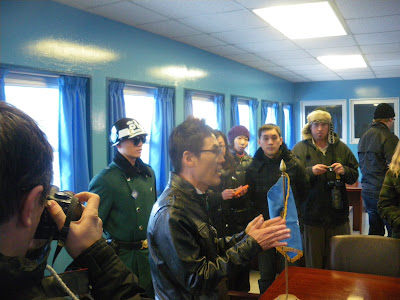 Our guide mentions to us that the border is actually the exact line where one soldier stands and the microphones (which record your every word) line the table. 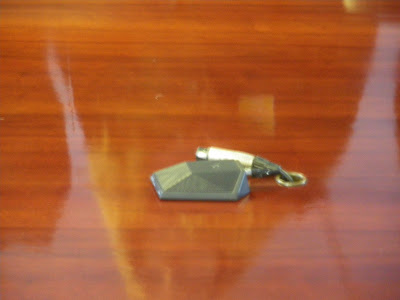 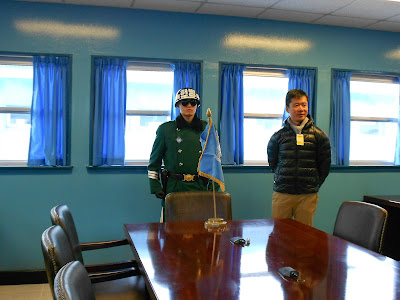 It’s all quite surreal and Panny and I step to the other side of this table which means we are now in North Korea. 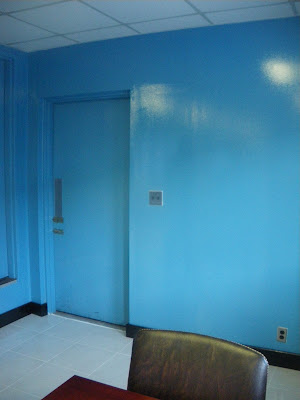 At the back of the room is a door, which once you go through it, you’re exposed to the North Koreans. The door is permanently manned. 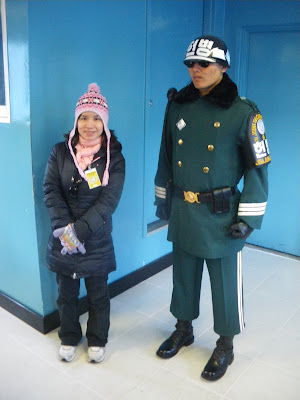 Panny standing by the security guard, in North Korea. 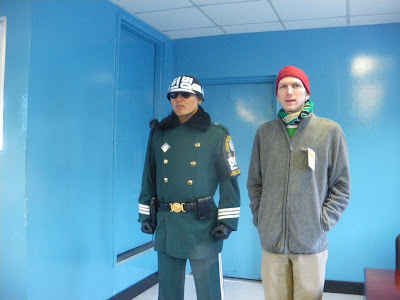 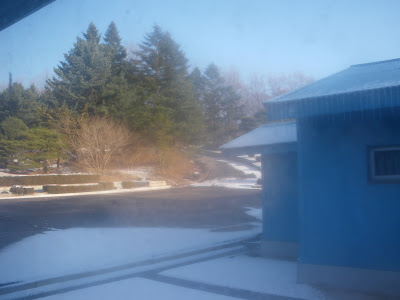 A view into North Korea from the hut. 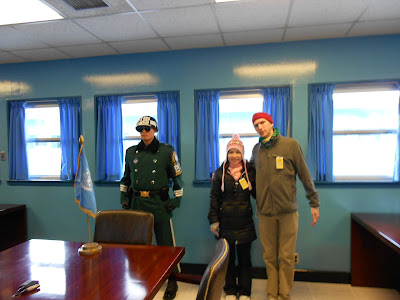 Panny and I both across the border in North Korea here. 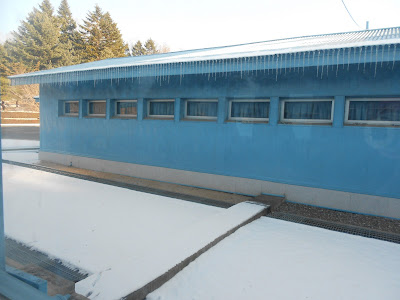 More photos and memories to come including more of North Korea from the bus and from Panmunjeom. The North Korean guards hold binoculars and stare at us. 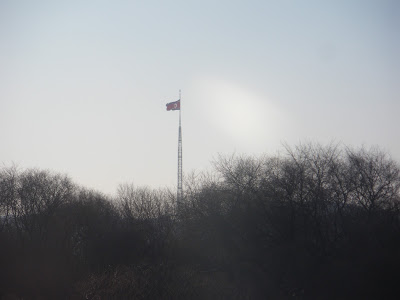 Plus we were there the week Kim Jong Il died, so this photo I took of the North Korean flag (just over the border) shows a rare glimpse of the flag at half mast. 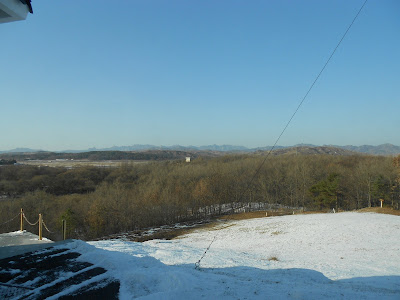 It was a moving and interesting experience, the whole day trip was just exceptional and I am even excited at the thought of putting it into writing at some point.
CROSSING THE BORDER INTO NORTH KOREA, AT PANMUNJEOM:
Join 15,017 Monthly Readers! If you enjoyed this article and LOVE travel and SAVING money, get e-mail updates from Don’t Stop Living – a lifestyle of travel! (It’s Free) 😉 Jonny