My World Travellers series continues despite the lack of actual travel these days. The latest couple in the series are Miriam Murcutt and Richard Starks. Miriam and Richard are two big travellers and writers. They are authors of Along the River that Flows Uphill from the Orinoco to the Amazon. 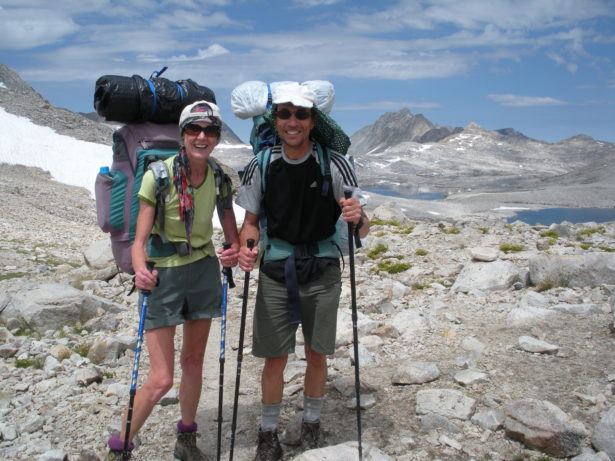 Richard and Miriam crossing the 11,995ft John Muir Pass on their hike along the John Muir Trail in the Sierra Nevada mountains, California.

We are writers and journalists who ran a small publishing company from bases in Toronto, Canada; London, England; and Boulder, Colorado.  When we sold the business, we decided to split our time between travelling and co-authoring non-fiction and fiction books, some about our travels, some not.

We were both born in England and grew up there (and in America and Scotland), but after graduating from university we emigrated to Canada. We lived there for fifteen years until our work took us back to London and then on to America. 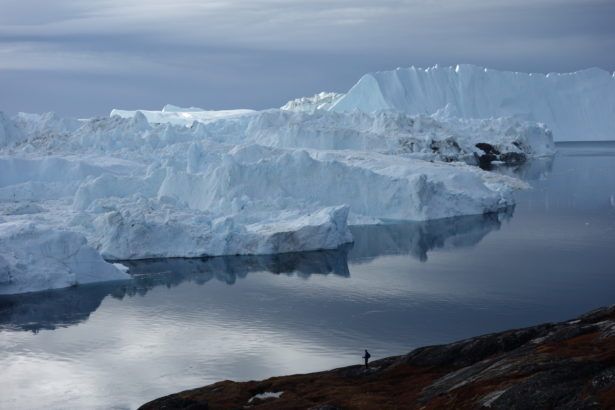 A lot of places, but still not enough.

We’ve catered to our love of mountains by hiking and climbing in the Alps, the Himalayas, the Andes, Sierra Nevada and the Rockies, where we’ve managed to climb most of Colorado’s ‘fourteeners’ (there are 53 mountains here that are higher than 14,000 feet, many more than any other US state).

We explored Patagonia, Peru, Bolivia, southern Venezuela, most of Mexico, as well as crossing all the countries in central America (except El Salvador) on foot, by bus and occasionally clinging onto the saddle of a bad-tempered horse.

We’ve spent a few weeks in Thailand, Vietnam and Cambodia – good, but a bit too humid for our liking. 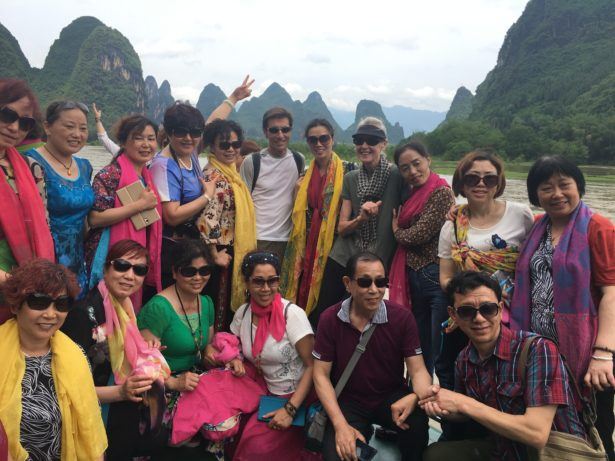 On a boat trip on the Li River in south-west China along with a group of very friendly Chinese workers who shared their picnic lunches with us.

We’ve hiked the Kumano Kodo pilgrimage route in Japan and some of the Arctic Circle Trail in Greenland. We’ve biked through parts of south-west China and biked and hiked through Norway’s Lofoten Islands and along the Danube into Hungary.

Europe was on our doorstep when we lived in London so it was easy for us to get around. One summer, we hiked the 660 kms of the Grand Traverse from Lac Leman (Lake Geneva) in Switzerland to Nice in southern France. We particularly like the mixed Muslim/Christian history of Spain and have walked the Santiago de Compostela (Way of St James) pilgrimage route. Later, we spent a lot more time in Spain researching our book A Room with a Pew – Sleeping our Way through Spain’s Ancient Monasteries.

We’ve also traveled through two of the so-called Axis of Evil countries – Iran and Cuba – but decided against going for the hat-trick and did not visit North Korea.

This year, we were in Tanzania and Ethiopia, and in previous years we’ve seen something of South Africa as well as survived a canoe safari on the hippo-infested Zambezi river in Zimbabwe.

We’re now at home at the foot of the Rocky Mountains in Boulder, Colorado. Could be worse!

Hard to say, but we like remote places, so our top three locations would likely be Greenland, Tibet and the American West – especially the canyon country in Utah.

For cultural and historic sites, we’d vote for the Mayan sites of Palenque and Tikal with their hidden jungle settings, the ancient Egyptian pharaoh tombs in the Valley of the Kings, and the 12th century temples of Angkor Wat in Cambodia.  The rock hewn churches of Lalibela in Ethiopia deserve a mention, too. 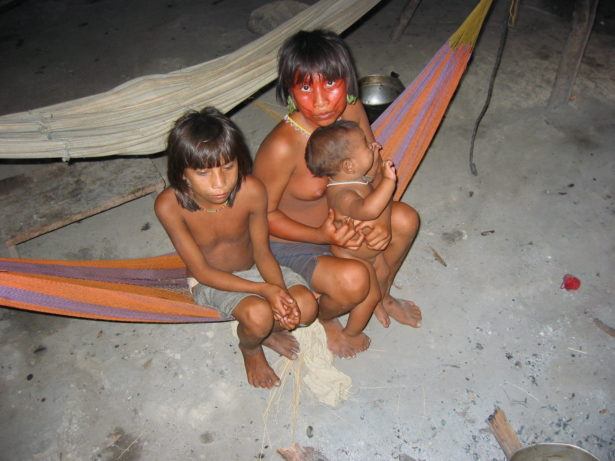 In the hut of Yanomami Indians we visited in their village on the banks of the Casiquiare river in Venezuela, when we were on assignment for Geographical Magazine.

The Zambezi canoe trip certainly focused the mind as we paddled around pods of hippos that made it clear they’d be happy to swallow us whole. Then, off the river, we camped on sandy river banks where elephants walked through the tents at night threatening to squish us.

Getting targeted as hostages by FARC guerillas in Colombia, dealt with in our book Along the River that Flows Uphill. We were on assignment then for Geographical, the monthly magazine of the Royal Geographical Society in London. It commissioned us to write an article about a strange river called the Casiquiare, which flows up and over the watershed that separates the upper Orinoco from the rivers in the Amazon basin – a unique feat that should not be possible. 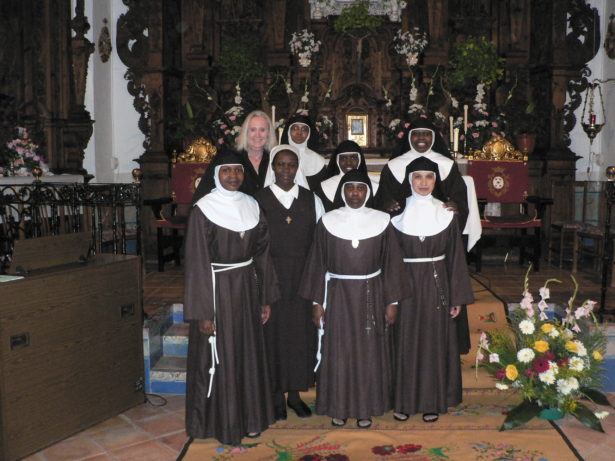 A group of African nuns we stayed with in their monastery in Marchena, Spain, when we were researching our book, A Room with a Pew.

On another trip, Bolivia proved a downer when ‘professional’ thieves stole one of our rucksacks with everything in it – credit cards, one of our passports, travel mascot (especially sad about this), and clothes. To the credit of the American Embassy in La Paz, we managed to replace the passport in 24 hours; then we shopped for replacement clothes at one of La Paz’s huge street markets. Every traveller we met on that trip through South America – literally every one of them – had been robbed, some violently.

Something similar happened to us in Addis Ababa, so we have to conclude: the thieves are a lot smarter than we are. Either that, or we don’t learn.

We were traveling through Spain, researching our book, A Room with a Pew – Sleeping our Way through Spain’s Ancient Monasteries, when we arrived at a monastery in Marchena. We expected a quiet, cloistered community deep in prayer, but instead gate-crashed a party thrown at the monastery by locals to celebrate the arrival of a new ‘shipment’ of nuns coming into the community from Africa. There was a music, wine, beer, tapas… and plenty of nuns, but no hint of a prayer. 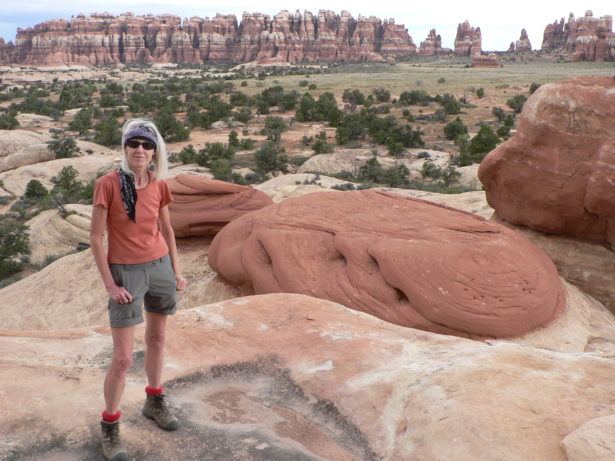 Undoubtedly, our brush with FARC guerillas, who planned to ransom us for $10,000 each. That came soon after an encounter with Yanomami tribesmen. We offered one of their chiefs a gift of number ten fish hooks and a couple of pounds of damp tobacco, which he grabbed, but only to throw it right back in our faces.

We worked full-time before we started to travel extensively. So we fund our travels mainly from savings. 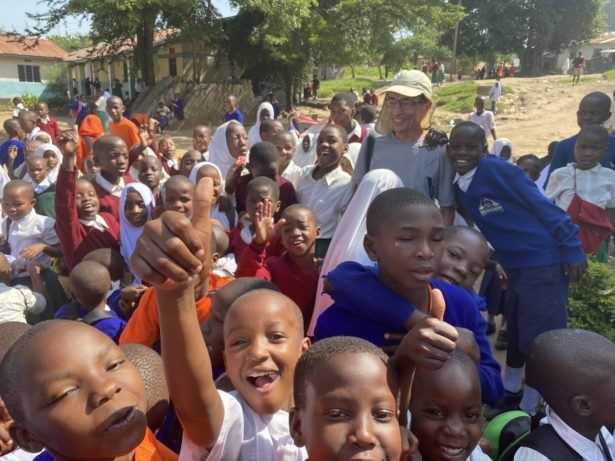 World Travellers: Miriam Murcutt and Richard Starks – Authors of Along the River that Flows Uphill from the Orinoco to the Amazon

Don’t delay. Start as soon and as young as you can.

Realize you can often get more out of staying in one place and properly exploring it than you can from constantly moving on.

Be prepared to learn some languages. Travelling is much more rewarding if you can speak to the locals – if only a little – in their own language.

International travel is going to be difficult for the rest of 2020. But we hope to get to Alaska and perhaps to Labrador if the US-Canada border opens up again. Russia and the ‘stans’ are still on our wish list, and we’d like to go back to Japan because it offers such a unique cultural experience.

Richard Starks and Miriam Murcutt are authors of nine books, including three novels (a political thriller, a financial thriller, and the crime story,(Money Doesn’t Talk It Kills); five narrative non-fiction books; and the novelization of a horror movie-script (The Brood), based on a script by the film director, David Cronenberg.

Their most recent books are the narrative non-fiction titles:

Lost in Tibet, Rowman & Littlefield, hardback, paperback and ebook, translated into seven languages, with an option for the film rights sold.

A Room with a Pew, Rowman & Littlefield, paperback and ebook.

Along the River that Flows Uphill, Haus Publishing, London, hardback and Kindle edition.

And coming soon is a novel we’ve written set in Utah during the 1950s and 1960s when the big Hollywood studios invaded red rock canyon country to film their blockbuster Westerns. To keep posted on the book’s publication date, promotional free downloads, etc., follow us on Facebook.

Thanks to Miriam and Richard for being the latest in my series of World Travellers! If you travel the world and run a travel blog or are a travel writer, please get in touch, you can be featured, either e-mail jonny (at) dontstopliving (dot) net or head to my contacts page and get connected! You can also subscribe to Don’t Stop Living by filling in the form below! Safe travels!