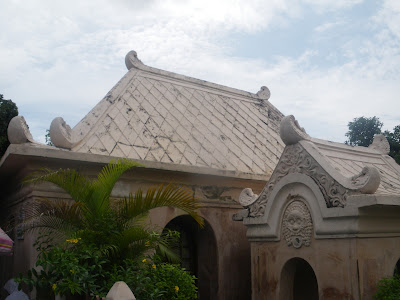 Our ongoing day tour of central Java in Indonesia continued to delight. We were mainly focused around the city of Yogyakarta (which is also sometimes spelt Jogjakarta). Just after visiting the Sultan’s Palace, housed inside the Kraton (City Walls of the Old City), we arrived after a very short drive at the Tamansari. Which is translated into English as The Water Castle. Here’s another report on my time backpacking in Yogyakarta. 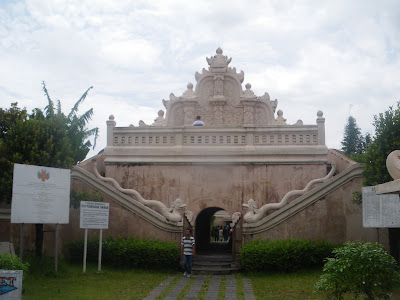 To be honest this was basically just an over elaborate old fashioned swimming complex, but one that was excellent to see. 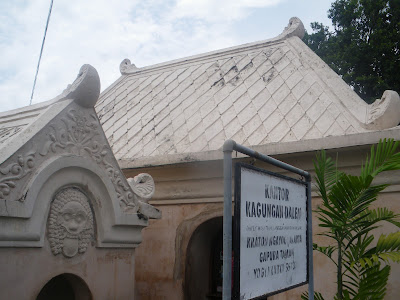 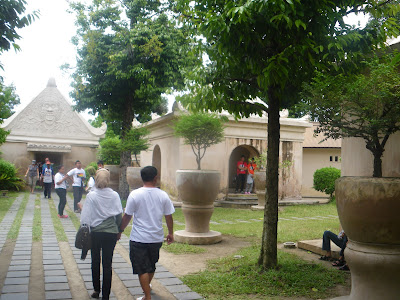 Owned by the Sultan of Java in those days, this was built for his family and servants to relax in large baths. 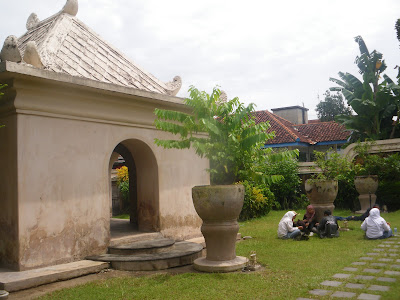 I haven’t been to Roman style baths in Italy or Greece, but this would be the Indonesian equivalent, and this survives in a decent state. 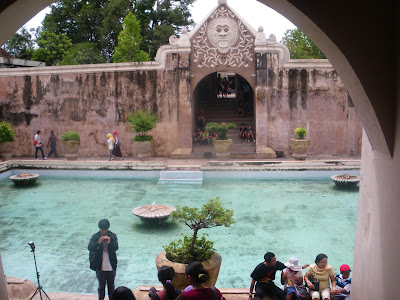 It’s very private. High walls closing off the world outside. This would have been a paradise back then. 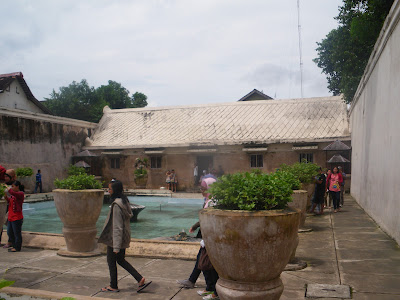 One of the pools. 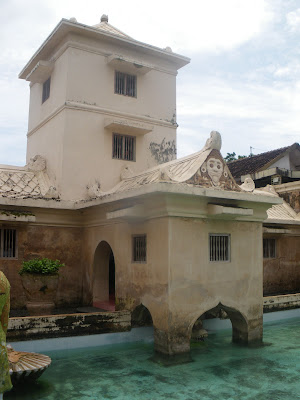 The main tower overlooking the main pool. Apparently the Sultan used to sit at the top spying on his ladies down below, and the one who impressed him the most could come upstairs to see him and do the deed. So the story goes anyway… 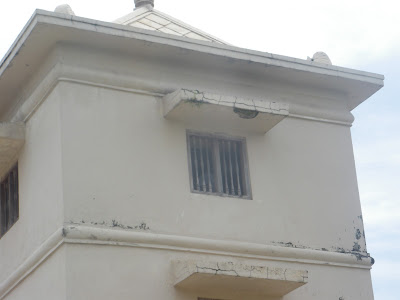 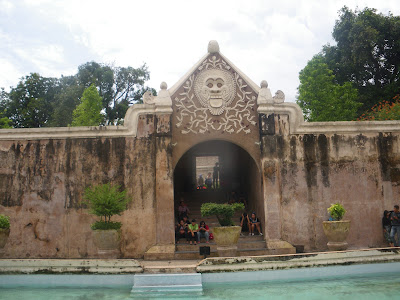 An odd face above one of the corridors between the pools. 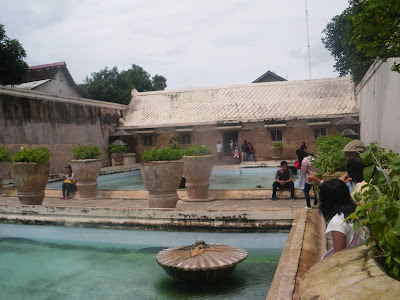 It was built in the middle of the 18th Century and is in relatively good order, though these days it is of course only open for tourism. 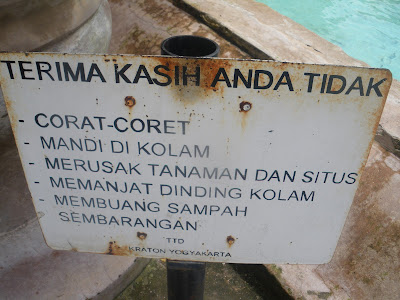 The rules. Presumably things like no glass, no nudity and no mixed sex bathing. 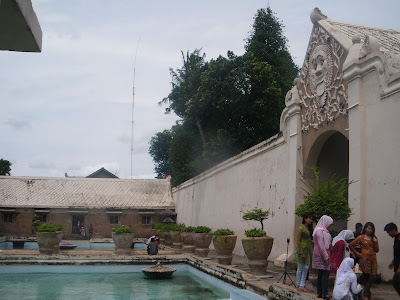 Although there were many tourists there when Rodrigo and I visited, most of them were locals (by that I mean Indonesians), apparent from their attire, notably their hoods. 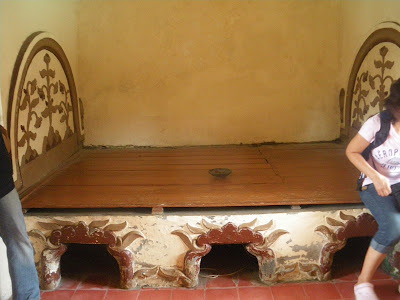 The Sultan’s top bunk for relaxing amongst other activities. 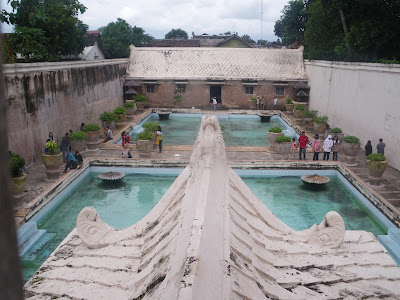 One of the Sultan’s views over his own personal leisure centre. 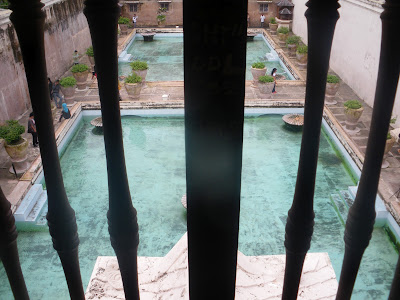 Spying on the main pool. Actually the view isn’t that great. 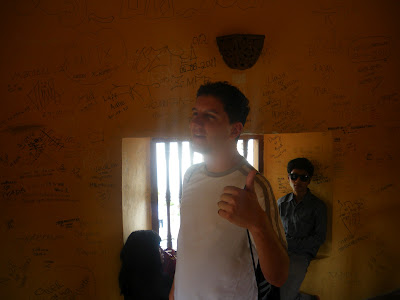 Rodrigo is Sultan for 5 minutes or so. Enjoyed the Sultan’s “lair” at the top. 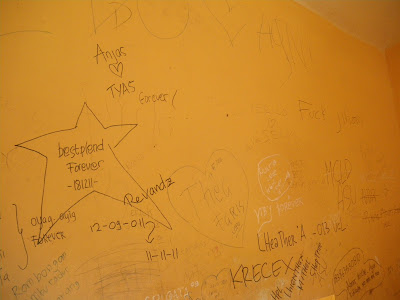 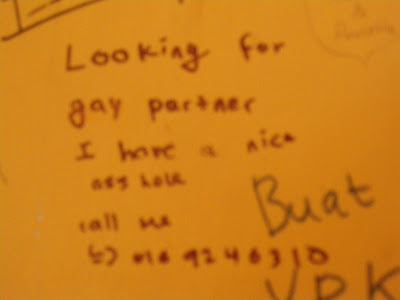 Comedy, and in English too oddly… 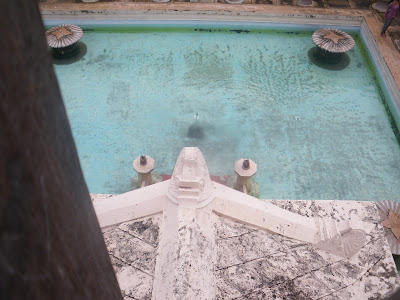 A better view from the Sultan’s “lair”. 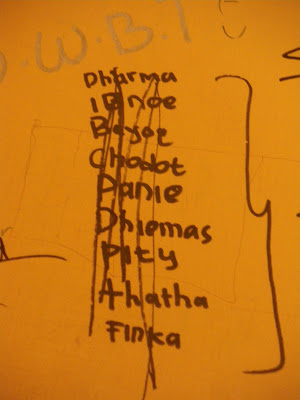 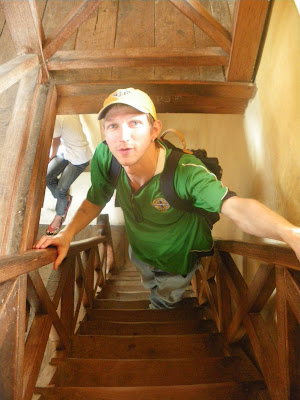 Up the stairs to the Sultan’s lair. 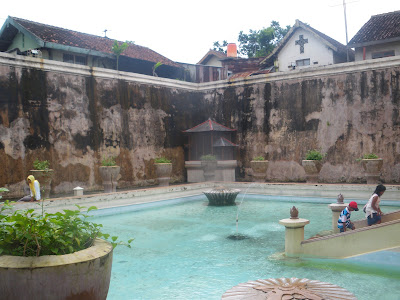 Another view of another pool, the boy and lady didn’t just walk out of it! You can walk right to the last step where the water hits. 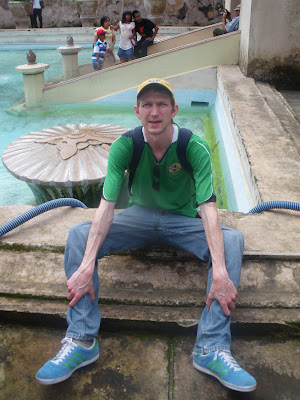 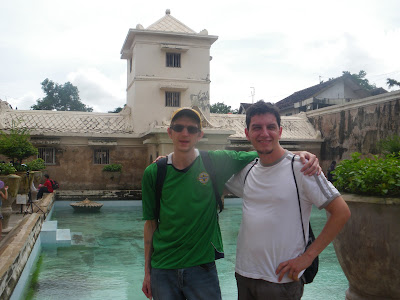 Rodrigo and I do Tamansari. It was an unusual part of the day trip, but one I enjoyed as I hadn’t actually seen anything like that before. The Yogyakarta Day Tour actually included a lot more than I had initially thought. Our next stop was for a special Indonesian Buffet Lunch inside the Kraton.
What Is It? – The Tamansari (The Water Castle) – basically the Sultan’s Leisure Centre
Where Is It? – Inside the city walls at the Kraton in Yogyakarta, Java, Indonesia
Who Went – Jonny Blair, Rodrigo Codoy Goelho
Nationalities Met – Indonesian
It’s On Wikipedia – http://en.wikipedia.org/wiki/Taman_Sari_(Yogyakarta)
Key Song –
THE KINKS – SUNNY AFTERNOON (fits perfectly):
My Videos –
HEADING TO THE TOP FLOOR OF THE WATER CASTLE:
INSIDE THE WATER CASTLE:
Join 15,017 Monthly Readers! If you enjoyed this article and LOVE travel and SAVING money, get e-mail updates from Don’t Stop Living – a lifestyle of travel! (It’s Free) 😉 Jonny