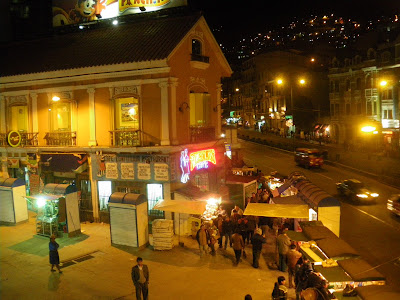 Backpacking in Bolivia: Night Bus To Potosi Via Oruro

Leaving La Paz had already involved a bit of mayhem, but now I was on the correct bus and relaxed as the world’s highest capital city faded out of view, at least until later on that week when I returned to La Paz. 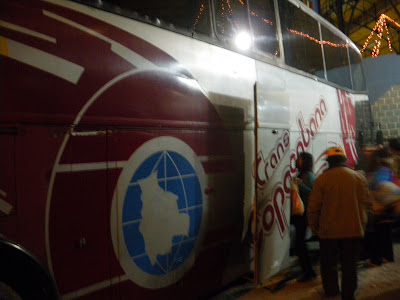 My bus by Trans Copacabana was excellent. And as usual, loads of “sellers” and “tramps” got on board in the first 45 minutes of the journey. I don’t know if this is for them to get a free ride further up the road, to sell stuff or just for the heck of it. 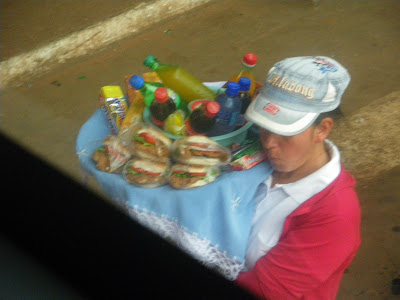 I didn’t mind them in Bolivia and Paraguay. In Argentina and Uruguay they were a bit too brash and up front and they annoyed me so I always tried to avoid giving money to them. However one of the Bolivian women selling food had her baby with her and she looked quite poor. She was struggling up the aisle and I was on seat 3 at the front, and felt a bit peckish so I bought a bag of crisps off her. She gave me a big bag!! Obviously I must have looked hungry but seriously these crisps cost me 2 Bolivianas, that’s 20 pence. In the UK a bag the same size would probably cost about 2 pounds. 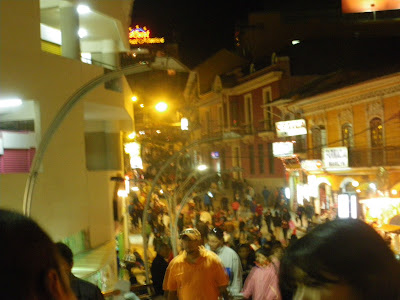 It was dark already and the lights of La Paz faded. I listened to my iPod and we made a number of stops in the outskirts of La Paz. Soon though it’s moonlight, the tramps and sellers have all got off and it’s just the seated passengers left on the bus, which is full and has Germans and Bolivians on board. 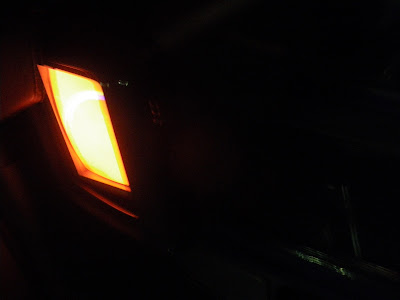 Many films come on the TV but I don’t really watch them. My music sends me to sleep as we veer down mud roads, rocky roads, tight corners and all you’d expect from a Bolivian bus. Naturally I was loving it. We pass sparse “houses” scattered along the main road every now and then and I finally awake at 3am, when we pull over in the city of Oruro for a 30 minute stop. Tea and food time, plus a toilet stop. 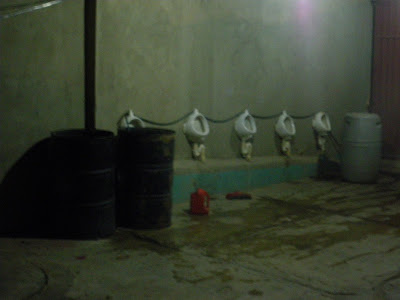 The toilet in Oruro. They charged 2 Bolivianas for a piss there. Most of the locals just went round the corner for free, but I paid in. At least it’s 20 pence towards the local economy I thought. Men and women piss and shit together here but on opposite sides of the same room. I caught of glimpse of some Bolivian mothers pulling their pants up and was shocked to see the teenage girls staring at me while I went to the toilet. Did I look that foreign?? Maybe they just wanted to see a white willy. Two of the girls were quite attractive, and though I would have liked to be photographed with them, somehow a toilet at 3am wasn’t the place to get your camera out. It was quite funny really.Though, obviously I did take one photo, that one above, just for the memory. 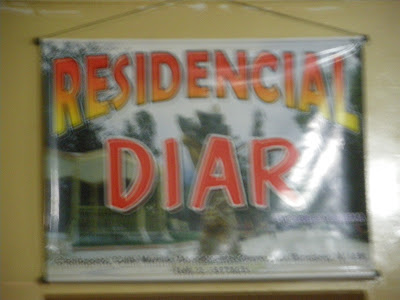 The toilet was part of the tea/coffee shop stroke restaurant on the corner, called Residencial Diar. So it was time for a tea and snack! 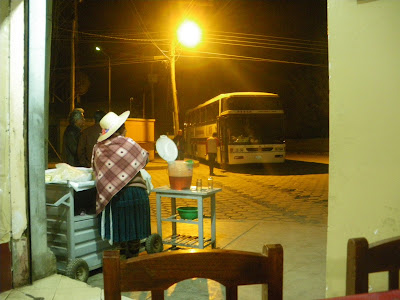 I admire the Bolivians. Especially the women. For example this woman stands there all the time just beside a bowl of tea, serving it every now and then for about 20 pence. She probably doesn’t know another way of life. Bolivia is the poorest country in South America, but definitely not the one with most crime or danger. The people there are very hard working. 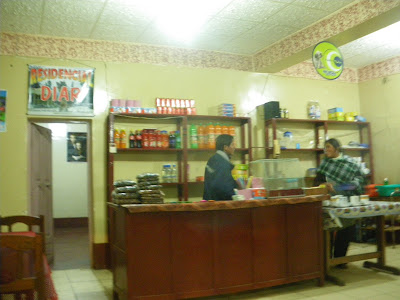 The restaurant itself. I paid 2 Bolivianas for a nice cup of hot tea – very welcome. And then I paid 4 Bolivianas for an amazing greasy fried egg roll. I think there was potato, pork, bread, egg, tomato and red sauce in it. For a total of 6 Bolivianas (60 pence) I had a midnight feast. I sat alone. Wee video below. 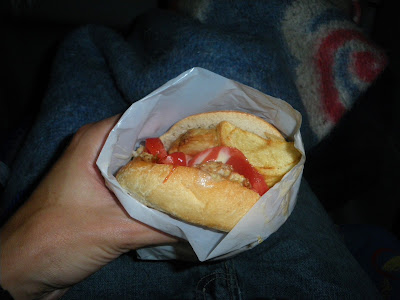 Devouring my 3am Ororu sandwich. This was lush and I sneaked it back onto the bus to finish it. Before succumbing myself to dream land as the bus got shaky rocky and went on many winding mud tracks and roads. 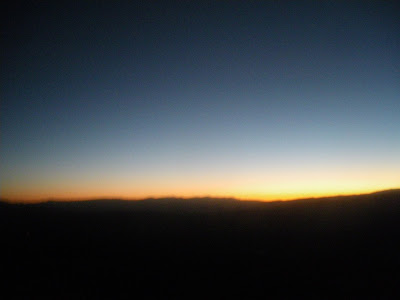 I took this photo as sunrose and we reached an even higher altitude on the edge of Potosi. It was almost 6 am when we pulled over at the bus station in Potosi. I was totally expecting the bus station to be the one on my map near the city centre, but no. We were stranded at a “new” bus station in a mining area, seemingly in the middle of nowhere. 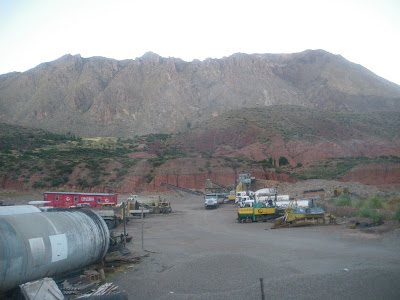 Come dawn we were on the edge of Potosi. A high city, industrial, a mining city, situated at 4070 metres above sea level. Nicknamed the Silver City back in the day due to the amount af silver mining going on. A current population of 149,200 means it’s by no means a small city. 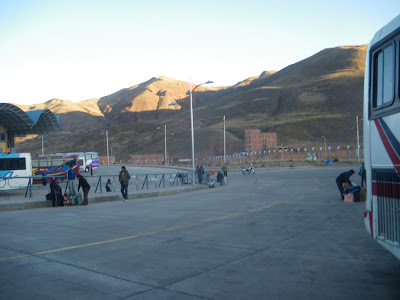 The lonely bus station, without a map and very different to where I expected to arrive… 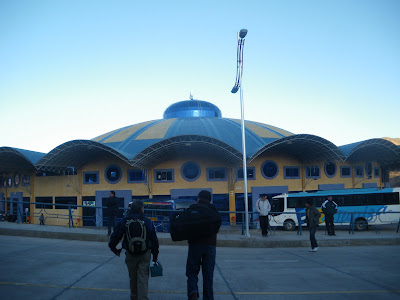 Leaving this bus station I teamed up with Robert, an English guy, who I randomly met when getting off the bus. We decided to head into town together and a split taxi was cheap. 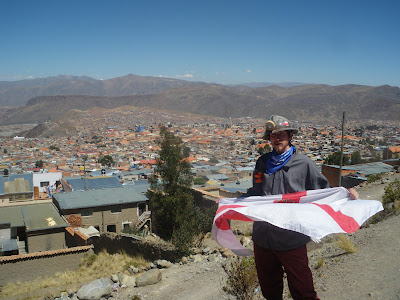 After breakfast at Koala Cafe with Robert a quick bit of sight seeing I booked myself on the mining tour while Robert headed onwards to Uyuni on a later bus. There’s me flying the flag later that day in the height of Potosi overlooking the city scape. This is probably the highest altitude my flag has even been photographed at, however the wind wasnt the best…
Key Songs for Potosi:
PULP – THE LAST DAY OF THE MINER’S STRIKE:
U2 – RED HILL MINING TOWN:
RED HOT CHILI PEPPERS – HIGHER GROUND:
HAVING A TEA IN ORURO, BOLIVIA:
ON MY NIGHT BUS LA PAZ TO POTOSI, BOLIVIA:
ME IN POTOSI SQUARE, BOLIVIA: