The backlog of my stories on this blog is getting absolutely ridiculous, life is busy and life passes us by, so I have had little time to reflect on these gracious moments of randomness through the years. As a way of catching up on myself, I aim to cover every AFC Bournemouth away trip that I have done to date, before I make my next AFC Bournemouth match. It’s some task, but I’m going to try and complete the back catalogue of amazing journeys if not for myself, but for my fellow Bournemouth fans and so I can close the door on the past matches and start afresh each time. There’s nothing worse than forgetting what you’ve done. So what better place to start than Swansea, my first “cross border” away trip!! Indeed, although Bournemouth play in the English League, it must be stressed that due to the League’s success and quality, four Welsh teams down the years have played in the English League, while playing all their home matches in Wales. They are Wrexham, Newport County, Cardiff City and Swansea City (two of them have now dropped through the trapdoor into non-league..). I do believe that playing in the English League makes teams like Cardiff and Swansea lose some of their Welsh pride and national identity though. However I was just as happy to be heading back to Wales in February 2006 to watch The Cherries take on Swansea City. Swansea City, The Swans were in the bottom tier of the English football league pyramid for a long time. At the time they played at Vetch Field, an old worn ground. However times had changed for the Swans, and by 2005, they were back in the third tier (League One) and had a brand new spanking stadium – with a huge capacity! In fact I did believe the capacity of the stadium was too huge for their fanbase at the time – the new Liberty Stadium boasting a seating arena of . On the pitch at Swansea City, things were excellent. They had already beaten us 1-0 at Dean Court in their first season back in the third division and had marched to the top of the table dispatching Bristol City 7-1 at home, almost forcing the Bristol club into relegation to the bottom tier that season. Swansea City in 2005 – 2006 were a team to be feared, and I really thought they would gain promotion that season (in the end they had to wait until 2008 – 2009 to go up – quite phenomenal given their impressive performances and newly found high profile status, no doubt aided by the move to the new stadium. This remains the only AFC Bournemouth match I have watched in Wales. Sure, I have seen us play Cardiff City (in 2004) and Wrexham (twice in 2004) but both at home and we also went to Wales in 2009 on route to Hereford away. I have also watched the Welsh National Team play in Cardiff at the Millennium Stadium – that night, supporting my country, Northern Ireland ghosted to a 2-0 lead only to draw 2-2. Memories of times in Wales had always been fond so I eagerly looked forward to it.

I did a radio show that morning on Nerve Radio, on 87.7 FM and gave a few Cherries mentions and shout outs to Mad Mike, my mate who accompanied me on this trip. Oddly, this is the only away match I went to with him. After the radio was done and dusted I caught a bus to Springbourne and Mike and I met for the first pint of the day in The Queen’s Park Inn on the Holdenhurst Road (above photo). Mad Mike was so called simply because he was actually Mad. I worked with him for a while in 2005 – 2006 in one of my part time jobs, which was working on the tills in Tesco at Branksome. Mike’s madness including putting on fake Irish accents and telling people he was my cousin to handing fake 20 quid notes to customers to dying his hair blue and “forgetting about it”. I christened him Mad Mike and he is a good laugh but he is definitely a tad too Mad sometimes.

After the pint in the Queen’s Park we boarded the AFC Bournemouth official away trip bus. I had brung a carryout and Mike and I got tore into the Foster’s tins which were still cold as was outside. Our route to Swansea was simple – up via Bath and Bristol and across the Severn Bridge into Wales. I didn’t make photos or videos of the entire day and as a result have just six photos and a couple of videos from the match to show for it. We stopped for a curry on the trip up at a motorway service station. Must have been on the English side of the Severn Bridge. Soon we were in Wales and a few fellow Cherries bus mates told stories of the last time Bournemouth had played Swansea – it would have been a few years before and the match was at The Vetch, or Vetch Field. The bus driver got confused too which was story of the day as actually he drove us to Vetch Field, only to find the ground was no longer there!

A quick change of direction and it was amazing to arrive at the splendid new Liberty Stadium, also home of Osprey’s rugby team. It was a state of the art stadium in a massive car park, and we had about 2 hours until kick off, so it was time to find a pub. We looked no further than Frankie and Benny’s Pub which was right opposite the stadium, and although it’s normally a family style restaurant, this was a Tuesday night match and the pub was welcoming home and away fans with football shirts on into the bar. I wore my Northern Ireland top hat for the night and Mike and I made a lot of friends with the Swansea fans. Including the guy above who flicked a red hand at the camera for the photo. He was a Swansea and Wales fan with a soft spot and understanding of the Northern Ireland situation.


We drank long and hard there. Mad Mike, wasn’t the best cameraman but at least he got this shot of me in Frankie and Benny’s pre match. I bought a match programme which I remember was A4 size and massive. Few other photos remain from the day sadly due to my ex-girlfriend breaking my hard drive. 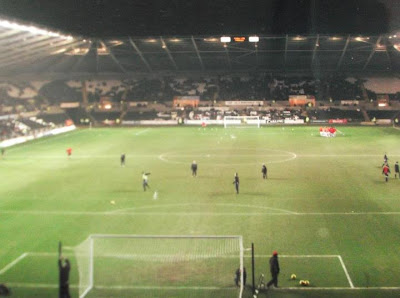 Once inside the stadium we could even get a pre match beer before the action got underway. Very few Cherries fans had made the trip. 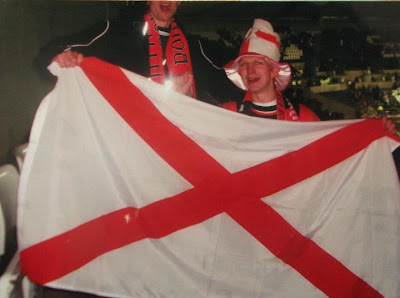 We were in the back row and the Cherries had taken a very small amount of away fans. However we continued to sing for 90 minutes, at times it was just Mike and I. Plus Nonny gave a few renditions of Red Army! The above is the only remaining photo of Mad Mike and I in the stands. Swansea cruised to a 1-0 win and we didn’t really threaten. The bus journey home was fairly unmemorable, but it had been yet another amazing away trip with the Cherries, and my first away match to a different country. As irony would have it, in 2008 and 2009 I also visited another country with the Cherries (Scotland and Wales again). Indeed my 2009 farewell to the UK was our away trip to Hereford United (a 2-1 defeat), covered in 9 parts, here: http://jonnyscottblair.blogspot.hk/search/label/Hereford

But for now, Mike and I had done Swansea. We haven’t been to an away match together since…

In closing I’d also like to say that we went to Swansea away in February 2006 and lost 1-0, yet Swansea City didn’t get promoted to The Championship until 2008, a season when we actually beat them 2-1 away. Dan Darch my good mate was at that one and we scored twice in the last minute!!!

Via – Severn Bridge and a Motorway Service Station 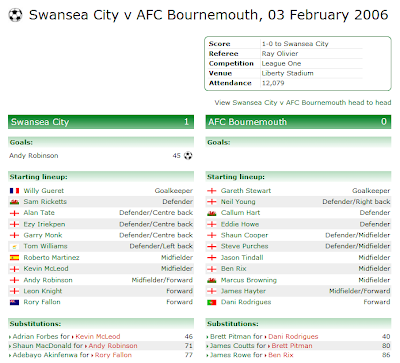 
My Videos –
(To be honest I’m very happy that these videos survive and that I took them, however short, these bring back some of the memory of Swansea for me):


MIKE AND I SINGING “ENGLISH LEAGUE YER HAVIN A LAUGH” INSIDE THE LIBERTY STADIUM: