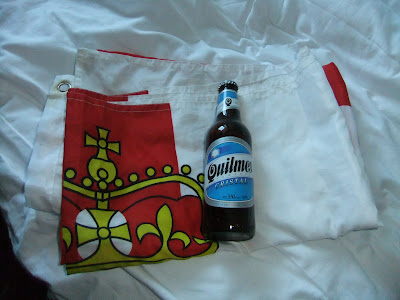 The Antarctica “Carryout “: Having a Beer on King George Island 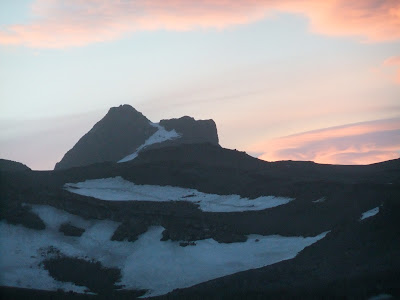 Admiralty Bay and the little island of King George Island (one of the South Shetland Islands) became my final landing on the dream like continent of Antarctica. I believe there are a few bars in Antarctica – probably at the Ukraine Vernadsky Base and at one of the US Research Stations (neither place where we would visit), but I was keen to have a beer while standing on the continent of Antarctica on our final night there as a salute to the wonder of nature and to drink with a few fellow ship mates to celebrate an amazing trip. 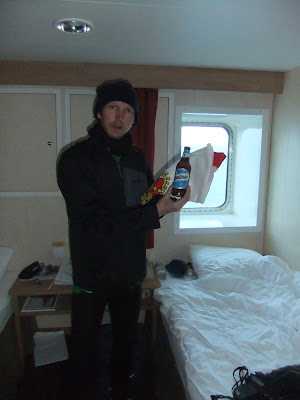 In Northern Ireland we use the word “carryout” to refer to alcohol that is purchased in one place and consumed at another. This word in my opinion is perfect English for the description, but hasn’t travelled well. Indeed when I mentioned “carryout” while living in Australia, they thought I was referring to a cash and carry, and in England, they thought I was hungry and off for takeaway food. No – a carryout is and always will be alcohol. 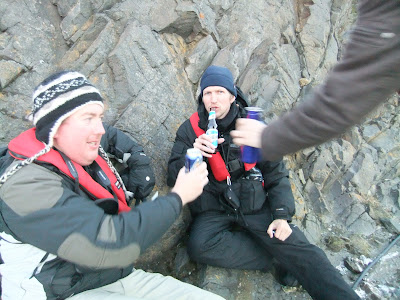 The best thing about having a beer in Antarctica is that you don’t need a fridge to keep it cold. In fact my beer, a Quilmes from Argentina (bought in the port of Ushuaia) was warm on board the ship, yet just 30 minutes exposure in Antarctica at King George Island and it was chilled and ready to be drunk. 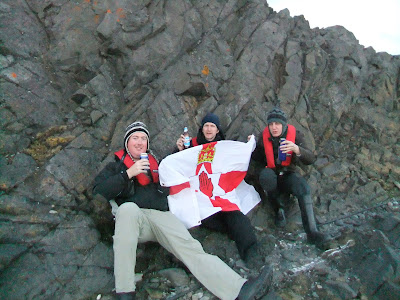 I got together a wee group for the drink. It consisted of Brazilian Rodrigo, Australians Mark, Russell and Ilise and Austrian Monika. That’s myself Russell and Rodrigo toasting to an excellent time in Antarctica with my Northern Ireland flag. 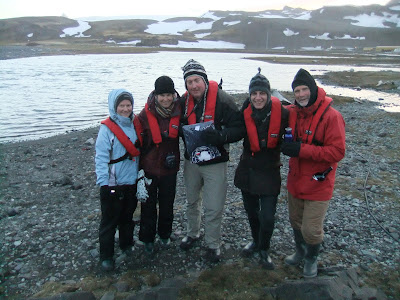 From left to right – Ilise, Monika, Russell, Rodrigo, Mark. Near the Polish base – the Arctowski Station at Admiralty Bay on King George Island, where we had our beer as a final toast to Antarctica. 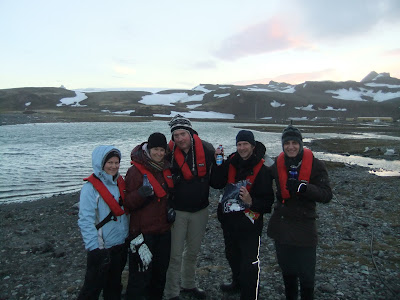 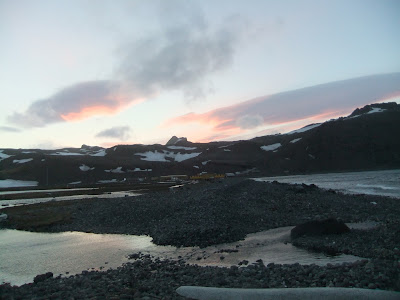 The view from our custom made bar (sitting on a few rocks which were sheltered from the wind). Once I had finished my beer, we waited in line as the southern sun faded and some stormy winds caused our Zodiacs to bob up and down as we left behind the wonderland of Antarctica and headed back to the boat, where “The Polar Bear Bar” awaited for more celebratory drinks with the crew.
Bar of Choice – a few rocks by a large sheltered area at Admiralty Bay on King George Island, close to Arctowski Polish Station
Beer of Choice – OK I wouldn’t have chosen it but it was all I had on board – a Quilmes from Argentina (incidentally one of my most hated beers, though one which i drank in the most special of places…)
My Drinking Buddies – Russell, Rodrigo, Monika, Ilise, Mark
KEY SONG:
CAST – LIVE THE DREAM:
LIVING THE DREAM – HAVING A BEER IN ANTARCTICA:
Join 15,017 Monthly Readers! If you enjoyed this article and LOVE travel and SAVING money, get e-mail updates from Don’t Stop Living – a lifestyle of travel! (It’s Free) 😉 Jonny

1 thought on “The Antarctica “Carryout “: Having a Beer on King George Island”