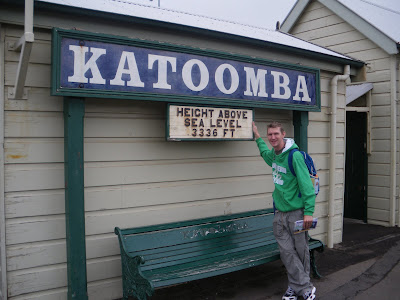 Katoomba itself is a bit special. Situated 3,336 feet above sea level, it appears to be the largest settlement in the Blue Mountains, New South Wales. I’d never heard of it until I arrived in Australia. It was mentioned in passing a few times as part of Blue Mountains trips which were organised by our hostel, Chilli Blue and also by local travel companies. Daniel and I wanted to go, and see the beauty of the Blue Mountains, and Katoomba was the place to stay to see it all. Situated in between Leura, Wentworth and Blackheath, Katoomba’s southern parts overlook the Jamison Valley, making it the obvious choice of a place to stay while trekking the Blue Mountains. 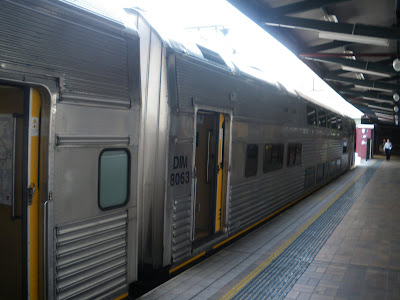 The area is rich in beauty. Forests, valleys, gorges and treks all are nearby. Wildlife and nature are a natural part of Katoomba life. Katoomba itself is a quiet peaceful town, one which I found great joy living there for over a week. It was 8 days we stayed there in total, though initially Daniel and I had planned to stay just 2 nights. It became a haven, the respite from the madness of Sydney and a good base while we looked for a proper flat in the city of Parramatta, where we now reside. After the madness of Halloween and squeezing the life of Sydney to a Pulp, we needed out of the city and out of the rut of Chilli Blue hostel. On a quiet Tuesday morning, we packed our bags and exited the hostel for the final time. There were three of us. A rather quiet and shy Natalja and the excited uncertainty of Mr. Evans knew it was end of an era stuff. Not emotional (though I was), it was time to leave the ladies behind…go our separate ways and for Daniel and I, we had to see the Blue Mountains and relax while I waited on my job news, and the probability that we were bound for Parramatta eventually… 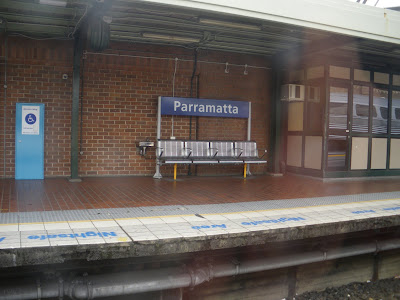 From the south entrance to King’s Cross station on Victoria Street, Sydney, another new dream began. We said our goodbyes to young Natalja, bound to return to Europe after her time away. We departed on good terms, who knows if we’ll ever meet again. With a proper goodbye hug, kiss and wishes I walked down the steps to King’s Cross, and as I gazed back up, Natalja had gone, and that was that. Daniel also left behind his two female travel buddies at the same time. Without a proper goodbye, Charlotte and Hayley remained in the rut of Chilli Blue while within 10 minutes, our Waterfall line (the blue line) train had cruised out of King’s Cross station and the wonder of Katoomba could begin, bringing with it a wind of change of its own. 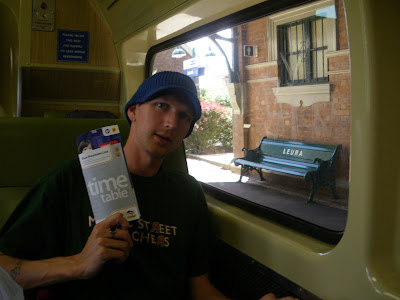 It was quite hard to believe how easy, cheap and quick it was to get from Chilli Blue hostel to our next hostel deep in the Blue Mountains. The ticket for the train (a single – hence the “no intention” to return) cost just $12.40 from King’s Cross to Katoomba. There would be just one change – at Central Station. We had all our possessions with us – for me I had accumulated 5 bags somehow, though this included my food and dirty clothes in a bag each – both of which would be condensed, eaten or thrown out in Katoomba. We changed from the blue Waterfall line onto the yellow Blue Mountains Line and that was us direct to Katoomba. We knew nothing about Katoomba, other than it was in the Blue Mountains, we had a hostel booked there and there was a famous set of natural rocks called “The Three Sisters.” We were about to discover there was a whole lot more in Katoomba and nearby villages. 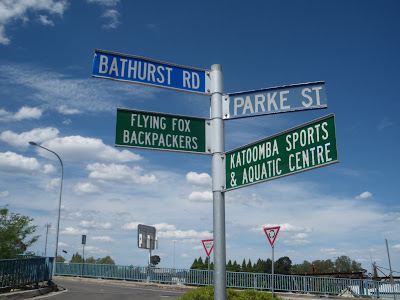 After some lunch of samijes and wafers on the train, we were soon at Katoomba station, which is 3336 feet above sea level. The train journey there only took about 2 hours, and was as relaxed and scenic as you could get. Another train journey to savour on my life on this here planet. I certainly enjoyed the journey – the train got higher and higher as we passed through Harris Park, Parramatta, Penrith, Emu Plains. In fact it was just beyond Emu Plains that I saw my first kangaroo – a few brown kangaroos hopped around in a field. From Katoomba train station, we exited with our heavy bags and were straight up into the town/village of Katoomba. We were already on Bathurst Road, where our hostel was, at number 144. The previous day I had phoned up the Blue Mountains Central Backpackers Hostel and booked 2 beds in a dorm for 2 nights. The cost was $23 Dollars a night each. 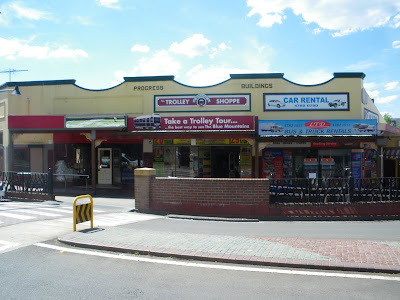 We walked past a pub on the left called The Carrington Hotel – we thought well that could become our local for the next few nights. Past a roundabout and a corner Hotel/Pub (The Blackburn), there was a small bit of waste land and then our hostel! It was ironic that the last two hostels were both number 144 on their respective streets. We got to the reception and were welcomed by a spacious lounge, dining area and the nice receptionist who informed us that it was book two nights get a third night free, so at that stage we knew it was to be a minimum of a three night stay. It was already apparent that we felt at home there, were away from the madness of Sydney and could check out the whole area…and more. 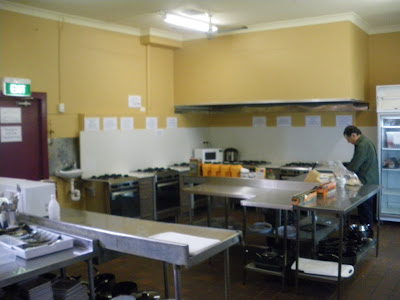 
It was massive, it is one of the best hostels I’ve stayed in ever, without doubt. Spacious rooms, showers that work, free washing machine, free internet (unlimited, and computers were always available), free tea and coffee, free tumble drier, free TV, free pool, free air hockey, great offers (we got 2 free nights out of 8), friendly staff. 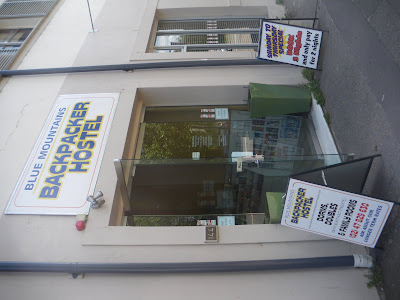 The kitchen at the hostel was excellent – we cooked decent meals twice a day (once in the morning before leaving on a trek – and once in the evening when we got back).


The facilities also meant we could watch some football – we saw Chelsea bate Manchester United 1-0 in there and also watched Hibs v. Hearts and Falkirk 3-3 Celtic. PLus have a few games of pool, table football and air hockey – all for free. 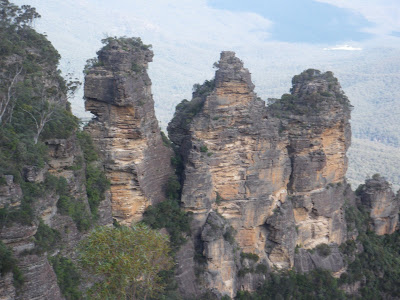 I’ve already written about some of our Blue Mountains treks, and during 8 days there we did almost every trek we could have done and also had 3 or 4 nights out and some time to relax in the hostel, chill out and enjoy Katoomba. The first day in Katoomba it was important to check out the town itself. We walked down the main street past an Anglican Church, all the local shops and the main hotel – the pretty Carrington. This was Katoomba Street – an up and down hilly road which leads to the most famous point in the Blue Mountains – Echo Point. We went there to see the views over the Jamison Valley and to the left the Three Sisters Monument. 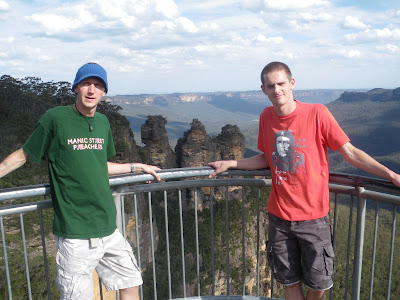 From our hostel, Echo Point is just a 25 minute walk – straight along Katoomba Street past spaced out housing and up and down hills and there it is…at the end of the road, and with a Chocolate Factory on the left just before it, and some swanky restaurants and commercial centres close by. The view was pretty stunning, but also a bit too “cliched” and touristy for our liking. Lots of tourists and travellers come here, get their photo took by Echo Point and the Three Sisters and then leave, often having driven there. Daniel and I didn’t fancy that at all, so we got our “touristy photos” took there and then and decided we would be trekking through the forests and mountains while we were there. Later on that week we actually went up to the Three Sisters, rather than stared at them from afar. We touched the rock by the entrance, and thats as far as you can go. 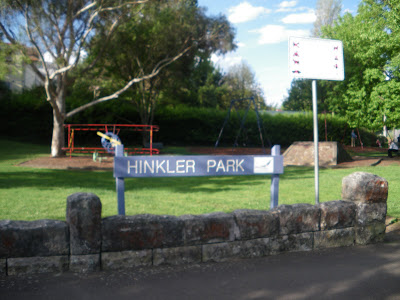 The town itself is basically a safe haven mountain village. There’s a few sights to see by day, basically the small “Hinkler Park”, the Chocolate Factory and another hilly park with a bandstand, called “Kingsford Smith Memorial Park.” None of these involve trekking, and are away from the Jamison Valley part of Katoomba. We also enjoyed quite a few nights out in Katoomba. We done all the local pubs, the local cinema (The Edge) and also saw rock band “Philadelphia Grand Jury.” There’s plenty more of Katoomba in other parts of this blog.


Bars visited – Hotel Gearin, The Blackburn Hotel, The Bank, The Carrington Hotel, Baroque (that’s all of them…)