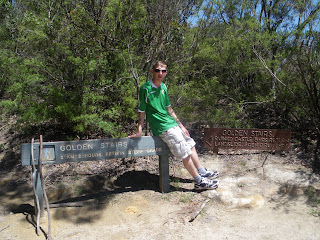 The Golden Stairs get the honour of being in my first blog post of this new decade. The Golden Stairs were first mentioned by Martine to Dan and I in the pub one night in Katoomba. It sounded interesting, and the very next day we walked past the entrance/bottom part of The Golden Stairs, on route to the Ruined Castle. However on this day, we decided not to do the Golden Stairs and save it until the next time. In the end we left it to be the last part of Jamison Valley we would complete, on our last day in The Blue Mountains. The following day we would leave and move into our current flat in Parramatta. 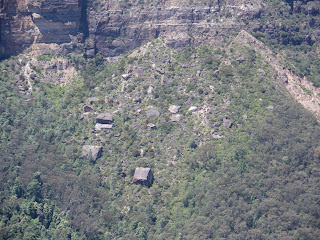 So on our last day in Katoomba, we were up early, left the hostel and headed to Scenic World, the rather unwanted obscure commercial area of the Jamison valley. On this particular day we both had a free trolleybus pass for the entire routes around Katoomba and Leura. So we decided to play it a bit lazy for a change and get the bus from near our hostel directly to Scenic World and walk to the Golden Stairs from there. 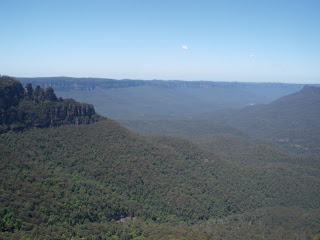 We got to Scenic World early and then decided to walk round the cliff roads and to the entrance to the Golden Stairs. It wasn’t close, it was a good few miles on a hot day up a winding road above the cliffs. On route we took a left out of Scenic World and along the cliff path. The first stop was at the lookout point Eagle hawk. This gave us a totally superb view of the Jamison Valley from the south west corner. You could also see a clear view of the Three Sisters rocks, so we naturally posed for a few more photos against that backdrop. 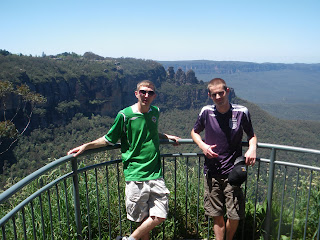 We met a guy there from England and he took the photo of us. We walked on round the cliff top roads (there was no obvious path) and passed another two lookout points. We got more good views from a quiest part of the valley. The first one was Landslide Lookout, which had a great view down to the area which had been formed from a landslide in the 1930s. We had already walked through the landslide a few days earlier. 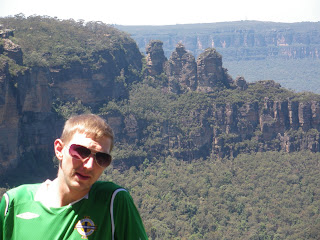 We then went past Cyclo Lookout past Laurel Street, some isolated housing and we then saw the entrance to what is known as “Narrow Neck Road”. Its a long winding road and was boring to walk down. It was a hot day, so water was essential as was sun cream and insect repellent. The insects were starting to annoy me, buzzing around my ear! After a long walk down that Narrow Neck Road, we finally came to the entrance for the Golden Stairs. We were at the top of the stairs. 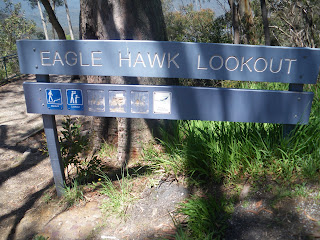 Originally the plan was to walk down the stairs and back via the Furber Steps and through the landslide. We sipped our water and headed down the steep “stairs.” You won’t be surprised to hear that they weren’t stairs and they also weren’t golden, but that wasn’t the point. Except from Mount Solitary (which we decided not to do), this was the last section of Jamison Valley that we had to complete. 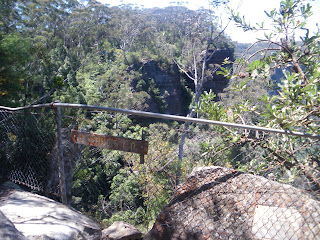 There was only one proper lookout point on the way down, and we marched quickly down the stairs. Obviously it was just a cliff/hill descent, there wasn’t actually any steps or anything golden. Just the elaborate name. “Was that it?” I quizzed Dan when we got to the bottom, after just 20 minutes. It was certainly an easy path down. We stopped and paused for a moment at the base of “The Golden Stairs”, before deciding it would be a good idea to go back up them and head back that way. That way we got to experience going up and down the Golden Stairs. 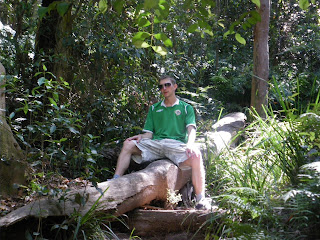 Predictably it was a lot harder going up. We took more stops, drank more water and found it harder breathing. We saw a snake on route as well. But we still did it in less than 30 minutes. Pretty quick. We had made it to the top and walked back round to Scenic world just in time to catch the free trolleybus ride we had wanted.


GOING DOWN THE GOLDEN STAIRS:

GOING UP THE GOLDEN STAIRS:

2 thoughts on “Backpacking in Australia: The Golden Stairs, Blue Mountains”