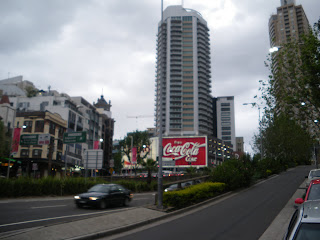 Sydney itself is the place most people end up in Australia at some point. Yes its big and great and yes it has some amazing things to see, but don’t get caught in the “rut” of Sydney. There’s more to Australia than the city of Sydney. Although for the benefits of this post, I’ll outline the fantastic things to see and do in Sydney! As there are some…Which is where our flight landed and where we began the Australian dream. Its quite simply the biggest city in Australia, even if its not the capital. 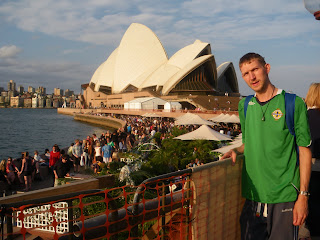 The usual sightseeing has to be done – most people on the planet could name Sydney Opera House and Sydney Harbour Bridge as two main sights in the city. The Opera House is every bit as special as it looks. I’ve been there 3 times now, twice by day and once by night. The odd shaped rooves are made up of small white, lilac, yellow tiles, something you wouldn’t know unless you’ve been right up to it and touched it. The first time I saw the Opera House, it looked like it had black nets on it, this was a night time myth, and was simply the grouting in between the tiles. You can walk all the way round the Opera House and gaze in at the entrance to Sydney Harbour. Its a beautiful sight. You can go inside the Opera House, even if you’re not going to a show. 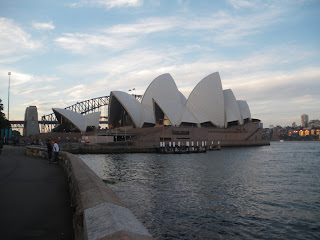 We went in, almost “just to say we’d been inside”, and couldn’t go any further than the main lobby without tickets. In the lift, security is strict. Daniel jumped up and set off the lift alarm by breaching the line! We got stuck in the lift at Sydney Opera House. There are some marble stairs inside leading up to the various theatres, and there is the main ticket office and a shop. Outside the main building is another small building, where private parties are held. Almost every night you will see well dressed people wearing suits and sipping champagne here. This overlooks Sydney Harbour to the right (and Sydney Harbour Bridge) and Farm Cove on the left, where the large Botanical Gardens is. 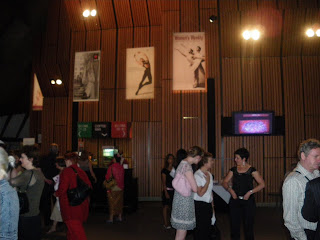 I first heard of Sydney Opera House back in 1988, when I got into Kylie Minogue and Australia became a major talking point of interest in the UK, thanks to Kylie, Jason, Rolf Harris, Neighbours and even Crocodile Dundee. It took me 21 years to get there, but it was worth it. It’s not something you want to say you’ve missed while visiting Sydney! 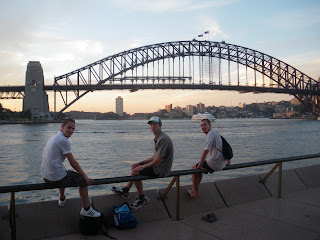 2. SYDNEY HARBOUR BRIDGE
This is the massive, iconic bridge linking “The Rocks” area/Dawes Point to Milson’s Point in North Sydney. If you really want to spend shiploads of money you can pay 200 Australian Dollars to “climb” the bridge, which basically means walking over the top part of the bridge and getting the best views. However as cheap travelers nobody in their right mind would pay that price! That’s more than 3 weeks rent in our flat, so we walked across for free!! 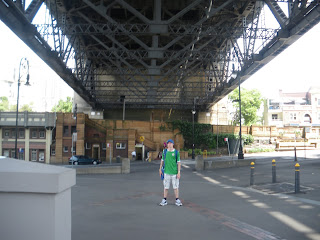 Plus its a much longer and nicer walk that way. From the information point/main entrance we are up the stairs onto Sydney Harbour Bridge. A massive structure, reminiscent only of the Brooklyn Bridge in New York. No others I’ve seen come close. It was up and past the traffic onto the main bridge on a hot day. 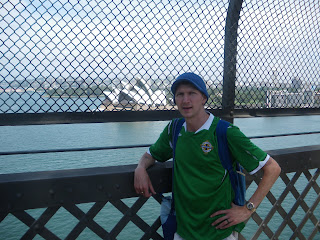 It took just over half an hour on a hot day to walk across the bridge. The views were great, but we kept getting run over by cyclists. It was just me and Daniel that did the walk across the bridge. Natalja wanted to stay in the hostel quite a bit, and my mate Neil hadn’t yet arrived. Once on the other side you’re at an area called Milson’s Point, which has some shops, a park, a tube station and a pub, which I have been in 3 times. We had a beer in there on the last day of the last decade and the first day of this decade. 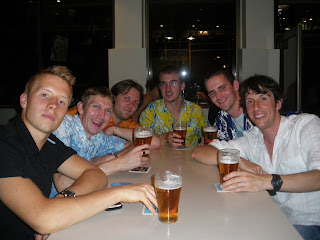 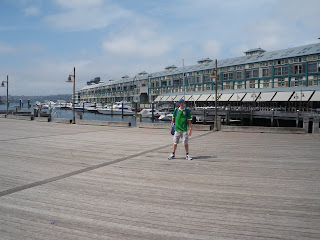 3. WOOLOOMOOLOO
This is the harbour on the east side of Botanical Gardens, just north of the areas Darlinghurst and King’s Cross. While staying in King’s Cross, we often walked through Wooloomooloo and round past Botanical Gardens/The Domain to Sydney Harbour front where the Opera House lies. 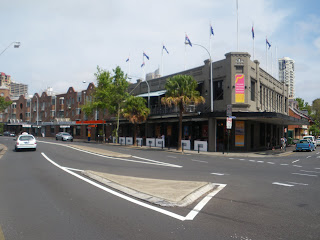 This area known as Wooloomooloo is also the home of Australian military stations, and Russell Crowe owns a house there. Posh expensive flats line the harbour. 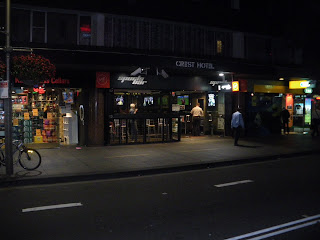 4. KING’S CROSS
You’ll find that loads of places in Australia steal the names from their British Counterparts. This is another one, King’s Cross. We stayed in this area and it really is the party zone! We had numerous nights out there in a lot of bars, and also ate out quite a bit using various offers we knew about – pizza for $5 in The Elk, 2 meals for $10 Dollars in the King’s Cross Hotel. The area is famous for backpackers, hookers and clubs. I enjoyed staying there, but we’ve done it now, no real desire to go back.

Pub – O’Malley’s (mine and Daniel’s local for a long time!) 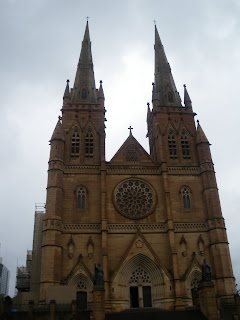 5. REST OF SYDNEY
There’s lots of other places to see. St. Mary’s Cathedral at Hyde Park is an excellent centrepiece on the main roads leading down to the harbour. I walked past it daily, and went inside once while in Sydney. At night it lights up over a swimming pool. And this is also opposite the National Museum, and the entrance to William Street, which leads up a hill to the King’s Cross area. 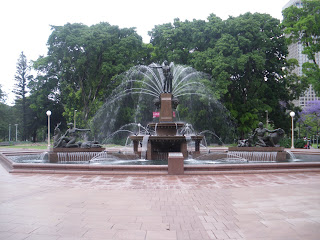 Adjacent to that is also the cool Hyde Park, again borrowed from London, this one much smaller and with a few monuments, a large grassy area and often they hold festivals and events in there. 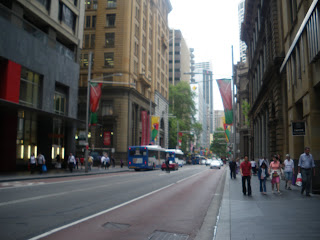 The main streets themselves are not dissimilar to London or Belfast. Buses are more frequent than cars, lots of busy commuters around and McDonalds/Starbucks on every corner (OK, more commercial than Belfast then!). Its a big city, but not one I felt I would actually want to live in for a prolonged period. Thats why after 9 or 10 days, we headed off to the Blue Mountains, and are now living in Parramatta.


The lure of Sydney hasn’t kept us away though – its only a short train or bus ride from Parramatta so we have been back a few times since, and will pass through Sydney again on our next adventure – probably a bus to Canberra, capital city of this land down under.


OTHER PARTS OF SYDNEY TO BE COVERED (or already covered) IN SEPARATE BLOG POSTS:


KYLIE MINOGUE – I’VE GOT TO BE CERTAIN

CROWDED HOUSE – WORLD WHERE YOU LIVE

2 thoughts on “Backpacking in Australia: First Impressions of Sydney”