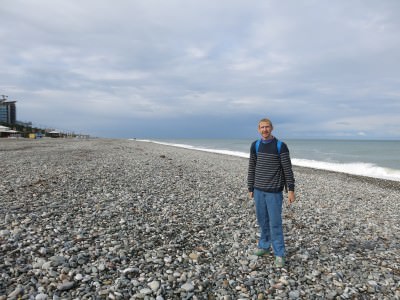 Backpacking in Batumi, Georgia – my tips.

It would be a bit ridiculous to write Batumi in Georgia off completely as a mere “pass through town” and we almost made that the plan. The reason is, we only headed to Batumi in order to get our visas for Azerbaijan. In fact the odd thing is, this was also the only reason we went to Trabzon in Turkey. Batumi and Trabzon despite both being “pass through towns” and “visa towns” are both totally awesome towns to see! We were in for a shock – backpacking in Batumi reminded me of some old school English seaside resorts like Southend, Brighton and Bournemouth – crazy as this little Georgian town runs alongside the Black Sea. 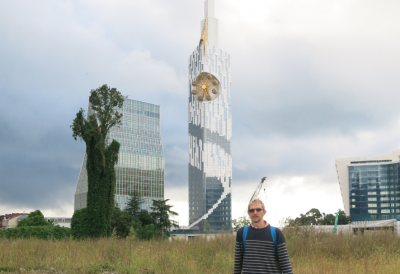 Backpacking in Batumi in Georgia – some crazy elaborate buildings down near the seafront.

While backpacking in Batumi and hanging around waiting on the visa, we got to the usual sightseeing and really enjoyed ourselves. There are a lot more than 10 things to check out in Batumi, but I’ve condensed it here for you. Nice and concise and straight to the point. Before I start, I have to say I really would recommend Batumi for a visit. It’s a proper chilled out friendly town, though it does get a bit over touristy in the summer, we headed there early Fall (October time). Here’s my top 10 cool things to check out. 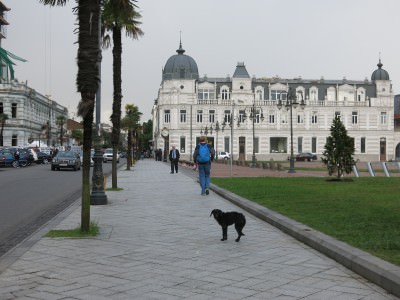 Backpacking in Batumi – being chased by a stray dog in Europe Square!

1. Batumi Beach
Batumi is to Georgia what Bournemouth and Brighton are to England. It’s a coastal and lively seaside resort that gets busy in the summer and dies down in the winter. We were there in Autumn/Fall and had the freedom of the beach to ourselves. 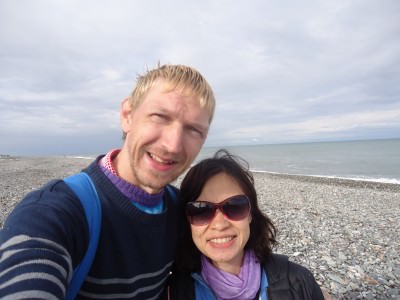 2. Cathedral
Christiany is evident all over Georgia. The sparkling central cathedral is worth heading into. Free of course, even though a few tramps lurk around outside asking for money! 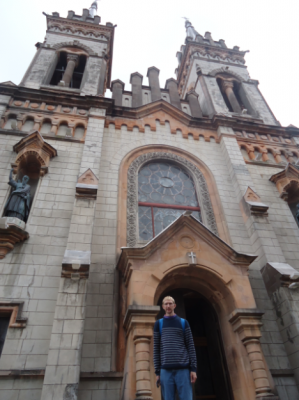 3. The Black Sea
If you’re in Batumi you need to at least visit the fantastic Black Sea. For us it meant we would see the Red Sea, Dead Sea, Mediterranean Sea , Caspian Sea and Black Sea – the 5 main seas in the region all in the space of 6 weeks on our Middle East and Caucases Tour. A pretty incredible achievement in fact, given that we didn’t even want or try to do that. 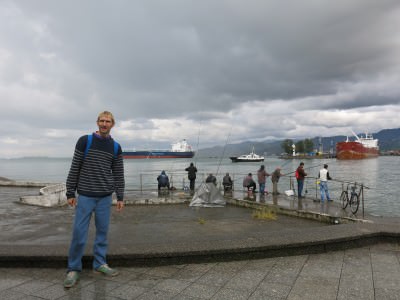 Down by the massive Black Sea at the seafront in Batumi, Georgia.

I loved walking by the fishing port in Batumi. There’s an international air of magic in the air here. Boats leave from Batumi to Turkey, Ukraine and Russia. What a journey any of those would be, but for us it was off to Baku in Azerbaijan next.

As the title suggests this is a cool square in the city. Old memorials and pretty buildings make it a centrepiece – it’s very quiet though. It all feels a bit lonely. 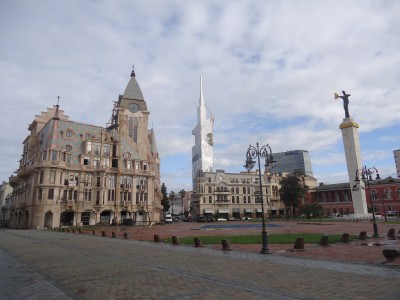 This is a really cool looking building. Striking, odd, bright and obvious on your walk down to the harbour. Plus – it’s theatre and we all know that the Georgians can put on a decent show. 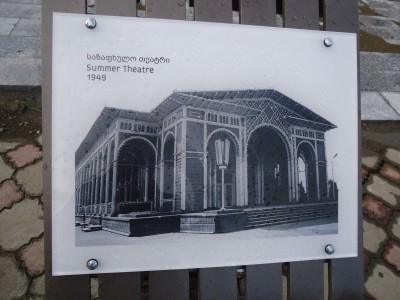 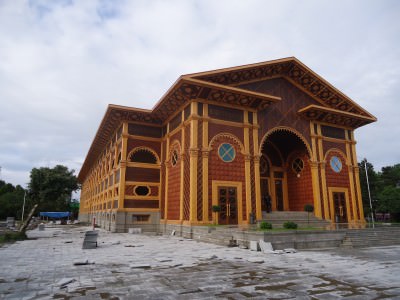 Truly, truly one of the nicest meals EVER from my travels – you just have to try Adjarian Khachapuri when you are in Batumi. It is the region’s special dish. Basically bread with cheese and butter inside, with an egg that cooks in the middle and melts as you eat it. The signature dish also includes ham. I went to the cool Laguna Restaurant to try it. It was simply delicious and it made my Friday’s Featured Food series of course. 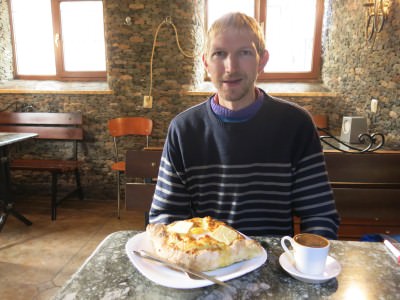 Georgians are proud of their art. It’s not my thing really but yes a cracking display of art here as well as some statues and a park outside. 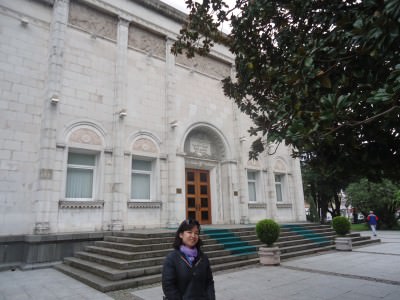 Bulvari just means Boulevard in Georgian so as you’ll have guessed this is a good place to stroll along beachside. 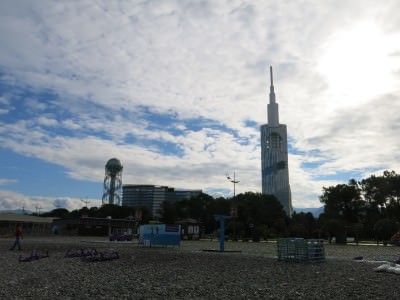 Bulvari Batumi – stroll along the seafront.

For some reason Batumi has all these crazy striking and elaborate buildings. I couldn’t quite get my head round it. This tourist resort is almost like a wannabe Singapore without the poshness of it all. The Alphabet Tower is just one of many state of the art funky buildings in Batumi’s skyline. There’s a restaurant at the top to dine with good views of the city and Black Sea. 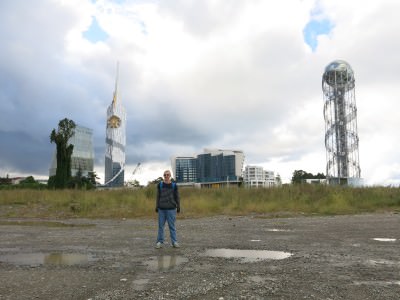 Funky buildings in Batumi – Alphabet Tower on the right here.

This sexy couple are standing by the Black Sea and make an obvious photo opportunity. Go there at night to see them lit up. Ali and Nino first featured in a novel. 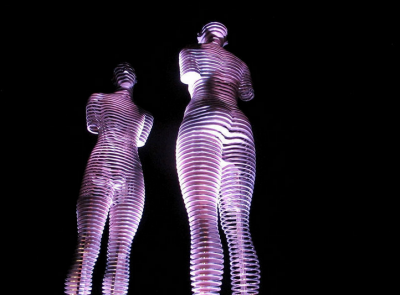 The statues of love in Batumi – Ali and Nino.

There are some other things to do in Batumi that are also cool and I have mentioned them on here, I loved the architecture in Batumi, even the library is a cool looking building. 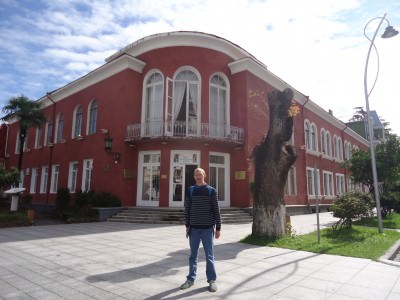 So take my advice if you head to Batumi and don’t just use it as a stop over or a visa place – there’s a lot to see and do in the city itself.
Here are my backpacking in Batumi videos:

7 thoughts on “Backpacking in Batumi, Georgia: 10 Cool Things to Check Out”