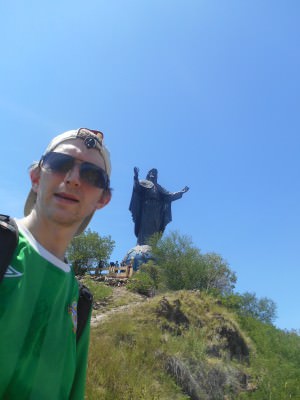 At the Jesus Statue in Cape Fatucama, East Timor

East Timor is 98% Catholic and you’ll be aware of that especially in Dili. One of the key sights to see in the entire country is the massive Jesus Statue at Cape Fatucama. Known locally as the Cristo Rei. Really one of those sights not to miss when backpacking in East Timor. 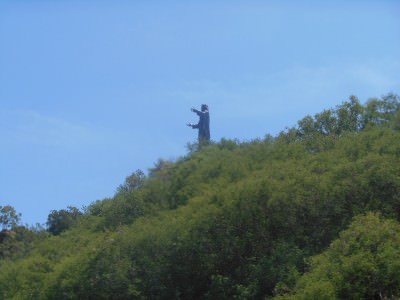 The Jesus Statue, Cristo Rei on the edge of Dili, East Timor.

What is the Jesus Statue at Cape Fatucama?
It’s a massive statue of Jesus Christ on top of a globe, which sits on the top of the peak at Cape Fatucama. It’s a popular spot for the locals given that this is a strongly Catholic country and they are proud of this Jesus monument, which was unveiled in 1996. This is before East Timor even became a country (2002) and was actually a gift from the Indonesians. At the time, East Timor was a Catholic state within mostly Muslim Indonesia. 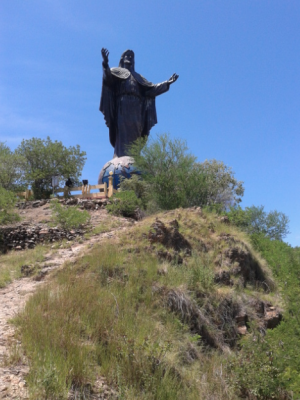 This Jesus Statue is actually believed to be the fifth biggest in the world, with the famous one in Rio being number one and a few others in places like Spain and Colombia. Cape Fatucama is a mini-peninsula about 7 kilometres east of Dili making it a half day trip if you really want – I took a bit longer as I did a lot of walking, but if you’re rushed half a day will suffice easily. 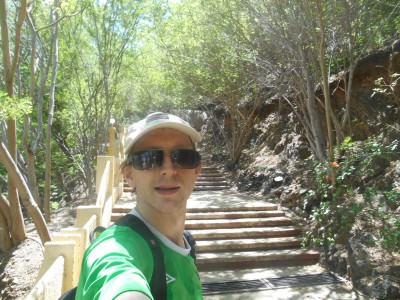 On the walk up to the Jesus Statue in East Timor.

How to get to the Jesus Statue at Cape Fatucama

To get out to the Jesus Statue at Cape Fatucama, you have three main options:

1. Walk it. This sounds like the best and easiest option but having walked part of the way there and all of the way back, I have to admit that it was a sweaty experience. I was dripping with sweat on the way back! The only thing of benefit was I saved money and I also got to meet a load of locals and go in for a swim. Plus I stopped off at the Caz Bar on the way back – it’s on the route.

2. Hire a Motorbike. This can be an expensive thing to do but a lot of travellers to East Timor do it as it allows you to get out and see the country. But I met a few travellers that had a motorbike, this makes it easy to get to Cape Futacama and explore the rest of the country as public transport is not too easy to find, nor are the roads outside the capital of a decent quality.

3. Get a Taxi. This is the most expensive option, but in the hot weather it can be worth it especially in a group. 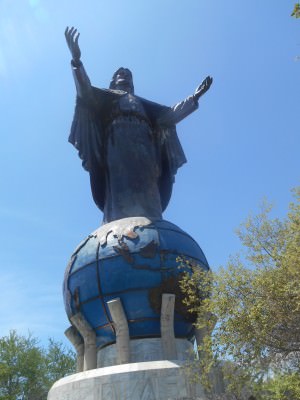 However while those are the 3 main options, I actually mixed things up a bit and went there and back this way:

1. I got a Mikrolet from the East Timor Backpackers Hostel out to Lita on the east of Dili. This is the furthest a Mikrolet will go on that road, and therefore the closest you can get to Cape Fatucama on public transport. Mikrolets are the easiest way to get around Dili, costing just 25 cents and they operate in daylight hours only. 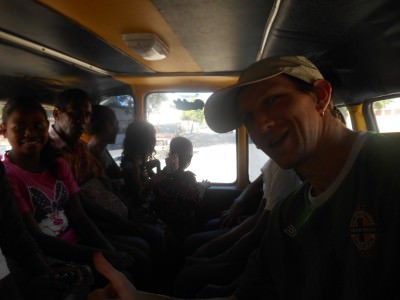 In a local microlet – they cost just 25 cents.

2. I walked for a bit along the coastal road before checking a few taxi prices. 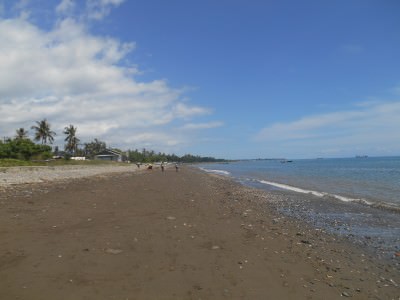 One of the beaches on my walk around the coast away from Dili.

3. Finally as I walked in the hot sun, I decided to get a taxi out there and walk it back. I bargained a taxi driver down but still had to pay $3 US. If you can get it for $1 – $2, take it!! The taxi driver left me off at the base of Cape Fatucama. The weirdest thing ever was he told me his name was also Jonny, not sure if he made that up to make me like him! 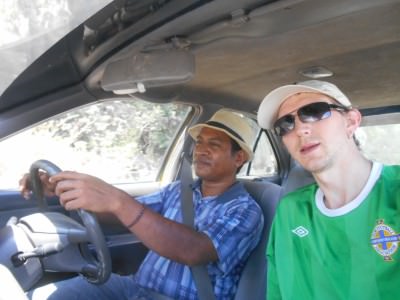 In the taxi with John,ny my taxi driver!

4. I walked back by myself and made sure I stopped off on route to check out the beaches, have a swim and stop for a drink in the Caz Bar (one of the top 6 bars in Dili). 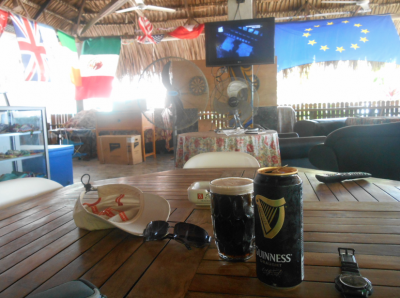 Having a Guinness in Caz Bar on the way back. 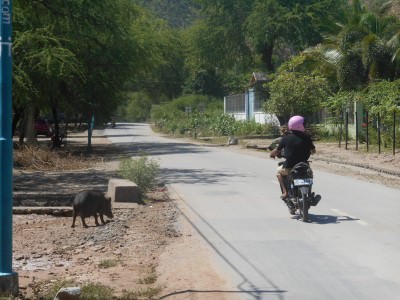 The road back from the Jesus Statue – a motorbike and a warthog!

When to go to the Jesus Statue at Cape Fatucama
Early morning or mid morning is best, but basically it never gets too busy so you’ll be fine. Going at mid-day is the worst time heat wise as East Timor is a hot beast and will burn you to the bone. The Jesus Statue is also lit up most nights, which is cool, but the views are to be seen in daylight hours of course. Some people like to watch the sunrise or sunset from here, which is also a great idea. 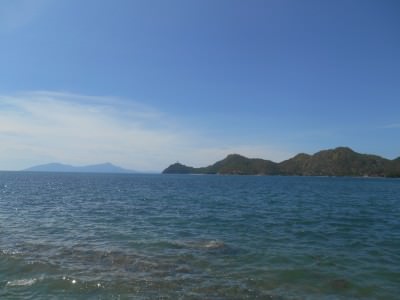 Morning view of the Jesus Statue on the walk round.

What to do at the Jesus Statue at Cape Fatucama
The Jesus Statue is at the top of the hill by the sea and there are steps up to the top. They are not clearly signposted but you will see others going up there. On the walk up, on the right hand side there are alcoves with Jesus moments in them, such as Jesus on the cross and Jesus at the last supper. 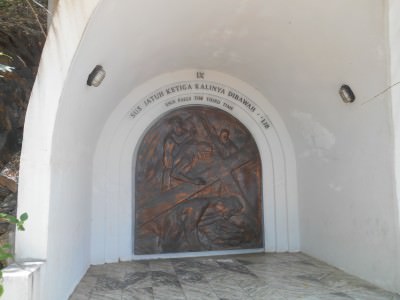 One of the alcoves on the walk up to the Jesus Statue.

Hardcore Catholics light candles and say prayers all the way up. Please remember and respect that for some this is a pilgrimage, it’s a holy place. Walking to the top should take between 15 – 20 minutes. Make sure you bring some water and suncream (oops I forgot to buy suncream on my trip until the day after!) but yeah water is essential as it’s an upward walk and this is a hot country. 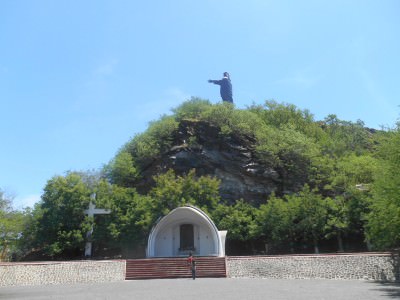 Almost at the top of the Jesus Statue in Cape Fatucama.

Once you get to the top you will be rewarded with tremendous views on both sides. To the west – back along the coast towards Dili (7km away) and to the east the Jesus backside beach and the northern coast of East Timor. 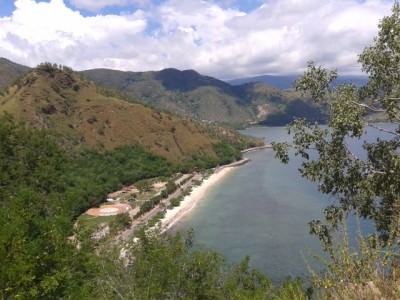 The view looking back towards Dili from the top. Amazing.

The Jesus Statue is of course completely free of charge. 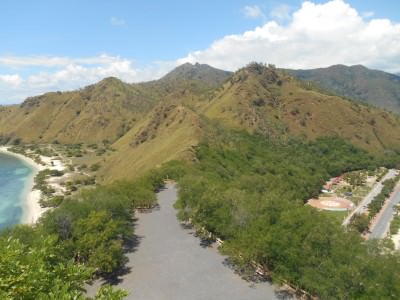 The view on the path up to the Jesus Statue looking both ways on Cape Fatucama.

Other Activities while visiting the Jesus Statue at Cape Fatucama.

1. Snorkelling.
Some people go snorkelling in the waters on the Jesus backside beach on the other side of the statue. 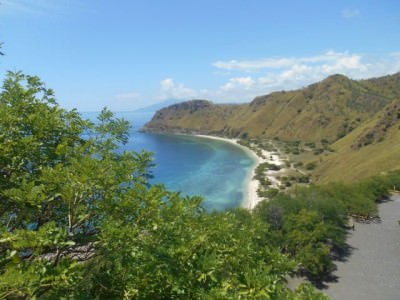 The Gorgeous Jesus Backside Beach on the other side of Cape Fatucama.

2. Swimming.
I also went in for a swim in the sea as I was so hot and the water here is refreshing. Some of the locals actually go in completely naked some of the time which is something I didn’t expect in a Catholic nation. 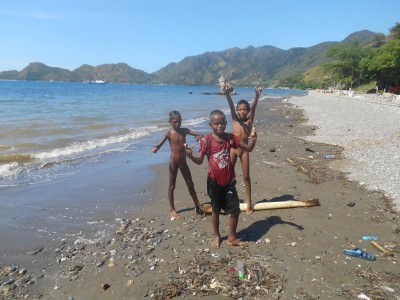 Some of the local kids on one of the beaches in Dili, East Timor.

I guess it’s the heat and the back to basics existence. Nudity is not frowned upon on the beaches here so I went into for a natural dip myself in the heat too. There are a lot of beaches to choose from on the walk to the Jesus Statue and back. They’re not the cleanest but the water is refreshing! 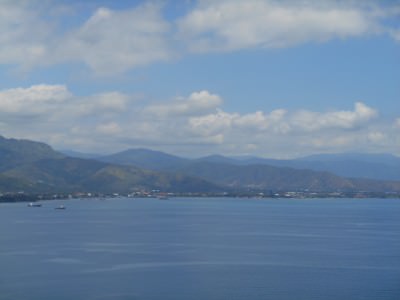 The hot waters in Dili, East Timor – perfect for a dip.

3. Fishing.
I met a few guys fishing off the coast, bring your stuff, open a beer and relax. Paradise! 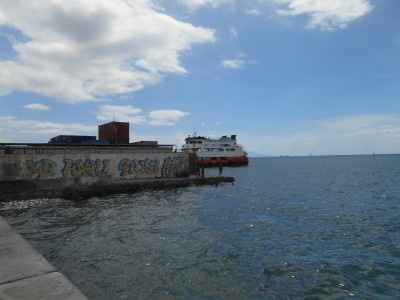 Fishing off the coast of Dili, East Timor.

4. Walking/Hiking.
Despite the heat I did some extra walking and hiking round the area. I headed round the rocks at the base of the Statue and also to the tip of Cape Fatucama. It’s worth chilling out on. 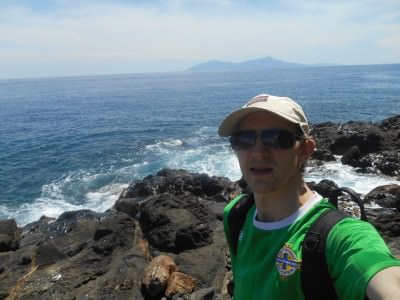 Out on the rocks at Cape Fatucama, below the Jesus Statue.

5. Meeting the locals
I met a load of local folk on the way there and back, including a group of guys who gave me bananas and Coke and wouldn’t take money for it. I gace them some anyway and sat and chatted. 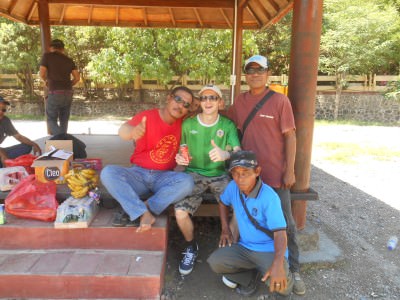 Meeting the locals at Cape Fatucama.

So once you’ve got your East Timor visa and checked into the East Timor backpackers, this is one of the top spots to see when you’re based in Dili. The East Timor Lonely Planet is worth checking out. Here are my videos from visiting the Jesus Statue while backpacking in East Timor get it on your list:

4 thoughts on “Backpacking in East Timor: Visiting the Jesus Statue at Cape Fatucama”