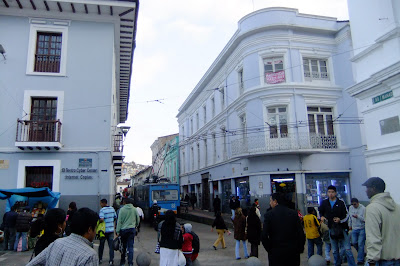 Backpacking in Ecuador: Quito Playing Games With My Heart

I am forever grateful to the wonderful people we meet when we travel. On arrival in Quito, I met Erin, from the USA. Erin works at Colonial House Hostel and has lived in Quito for a while. I ask her where the best places to go are on my first afternoon and evening in the Old Town. 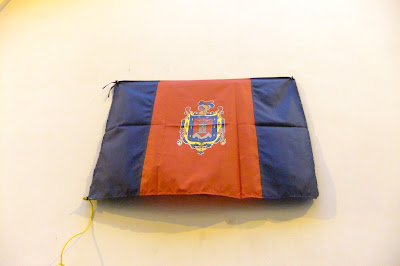 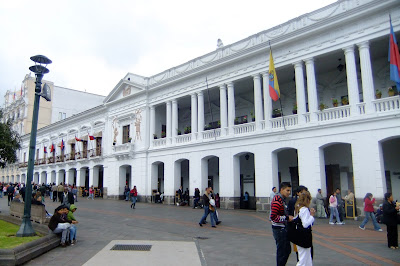 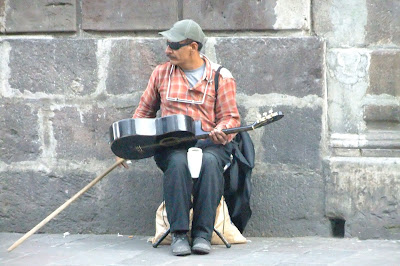 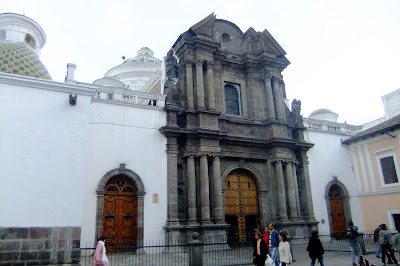 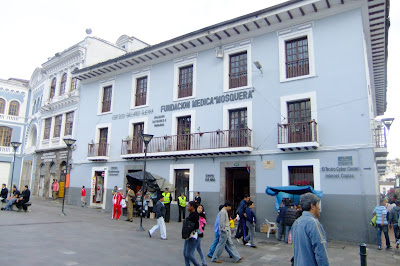 She willingly agrees to take me on a tour of the Old Town. Very kind of her and we leave the hostel around 4pm as I recall. We stay at Colonial House Hostel on Olmeda in an area you could call Itchimbia, a calm stroll north through some rough and rugged streets takes us to Estacion Marin Central, which would become my regular bus station for 3 days. We passed by quickly and saw the Plaza del Teatro.

It wasn’t reminding me of anywhere I’d ever been before. I noticed how there were very few tourists, save for the 3 Swedes from our hostel we met walking down – sadly one of them had been pick pocketed earlier that day – a hint to keep a look out on these crowded unknown streets.

There were no mobile phones or cameras about. Once we got to Plaza Grande it was obvious that I was the only real tourist there. It was the only capital city in South America where I didn’t see many tourists about (even in Suriname’s Paramaribo, down by the river and at Independence Square a number of Dutch tourists could be spotted). Quito was surprising. I really enjoyed it.

The Old Town feels like a pretty rough part of Spain that had expanded in a valley with hills around it. The Plaza Grande was the main square and there we saw the San Augustin Church, a posh Hotel and the Presidencial Palace. The buildings of Quito are enchanting. Palacio Arzobispal has an indoor run of restaurants, all looking Hungarian in appeal, yet Paraguayan in cost. Cheap and cheerful cuisine and strong drinks can be bought in this pretty indoor food lair.

Erin being of local knowledge could describe the buildings to me and add in some stories of significance.

ON Garcia Moreno on the other side of this square, the Cathedral is more a centrepiece than the palace. La Compania is the name for it I believe and a busker busking outside is nicknamed “Stevie Wonder”, not only is he blind, but he strums to his heart’s content all day long whether anyone cares or not…

The Cathedral is mammoth, white and pretty. A story is told to me by Erin about Garcia Moreno, who apparently was shot and keeled over to die outside the Cathedral itself. Slightly more dramatic, if a bit less sympathetic than Mark Chapman’s shooting of John Lennon 31 years ago…I’m a fan of Quito Cathedral.

Opposite it sits the library – all books in Spanish of course but an intrigue awaits. “Come inside” murmurs the enthusiastic and pretty Erin as she takes me up some storeys in the library. “In Northern Ireland” you need to be a member to do this. Here, it’s a wee local secret – a nice free view of the city from the top floor of the library. I enjoy it. I pose with my Northern Ireland flag and stare down at the typical square of people.

Its not yet sunset and I also gaze up into the hills where a white figure statue stares down on a city she thinks she owns. She may not, but this is a proud Catholic region. The winged virgin monument.

The Square from the library.

The top of the Cathedral. 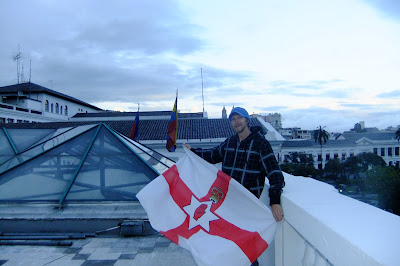 The silver bird out of town…

I felt sad for the locals in some parts of South America – most notably in Uruguay and Paraguay (but here – not for a moment in Buenos Aires or indeed Caracas). Here a pictorial proof of life collecting rubbish in the city. Let’s not be too sad – at least they keep their city clean and the people have a job.

The winged Virgin also looks down on another square which is impressive. 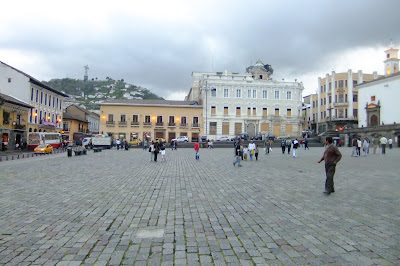 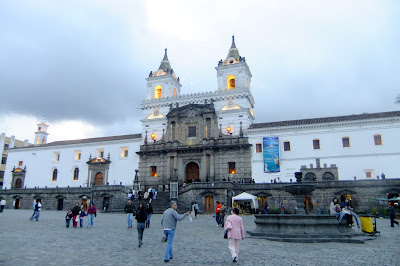 This is a Catholic Monastery.

So It’s time for a (n often Protestant associated, for whatever reason) flag opportunity. Quito hasn’t slept yet.

A local shop near the square sells face masks, one of even Barack Obama.

It would be easy to make this part a separate post – but I’m behind as it is with posting on here, so let’s include in the post on Quito’s Old Town – the oldest street and dristrict in Quito. Calle de la Ronda as it’s known was where it all began high up in this deep metropolis.

Erin is an excellent guide and Quito oozes something which other cities in South America just can’t. I’ll try to explain what it oozes…and that is an appeal of its own influence. These people are from Quito, this city is Quito. This is local and real and they like life here. If I contrast with the following cities I’ve been to, this is the difference:
Venice, Italy – has appeal but far too many tourists
Buenos Aires, Argentina – too caught up in its own ego to understand the real beauty within
Asuncion, Paraguay – way too shy to even bother promoting itself as “the centre of South America” (an accolade which by the ways it merits and could hold)
Sydney, Australia – far too universal and multi cultured to see the real Australia. As a mate of mine once said “you don’t see any wallabies hopping around King’s Cross”)

Quito, I admit, you have it, and La Ronda, the oldest part of town gives and English cobbled street effect to a city which has probably never heard of Geoff Hurst or Dick Whittington.

Christmas in La Ronda. It’s clear for all to see.

A proud capital? You bet. Plenty of Ecuadorian flags line the streets. A football team which has made it to 2 recent World Cups.

Two local policemen stand on the corner. I found a safety in that.

I waited until a crowd passed and snapped this night time gem. How pretty the streets.

It was time to immerse ourselves in the Quito equivalent to “pub culture” this was another memory to ponder.

I try a Canelazo drink, made from sweet sugar cane. It comes in many flavours and gets local people legless apparently. I afforded myself just one – choosing Naranjilla flavour – sort of mandarin in taste but I’m told it includes sugar, rum, cinnamon, lemon). It was excellent. And the pub “snack” of choice in Quito is the empanada – or at least the Ecuadorian equivalent.

Art is prominent in Quito – much more so than in La Paz or Bogota. Inside these “pubs” there are many paintings. Some by Giuayasamin, one of Erin’s favourite artists.

Here a local rock band come in and play some gems.

The ONLY photo I ever got with Erin. Lovely girl and I thank her a lot for her tour.

After food and drink (I could have stayed there and drank much more – I enjoyed it!), it was time for a walk past another square – Plaza Santo Domingo.

And the local police on duty.

A statue in the square.

Our tour seems never ending as Erin takes us along Guayaquil Street (the forename is of course the largest city in Ecuador), where her friend works. I meet Alex and some of his family – they own an Ecuadorian restaurant. While we chatted I took a photo of 2 local delicacies – Llapingachos and Encebollados.

We stop at Tiu next – the local “spar” type shop! I buy some sweets, biscuits, crisps and chocolate, having a sweet tooth in fact for almost all of my time in Ecuador. That’s what I bought…

There’s the local beer – but just a dollar a big bottle in the hostel so no need.

Ecuadorian Dollars – similar to US dollars because they are the same!

IN the shell of a nut – that is Quito’s Old Town – yes OK I just skimmed it and may have missed out La Basilica and Ichimbia but it’s a great city.

Transport Used – this a walking tour only

TOP OF THE LIBRARY:

HAVING A CANELAZO IN QUITO:

1 thought on “Backpacking in Ecuador: Quito Playing Games With My Heart”