“My life is my message” – Mahatma Gandhi. 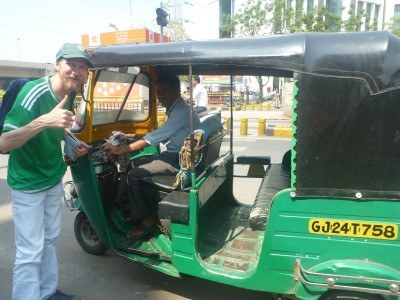 When you backpack your way to the “dry state” of Gujarat in India, your world may never be the same again. Ahmedabad (the former capital of Gujarat) is far and away the most chaotic city I have ever been to. I thought Chiayi, Xinying, Jakarta and Mexico City took the biscuit. You can keep them in the biscuit tin once you’ve dragged your backpack onto the streets of Ahmedabad. The crazy traffic, the ridiculous “tuk tuk hotel policy”, Gandhi’s museum and the option of “a night on the rip without leaving your hotel room”! How crazy is that?! Seriously mate, this is ridiculous. All dreadfully over inspiring for any backpacker, new or old. Northern Irish, Taiwanese or Adammian. 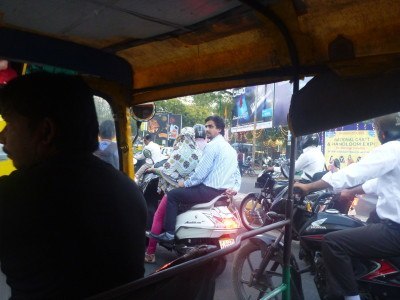 At its best, Ahmedabad will sweep you off your feet amid a flurry of beeping horns, street side tea vendors and more smoke than a Chinese factory. At its worst, you can always chill out in your hotel room and forget the madness. 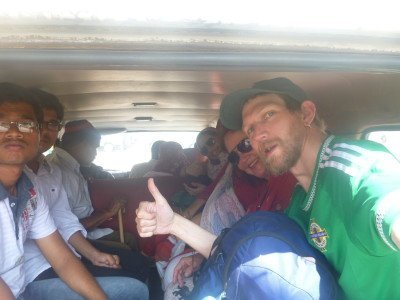 In a “shared truck” in Ahmedabad, India

You better hold on tight for a bumpy ride. Amongst the chaos, the city tries to endear you with its gems, somehow. On my departure from Ahmedabad, I was sure I’d miss this city, mostly for its craziness. I said my goodbyes to the delightful staff at the Hotel Formule One  Ahmedabad and it was on with the show. Not before I’d swallowed these six sights into my backpack, with a flourish. Shout out to Katia, my backpacking buddy from Brazil who toured these sights with me – it was pure epic!So take advantage of lastminute.com voucher codes and head to Gujarat’s capital! 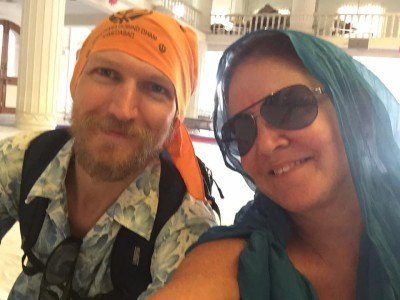 Katia and I backpack our way through Ahmedabad 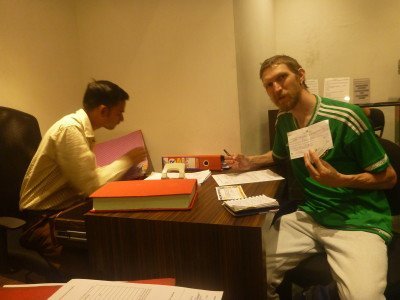 Getting my alcohol permit in Ahmedabad, Gujarat.

1.Sabarmati Ashram (Gandhi Museum)
Without a shadow, this remains a highlight from my time in India. In case you forgot, Mahatma Gandhi came from Gujarat State and it was here in Ahmedabad that he once lived. You can see his house, and go inside, for free. (Donations welcomed). 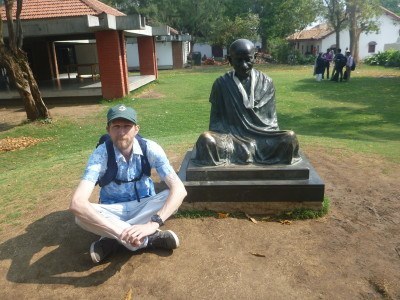 A truly amazing museum now sits at the complex known as Sabarmati Ashram. Read up on Gandhi, get your fix of quotes, pose with him, feel spiritually enlightened and take a selfie in his kitchen. It’s all so rock’n’roll. It’s all so important to Indians, and to British. Why should this country have been stolen? It’s India, it’s not England. Gandhi’s the man. 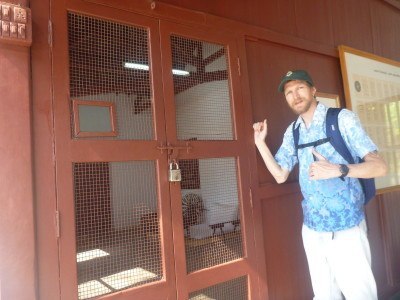 This is nothing short of a backpackers paradise. Make sure you get a tour to Gandhi’s Museum here, check out his house and visit the peaceful exhibition centre where you can practice yoga and draw with children. 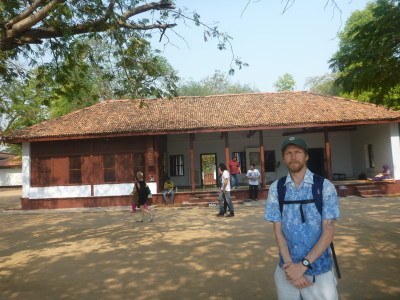 We met a load of locals here too. 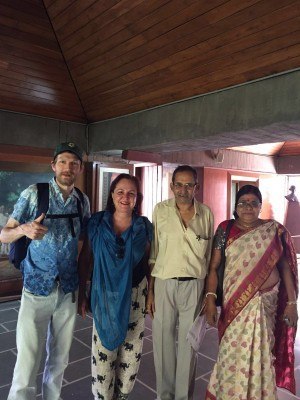 Katia and I meet locals in Ahmedabad

2.Bhadrakali Temple
Situated downtown not far from the train station, Bhadrakali Temple is worth a visit. You’ll have to meander your way through busy markets. Be aware that it doesn’t look as picture perfect in real life as in photos. 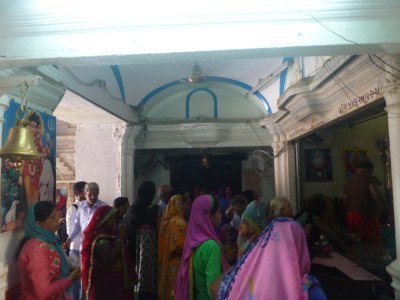 Do the pilgrimage with the locals and ring the bell. The huge arches and clock next to it hint at Portuguese or British architecture. This thought will pass you by as another scooter dodges a sugar salesman and a dog licks his balls in the morning sun. It wouldn’t be the same Ahmedabad if none of that crazy shit happened! Don’t even think about getting a map of the city. You’ll get lost! 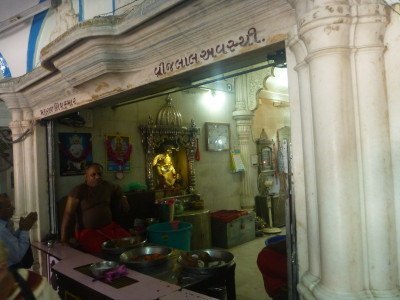 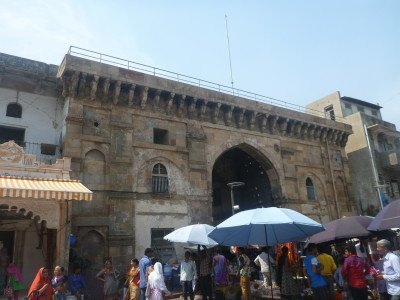 3.Iskcon Temple
A handy stop off place is Iskcon Temple. It’s a Hindu Temple on a busy junction onroute to Adalaj Vav. The music inside is all that Hare Krishna stuff. It’s all a tad spiritual and releasing. 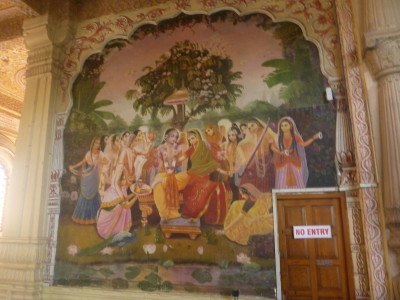 Inside the temple features colourful wall art and statues. Outside, a cheap backpacker from Ulster tops up his water bottle for free in the trustable water tanks. 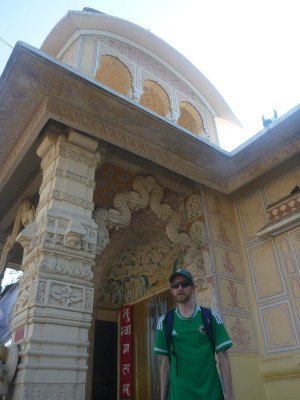 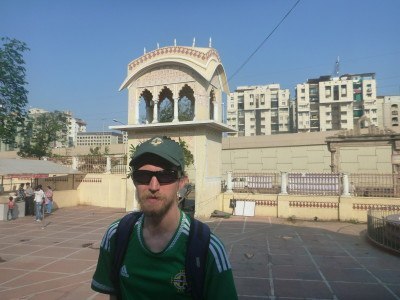 4.Street Markets
Trust me, it’s insane. Head to the street markets, sample some local bites (be careful what you choose) and listen to the sounds of a city that runs on 100 miles an hour spirit. Watch your step as you walk through the markets. My journey is almost 800 cities deep now, and Ahmedabad is by far the craziest city I’ve ever been to. 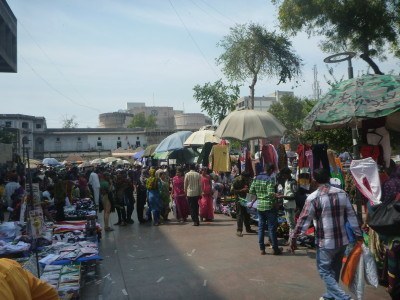 Chaos in markets of Ahmedabad 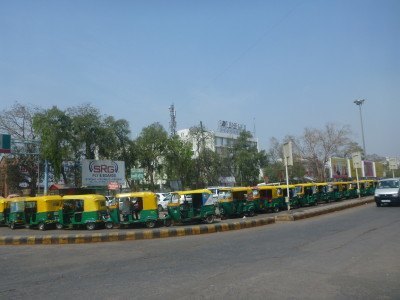 5.The Grand Bhagwati Hotel (for your alcohol permit)
So this is what you booze hounds all want to know. Where can you buy alcohol? Is it easy to get a permit? How much is a pint? What’s a night on the sauce like a few hundred kilometres from the Pakistan border? 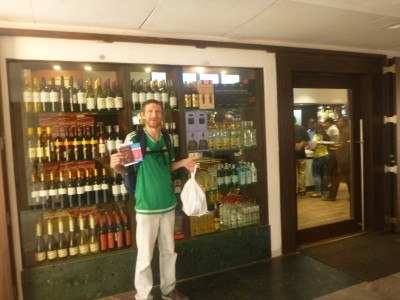 Getting my permit and my carryout in Gujarat State 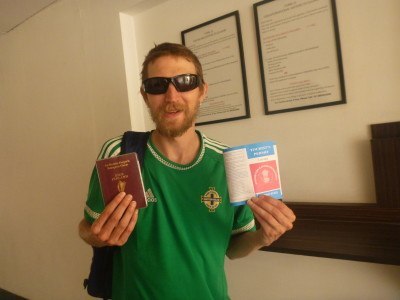 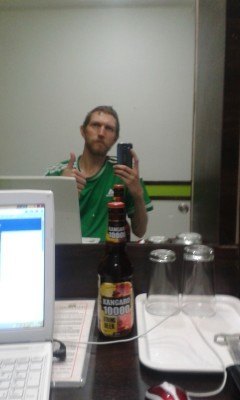 Drinking Kangaro 10,000 in my hotel room 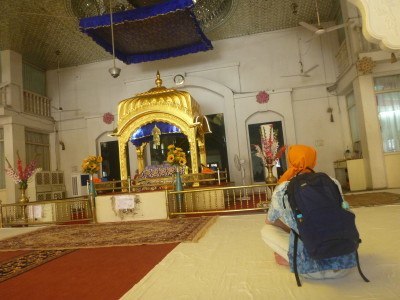 It’s on a busy corner junction and on a hot day, the calm, peace and fresh air inside was such a release from the tension of the manic street (without preachers) outside. 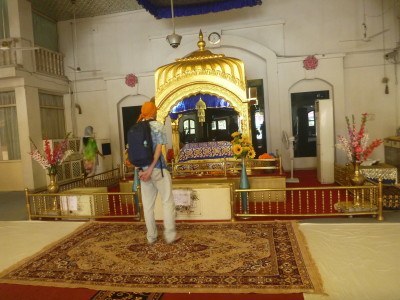 At one with the Goddess: Gurudwara Gobinddhan

“We all come from the Goddess” – Moving breath. 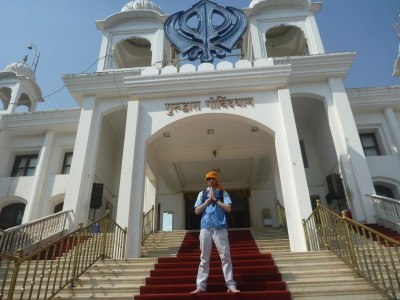 There are so many more things to see and do, but for myself and Katia my travel buddy, two days were all we spared for the city. We did however do a side trip to Adalaj Vav, which is near Gandhinagar in the north. It was nice to escape the madness for Hippy Goa, I must admit. Though a part of my heart beats out to the manic magic of Ahmedabad and its un-backpacked gems, of here just six easy ones for you. This is my journey, tell me yours. 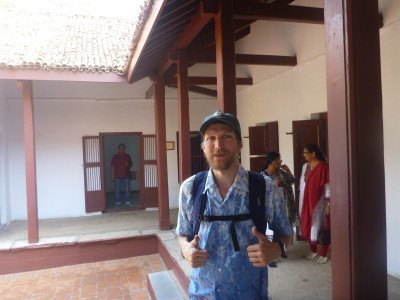 Yes it’s chaotic and wildly frustrating at times but you know, I loved my time in Ahmedabad and encourage you all to get this city on your Indian itinerary for sure. I particularly buzzed at the Alcohol Permit application and was moved by Gandhi’s tribute here. Despite the madness, the city breathes a smoky air of peace. 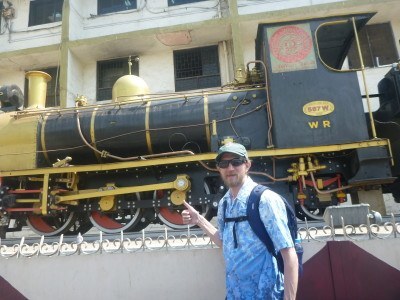 Here are some of my videos from backpacking in Ahmedabad:

(to be uploaded when I can)