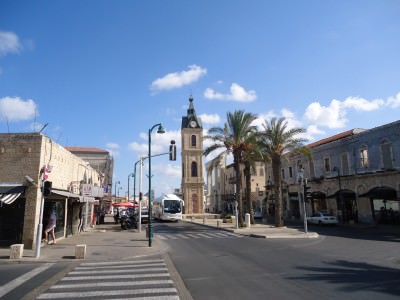 Backpacking in Jaffa Israel – my top 10.

Jaffa sits on the Mediterranean Sea on Israel’s west coast and it’s a city in its own right, despite the fact that these days Jaffa and Tel Aviv pretty much sit side by side and blur into one. Jaffa is one of the oldest settlements around and has been ruled by Turks, Egyptians and Jews in its charmed history. For this reason, history buffs will love Jaffa for its stories, dating back to the Egyptian times, the Roman times and even Napoleon’s conquests. Here’s an easy top 10 for you – all can be done by walking. Even better, there’s a FREE Walking Tour every day from 10 am, which starts at the Clock Tower, perfect way to go cheap backpacking in Jaffa. Yes, I got on it when I hit Israel. 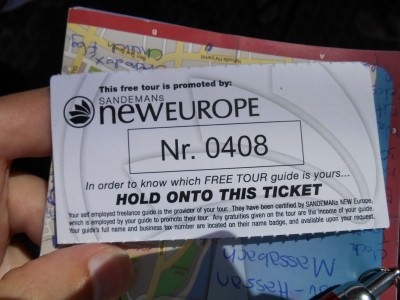 This is one of a hundred clock towers erected during the Ottoman Empire in the year 1900, apparently. Locals believe a Jaffa salesman who owned a watch and used to be asked daily “what time is it?” got fed up of the questions and requested the tower to be built so everyone knew what time it was. It’s a good place to start your walk and helps you to get your bearings. In fact I’d almost say it’s the centre piece of Jaffa. 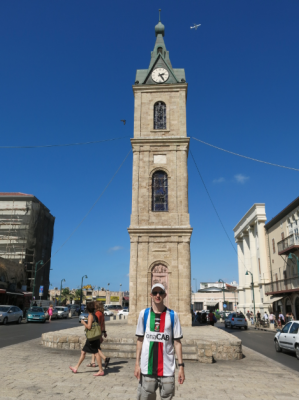 Backpacking in Jaffa – the Clock Tower

The Saraya is a Turkish government building which sits in the area near the Clock Tower. A soap factory was also in operation here. 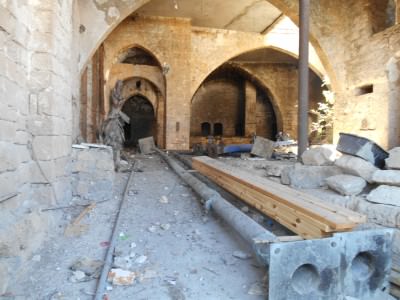 While you might assume this is “just another Catholic Church”, there’s a bit more to it than that. While all Catholic churches normally face east, this one doesn’t. This one points directly to the Vatican in Rome. Here at St. Peter’s Church is also the Vatican Embassy in Israel and an important holy place for Middle East based Catholics. 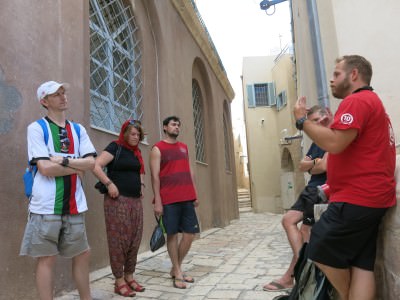 On the free tour of Jaffa in Israel.

4. The Rocks of Andromeda

These rocks by the sea are not just rocks, nor are they remains of an old city. These are the rocks of Andromeda. According to Greek mythology, Andromeda was the daughter of Cepheus and Cassiopeia (who were the King and Queen of Ethiopia). Cassiopeia claimed that her daughter was more beautiful than the daughters of Poseidon, the God of the Sea. This didn’t go down too well with Poseidon who decided to flood Ethiopia and send a monster. The monster didn’t get very far though and was turned to stone. So yeah, these rocks are a monster. Many ships have sunk off the coast near the rocks of Andromeda down the years. 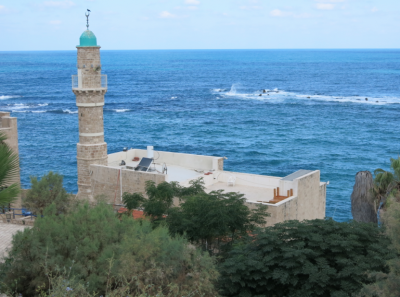 Backpacking in Jaffa – the rocks of Andromeda, just beyond the Mosque in this photo.

The Old City Gate still remains, and it was here that the Egyptians apparently invaded Jaffa, after several failed attempts, they finally asked for a “peace treaty” by sending camels and casks of wine to the people of Jaffa. When they got pissed, they invaded. The Old City Gate was closed nightly at 8pm to keep out attackers. The walls of the old city still remain for the most part and you can see how the new city has developed around them. 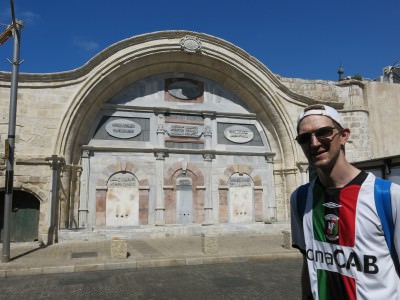 Old gates and walls of the city in Jaffa, Israel.

This is admittedly one to avoid for budget backpackers in terms of spending. Lunches and even fruit juice is dear here. However nothing wrong with a stroll around. Inside is also a bar which has over 50 types of Israeli Beer. I grabbed a free sample and got on my merry way. 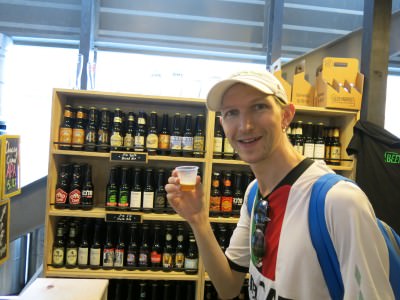 7. The House of Simon the Tanner

Again historical stories come to you when you see this house. A disputed place of worship where Catholics and Muslims both claim they were there first to use the House of Simon the Tanner for prayer. As a result and to ensure neither party wins, it’s been closed. You can stand outside the door though and read the plaques. 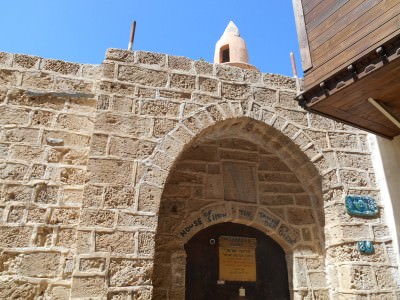 The House of Simon the Tanner.

OK so this is the building opposite the House of Simon the Tanner and probably its real name is not “the plague building” but that’s what I’m calling it. Ryan, our walking tour guide told us of the story how Napoleon came to invade and eventually killed the inhabitants of Jaffa, leaving their dead bodies to rot in this building. This caused a plague and even some of Napoleon’s own soldiers caught the disease. So he asked a Turkish doctor (an enemy of his) to poison them all, so he could move on. Napoleon and his army moved on to another town, and although they had won a battle here in Jaffa, it’s not recognised in Paris as a victory, nor has a street been named after Jaffa. It was a bittersweet victory for Napoleon, a place where he lost many of his own men. 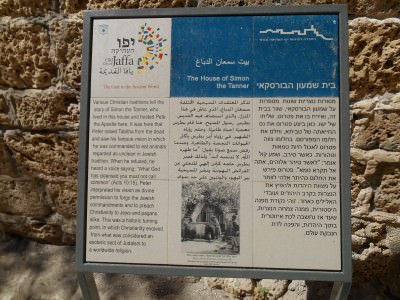 Information boards are all over Jaffa including this one at the House of Simon Tanner. They are written in Arabic, Hebrew and English.

One for the art buffs, the Ilana Goor Art Museum offers collections of hundreds of Israeli works of art, sitting alongside the work of Ilana Goor. It’s housed inside an 18th century building. 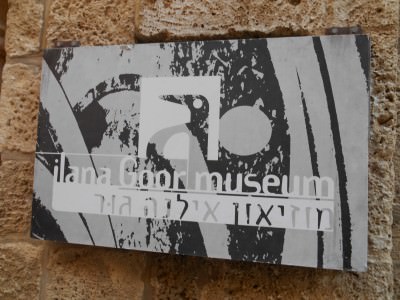 As a bonus there’s also some cool art out in the streets of Jaffa including a tree growing inside a hanging egg. 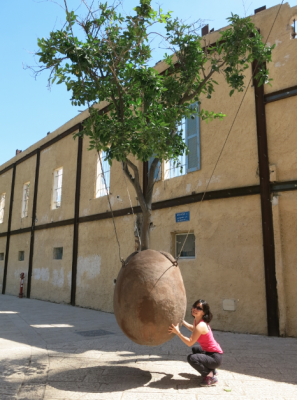 Backpacking in Jaffa – A tree in an egg shaped rock!

The Flea Market is a fantastic place to buy crafts, souvenirs and even food and drink. Antiques are sold here as are all sorts of locally made handicrafts. 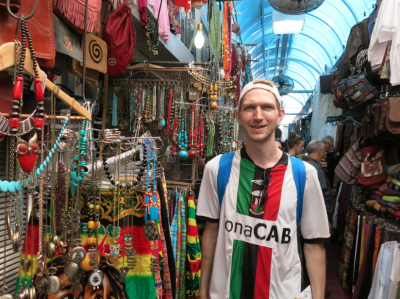 Takeaway places also sell pomegranate juice and falafel, two things very popular in Israel. So we got onto the bandwagon and opted for both. Cheap and cheerful here too. 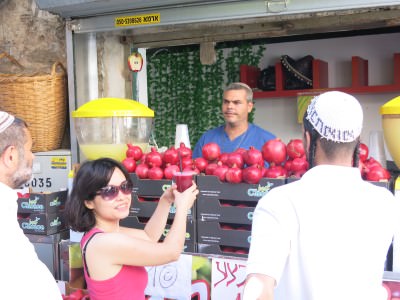 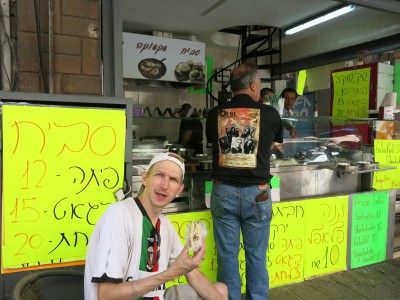 That should do your for starters – there’s a load more to see in Jaffa by the way, Mosques, old excavated ruins, keep up to date on the Tourist Israel Facebook Page. 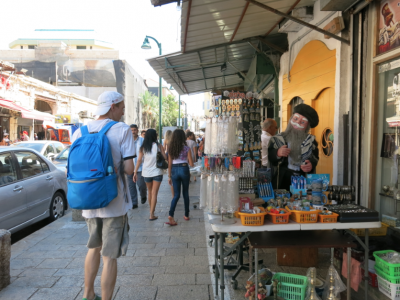 Backpacking in Jaffa – checking out the markets

Here are some of my videos from the experience of backpacking in Jaffa:

3 thoughts on “Backpacking in Jaffa, Israel: Top 10 Sights on a FREE Tour”