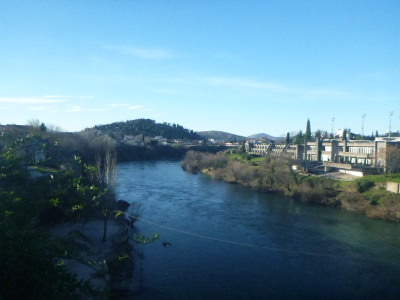 Montenegro’s capital city of Podgorica was my final stop on my recent Balkans and Eastern European adventure. I had heard that it was very much a capital city with “not a lot happening” (quote from other backpackers). This reason alone sold the place to me and I found a great cosy hotel for my final night in Montenegro – the Keto Hotel, a 3 star. I knew I could relax here, but I also knew that this backpacking passion of mine meant I wouldn’t be spending 24 hours in a hotel room, so it was out to see the city of Podgorica. 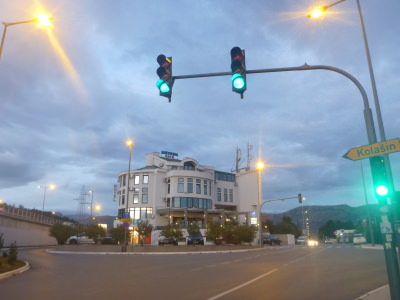 Hotel Keto in Podgorica, Montenegro – my base for backpacking round Poddy.

Podgorica was known as Titograd when I was young and it was only in 1992, when it took the name of Podgorica. The meaning of Podgorica is “under the small hill”. 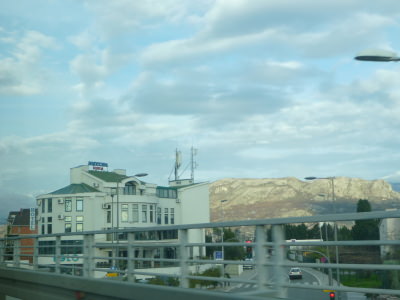 Podgorica, under the small hill.

As Montenegro is a country of less than a million people, and Podgorica houses less than 200,000, I’ll just do a quick fire top 8 from what I enjoyed here in Poddy. Yes, “Poddy” as I nicknamed it due to my fondness of it’s name and part failure to pronounce the city properly. Poddy holds enough fire power for a couple of nights on your Montenegrin adventure. 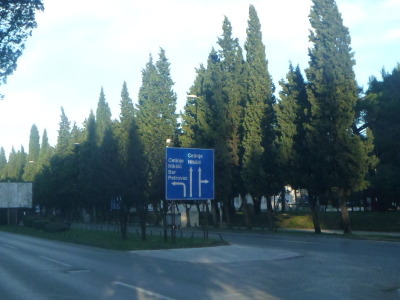 1. Most Milenjum (Millennium Bridge)
Lit up at night and dominating your daily walk through Poddy is the Most Milenjum. In fact, most of Podgorica’s bridges are cool to look at and to cross, but this is the popular one that catches your eye. 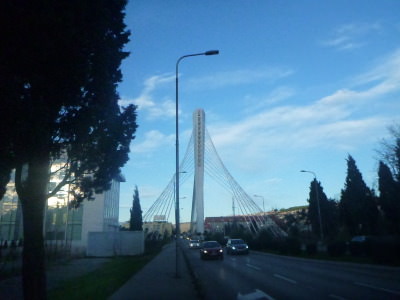 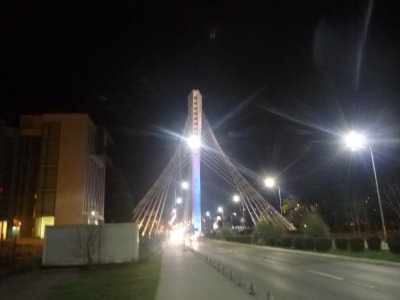 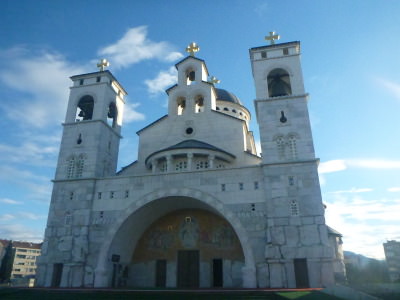 With drab buildings all around this is one to shoot out and inspire you. Check out the mosaics at the entrance to the church and go inside. It’s a cool church. 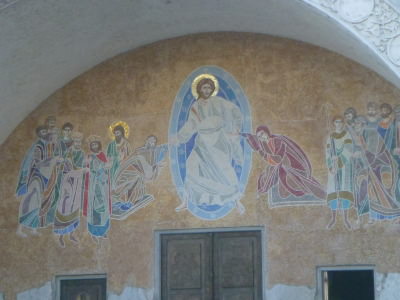 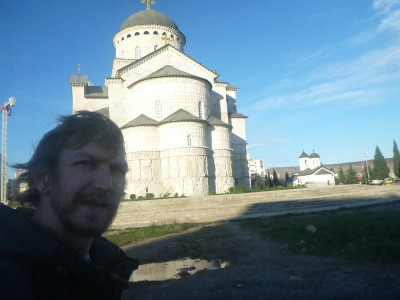 3. Gradski Stadion
Gradski Stadion is the national stadium and people from Montenegro will tell you how much they love football and how well they do for such a small nation. Dejan Savicevic hails from the city and played for AC Milan and in 2 World Cups. More recently the Montenegro national team have proudly drawn 3 times with England and beaten many big teams here in the capital city. 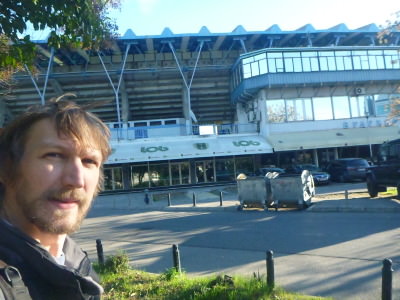 In fact even Northern Ireland succumbed to a 2-0 defeat here back in 2010. Ouch! 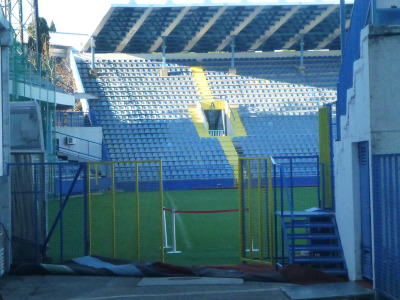 4. The Ottoman Clock Tower
Evidence of an older city than the spread out residential parts of Poddy can be found in the Clock Tower and some of the buildings nearby. 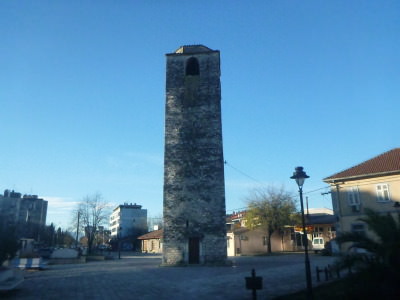 5. Old City Ruins/Turkish Town
Down by the river, these old city ruins are like part of an old Turkish town called “Stara Varoš” which includes the Ottoman Clock Tower and a few Mosques. The town is high above the river with narrow and curvy streets. Despite the cool sounding nature of this, it’s unlikely to keep you occupied for more than half an hour (I kid you not!). 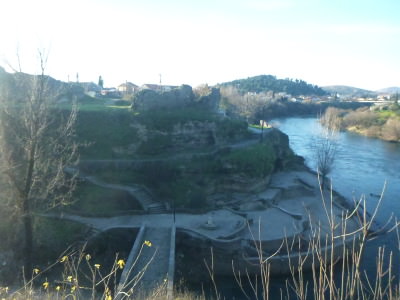 6. Trg Republike (Republic Square)
This square is one of Europe’s least busy main squares in a city that I have ever seen. Even Stepanakert and Tiraspol seem busy compared with Poddy’s Trg Republike. Don’t let that put you off – apparently locals like to mingle here in summer months. There’s a pretty fountain, some art and cafes nearby. 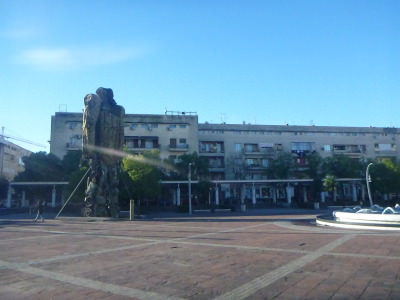 7. Random Robots
Modern art mixed with the local’s reluctance to waste materials have inspired what can only be classed as “Random Robots”. On completely deserted street corners these crazy robots made from tyres, scrap metal and car parts give a futuristic street art feel to Poddy in Monty. I loved it! 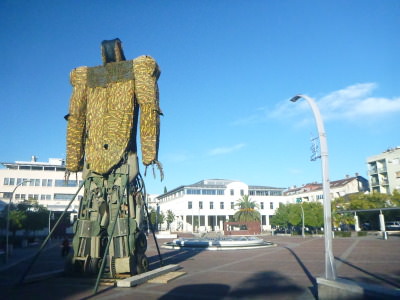 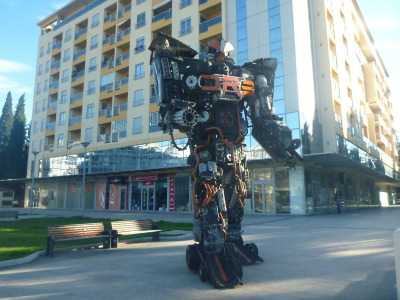 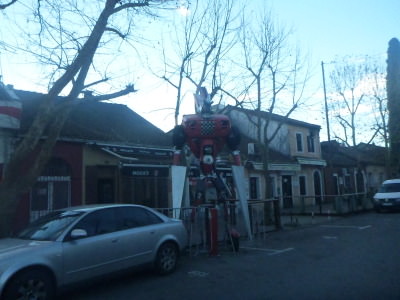 8. Osmanagic’s Mosque
Christianity meets Islam in non dynamic streets of Poddy. This Mosque, Osmanagic’s Mosque is probably the pick of the Mosques and yes it’s one of the things that you will see in the old town during your 30 minute visit to it. 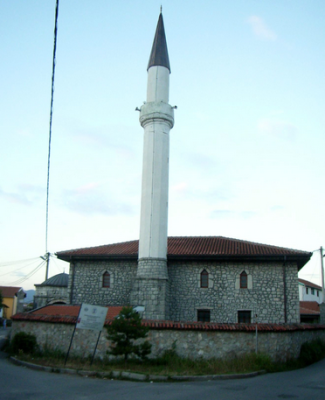 So pretty Poddy is actually a very quiet and unusual capital city if truth be told and despite signs pointing to the city centre and a few streets with commercial outlets, it’s not obvious where the CBD is, nor where the main sights are concentrated. 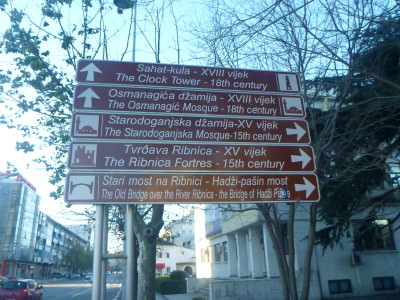 The sights of Podgorica condensed into one street sign.

You can walk all around the city to all these sights within an hour or two. Most tourists use Poddy as a pass through city and while this is true, I resorted to an early night in the Hotel Keto, and on my other trip through the city I hung out with two fellow travellers from South Korea in a town Casino, my party night in Poddy. 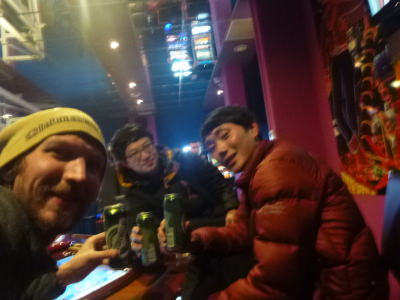 Hanging out in a Casino in Podgorica with the two South Korean lads – Ho and Justin.

There are some other cool things to check out by the way and I’ll mention them in passing as I personally didn’t visit them all but the Catholic Church, Delta City Shopping Mall, some factories, government and some statues. But really I got my personal fix from the 8 I’ve written about here and I liked the city – cool spot to chill out and I’m endeared to call it “Poddy”. 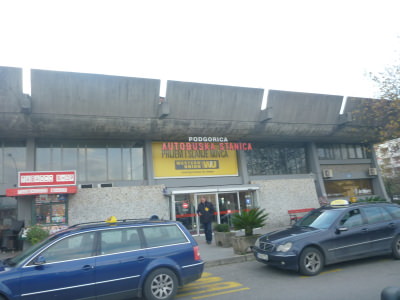 In terms of a place to chill out and not feel the need to be a hardcore backpacker for once, Podgorica is the best capital city I’ve been in for those purposes alone and that’s why a visit is something I’d recommend. Recharge your backpacking batteries, eat some pizza and drink tea with no apologies, for once. 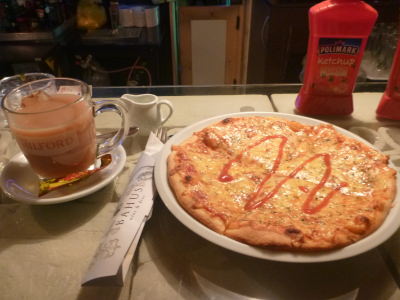 Tea and pizza in Podgorica, Montenegro.

Here are some videos from my time in Poddy while backpacking in Montenegro: