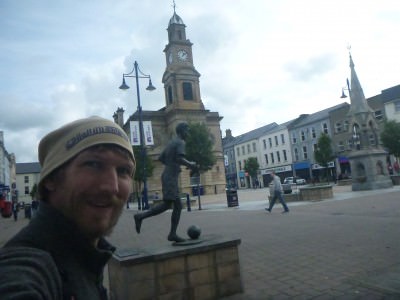 Northern Ireland is brimming with undiscovered towns like Coleraine. The locals know them. Travellers sadly pass in and out too quickly to get a grasp of what they offer. Ignore the fact that Coleraine is simply a transport hub for the tourist sights on the North Coast, give the town at least a day and you’ll be pleasantly surprised. 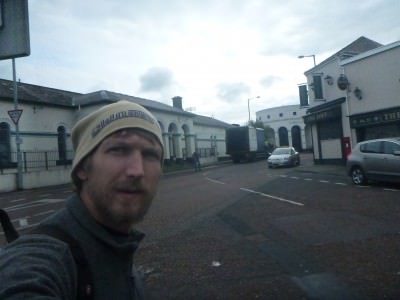 Getting to Coleraine
The best way to get to Coleraine if you’re backpacking it is by train. I headed on the train from Belfast. The same line goes the other way from Londonderry. 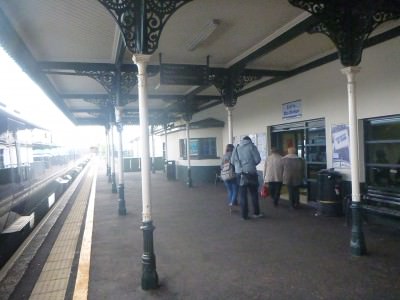 Arrival by train into Coleraine.

1. River Bann
Coleraine as a town straddles across the River Bann. There are plenty of Bannside walks to enjoy. 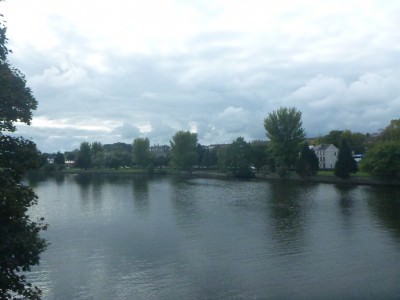 2. Town Hall
Northern Irish Town Halls differ from town to town, with one constant – they are all right in the centre of the CBD. In front sits a war memorial – again a typical statue stands tall bearing the names of those Colerainers that fought and died in the First and Second World Wars. 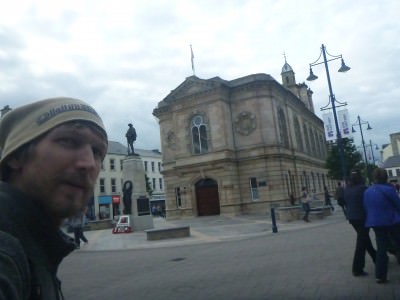 3. St Patricks Church
In Northern Ireland the Church plays a major part in society. Coleraine is mostly a Protestant town so you will see Presbyterians and Church of Irelands around the place. I’ve chosen the central St. Patrick’s Church here – it’s actually on Church Street near the town hall. 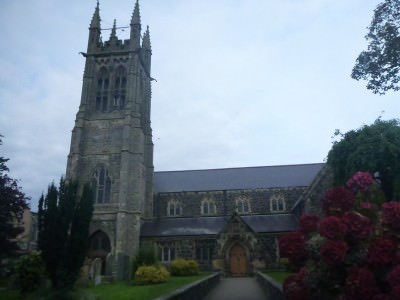 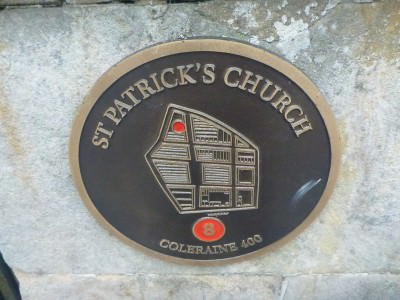 4. Bertie Peacock Statue
Football is the dominant sport in Northern Ireland (rugby and golf run it close these days) and right in the centre of Coleraine is a proud Bertie Peacock statue. 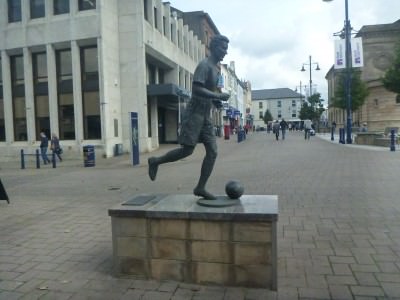 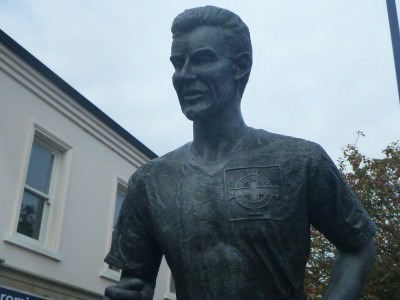 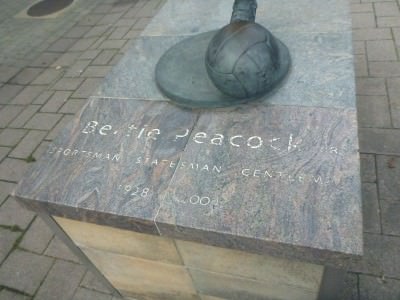 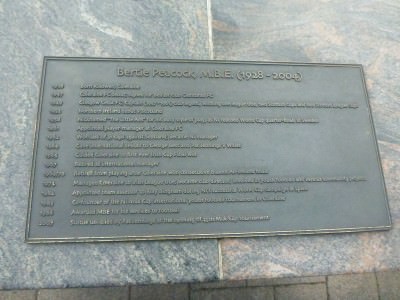 Honours of Coleraine football legend Bertie Peacock who died in 2004.

Bertie Peacock played for Northern Ireland in the 1958 World Cup side which reached the Quarter Finals.

5. Coleraine Showgrounds
If you get a chance to watch a live Irish League match at the Coleraine Showgrounds, do it. Coleraine won the Irish Cup in 2003, the League during the 70s and are one of the top 10 teams in Northern Ireland at the moment. The boxing day derbys are good craic – bring a coat and gloves though – it’s a cold winter here! 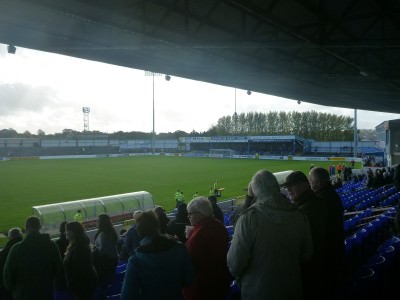 Coleraine Showgrounds, home of Coleraine FC in the Premier Division in Northern Ireland.

6. The Old Court House
There are a few buildings that have changed their purpose over the years. One of these is the Old Court House. It’s now a Wetherspoons pub with decent beers and food offers, inside the pub is some history on the courthouse and the building sits on a corner on a hill. 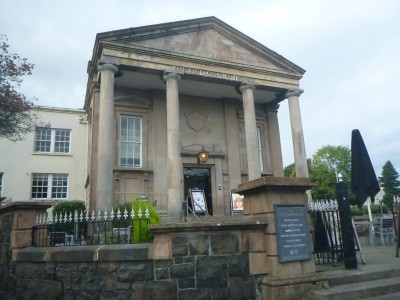 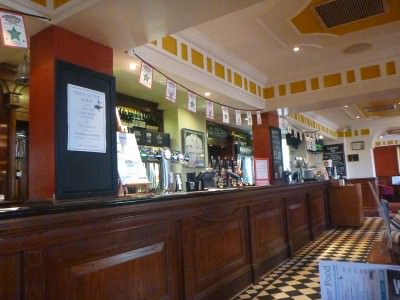 7. The Happy Haddock
The North Coast of Northern Ireland offers some great cuisine options. A good old fish n chips is well worth a try and the Happy Haddock is the oldest fish shop in town and they lead by example. 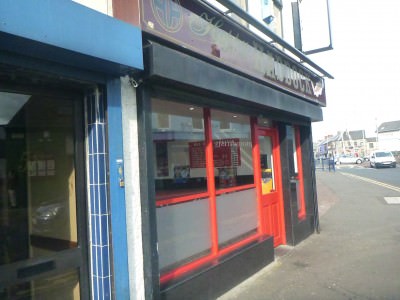 8. Church Street
Shopping wise, this is the pedestrian street through the town and worth a walk. As well as shops, cafes and the odd bar. 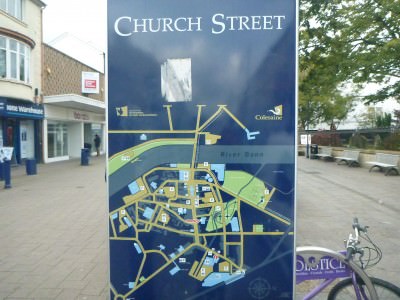 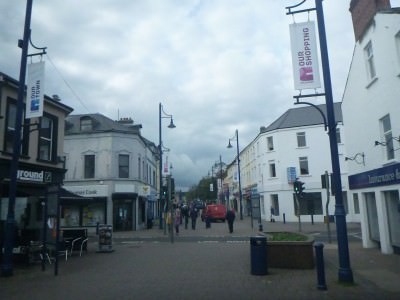 9. Anderson Park
A leafy park with paths, gardens and flowers which runs through parts of the town centre. 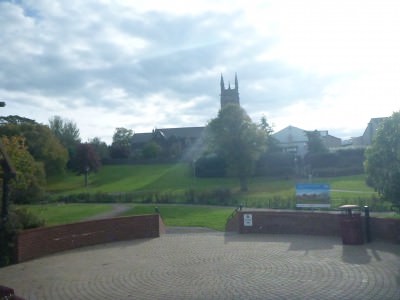 10. The Jet Centre
The Jet Centre is not just Coleraine’s best entertainment centre, it promises to be the best on the entire north coast. 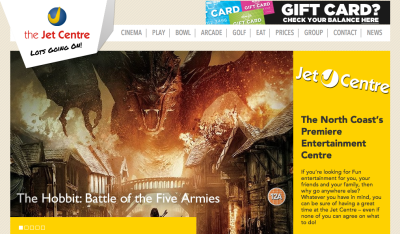 There’s also some great pubs and cafes plus the famous Moores department store. Coleraine is a chilled out town. 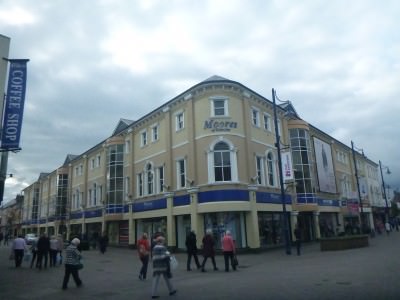 There is as yet no backpacker hostel in Coleraine, but a few bed and breakfasts and hotels in the nearby area, of which Glenleary Farm House looks like a good option.

If you want some better advice on Coleraine though, get in touch with Abbi Morrison who runs Life in a Rucksack and is an expert on Backpacking in Coleraine Northern Ireland. Here are a few videos from my time in Coleraine:

2 thoughts on “Backpacking in Northern Ireland: Top 10 Sights in Coleraine”