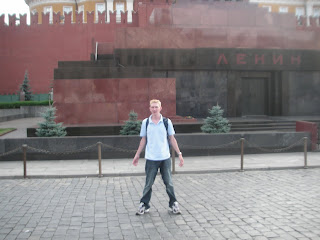 It is one of the most famous “squares” in the world and back in 2007, I was privileged enough to spend 4 days in Moscow as part of my whirlwind round the world trip. It all passed me by rather quickly. I stayed in Hostel Moscow and met loads of people there, I met people from Germany, Netherlands, South Africa, Russia, Australia, New Zealand and Republic of Ireland. The city itself is amazing, and perhaps you would need a week there to totally enjoy and witness everything. One of the main attractions was the world famous…Red Square. Initially I thought the name “Red Square” to be very odd, an English name to a square in Moscow?! I also believed it was so named due to the association with “red” and “bolshevik” and “communism”, mind you that was a totally wrong assumption. Even the edge of the square has red bricks, where the walls of the Kremlin start. However it is simply called “Red Square” because the Russian word красная (krasnaya) actually means both red and beautiful, and the Cathedral of Intercession (St. Basil’s Cathedral) in the main square is a beautiful building and this word was first used to describe it, and then to describe the square it overlooked. 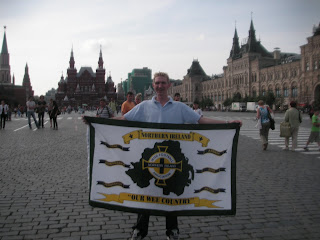 There is a lot of history in Moscow, and Russia as a whole. The whole communist ideal, the failed revolutions, the cold War, the era of Stalin and the recent history and falling of this “iron curtain” leaves Moscow as a somewhat historic and delicate prologue to an era and area where man worked for each other in relative peace. And a lot of this history can be diverted to the area known as “Red Square.” Indeed in its beautiful architecture, colour and originality St. Basil’s Cathedral stands obviously at the edge of the square. In honesty it is probably the nicest building I have ever seen. While in Moscow, I actually got a guided tour in English, and Yulia, the Russian tour guide was very good at explaining everything. Everyone was quite in awe of the Cathedral, and the tour (by bus) started on the other side of the square down a side street. 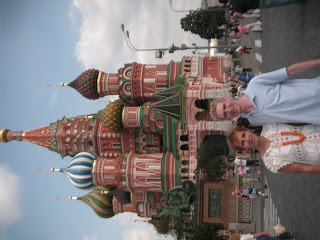 Enclosed, walled and containing many towers and fine architecture, is the Kremlin itself. This is the heart of Moscow and faces directly into the Red Square. A main star and clock face on the highest Kremlin building is the Spasskaya Tower, its one of 4 towers and is the ones that is most photographed and lies facing over Red Square. Inside the walls a lot of history went on. It actually dates back as far as 1156. That’s when the first Kremlin Wall was constructed. Through the years the Kremlin and the Square have seen a lot of changes. Two World Wars, at least two revolutions, communism, destroying of Nazi symbols post World War 2, introduction and removal of tram lines, and since the fall of communism, it has become a tourist hot spot. And even stranger… a venue for concerts! This included Paul McCartney and Red Hot Chili Peppers. 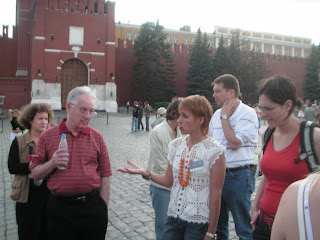 One of the defining bits for me however is the modern day “Mummy” or “dead alive corpse” that’s not in Egypt. That is the maintained dead body of revolutionary leader Lenin, Vladimir Ilyic Lenin inside his own mausoleum. It stands as a small red and black house on the edge of the Kremlin’s walls and is open for just 4 hours a day, just 5 days a week. This didn’t bode well for me, as I wanted to see Lenin! And as luck wouldn’t have it, I was there for four days. Arrived just after it closed on the first day, then endured the two days it was shut and on the last day I had to rush to the airport for an early flight so didn’t have time to queue to visit Lenin. A regret of mine perhaps, but it would just be to actually witness the frozen dead body, and the feeling of seeing such a interesting man in the flesh…anyhow I didn’t get the chance, so maybe I’ll be back someday. I got my photo taken outside Lenin’s Mausoleum anyhow as photos inside are quite obviously banned, as Russia is very strict on things ike that. 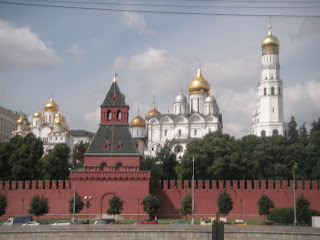 A thought this square in itself was worthy of its own post, I’d love to go back again and do a bit more detail on Moscow, perhaps even get a guided tour of the Kremlin and see Lenin himself. There are some rare random mentions to Lenin in the Manic Street Preachers album “The Holy Bible”, which was one of the things that had me wanting to go to Moscow. Those lyrics include awakening the dead – “Mr. Lenin awaken the boy” and a song called “Mausoleum.” I savoured the time in Red Square and was even chased by some Russians when simply getting a photo of me and my well travelled Northern Ireland flag in Red Square. Its a great place!