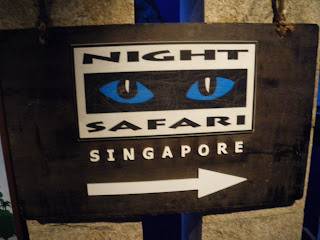 You’re thinking what the hell is “Night Safari”? But it’s obvious. The answer’s in the title. Singapore had the world’s first night safari. So while there and with one of the world’s most famous zoos so close, we couldn’t resist the temptation to do the “Night Safari” in Singapore. It would mean being up close and personal with all the jungle animals, no cages and no barriers, we would be safari-ing right past them in their natural habitat in the centre of the island and country of Singapore. 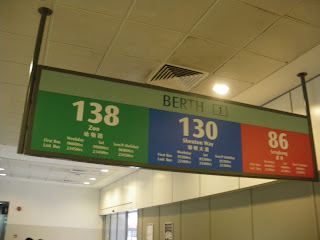 The zoo was a bit of a trek from the hostel and city centre. You couldn’t walk it. The best way to get there is get the underground (MRT) to Ang Mo Kio station on the red line. Get out there and there is a large Bus Interchange. The very last and final booth of the bus interchange, terminal 1 has Bus 138. That is the “ZOO BUS.” We boarded the bus at around 6 pm, the Night Safari begins at 7 pm, but all the places there are open all day (at the main Singapore Zoo) and there is some kind of promotion to be had if you do the Day Zoo and Night Safari. At any rate, a Zoo is a Zoo. Seen one, seen them all (the cynical side of me…). But NIght Safari is special. It is something new and exciting to try. It was a first for me and Natalja. From Mandai Lake Road, a lit up sign for Night Safari looked every bit as exciting as seeing animals not behind bars could be. 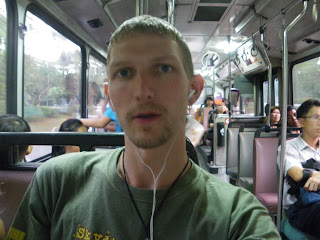 I was always aware of Singapore Zoo, but not the Night Safari. That was until we met Ricky from Bangor (in Tainan, Taiwan) and he recommended the Night Safari. An old work mate from my time working at the dreadful “Red Uneventful Cuisine” company was a Singaporean. Her name is Mya Than Da and we worked together quite a bit back in 2008. I sent her a message before I arrived in Singapore and she also recommended the Zoo at Singapore. So we were all set. 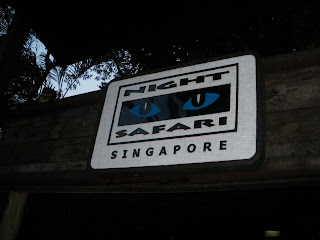 On arrival at Singapore Zoo, there were two clear ways to go – The Main Zoo, and the special….Night Safari. I had never done Safari of any type, here I was in Singapore in the darkness of a fake jungle going to see live elephants and giraffes. Years before I’d been to zoos and “animal places” such as Whipsnade Zoo (England, 1992), Artis Zoo (Netherlands, 1991) and even Belfast Zoo (Northern Ireland, the dreary 80s…). 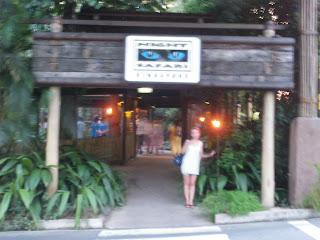 Once inside the Night Safari, we bought a ticket for the tram tour. A photo of a Clouded Leopard is the centre piece of my Night Safari ticket. NIGHT SAFARI – THE FIRST – THE ONLY it reads as its motto, we were entitled to tram stops 1 and 2 just, for the cost of 32 Singapore Dollars each. Thanks to Natalja skipping a queue, we managed to get into the last carriage of the 7.15 pm Night Safari Train Tour. We were right at the back, as we boarded the train or tram for the thrilling experience of Singapore Night Safari. The tram itself was like a massive tiger, painted in the colours but soon we couldn’t see it as the lit up section ended. Before the tram departed we had our photo taken and were given a ticket to collect of it. Theme Parks and popular Commercial Tourist places do this a lot, in Singapore we had that happen 3 times that day: On The Singapore Flyer, At The Fountain of Wealth, and here at Night Safari. It was dark and no flash photography was allowed due to the closeness to the animals. There were no cages, the animals were very close to us, in their natural environments. Because of this I couldn’t get many good photos or videos, but I have my own memory of the Safari to ensure I recollect the trip round Singapore Night Safari. 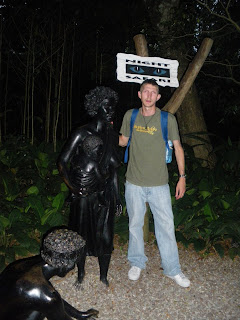 On leaving the main tram station, it suddenly went dark and we were confronted first up to the open sighting of Himalayan Tahr on the left hand side. Further up and round on the right were Markhors and Mouflons. Both grey animals with horns or antlers. Next up was the unusual sighting of one legged flamingoes sitting calmly in a body of water in front of hyenas. What was most surprising was the animals all appeared timid, none of them even came near our carriage, despite the fact they were all out in the wild. Every now and then the tram would stop and allow only the best night cameras to get a good photo shot, I decided there wouldn’t be many photos for the memory on this one, simply my memory itself. I took about 10 blurred photos of darkness without any animals. 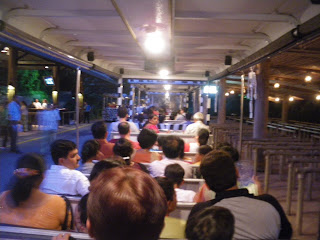 Some smaller animals were visible on the night safari, in an area called “Fishing Cat Trail” (a walk which could be done to see the Fishing Cat). These included the bizarre “Flying Fox”, some Otters and Marsh Birds. We were then given a feast of Asian animals on route to the “Leopard Trail”, this included hearing and seeing the Indian Wolf and the Greater Asian Rhinocerous. The best thing was we were just staring straight at their animals. No fences, cages or anything to separate between us and the animals. A great experience. On round we encountered antlered Barasinghas, Sambar Deers and we were nearing the wild cat section, for me the best part of it. 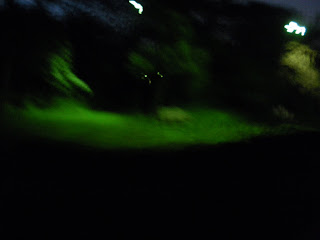 As we passed some of the park rangers, and waved, we crossed into an area entitled “East Loop” (we were each given a Night Safari map and guide to the animals before the tram left). Here I saw the Striped Hyenas, not smiling or grining, just sitting peacefully in a muddy grassy enclave. This was the world’s fastest type of creature. Bearded Manes were in full view next on the right as we saw massive Lions from just 20 metres away, with their cubs, and a Lioness. The full Lion family had their golden fur on full view. It did feel like a real safari, it didn’t feel like just a zoo. We got to our first and only tram stop, at East Lodge. The chance was there to do the walking trail, the “Leopard Trail”, and of course normally in life I’m up for everything and we’d have done it, it was the same price and we could have walked that and got on a later tram back round. The couple next to us got off and did it, but we were under a time restraint that night, due to being booked on the 10 pm KTM EKSPRES SENANDUNG MALAM, a Night Sleeper Train from Singapore Keppel Road direct to Kuala Lumpur Sentral. It was already almost 8 pm, so we had only 2 hours to finish the Night Safari, get a bus to Ang Mo Kio MRT station, get an MRT back to Kallang, walk to the hostel, grab our stuff and get in line for Passport Inspection and 2 border controls before leaving Singapore. So we had to skip the walking trail “Leopard Trail.” 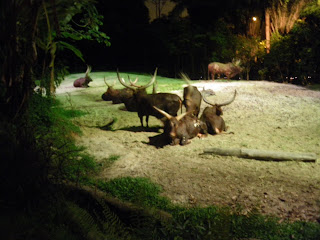 It wasn’t that bad, as we did see some Clouded Leopards from the tram. In their glory, in their natural habitat. I struggle to find the difference between all these wild forms of cat. Hyenas, Leopards, Servals, Jaguars…Lucky the guide had them all listed by name, in English. Lucky English is the main language in Singapore as well. Two exciting animals were to follow. The world’s tallest mammals, the giraffes were obvious to see their necks towering over a darkened Singaporean Sky. If I’d been allowed a flash, or had a decent camera, a night shot here could have featured the giraffes, tall trees, a dark blue fading sky and the pining moon in wildlife altogether in the middle of Singapore. Next to giraffes, stood several Zebras. They all looked amazing. This could be an African Safari, for all I knew. Bears were up next – Sloth Bears according to the map. Oh, and just at this point we could see a large lake in the background, behind the Giraffes and Zebras, this was actually the Upper Selectar Reservoir.

Continuing on round in the East Loop, Servals (wild cats which looked like Leopards as far as I could tell), Lechwe (antlered and deer like) and more Hyenas (spotted ones just to confuse me, the previous ones were striped). You could see them all but we were moving fast, we couldn’t disturb the animals. We had to move fast. Large scary animals on the left were the dark Buffalos and Hippopotamuses. They were drinking water and making more noise than the others. Maybe they saw our dark Night Safari Tram under the twilight of a few lanterns. There were too many animals to take in, sometimes the tram just kept going just after we had only glimpsed the animal. 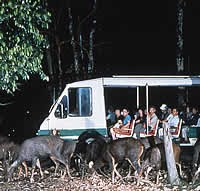 Another one of the trails was the “Forest Giants Trail”, where we glimpsed a tiger briefly and a Babirusa. That looked to me like a Rhinocerous or Hippopotamous. I’m probably wrong. The elephants were the most clear and visible creatures of the safari, on the West Loop and final section. A video of them actually came out reasonably well. I think there were about 4 elephants. The biggest surprise and definitely the scariest animals I have ever seen came next – GIANT RATS. These looked like rats, but were bigger than humans, they’d eat anything, they were crowded and huddled round some leaves and food and looked exactly like massive scary rats. I was within 5 metres of them. The Night Safari Tram Tour was coming to an end, Giant Anteaters and Gaurs looked like the final creatures. On dismounting the tram, we saw lots of Ankole Cattle. Time was short and we sampled some of the atmosphere and visited the gift shop as we waited for our bus, we went back the same way. 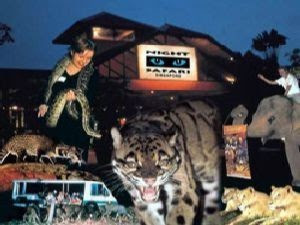 The only real regret from Night Safari was the time element, if we weren’t in such a rush to catch the Sleeper Train, we’d have done all the walking trails, where you can stop more often to enjoy the animals and we’d have gone to the animal shows and had dinner and drinks there. Life ain’t everything you want. But it was fantastic to actually do a Night Safari. Thoroughly enjoyable, maybe just too fast and over too quick. If you’re in Singapore, take more time than we did, and do it all. On leaving Singapore Night Safari, we had 1 and a half hours to get onto the train via hostel. We did it, just…


THE BUS TO THE NIGHT SAFARI: