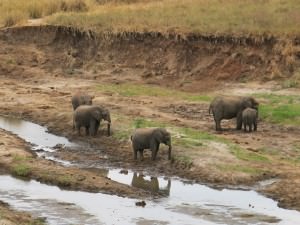 Elephants down by the water at the end of our day at Tarangire.

My recent safari tour in Tanzania saw us visit three massive national parks, and this, the first installment comes from Tarangire National Park. I had been on some safaris before, but none of them really on a grand scale to be honest. I’d been to Singapore Night Safari, watched monkeys in Borneo, seen a load of Australian animals and been to safari at Yala National Park in Sri Lanka (yet to write about it). So this was one hotly anticipated trip for me. I was there on a media tour with excellent safari company Shadows of Africa and was delighted to be on safari with Raymond and Annette, two fellow travel bloggers.

We went on tour with Shadows of Africa!

The road to Tarangire was long and enjoyable. We passed through many Maasai Villages on route and around lunchtime, we made it to the entrance gate for Tarangire. My well travelled Northern Ireland flag got an airing before we had time to look around the visitor’s centre.

Then the roof of the jeep went up and we posed for our first safari tour photo as a team. Next up: Safari time!

As I recall (and no doubt my travel buddies will confirm) the first animals we saw were impalas, wildebeests and zebras.

Impalas graze in Tarangire – our entrance to the park.

To be honest, at the start the animals were coming thick and fast and left, right and centre. There was no shortage of wildlife sightings here!

A wildebeest darts in front of our jeep at Tarangire.

Annette made a list of every new species of animal we saw, and while I tried to keep up with my notebook, the road got a bit bumpy for it!

La Paz eat your heart out – here’s a real zebra crossing in the Tarangire!

I was surprised at the sheer number of zebras we saw at the start – and for once a REAL Zebra crossing. The locals in Bolivia’s La Paz would be jealous as hell.

Enjoying the view of the Tarangire National Park, but this isn’t about me – it’s all about the animals. Time to move over…

I could be really descriptive into the details of every animal, but for once on my blog, this is a post for photos and the animals have to take centre stage. Yes, I’m going to have to move over and give them some coverage.

OK one last photo of people before you get the animals – Annette and Raymond join me here on Safari!

I have to mention our awesome Safari jeep driver Timo of Shadows of Africa. Basically every time we encountered a new animal, or even species of animal, he knew EVERYTHING about it.

A red and yellow barbet – birds a plenty at Tarangire.

We learnt a lot through Timo, what he didn’t know about animals, isn’t worth knowing. He knows the average size, weight, lifespan, pregnancy periods. He knows which are male and female most of the time at first glance.

A warthog crouches down to eat grass – it’s front legs are too long so it bends.

When we see warthogs crouching down ridiculously, we are told their front legs are much higher than their back legs, so they need to crouch to eat the grass. They are odd looking creatures!

Our massive lunch in the Tarangire – including peanuts, chicken and pasta.

Lunch came half way through the safari at a quiet spot where we could stare down at some elephants. The lunches on my safari tour were like feasts! Honestly I could never finish them and usually had the apple and nuts later on, or gave them away to local Maasai children. Before lunch we hadn’t yet seen giraffes and then this fellow popped up!

A curious giraffe in Tarangire. We got pretty close to the animals.

The giraffe cannot be hunted and killed by anyone in Tanzania. It is the national emblem and appears on the banknotes and some stamps.

We also seen a load of baboons in a tree.

There were a few types of monkeys and baboons, in fact at one point we closed the windows as they sometimes jump into the jeeps looking to steal food! Then came one of the funny and obscure moments, introducing the velvet monkey, who has the most colourful genitalia of any creature surely!

Introducing the velvet monkey – check out his blue testicles and red willy!

Sporting unshyly a blue scrotum and a red willy with blue skin, these creatures sure get some attention. Plus it’s easier to tell when you see a male. There’s a lot of these about near the entrance – but beware – they’ll grab your food and drink.

More elephants by a tree taking off the bark to eat it!

A few more elephants and our first lion spotting of the trip followed and we were done with Tarangire. This was a great park to start with as it builds you up to the bigger events – The Serengeti and Ngorongoro Crater! After a busy day at Tarangire we headed to the superb Osupuko Lodge for the night where we received a warm welcome. 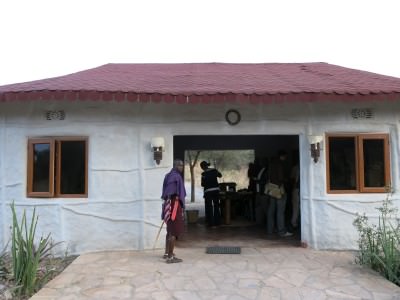 After a day of safari in the Tarangire we arrived at the cosy Osupuko Lodge for the night.

* I was on safari in Africa as a guest on a media tour with Shadows of Africa a company which I completely recommend. But as you’ll know on my blog, everything I write on here is my own personal opinion from the heart of a globetrotting Northern Irishman and is not influenced by the fact I was on a media tour.

Here are a few of my videos from Tarangire: