I’m delighted to feature Raymond Walsh on here. Raymond runs the website Man on the Lam, which has just had an awesome facelift as Raymond continues his journeys and aims to make it to his 50th country!! Also, Raymond is a friend from my travels too as we went on an awesome safari together in Tanzania in 2013. 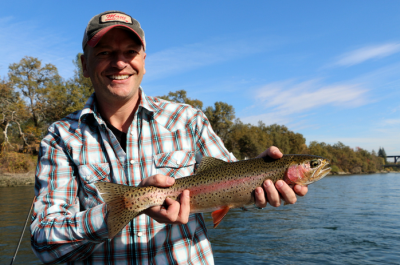 I’m from St. John’s, Newfoundland, Canada. It’s the wettest, windiest, foggiest, and snowiest place in Canada. Lovingly referred to as “The Rock.”

I’m about to hit country number 50! I’ve been to 49 countries so far – mostly Europe, the Middle East, Asia, and Central America. 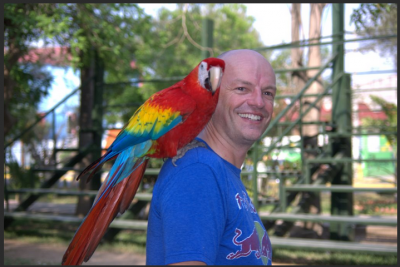 I’m in Monte Estoril, Portugal – about 30 minutes outside of Lisbon.

That’s always such a hard question, each place holds significance for some reason or another. But if I’ve gotta name names, I’d go with Thailand (for the food and the beaches), Indonesia (for the diving and the people), and Jordan (for just being plain old awesome.) 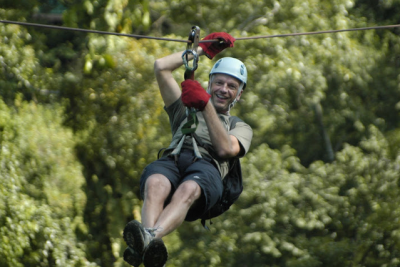 World Travellers: Raymond Walsh AKA Man on the Lam ziplining in Costa Rica.

There have been so many! Flying a fighter jet in Las Vegas, taking a helicopter lesson in California, learning to scuba dive in Borneo – all were pretty spectacular. If I had to choose one though, I’d say spending December 31, 1999 at the pyramids in Egypt. There was such a great vibe there because of all the doomsday crackpots.

The first time I ever took an overnight bus it struck and killed a woman on a motorcycle. The reaction of one of the bus passengers made me sick. It wrote about on my blog.

I got lost in Luxembourg. It was the year that Luxembourg was the Cultural Capital of Europe, and I was camping with a guy I met from Boston. We went into town for the fireworks display and missed the last bus back to the campsite. We ended up trying to walk but just got more and more lost, clamoring through forests and over fences, finally ending up on a highway to France. We eventually decided budget be damned and opted to hail a cab. I mean, who gets lost in Luxembourg? 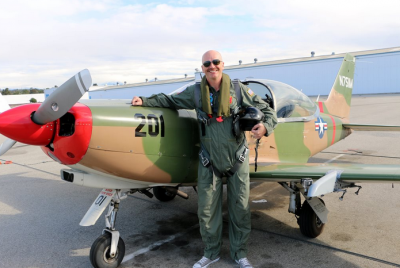 I’ve had a few of those. I got a bug in the lining of my stomach in Guatemala and lost 40 pounds, I had an allergic reaction to anti-malaria medication in Indonesia and was convinced I was going to die, and I had a weird staph infection when I was in the Philippines and ended up in quarantine when I got back to Canada.

I was a gardener in Israel for a few months. I worked for a retired fighter pilot who told me stories of the wars he was in. I should add that I knew absolutely nothing about gardening. 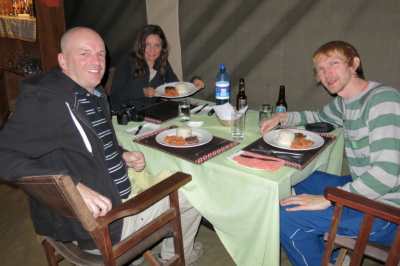 Raymond Walsh and I eating together on a night in the Serengeti in Tanzania.

Advertising on my site, freelance writing jobs, and I hawk some of my photos to news outlets when I can.

Be not afraid. Most are there to help, not to harm.
Be not judgmental. It’s not wrong, it’s just different.
Be not an ass. Remember, you are a guest.

I’m deeply into “slow travel” right now, so I’m basing myself in Portugal for a few months while I work on my site. The plan for 2015 is to go non-stop travelling for a year. Those ‘Stans are going to see themselves you know.

Believing life is not a sentence, Raymond Walsh left behind his cubicle-shaped cell to travel and explore and encourage others to do the same. He writes about escapes and escapism on his site Man On The Lam.

Man On The Lam: http://manonthelam.com/

Thanks to Raymond Walsh for being the latest in my series of World Travellers! If you travel the world and run a travel blog or are a travel writer, please get in touch, you can be featured (there’s a HUGE waiting list at present), either e-mail jonny (at) dontstopliving (dot) net or head to my contacts page and get connected! You can also subscribe to Don’t Stop Living by filling in the form below! Safe travels!

6 thoughts on “World Travellers: Raymond Walsh AKA Man on The Lam”