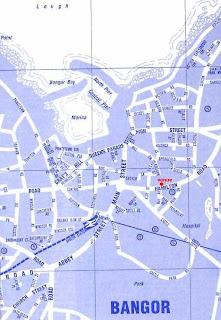 I come from Bangor in Northern Ireland. Its a medium sized town in my homeland. Bangor is just a name, and is hardly unique. There are many “Bangor”s all over the world. I know for a fact there is one in Wales, Republic of Ireland and the USA (the capital city of Maine, I believe), but I didn’t expect to be visiting an obscure farming village called Bangor. 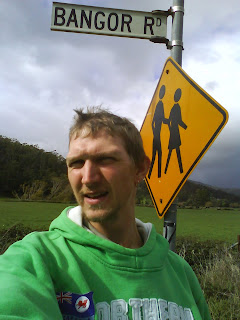 But there I was, one Saturday afternoon in April 2010 on my day off on a quest to find Tasmania’s “Bangor.” I heard about it by chance. But actually without shitting you – there are TWO Bangors on the island of Tasmania. The first one is not even a town or village, but actually just a single farm. I saw it on the Tasman Devil Peninsula in my first week on Tasmania. A colourful decorative sign with images of animals preceeded the farm known as Bangor. 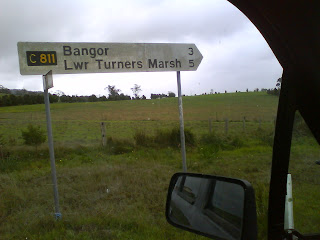 But the second Bangor in Tasmania is slightly bigger and prominant enough to show up on maps. I was in Longford Library one day in April 2010, a place where I’d visit on my half days, early finishes or very occasionally on a day off. The internet use was free there and the staff were amazingly friendly. It was in that very library where I booked online and made the phone call to confirm my trip to Antarctica was booked. However I had to register as a member of the library to use it for free. When I registered, the lady took my Driving Licence and noticed the “Bangor” address on it (my parent’s address, and actually a house I have never officially lived in, although my UK mail normally goes there). She said “oh have you heard of the Bangor Tram?” and “There’s a Bangor up towards Georgetown.” So I was intrigued and wanted to find it. For what reason I don’t know. Something to do I guess. 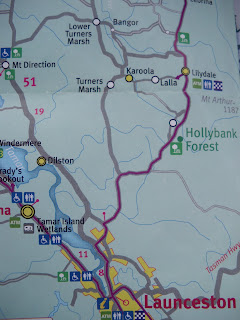 I visited the Launceston Tourist Information Office the next day, on my trip to Cataract Gorge and Lonny (locals nickname for Launceston) and there I got a few maps and asked the ladies where this Bangor was. None of us could find it on the map at first, but then I spotted it. Directly north of Lonny, taking the B81 through Rocherlea and then the B83 through Turner’s Marsh, where Bangor was shyly situated on a smaller “C” road in this Tamar Valley region of Tasmania. 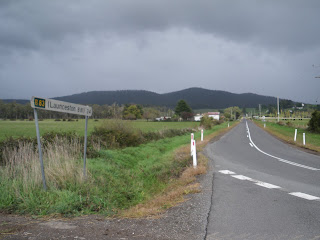 So that afternoon I went there. I didn’t have to look hard to find it. Just past Turner’s Marsh I saw the Bangor Road, and a sign indicating that Bangor was just 3 kilometres away. It was the C820 which was off the C811. I stopped for some photos and videos there. Some locals in their yoots looked confused as to why I was stopped in the middle of the countryside taking a photos of a street sign! So anyway I carried on up the road, passing a few farming houses and cottages. Then suddenly I thought to myself, “I wonder was that actually Bangor I just passed?” Then I got to a T-Junction which indicated that Bangor was now 2 kilometres back the way I had came. Yes, I had missed Bangor! 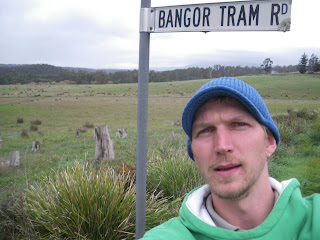 Before I went to turn round I took a right and went down to the next junction to see if there was anything there. And low and behold was another sign with Bangor written on it. This time, a confusing “Bangor Tram Road”, now I recalled the lady in Longford Library said there was a Bangor Tram. Yet there was no talk of it in the tourist information office, nor would a “Google” search on such a thing bring up any results. But apparently there was once a Bangor Tram, here in Tasmania. With no proof except a lonely white metal street sign, which bore the words in black writing “Bangor Tram Road.” I still enjoyed getting my photo taken by Bangor Tram Road. There ain’t even a tram in the Bangor I come from! 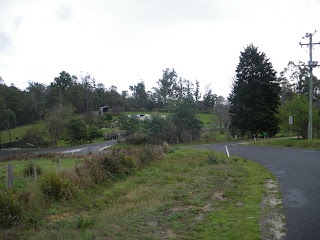 So it was back to find Bangor. In the meantime the local radio station, Triple J, I think played a “new” song by Blur! It showed how long I had been away from the UK – I had no idea Blur would release something else. The song was quite catchy and I spontaneously decided to video the clip while the song was on. And how easily you could miss it. A small junction and a few farms and that was it. 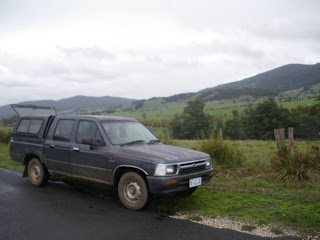 Even so, I turned into the only street, which was the focal point of this “settlement” of Bangor. Up in the hills, deep in countryside, farming in northern Tasmanian wilderness lies the lonely unknown village of Bangor. I parked and walked all around. 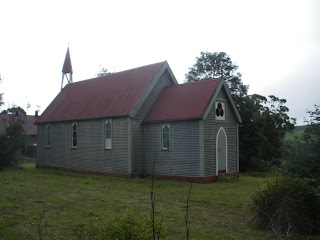 A church which had survived decades of horrible weather, and looked like it hadn’t been used in years was the main attraction of the village. There was a graveyard, but this lonely church stood out. I pondered in the drizzle for a brief moment. And then the sun came out. I walked down to the t-junction and got my photo took by the only Bangor sign that remained. It looked like there had been another Bangor sign on the other side, which had been removed. I wondered when and by whom. 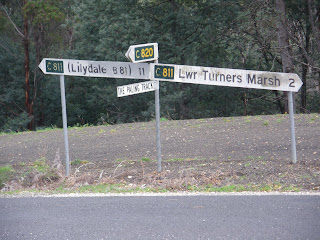 At the T-junction the C811 (the main Bangor Road) met the C820 (a road called The Paling Track, apparently). Behind us lay Lilydale, and in front (where I’d already been) was Lower Turner’s Marsh. On another signpost, Pipers River, was apparently the next settlement along. There probably ain’t a piper there, or even a river. 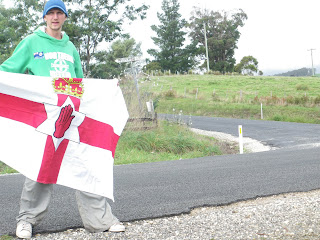 I took pride in my own solitude of getting my Northern Ireland flags out (both of them – the national Ulster Banner flag and also an Our Wee Country flag, which my brother Marko got me for Christmas back in 2006 – that flag he bought me has been photographed in more than 22 countries now). 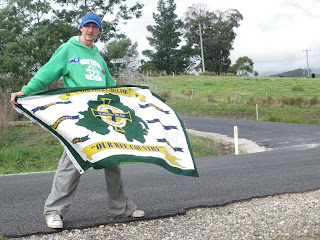 I found a ledge for the self timer and took a few photos, careful to get the “Bangor” sign in the distant background, so you knew I was actually there. 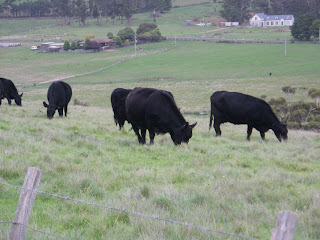 One car passed by while I was there. And a few cows moved closer to a fence at one point. They seemed to be enjoying eating the grass in their Bangor field. Another car came up the hill as I was leaving and a lady turned into one of the “farmhouse driveways” in Bangor. She was the only Bangor resident I saw. I didn’t say hello. She had the window up and was further away. I didn’t feel rude.

Another street sign duo reveal that “Tunnel” is 8 kilometres away and “Lilydale” is 10. If you take photos of these things in an area, you know the area can’t be entirely exciting. I was excited. 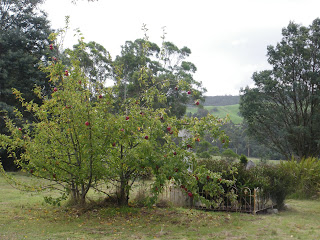 I photograph a delightful Apple Tree in the grounds of the Church, and notice that the letterbox to one of the houses/farms is actually in the shape of a frog. 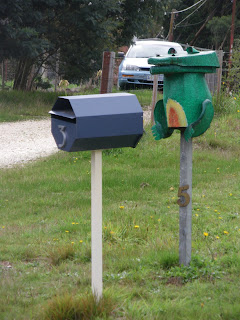 That frog letterbox is the most scenic tourist attraction in Bangor. I’m not croaking. And you’re not being toad along. It was quite ribbeting.

I never met anyone from Bangor, nor did I see the alleged Bangor Tram. I wonder if it exists. As one Bangorian could easily say to a fellow Bangorian (from a settlement bearing the same name but not the traits) “it’s the same world everywhere you go.” 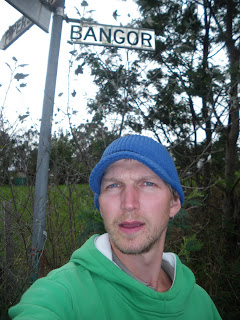 Actually that was Neil Finn’s line, spontaneously at a one time Crowded House concert. If I ever take the weather with me. Pray it’s not a Bangor climate. We use our beach for walking dogs, not for getting a sun tan.
If you ever see it, can you please get me a first class ticket for the Bangor Tram. It’s one hell of a journey…
What is it? – A settlement called Bangor (an old farming hamlet/village)
Where Is It? – Northern Tasmania, off the C811 then onto the C820 somewhere between Karoola and Lower Turner’s Marsh
What to do there – Get yer photo took by the Bangor Sign, stare at the cows, dander around aimlessly
Transport needed – You have to drive there. You’d get killed walking. And there ain’t no Bangor Tram.
The only mention of a Bangor Tram I found – http://www.railfan.net/lists/rshsdepot-digest/200408/msg00047.html
Tourist Attractions – An apple tree, the Bangor sign, the hope of seeing “The Bangor Tram” (which possibly doesn’t exist), a derelict church (with an even more derelict graveyard(, herds of cows and a farm which has a letterbox which looks like a frog
Population Estimate – I reckon about 15. Given there were 3 main farms and some other farm type buildings around
Famous people from Bangor – Keith Gillespie (Played in Champions League for Newcastle United), Zoe Salmon (Hosted Blue Peter), Christine Bleakley (Hosted The One Show), Gary Lightbody (Sings in a band called Snow Patrol), Colin Bateman (Writes Books), David Trimble (Former Leader of the Ulster Unionist Party, and First Minister of Northern Ireland just a decade ago)
THE NEW BLUR SONG, FOOL’S DAY:
DRIVING OUT OF LAUNCESTON SEARCHING FOR BANGOR, TASMANIA:
PALING ROAD AND BANGOR SIGN, TASMANIA:
BANGOR TRAM ROAD SIGN, TASMANIA:
DRIVING TO BANGOR, TASMANIA WITH BLUR SONG ON:
IN THE “CITY CENTRE” OF BANGOR, NORTHERN TASMANIA:
BANGOR ROAD JUNCTION, TASMANIA:
BANGOR, NORTHERN IRELAND:
(THAT’S MY FAMILY’S DOG “ROCKY” IN THE CAR)
BANGOR, WALES:
SNOW AT BANGOR, MAINE, USA:
Join 15,017 Monthly Readers! If you enjoyed this article and LOVE travel and SAVING money, get e-mail updates from Don’t Stop Living – a lifestyle of travel! (It’s Free) 😉 Jonny